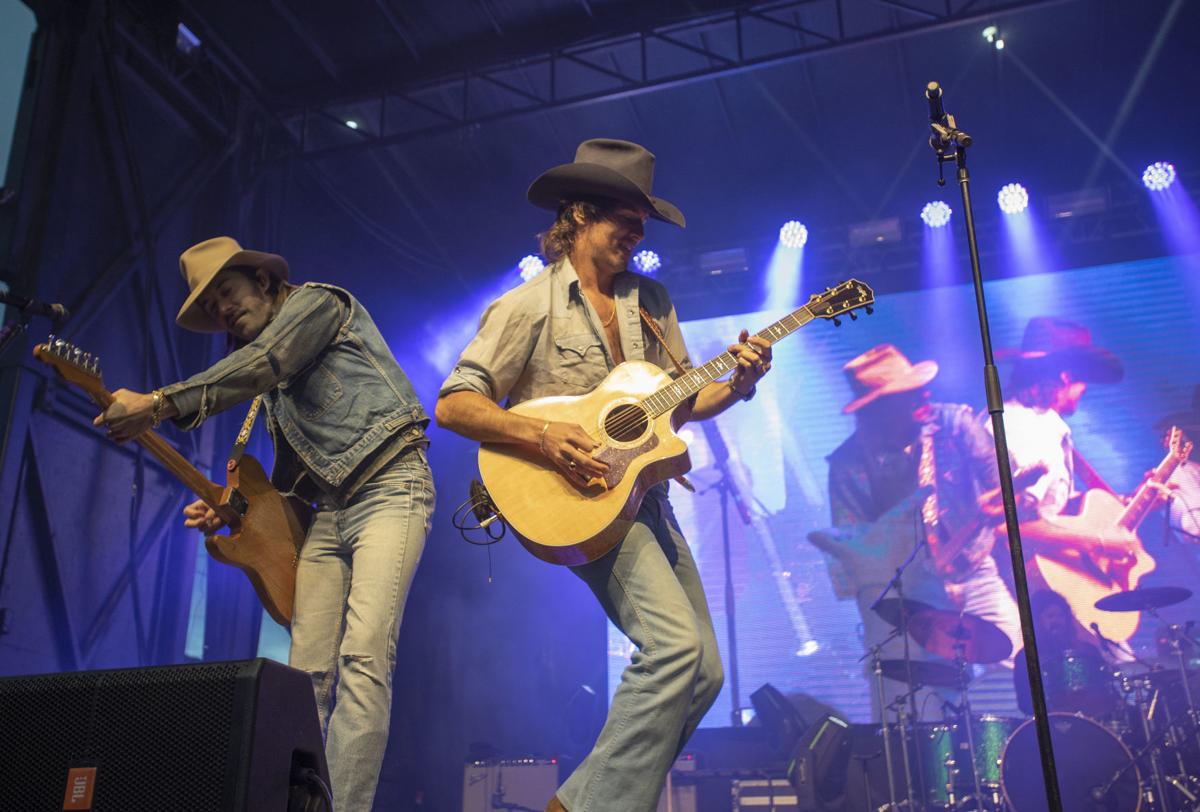 Midland’s Jess Carson and Mark Wystrach rock out during their headlining performance of the Million Dollar Music Fest. 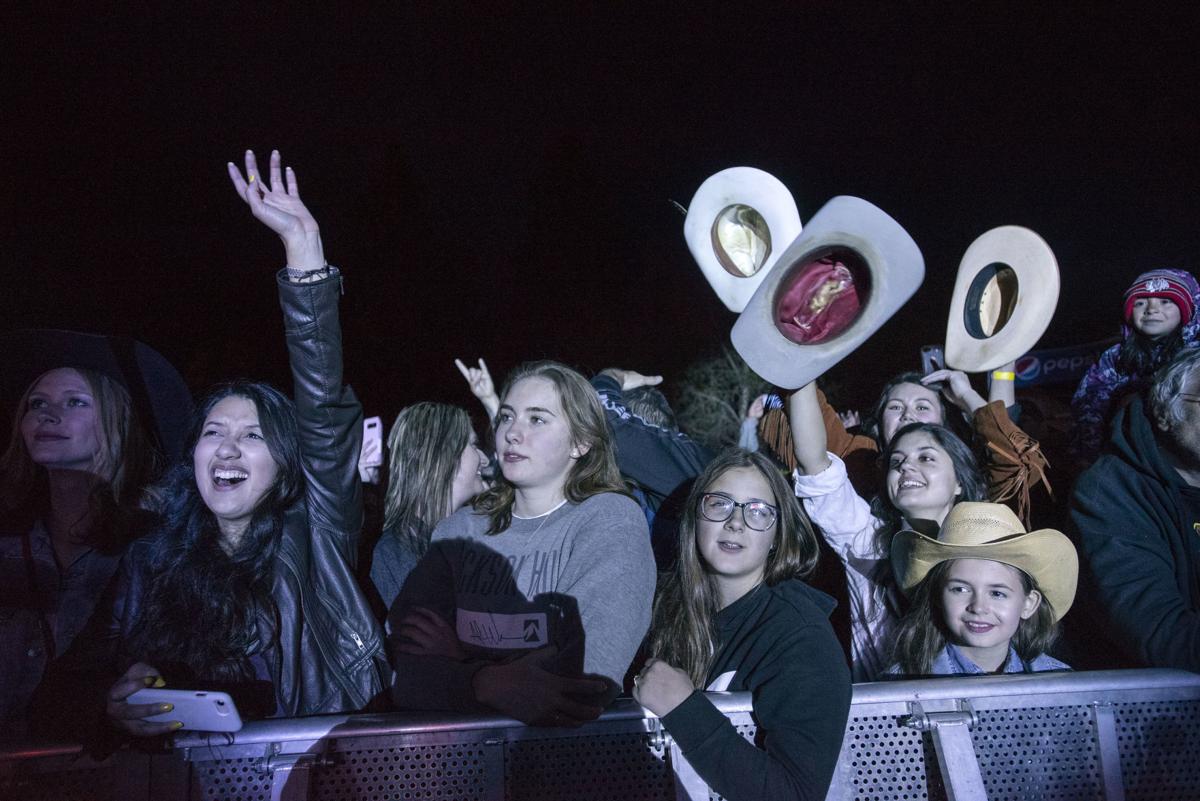 Midland fans cheer for an encore near the close of the inaugural Million Dollar Music Fest on Sunday.

Hundreds of people crowd the southeast corner of the Jackson Town Square to watch Midland.

Midland’s Jess Carson and Mark Wystrach rock out during their headlining performance of the Million Dollar Music Fest.

Midland fans cheer for an encore near the close of the inaugural Million Dollar Music Fest on Sunday.

Here’s what the guys in Midland want you to know.

They’re working on their sophomore album (set to be released at the end of the summer), but they don’t want to announce the name yet. There will be 14 songs on it. It was recorded, in part, at Castle Recording Studios, a Nashville-area Al Capone hideout turned recording studio. “Mr. Lonely” is the new album’s single, and they’ll release a bunch of other new songs throughout the summer.

Guitarist and singer Mark Wystrach called their new work “a reflection of a band that’s just been on the road and working really hard for five years straight.

“[We’ve] grown a lot as songwriters, as musicians, as producers, as a vocal group,” he added. “It’s a lot more dynamic.”

The band just closed its inaugural headlining tour with a performance at the Ryman Auditorium in Nashville. They followed that up with an opening performance for Garth Brooks in Pittsburgh just over a week ago. The members also think they’ve put the whole authenticity controversy, in which some critics derided them for rising up the country ranks before they’d really cut their teeth (a possible relic of Wystrach’s past work as a Calvin Klein model as well as bassist Cameron Duddy’s tenure as a videographer for Bruno Mars), well behind them.

“I think that debate has been put to sleep,” Wystrach said.

“When we first came in we sounded more country than anyone else has in a long time, and I think some of that was part of it.”

Sunday, after all of those ups and downs, Wystrach, Duddy and Jess Carson (the trio’s third founding member and guitar player), seemed right at home sitting in The Wort Hotel before their performance at the Million Dollar Music Fest.

And that might be because, in a way, they were.

If the guys’ Sunday night performance was the first time you’ve heard of (or seen) Midland, here’s the back story.

The three musicians got together for Duddy’s Teton County wedding in 2013 (the bass player had visited Jackson throughout his childhood) and started playing music on Duddy’s mother-in-law’s porch in Alta. The Knotty Pine Supper Club in Victor was the venue for their first show, a rehearsal dinner turned talent show that saw Wystrach, Duddy and Carson play a cover of Chris Isaak’s 1989 ballad, “Wicked Game.”

They didn’t do that well in the talent show (“We didn’t even come in the top 10,” Duddy said), but now, as with the authenticity controversy, that seems to be a thing of the past. In 2018 Midland was nominated for a Grammy Award for Best Country Duo/Group Performance for its first-ever single, “Drinkin’ Problem.” The musicians have been hitting the road — hard — and have had the opportunity to rub shoulders with some of the biggest names in the industry.

Told it was raining just before he and the band took the stage, Wystrach was deadpan.

“Midland makes it rain,” he said.

The guys in Midland certainly have bravado. Wystrach dedicated the first new song they played, “Playboys,” to all “the women in our lives.” He made a public service announcement for “all the gentlemen in the crowd” before playing “Mr. Lonely” (“You better treat your ladies right or Mr. Lonely’s gonna show up.”). And, while the band played the riffs from Z.Z. Top’s “La Grange” (the guys never played the cover, though doing so is common in the band’s performances), Wystrach introduced Duddy: “You’ve seen him, you’ve given him dirty looks in line at the coffee shops when he was a teenager — he asked you to buy beer for him and his brothers when he was 17 years old.”

Duddy, for his part, recounted two cowboy maxims someone he called “Cowboy Steve” told him at his wedding: “Don’t go to bed angry, and make love as often as possible.”

All in all, Midland treated the crowd to a roaring performance, complete with three unreleased songs off its upcoming album, “Playboys,” “Cheating Songs” and “Fast Hearts and Slow Towns.” The highlight, though, was the encore. The guys ended with their cover of “Wicked Game,” throwing it all the way back to their first show at the Knotty Pine and showing that, despite all their bravado, the guys in Midland seem to have a soft spot for this valley in western Wyoming.

Before the show, the members were clear-eyed about their love for the valley, waxing poetic about how they’ve seen Jackson change, even in the past six years. For them, the Million Dollar Cowboy Bar seems to be a home of sorts. When asked whether Midland or the Cowboy had the idea to get the Million Dollar Music Fest off the ground, Duddy said it was a little bit of both.

“There will always be a chicken-or-the-egg question there,” he said, referring to the relationship Midland is building with Jackson’s iconic watering hole. “We can take partial credit only in the way that we’ve — ”

“Racked up some pretty significant bar tabs,” Wystrach cut in.

“Paid for some of the chandeliers probably,” Duddy said with a laugh.

The Cowboy was where Wystrach and Carson, who didn’t know each other well before Duddy’s wedding, bonded after picking a fight with some other guys in the bar (“Just awesome Cowboy s--t,” Duddy said). But for the guys in Midland, the Cowboy isn’t just a place to party.

It’s one of the last of a dying breed, a honky-tonk that’s still standing while cities like Nashville are tearing down, as Wystrach said, “every great honky-tonk, every great bar where some of the greatest songs were inspired left and right.

“Some of the greatest things in our lives happen in those places,” he added. “They really are kind of sacred spaces.”

After telling the story of the fight he and Jess got into at the Cowboy once again onstage, Wystrach did promise to come back “every single year,” if the crowd wanted them to and, based on its response, it did.

At the Wort earlier that night, Carson drove that promise home.