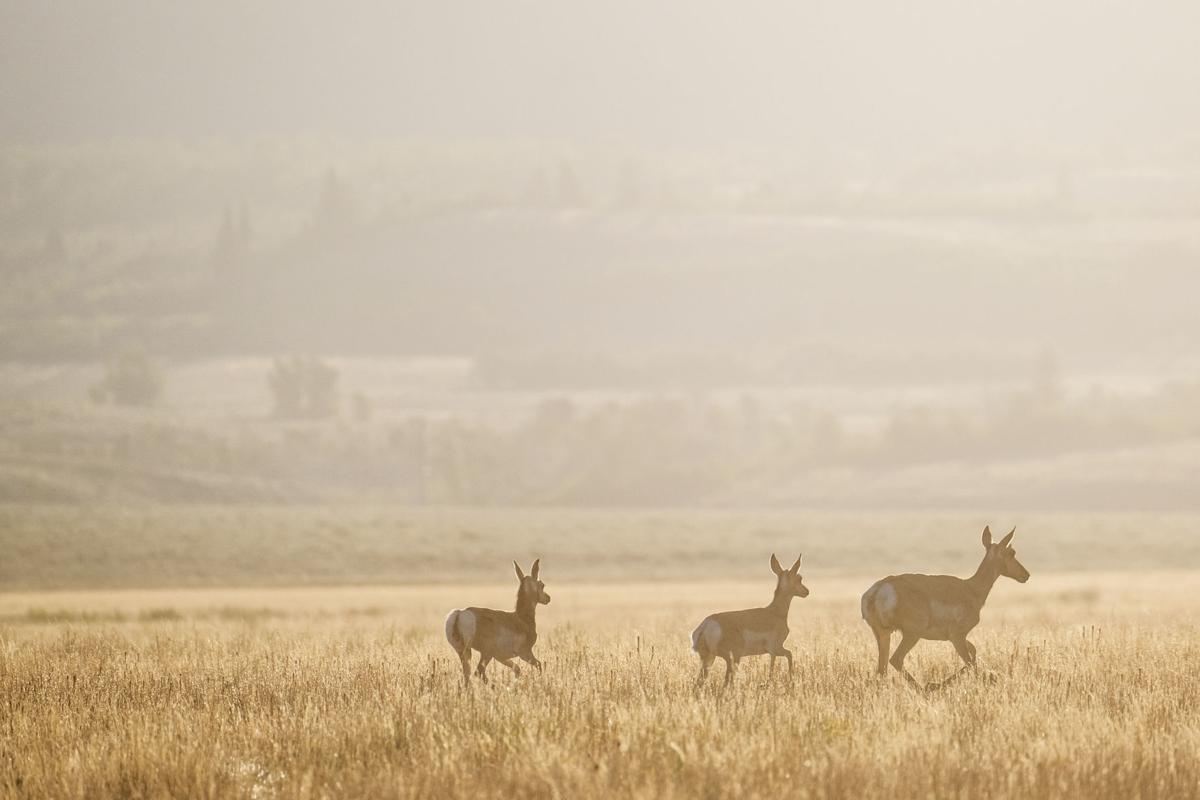 A pronghorn doe and two of her fawns sprint across Antelope Flats in Grand Teton National Park. Jackson Hole’s pronghorn migrate more than a hundred miles through the Gros Ventre and Upper Green River valleys to their winter range in the sagebrush sea southwest of Pinedale and reverse the migration back to Jackson Hole for the summer season. 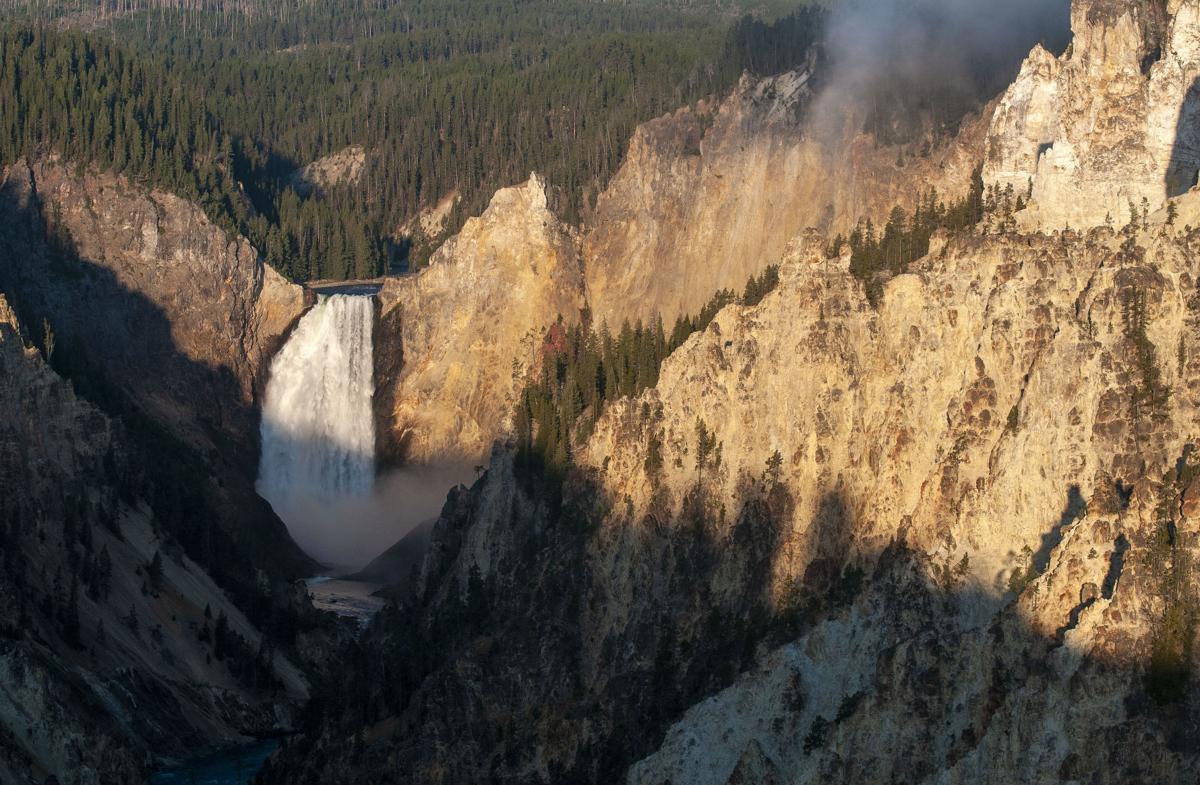 The push to preserve the necklace of wild, mountainous land circling Yellowstone National Park started almost as soon as the homesteaders arrived.

As white people started filtering in and staking claims, pressure built on public lands and wildlife. From the get-go there were calls for protection. Gen. Philip Sheridan, in particular, crusaded for military control of the Greater Yellowstone region, advocating an eastward and southerly boundary expansion of the park to better protect elk and bison. Teddy Roosevelt, when he was president of the Boone and Crockett Club, championed the same thing. It worked. Yellowstone’s boundaries never stretched much themselves, but by 1891 a 1.2-million-acre forest reserve — a forerunner of the Shoshone National Forest — was created off to the east. A decade later there were 6.6 million acres of forest reserves in the area, effectively quadrupling the size of Yellowstone.

The rest is history. Nine national forests were spawned, though most later merged. Grand Teton National Park was created and later enlarged. Several wildlife refuges were born. Much of the most arid, least tillable land on the outskirts of the region were kept in federal ownership and eventually turned over to the Bureau of Land Management. Lower valleys in the region were claimed and have mostly remained private land. Depending on how the boundaries are drawn, today there is a patchwork of 19 million to 22 million acres of terrain spanning three states and 25 counties that is often referred to as the Greater Yellowstone Ecosystem.

It’s a phrase that was popularized generations after Sheridan was tromping around, although even in his day, some 130 years ago, he referred to the region as the “Greater Yellowstone” while espousing the idea of a larger, protected landscape. It took a while to tack on “ecosystem” — meaning a biological community of interacting organisms — to create the three-word phrase. The first use of “Greater Yellowstone Ecosystem” that University of Utah law professor Bob Keiter is aware of came from John and Frank Craighead, the famous grizzly biologist brothers who called Jackson Hole home. “It was used by the Craigheads, in conjunction with their 1960s grizzly bear study,” Keiter said. “Then it was picked up by the conservation groups.”

Keiter is one to know the history. Early this year he completed an exhaustive 182-page review, “The Greater Yellowstone Ecosystem Revisited: Law, Science and the Pursuit of Ecosystem Management in an Iconic Landscape.” The analysis was printed in the Colorado Law Review, which published a Keiter review on the same topic 31 years ago. At that time the idea of the Yellowstone ecosystem had just gained traction with the public.

There were several catalyzing events that led to the ecosystem becoming everyday lingo, according to Keiter. In 1980 the National Park Service released a “State of the Parks” report, which identified threats external to park properties, including Yellowstone. Around that time the Yellowstone area’s grizzly bear population was in the spotlight, and some members of Congress and conservationists sought a common set of conservation policies that transcended jurisdictional lines. Last, an influential Montana environmental activist, Rick Reese, wrote a book about the ecosystem concept, “Greater Yellowstone: The National Park and Adjacent Wildlands.”

In the late 1980s a federal collaborative known as the Greater Yellowstone Coordinating Committee attempted to strengthen the ecosystem concept and pursued giving it some regulatory teeth. That committee, which dates to 1964 and still meets today, is composed of all the federal land managers in the region plus the U.S. Fish and Wildlife Service. At the time there was congressional concern about the fate of Yellowstone grizzly bears, and the coordinating committee launched a high-profile “Vision” exercise to establish region-wide management goals and planning protocols. “That scared some people,” Keiter said, “and the politics were such that during the George H. W. Bush administration they ended up killing it.” Afterward the Greater Yellowstone Coordinating Committee developed a reputation as ineffective, with little influence over the ecosystem.

Some early supporters of the Greater Yellowstone Ecosystem concept lament how institutions have not succeeded in binding the region’s jurisdictional pieces together through policy. “We ought to try to integrate all this and ask, ‘What policies do we actually need?’ so humans can live in a landscape like this without destroying it,” said Susan Clark, a Jackson resident and Yale University policy science professor. Nitty-gritty management is important, she said, and places like, say, the Cache Creek drainage should have their own specific governing policies. “But,” Clark said, “we’ve been thinking way too small for the last 50 to 100 years.”

A hallmark and often-cited success of the Greater Yellowstone Ecosystem is its wildlife populations, which remain robust and include most of the major species believed to have existed in the region prior to European settlement. Wolves were the only extirpated megafauna, but they were reintroduced via the Endangered Species Act in 1995. Grizzly bears, although never exterminated, have rebounded past recovery goals established by federal wildlife managers. The largest free-ranging bison herd in the world dwells here. Those are only the highlights. “There are enormous, diverse assemblages of 95 mammals, 316 birds, 22 fishes, two dozen reptiles and amphibians, 12,000 known insects — I could go on,” Reese said over the airwaves. “There are 2,100 species of vascular plants. Remarkably, the ecosystem, as we defined the boundaries, remained then — and still does — essentially intact, retaining its full historic complement of vertebrate species.” It’s a land of superlatives, he said.

In many regards the Greater Yellowstone has taken a turn for the better since 1989, when Keiter first wrote of the ecosystem concept. Conventional resource extraction practices that were common in the early days, like mines, logging and gas and oil drilling, have abated, especially in the core of the ecosystem. The national forests have shifted away from a historic focus on logging and mining and toward an emphasis on wildlife conservation, recreation and ecological sustainability. If the Greater Yellowstone Ecosystem had been confronted by only those challenges from its early days the concept would have proved a resounding success. “Thirty years ago,” Keiter said, “I think a lot of us thought if you get the federal agencies on the same page, that would fix everything.”

Stressors and threats evolved, however. Since Keiter’s first review it’s become increasingly clear that the ecosystem’s private lands, which are far less protected, are equally vital to the function of the whole. Subdivisions have built out and housing density in the ecosystem has tripled since 1970, according to a 2018 Andy Hansen study, “Trends in Vital Signs for Greater Yellowstone,” which published in EcoSphere. That added housing stock has fed a booming human population that’s doubled over the same half-century. Both numbers are projected to double again by 2050. “Private land issues are more problematic today than the public land issues, in many respects,” Keiter said. “There’s not a single legal lever that someone can pull to try to improve the private land situation.”

There are other difficult new problems Keiter lists that have emerged over the last 30 years: escalating visitor numbers in the national parks, mounting recreation pressures, the lethal threat of chronic wasting disease to the region’s cervid species and the myriad consequences of climate change. Although Clark looks back at her 50 years in the ecosystem and sees “many, many improvements,” she identifies the same threats. The longtime Jackson resident, who founded the Northern Rockies Conservation Cooperative, also worries that institutional infrastructure is lacking to address the threats, especially on an ecosystem scale. “We’ve got a good county commission here, by and large,” Clark said. “But how are they supposed to interface with the other 25 counties on these issues?”