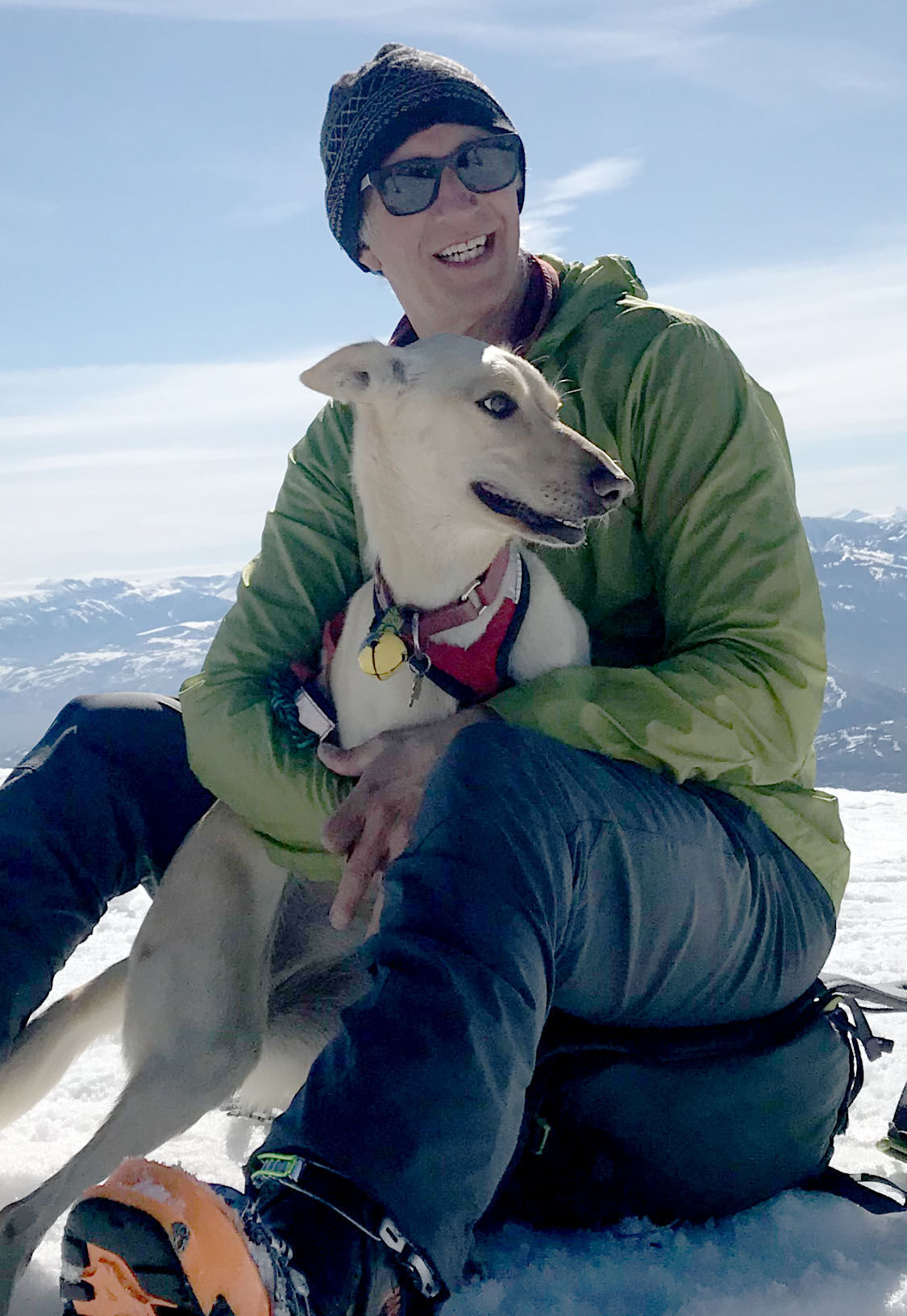 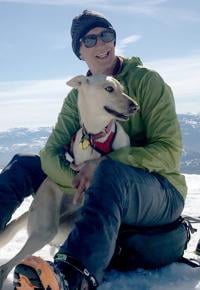 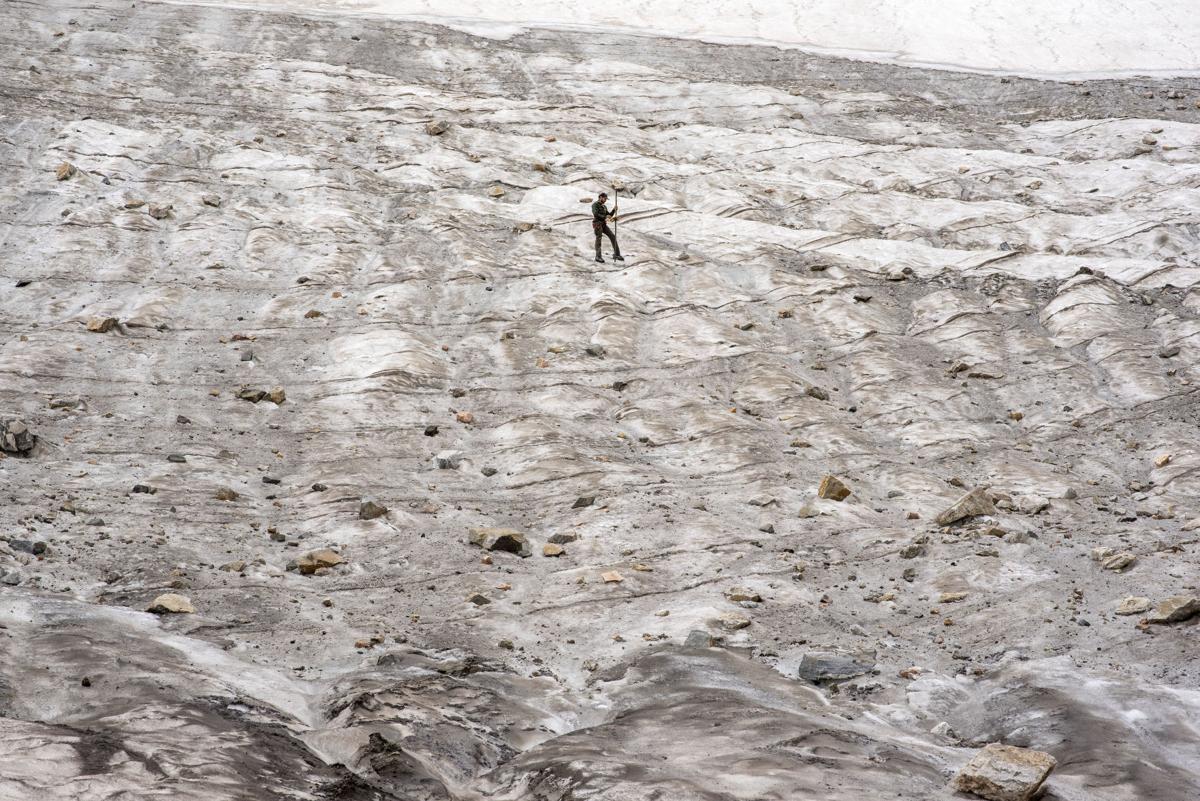 Grand Teton National Park physical sciences chief Simeon Caskey pauses with a GPS device in September 2019 on the Middle Teton Glacier. Park scientists are working to better understand the condition of five of the park’s 11 glaciers.

These are but a few of the dire warnings international and national reports forecast with unmitigated climate change. Two critically important such reports are the Intergovernmental Panel on Climate Change’s “Impacts of Global Warming of 1.5° C Report” and “Special Report on the Ocean and Cryosphere in a Changing Climate.” For those of us who care deeply about the Greater Yellowstone Ecosystem, they raise big questions: What is the level of certainty? How is climate change playing out in the ecosystem now, and what’s ahead? How can we best respond to these warnings in ways that build our resilience to climate change?

From 2017 to 2019 I had the privilege of serving as a lead author in the IPCC “Oceans and Cryosphere” report, with cryosphere being the frozen parts of the earth. The experience was labor intensive and all-consuming. Once completed, I found its conclusions deeply concerning. I was also left with a newfound appreciation for the rigorous standards of an IPCC assessment: This one involved 104 authors from 36 countries, and a review of 6,981 published studies. Some 824 experts reviewed the drafts, providing 31,176 comments. Every statement of fact was qualified to indicate its level of certainty, using a formal evaluation. The findings of the report are not “alternative facts” or some politically motivated narrative. Instead, they are a systematic assessment by world experts of what we know about global climate change — our best account of its impacts and implications for the future.

Chapter 2 is about the planet’s “mountain systems” and is particularly relevant to our corner of the Northern Rockies. Our exhaustive review of the published literature found an overall decrease in the size of the world’s glaciers and a decline in snow cover. These declines have altered natural hazards: Slab and loose snow avalanches, for example, are decreasing in size and frequency, but wet avalanches are trending the opposite direction. Temperature and hydrological changes are having cascading effects on freshwater and terrestrial ecosystems, pushing some species to higher elevations and increasing overall diversity up high. Cold-adapted species, like the pika, fare worse. The report highlights impacts on humans systems, including more wildfire and poorer agricultural output in the West. Outdoor recreational pursuits like skiing and mountaineering are being affected negatively, as are the tourism economies that depend on them. The future under a “business as usual” emissions projection — i.e., the status quo — is not propitious. We can expect a continued decline in snow and ice, an increase in natural hazards, declines in runoff, and poorer water quality. The assessment stressed the importance of reducing carbon emission to avoid increasing the global temperature by more than 1.5 degrees Celsius. Yet even with a reduction in greenhouse gas emissions, many of climate change’s impacts are unavoidable. Immediate action, however, can reduce the severity of those impacts and their hardship on humans.

Greater Yellowstone studies have come to similar conclusions, providing local and nuanced details about the effects of climate change. From 1967 to 2006, three Teton Range glaciers shrunk by 25%, according to a remote imagery analysis. Plant ecologists project the high timberline will likely migrate uphill, while the lower treeline may retreat where it’s dry — or move downhill if it’s wet. Alpine vegetation will likely retreat. Changes in the fire regime are already modifying forest succession and the composition of the boreal forest. The Yellowstone region’s grasslands will likely change in a warmer world, negatively affecting ungulates like elk. Changes in snow cover are likely to reduce large carnivores’ access to carcasses. Fisheries studies forecast that higher peak-summer water temperatures will make some low-elevation streams less habitable to Yellowstone cutthroat trout. The list of impacts in this ecosystem goes on: reductions in whitebark pine, already reduced by 90% in some areas, will negatively affect grizzly bears that depend on whitebark cones as an important food source. Changes in water temperature are likely to impact invertebrates. Changes in runoff may influence the character of the physical landscape.

These findings — notice the qualified wording: “may,” “likely,” etc. — highlight the complexity of global and local ecosystem dynamics. We have limited ability to know the future with precision. While there is certainty in the general direction of climate warming and many of its impacts, more research is needed. For example, annual snowpack and snowmelt fluctuations can complicate monitoring long-term changes to Teton glaciers. On-the-ground analyses are needed to complement studies using remote, aerial imagery. Adding to the complexity are multiple interacting forces of change such as the combined effects of climate with changes in economic conditions, population levels, land-use and culture that interact and result in cumulative effects. For example, would a climate-driven loss of snow in Colorado and New Mexico push more skiers to the Tetons and add land-use pressures? Will Bozeman, Montana’s population boom affect visitation to national parks and further stress wildlife?

How then should we respond to climate change in the Greater Yellowstone? My work on the IPCC assessment points to four big-picture strategies worth pursuing: thinking about ecological systems holistically, reframing conservation, meaningfully engaging the public and transforming our institutions and culture. Let me elaborate.

Think systems: Ecosystems and social systems are coupled. Targeted research is important, but we also need to transcend conventional silos of science and analyze change holistically with interdisciplinary approaches in a way that informs decision-makers. Ecological changes are common, but often hard to predict. A frontier of science worthy of our investment is to understand and identify critical tipping points and thresholds of change that trigger social-ecological regime shifts.

Reframe the practice of conservation: Social-ecological systems are in a state of rapid change, demanding a paradigm shift in how we think about concepts like land protection. National parks and conservation areas must now be managed as interconnected networks of protected areas, prioritizing species migration, genetic diversity, and ecosystem health and resilience. Being responsive to new conditions and learning from experiences in ecosystem management are now even more critical. This translates to managing actions as if they are experiments, revisiting our underlying assumptions and adjusting policies to reflect new discoveries.

Engage the public: To learn what’s changing and effectively plan a response, we must converse as a community about options for action and their implications. Decision-makers, agency personnel and the public should convene collectively to explore plausible, likely and desirable futures. These exercises, “participatory scenario analyses,” should draw on the best-available science and heed the expertise of land users like ranchers, recreationists and Indigenous peoples. This process, now used in several regions, has helped to clarify how decisions made in the near future will broaden our choices for action later, building our climate resilience. How might we do it locally? The Charture Institute’s “22 in 21” gatherings are one possible venue for debuting these conversations.

Transform institutions and culture: It’s clear our existing institutions and values are poorly suited for responding to climate change. The United States withdrew from the Paris Climate Accord. Previously established government incentives promoting low-carbon energy sources and efficient transportation are being dismantled. Humans tend to be shortsighted, and in the Greater Yellowstone economic development regularly takes priority over resource conservation and ecological health. Local-level baby steps like prohibiting plastic shopping bags are laudable, but those efforts are washed amid the broad scope of the task at hand: preparing for an uncertain future of rapid change. Transformation means fundamental change in how we govern, how we make decisions, how we behave.

There is little doubt that the Greater Yellowstone Ecosystem will experience ecological shifts and a vastly different future. But there are reasons for hope. While many of the likely scenarios are frightening, the door is not shut to build resilience, work to shape the future and retain the region’s most valuable assets. It’s a tall, but noble challenge that will require transformative change in ourselves, our belief systems, our views on economic growth and development, and the institutions that govern our world. Don’t be a bystander. The time to act is now.

Good point Ken. Why can't the rest of America sue California state for their incompetence and irresponsibility ? I personally really did not enjoy their smoke this late summer. Also note the in the picture of Mr. Kofinas. every single piece of clothing, boots , sunglasses and even his dog's collar was made from petro chemicals.....oil......

How much impact do the fires in California, caused by decades of liberal mis-management, added to the global warming equation? All that smoke that has descended upon the western United States cannot be good. Shouldn't they be liable for that? isn't there an avenue we can turn to,to maybe sue the state of California for our bad air? California and Colorado both try to sue generating stations that burn coal. Why shouldn't we be able to sue them over our bad air quality caused from their bad decisions? Any good lawyers out there want your first, big, high profile case?