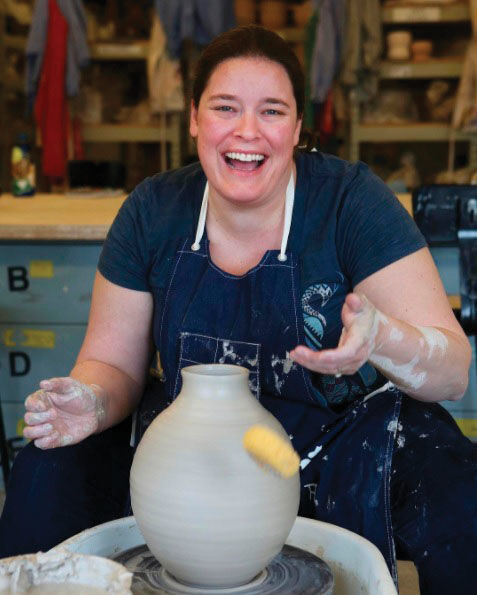 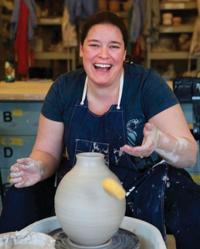 Tenley Thompson, a potter, said the Fall Arts Festival could have a component that elevates artists living and working in Jackson. “I love Fall Arts, but it has nothing to do with me,” she said. 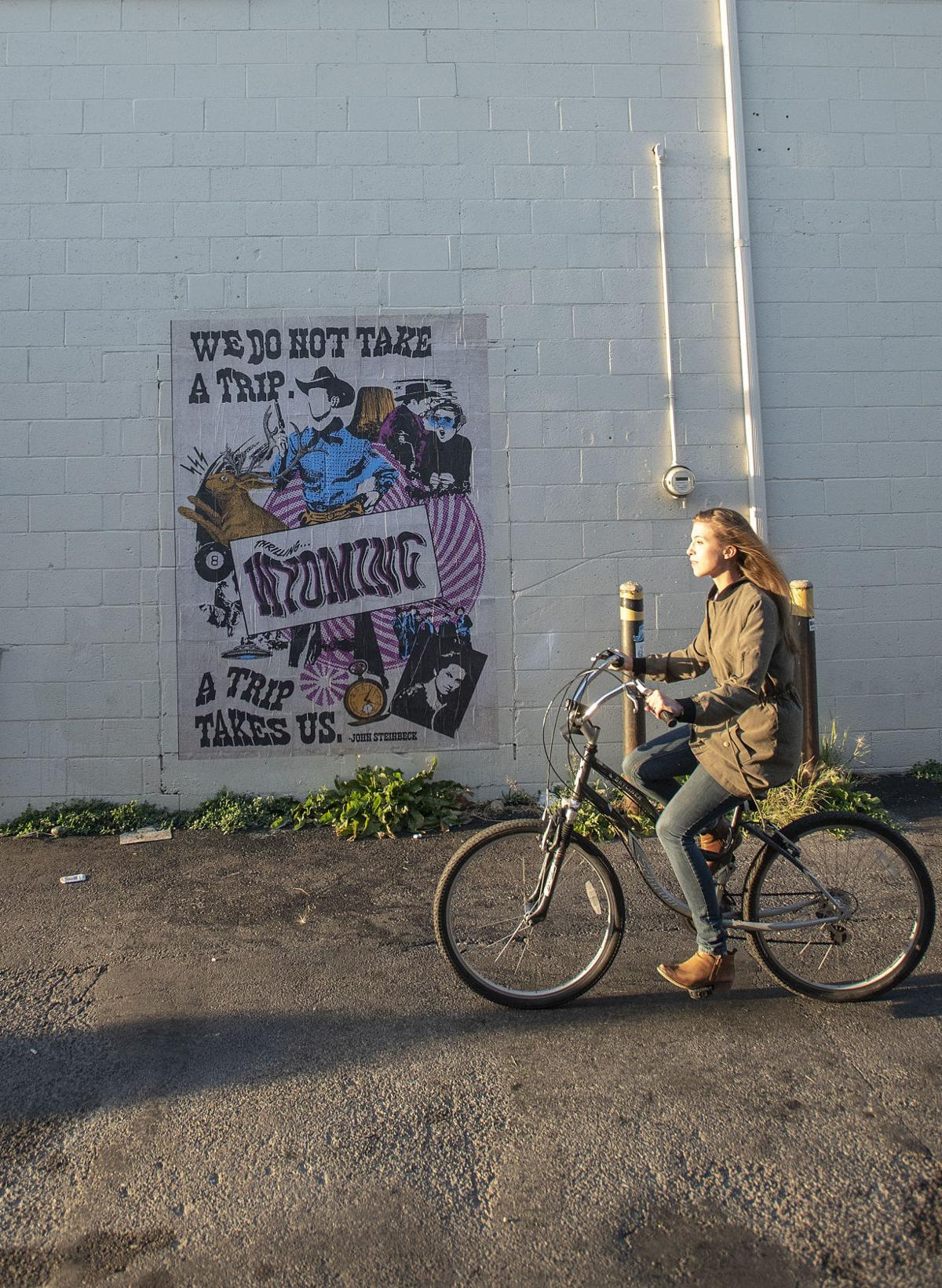 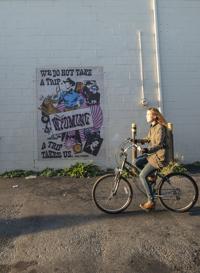 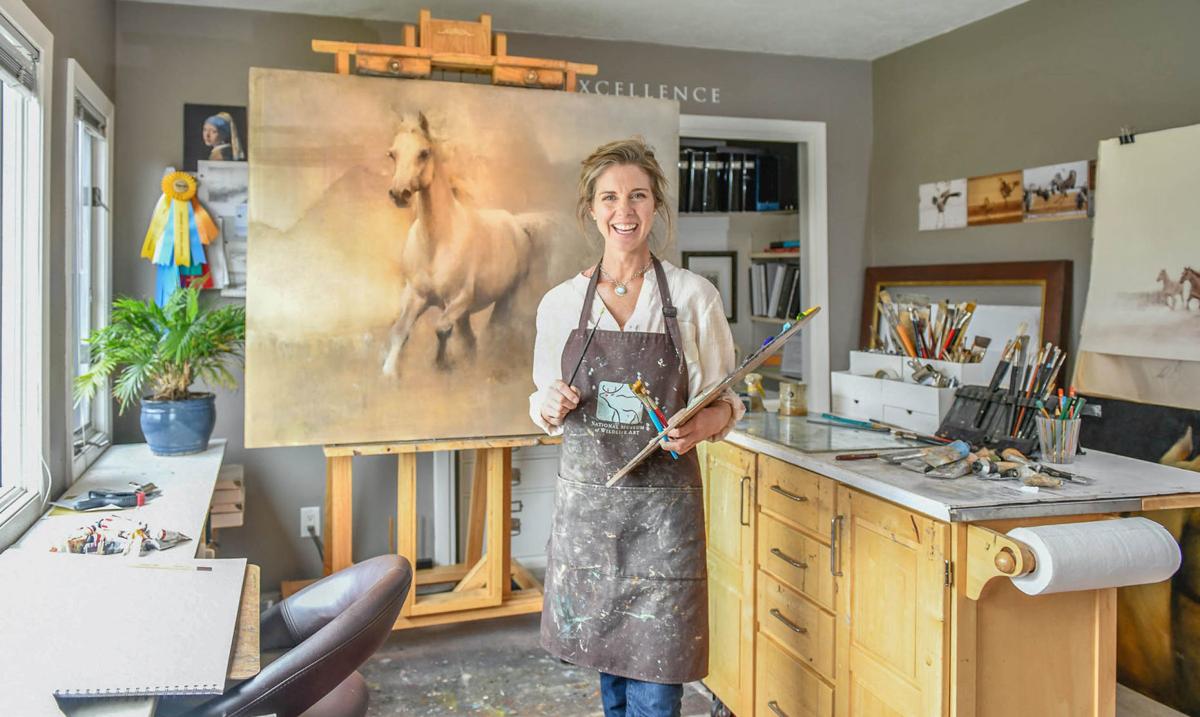 Kathryn Turner grew up in Jackson attending the Fall Arts Festival each year. Her early exposure to the art world likely played a role in her career as a successful artist, she said.

Andy Taylor paints outside his booth during the 2019 Fall Art Festival’s Takin’ It to the Streets art fair on Town Square. The event gives artists a chance to show how they create their works, and they can meet collectors. It’s particularly good exposure for up-and-coming artists whose work isn’t carried by Jackson galleries.

Tenley Thompson, a potter, said the Fall Arts Festival could have a component that elevates artists living and working in Jackson. “I love Fall Arts, but it has nothing to do with me,” she said.

Kathryn Turner grew up in Jackson attending the Fall Arts Festival each year. Her early exposure to the art world likely played a role in her career as a successful artist, she said.

When Kathryn Turner was a kid, she had the Fall Arts Festival posters on her walls.

Each year, the featured artist’s work is blown up and plastered all over town, and festivalgoers like Turner can buy a copy of the poster to take home. Even after the festival was over, Turner would look at those posters during the long Wyoming winters of her childhood, gaining inspiration from the world-class artists who show their work in Jackson.

“I was born and raised here,” she said, “and for as long as I can remember I’ve looked forward to the Fall Arts Festival every year.”

Something about those posters had an impact, since Turner is now a well-regarded, successful artist in her own right, with works in the National Museum of Wildlife Art and her own gallery. As a capstone on the summer art season, she said, the festival provided a spark for her interest in painting.

The festival’s impact on Jackson’s art scene could be hard to overstate. Events like the Western Visions sale at the museum and the Jackson Hole Art Auction define the local art market for an international audience of collectors and art enthusiasts by highlighting the wildlife and Western genres.

Though those types of art dominate the gallery scene in Jackson and, therefore, where much of the money is made, changes are afoot that boost a younger set of artists who don’t fit as neatly into those categories.

“Western Visions was the sort of cornerstone of Fall Arts, and then a whole bunch of other stuff got built up around it,” said Bronwyn Minton, executive director of the Art Association of Jackson Hole.

Minton worked at the museum before taking her post at the Art Association, so she has worked on both sides of the art world. An artist herself, she has seen the success the museum and galleries have showing classic works by renowned names.

On the other hand, in her role at the Art Association she has worked with the up-and-coming artists who aren’t always represented during the festival. Though the association puts on events like Takin’ it to the Streets, which features local artists and makers, the exposure and profit margins don’t compare to the works sold in high-profile galleries.

That’s not lost on Tenley Thompson, a local potter and artist who has found success in her work outside the festival, but not so much during it: “I love Fall Arts, but it has nothing to do with me. And it’s not about me, and there’s no space for me or interest in me as a successful local artist.”

Thompson, like Minton and Turner, has seen her share of Fall Arts Festivals. She understands its importance for both the art scene and the success of the plethora of galleries that dot downtown. If a disconnect exists between the festival and the art scene, it’s that lack of representation for up-and-coming artists and a place for collectors to buy their work.

Part of that may be purely financial. Galleries make most of their money selling high-dollar works, and the festival increases the concentration of well-heeled collectors ready to spend on new pieces.

They have to consider their own costs when deciding which pieces to sell. Renting a space on Town Square is expensive, and even the most well-regarded galleries sometimes end up throwing in the towel, like Legacy Gallery did in 2019, ending a 28-year tenure.

Those considerations can leave local artists, even the most successful ones, a bit in the lurch, but in recent years Jackson’s artists have been more visible during the festival.

During the 2016 festival, Jackson Hole Public Art started a temporary exhibition called Stickum Up, which has morphed into Wild Walls. Local artists affix murals to walls in alleys around town using wheat paste, then the works are cleaned up afterward.

“That was motivated in part to give local artists additional exposure during the Fall Arts Festival,” Public Art Executive Director Carrie Geraci said. “I think, you know, with the cost of real estate being very high in Jackson, there aren’t a lot of places to for artists to showcase their work.”

Wild Walls brings some of urban art’s spontaneity to Fall Arts and can lend name recognition and a commission, but making a living in Jackson as an artist does require selling pieces. Takin’ It to the Streets and the Art Association’s Art Fairs give artists those options, though the Art Fair has been canceled this year because of the coronavirus.

Takin’ It to the Streets is a great place for younger artists to find new buyers or collectors. Being right on Town Square, it beckons to pedestrians on their first trip to the festival and devoted enthusiasts who come every year.

“There’s ways for everybody here to have their own unique voice and contribution,” Turner said. “I’m a great example of that. I started out with Takin’ It to the Streets.”

Turner’s experience can be seen as the natural output of a festival with a focus on wildlife or Western art. She has created success for herself outside the festival’s confines, but her work fits the aesthetic many Fall Arts attendees might be looking for.

Artists who might be classified as modern or contemporary sometimes don’t always fit the same criteria, so they have a harder time finding room for themselves. Thompson said she’d like to see something like the Salt Lake City Urban Arts Festival happen in conjunction with Fall Arts.

That annual event gives both established and new artists of all mediums an opportunity to sell their works. Adding something like that to Falls Arts could drastically expand the number of creatives whose work gets play during the festival, but the cost of real estate in Jackson again poses a challenge.

“I would like to see that here,” Thompson said, “and I just think it’s a space issue.”

As part of Wildly Creative Jackson Hole, a campaign to provide help to a range of artists in Jackson, Thompson has lots of ideas for increasing the exposure of up-and-coming artists. She’s not the only one with ideas for diversifying the types of art highlighted at the festival.

“My idea has always been to make the square just for pedestrians,” Turner said. “The reason for that is then you can even you have more of an opportunity for musicians and performance artists.”

Increasing the exposure for young artists during Fall Arts might not just help them. If visitors and residents want to build their art collections, discovering new artists when their works are still priced lower is a great way to do so.

“I’ve been, you know, slowly building my art collection personally by commissioning folks that I just think are really going to go places,” Thompson said. “I’ve got these pieces now that are far more valuable.”

Though Fall Arts will always be a defining part of the Jackson art scene, artists across the board see more room for improvement. Thompson, in particular, wants the symbiosis that already exists been the festival and the galleries to be extended to artists. As she said, it would be good for collectors, too.

Elevating artists who choose to live and work in Jackson would also pay dividends outside the festival.

“Artists are vitally important to our quality of life here,” Geraci said, “and we can always do more for them.”