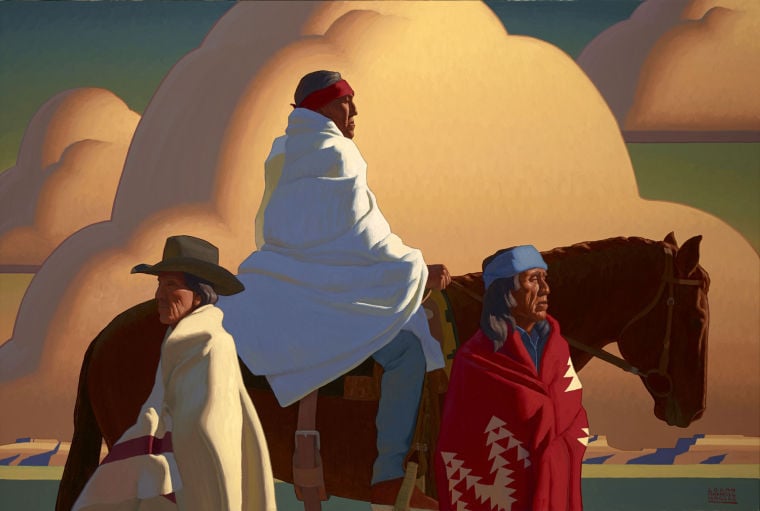 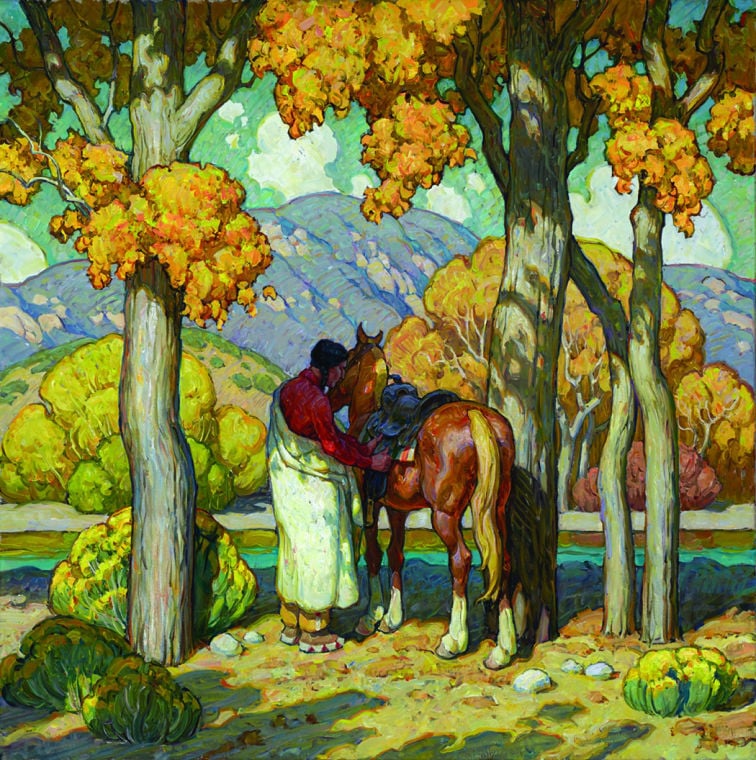 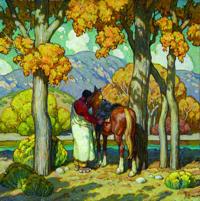 Tim Solliday will enjoy a Fall Arts Festival showcase at Trailside, too. Above is “Adjusting his Saddle.”

Tim Solliday will enjoy a Fall Arts Festival showcase at Trailside, too. Above is “Adjusting his Saddle.”

“You’re guaranteed a large audience that has many highly experienced collectors in it,” she said.

While Trailside still has its stable of well-known Western artists, this year Leshe is excited to introduce collectors to Logan Maxwell Hagege with a one-man show called “Changing Light.”

“This is probably the first time in several years that we’re featuring an artist who isn’t a wildlife painter during the Fall Arts Festival,” Leshe said. “Logan’s work has a real contemporary feel to it.”

Hagege paints contemporary landscapes and Native Americans of the Southwest.

“I’ve been seeing his work the last several years and thought it was time to introduce him to more Jackson collectors,” Leshe said.

Hagege joined the gallery late last year. Because of his success at venues such as the Autry Museum’s Masters of the American West, he already has a sizeable following.

“A number of collectors who fell in love with his work at that show live in Jackson,” Leshe said.

Based in Los Angeles where he grew up, Hagege’s training followed the French atelier model, with days often involving six hours of drawing and painting from live models.

Long out of school, Hagege still believes that evolution in art is never-ending. He constantly challenges himself with new ideas and new ways of looking at the same subject.

“I feel very strongly about Logan’s work,” Leshe said. Anticipating that collectors will agree, each of the 20 paintings in “Changing Light” —“He’s been saving paintings for us for some time,” Leshe said — will be sold on a draw basis.

Concurrently with Hagege’s work, the gallery will be featuring new paintings by Tim Solliday, Lindsay Scott and husband-and-wife artists John and Suzie Seerey-Lester.

Other artists will have one or two new paintings in the annual gallerywide Fall Gold exhibition.

“Tim’s work, too, has a modern feel to it,” Leshe said. “The palette is different and there is a very strong sense of design.”

Solliday has been with Trailside for over six years, but it was the gallery’s Scottsdale, Arizona, location that displayed the larger body of his work.

“We felt it was time to bring more of it up here,” Leshe said.

While Solliday’s paintings might have a modern feel, traditional Western and wildlife art institutions showcase them. Solliday has participated in the Prix de West in Oklahoma City and the Autry Museum’s Masters of the American West show. He has been featured in magazines from Southwest Art to Western Art Collector.

The Seerey-Lesters both paint landscapes and wildlife, most often large mammals, birds of prey and underwater creatures. The two are almost as recognized for their conservation efforts as for their art. Recently they received the Conservation Artist Award from the group Artists for Conservation.

In addition to showing new paintings, John Seerey-Lester will be signing copies of his newest book, “Legends of the Hunt — Camp Fire Tales.”

All of the individual exhibitions and showcases as well as Fall Gold will hang through Sept. 14. A reception for all of the artists is set for 4-7 p.m. Sept. 13.