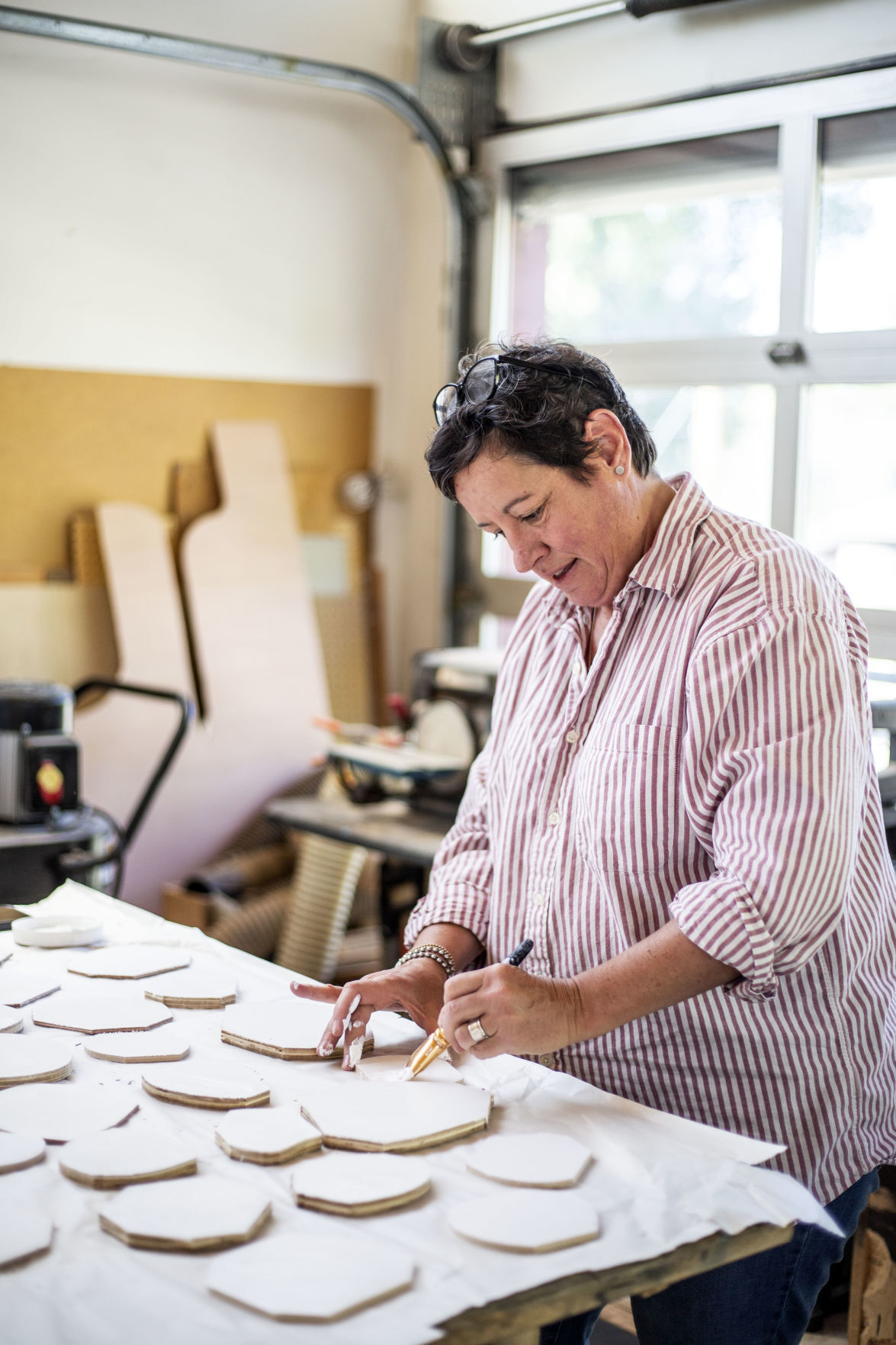 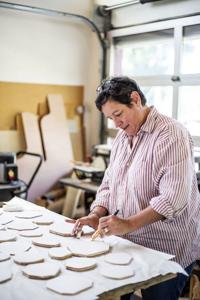 Art Association Executive Director Bronwyn Minton works in the nonprofit’s new woodworking space in June. She sees the Fall Arts Festival as a way to boost the profile of local talent. 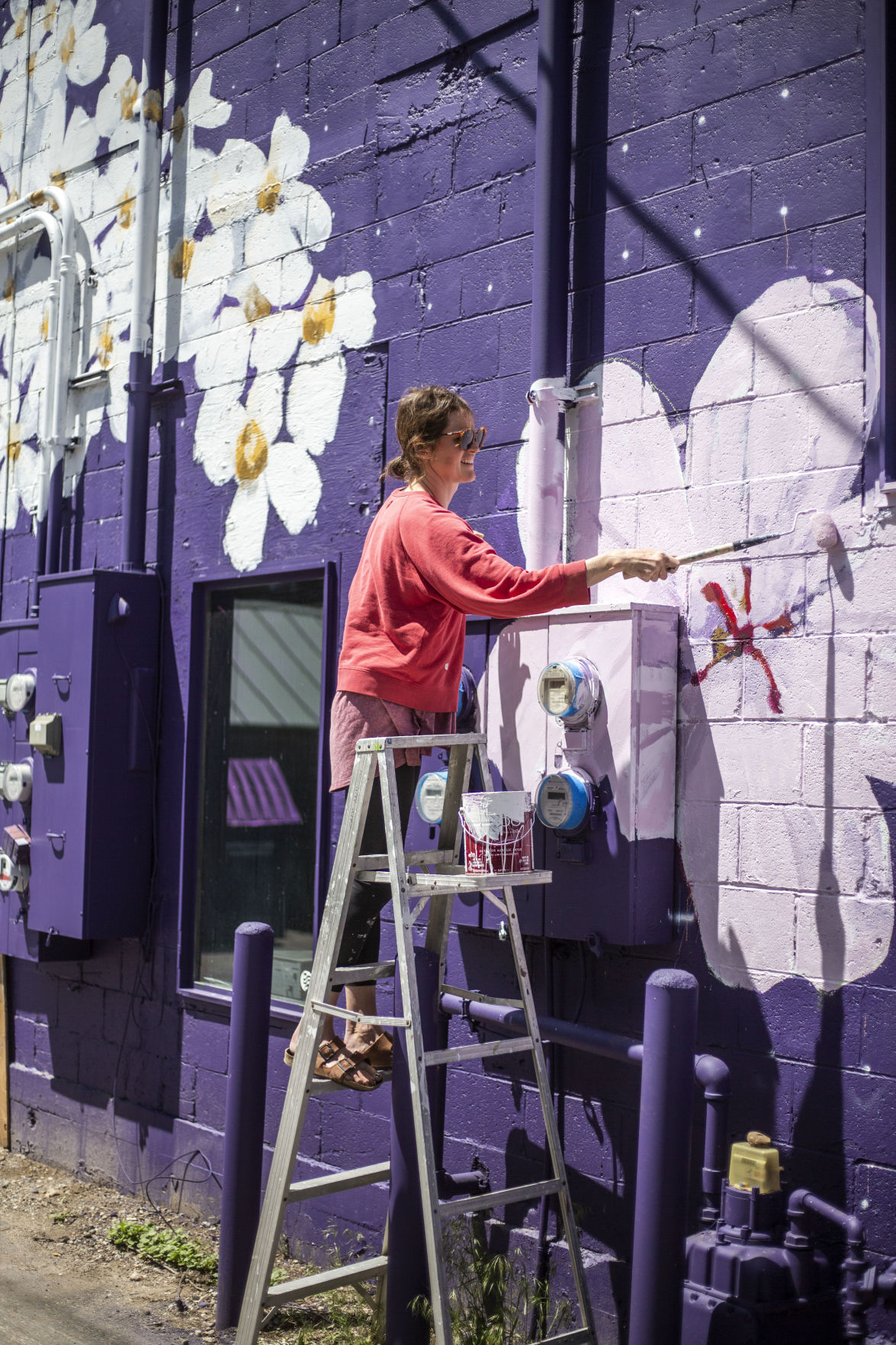 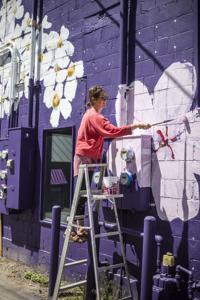 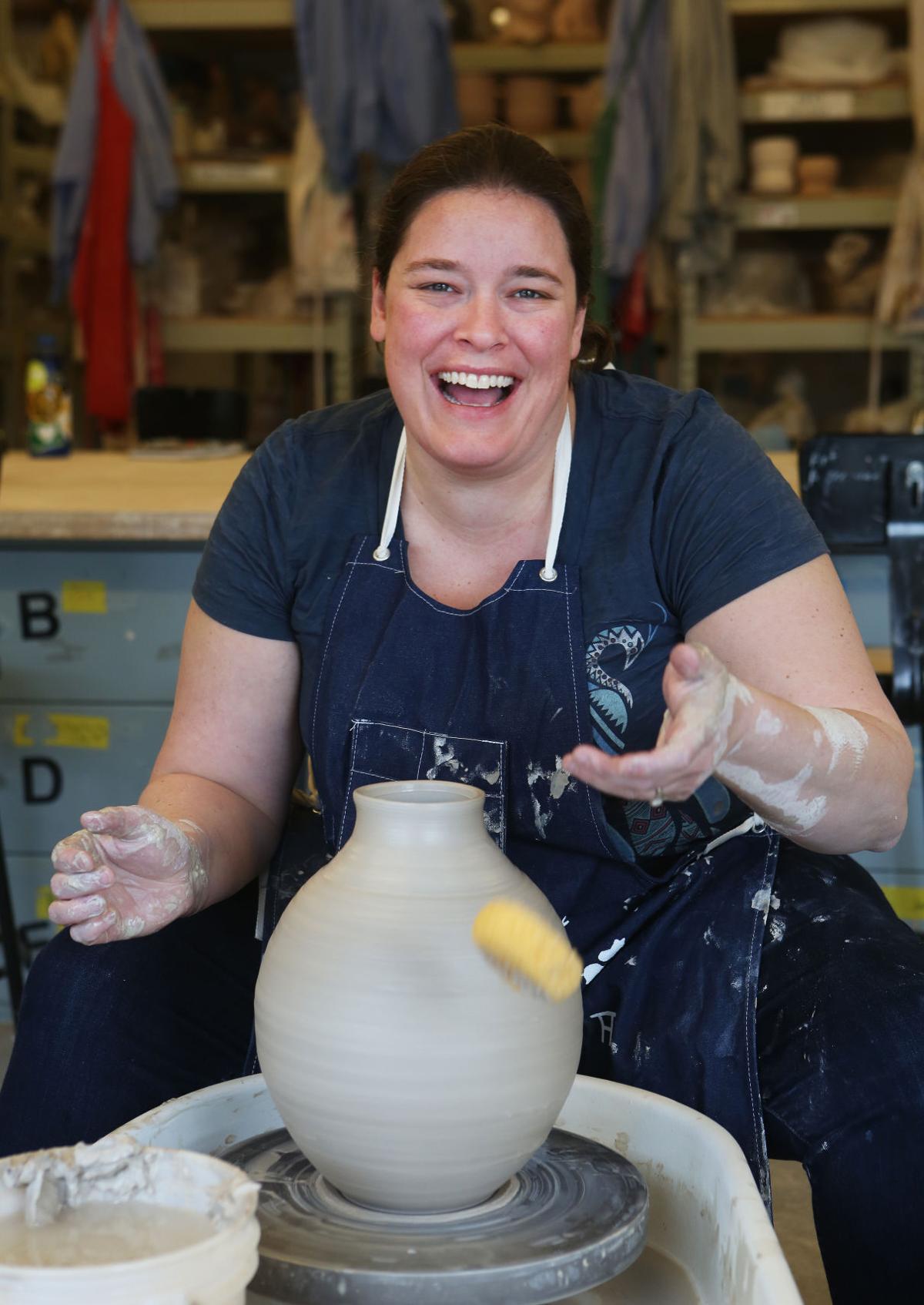 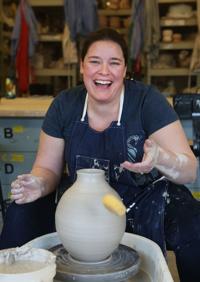 Tenley Thompson grew up being inspired by the Fall Arts Festival.

Art Association Executive Director Bronwyn Minton works in the nonprofit’s new woodworking space in June. She sees the Fall Arts Festival as a way to boost the profile of local talent.

Tenley Thompson grew up being inspired by the Fall Arts Festival.

In August Jacksonites had the opportunity to walk through Sage Living and admire the suspended feathers and neighborhood portraits that transform the new senior living center into a carefully created home.

The chosen artwork adorning the walls and communal spaces was intentional. The St. John’s Health Foundation devoted almost its entire art budget to local makers like Kathryn Mapes Turner and Katy Ann Fox, who were thrilled to take on the opportunity.

“It catapulted me out of my solitary experience during the pandemic,” Fox said. “It’s so cool.”

Like many local artists, Fox credits the Fall Arts Festival as a source of inspiration and a springboard for success. But she also thinks more could be done to celebrate local talent, not just nationally renowned artists in private galleries.

“You have access to your audience here,” she said. “And the opportunity to make a personal connection.”

Sage Living is just one example of what that could look like.

Tenley Thompson, a potter who recently sold her wares at the July Art Fair, grew up inspired by the Fall Arts Festival back when artists like Turner were still featured.

“The reason I’m an artist today is in part because of the experiences I had as a kid, watching people at the QuickDraw,” she said.

The QuickDraw invites both visiting and local artists to paint or sculpt live, in front of a crowd, which then bids to buy the work. Every year the event attracts a national audience, and it’s typically quite fun. Fox said she loves cracking jokes and getting out of her own head while painting there.

When the Jackson Hole Art Association offered Thompson a spot in last year’s QuickDraw, she jumped at the chance. Ultimately she wants to see her own work in Jackson galleries, but that’s a daunting proposition in the current market.

One attempt to bridge the gap is Takin’ It to the Streets, a Town Square celebration of local talent put on by the Art Association.

Screenprinter and local maker Lisa Walker got her start at the event and said it gave her the confidence she needed to nurture her brand. She recommends new artists share a booth to alleviate some of the pressure.

Bronwyn Minton, executive director of the Art Association and one of the artists with work in Sage Living, said Takin’ It to the Streets gets artists’ work out of their studios and into the community. She pointed to the partnership with Taste of the Tetons as the kind of block party collaboration that makes the event special.

But she also recognizes it’s difficult for artists to transform a once-a-year event into long-term financial success.

The founder of the Art Association, Gloria “Georgie” Morgan, wrote that the nonprofit was created “during a time of low/no employment in Jackson and started out to help develop craft and art skills which might supplement the summer’s wages and introduce art as an essential part of our lives.”

Originally that revenue was partially provided by local galleries, but as rents on the Town Square have skyrocketed those galleries have been forced to select and show art based on price per square inch of wall space. Even high-caliber local artists often don’t make the cut.

“Galleries are businesses, and they are trying to make their living,” Minton said, adding that they can still serve as inspiration even if most local artists will never have their work shown there.

The Art Association has had several gallerists on its board of directors over the years. Some, Bronwyn said, are “thoughtful about our community.”

But once non-Jacksonites buy the galleries, artists like Thompson fear they will lose all connection to the valley.

“Those folks certainly aren’t going to have a focus on Jackson Hole artists, they’re going to focus on what sells well in Scottsdale and here and LA and New York. It’s not about Jackson Hole at all at that point,” she said. “At the end of the day, we’re going to lose something very important about who we are.”

During the pandemic some Jackson artists moved to digital marketing as a tool for exposure. Through social media they connected with buyers across the country who were interested in Jackson Hole art. Others collaborated with local brands like Avalon7 to get custom-designed gaiters and gear to adventure enthusiasts in several states.

Pursuit of those alternate avenues in part reflect a feeling that the festival has its soul and become a rich collectors’ playground.

“Art means more than selling a painting in a gallery,” Thompson said. “And we should be celebrating all of the things that make our community so special.”

In part that’s because board members and donors often dictate content, Walker said.

“Nobody is bringing in controversial work,” she added. “And Jackson is probably not the place to do that. You would have to have someone who’s really ballsy and can afford to rent the space.”

The artists did point to efforts by nonprofits like the Art Association as an avenue for hope.

In addition to Takin’ It to the Streets and the QuickDraw, the Art Association will feature “Women in Wyoming,” a photography exhibit by Lindsay Linton Buk, during this year’s festival in the Center for the Arts gallery.

The association is also creating an online database of local artists that Minton hopes will “contribute to their visibility.”

JH Public Art also offers opportunities for local artists through events like Wildwalls, though those paintings are temporary and tucked away in Jackson alleys.

Thompson felt the love from her community at July’s art fair, and said the strength of local bonds buoys her hope. But as the cost of living and housing in Jackson spirals out of control, artists need more than good vibes to remain in the valley.

“You’re not going to have a vibrant arts scene and a vibrant arts culture in your community if you aren’t able to support the grassroots artists on the ground,” Thompson said.  

“You’re not going to have a vibrant arts scene and a vibrant arts culture ... if you aren’t able to support the grassroots artists.” — Tenley Thompson jackson potter