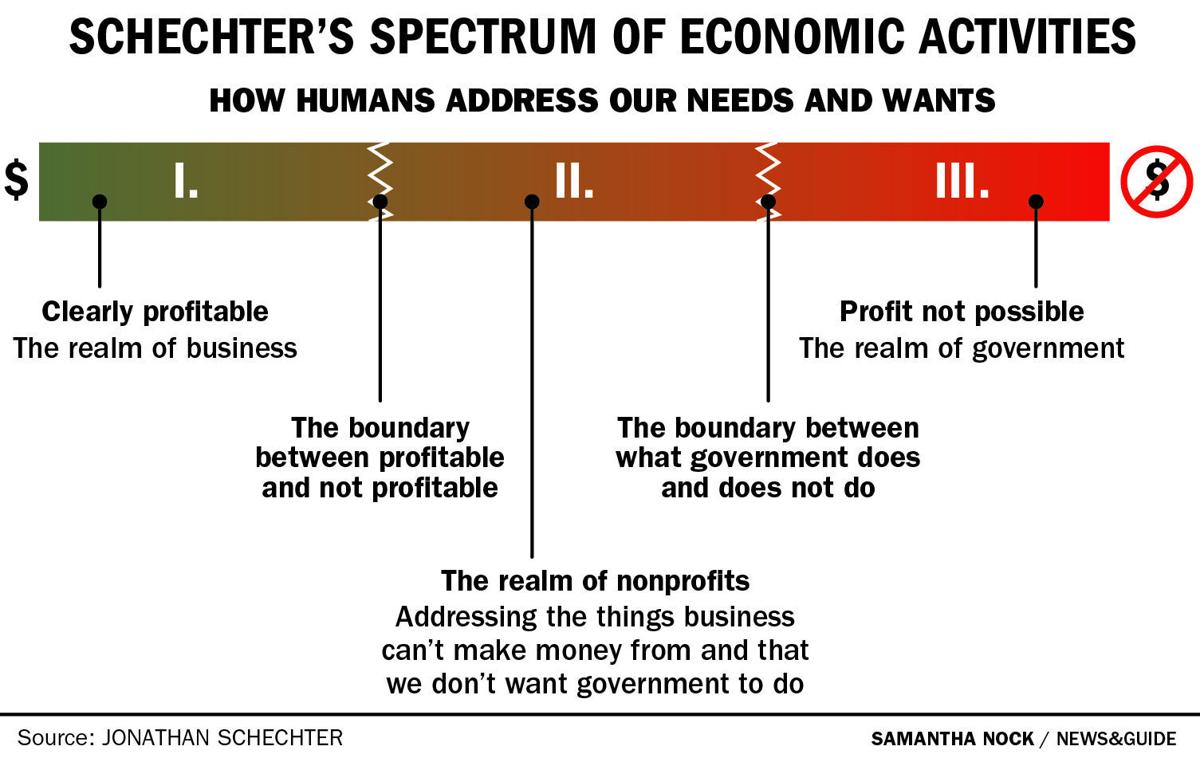 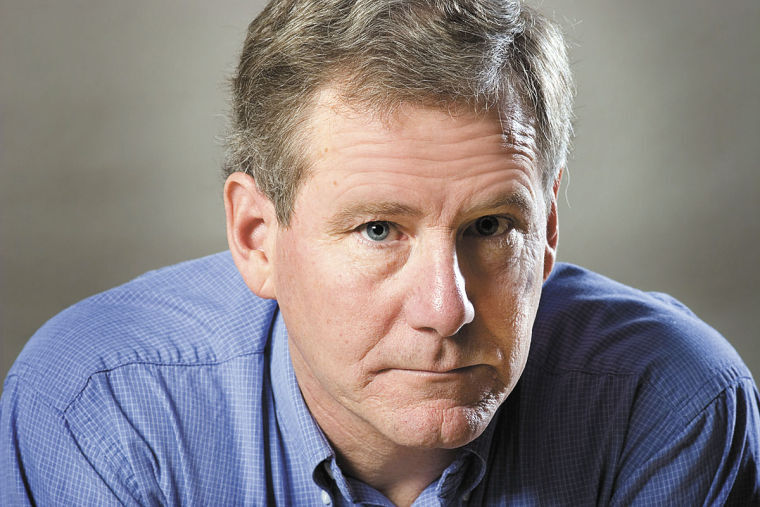 The Community Foundation’s Nonprofit Directory lists 208 nonprofits based in Teton County. Which raises the question: Why? As in: “Why do nonprofits exist at all?” The immodestly named Schechter’s Spectrum of Economic Activities suggests an answer.

Why do nonprofits exist?

Not everything humans need and want can be made profitably, though. To produce non-profitable goods and services, we first look to government, which builds infrastructure, runs the military and police, fights fires, operates schools and the like.

After government has done its work, though, there are still goods and services that businesses can’t profitably make and governments don’t choose to provide. These are either provided by the nonprofit sector or not provided at all.

Hence Jackson Hole’s large number of nonprofits. As America’s most libertarian state, Wyoming places significant legal and financial constraints on what government can do. Yet for reasons ranging from our extreme wealth and income inequality to our extraordinary ecological health, Jackson Hole has a large number of needs and wants the private sector won’t address and the public sector doesn’t have the money to address. (See “Schechter’s Spectrum of Economic Activities.”)

Underlying Schechter’s Spectrum is the concept of financial profit.

What about products that lose money? From a business perspective — i.e., from a financial profit perspective – we know they’re losers. That’s why we ask the public or nonprofit sectors to provide them. But how, then, do we judge the products we know will lose money? More importantly, how do we judge the organizations that produce them? If financial profit isn’t a good or fair tool, what is?

Whether private, public or nonprofit, every organization must be run efficiently. Hence the value of financial metrics.

For businesses, though, financial metrics are an end in themselves. Why? Because we don’t ask businesses to do anything but make money.

Not so governments and nonprofits. Consider, for example, two randomly selected entries from the Community Foundation’s Nonprofit Directory.

Axis Booster Club’s mission is “To support and promote competitive gymnastics and related aerial sports, fostering personal growth, fitness and achievement for youth in Jackson Hole.” At the other end of the alphabet, “Wyoming Untrapped is dedicated to creating a safe and humane environment for people, pets and wildlife through education, trapping regulation reform and compassionate coexistence.”

Financial metrics can’t determine whether either organization is achieving its mission. Ditto the community’s 206 other nonprofits. So what do we do?

The best answer is: “Don’t use financial metrics, but instead develop metrics that speak directly to the organization’s mission.” But that is really hard to do, especially given that Jackson Hole’s nonprofits are hallmarked by overworked, underpaid staffs and part-time, volunteer boards.

This, in turn, shines a light on two fundamental realities defining nonprofits and governments.

One is that as difficult as it is to run a successful business, at least the private sector has a clear standard for judging its success: financial profit.

In comparison the work done by government and nonprofits is not only unprofitable, it’s often far more challenging, complicated, messier, less prone to tidy solutions, and less amenable to clear metrics of success.

The second fundamental reality is that, in such a messy environment, it’s really hard for boards, staff, donors and patrons to accurately judge an organization’s success. We know profit is a bad metric, but what’s a good one?

It’s not clear. What is clear, though, is this: Because nature abhors a vacuum, evaluations will be made. And when no other evaluation tool suggests itself, boards tend to fall back on “Old Reliable” — the easy to understand, easy to use, and ubiquitously used tool of financial profit. Which, of course, clearly shows that everything a nonprofit does is a failure.

All of this leads into a study I recently completed. Entitled “Governance 2001-2021: The Changing Nature of Jackson Hole’s Nonprofit Boards,” the study examines how the makeup of local nonprofit boards has changed over the last 20 years.

To conduct “Governance 2001-2021,” I first obtained the board rosters for 22 local nonprofits which were operating in both 2001 and 2021. I then gathered a bit of personal information about each board member: profession, gender and whether their income was earned locally or non-locally. Finally, I collected some basic financial data about each organization: revenue, expenses and net assets.

The entire study can be found at my website (cothrive.earth), and contains far more information than can be covered in this essay. Some of the key findings, though, relate directly to the ideas laid out above.

Place where members earned their living:

These findings are significant in two ways.

First, they reflect the changing nature of Jackson Hole.

Anyone who has lived in the Teton region for a long time knows the area has changed. How to capture that change in data, though? Perhaps the most telling statistics relate to the growth of Teton County, Wyoming’s finance industry:

Combine these with other, similar data, and a strong argument can be made that, among all of America’s counties, Teton County trails only New York City and perhaps a couple of other of places in the importance of finance to our economy. Critically, though, we’re the only finance-oriented locale in America with two national parks and three national forests.

For example, between 2001 and 2019 the combined net assets of the 22 nonprofits studied in “Governance 2001-2021” grew from $105 million to $326 million. As that happened it became increasingly important to these organizations to have board members comfortable with their increasing size and sophistication.

Combine these with the study’s other findings, and three reasons seem to explain the sharp increase of local nonprofit board members with a background in finance and, more broadly, business:

• The change reflects the growing size and sophistication of the community’s nonprofits; and

• So much wealth has flowed to the finance sector that organizations have recruited finance-based board members because, to quote Willie Sutton, that’s where the money is.

Also reflecting changes in our community is the huge uptick in women serving on boards, as well as the decrease in the number of board members earning their livings locally. The former reflects our progress — however imperfect — toward becoming a more equitable community; the latter suggests the increasingly cosmopolitan backgrounds of those moving to the Tetons region.

For this essay I broke the nonprofits into three categories, grouped by 2019 net assets (Table 1).

Figure 1 breaks down the nonprofits by net asset category and board members’ basic professions. The big takeaways?

One is obvious: the Big 8 have much bigger boards.

The other is similarly clear: In the past 20 years the biggest growth in members working in finance in particular, and business in general, has been among the Big 8 boards. Which makes sense, because these organizations hold around 90% of the group’s collective assets (in 2019 they held $290 million out of the organizations’ combined $326 million in net assets).

Figure 2 categorizes members by their organization’s net assets, their gender, and whether they earned their incomes locally or outside the area.

Here, too, two points jump out.

First, nearly two-thirds of those serving on the Human Services 7 boards are female, up sharply from 2001.

Second, in keeping with the nature of their clienteles, currently 66% of the members of the Smaller 14 boards earn their livelihoods locally, versus just 30% for the Big 8 (as a rule of thumb, the Smaller 14 organizations focus on local clients/patrons, while the Big 8 focus on a mix of local and non-local).

Why does any of this matter? For two reasons.

First, nonprofits play an extraordinarily important role in Jackson Hole. Arguably, no other place on Earth enjoys our community’s combination of environmental, social and economic capital. Yet every facet of the community is being challenged by our rapid growth and change. Given this, and given that Wyoming’s state and local governments have relatively few resources to address these challenges, Jackson Hole looks to nonprofits to help tackle issues as varied as stewarding the region’s ecological health and mitigating our nation-leading income inequality.

If such a gap does occur, how will it be filled? In the worst-case but most likely scenario, the gap will be filled with tools which, while they may be inappropriate, will at least be ones with which the board is familiar. And when that happens, if one of every four local nonprofit board members has a finance background, and six of every seven has a business background, there will be strong tendency to fill that evaluation void with financial metrics. Which, of course, are utterly inappropriate for assessing a nonprofit’s mission-driven work.

Because of Jackson Hole’s exceptional bounty, there is arguably no place on Earth with a greater gap between our potential and the level at which we operate. Our local nonprofits struggle mightily to help fill that gap, for which they deserve our gratitude and support. They also deserve being judged in ways appropriate to the work they do.

Jonathan was a longtime economics columnist for the Jackson Hole News&Guide and runs The Charture Institute, a Wyoming-based think tank focused on growth, change and sustainability. Reach him at kjschechter@gmail.com.