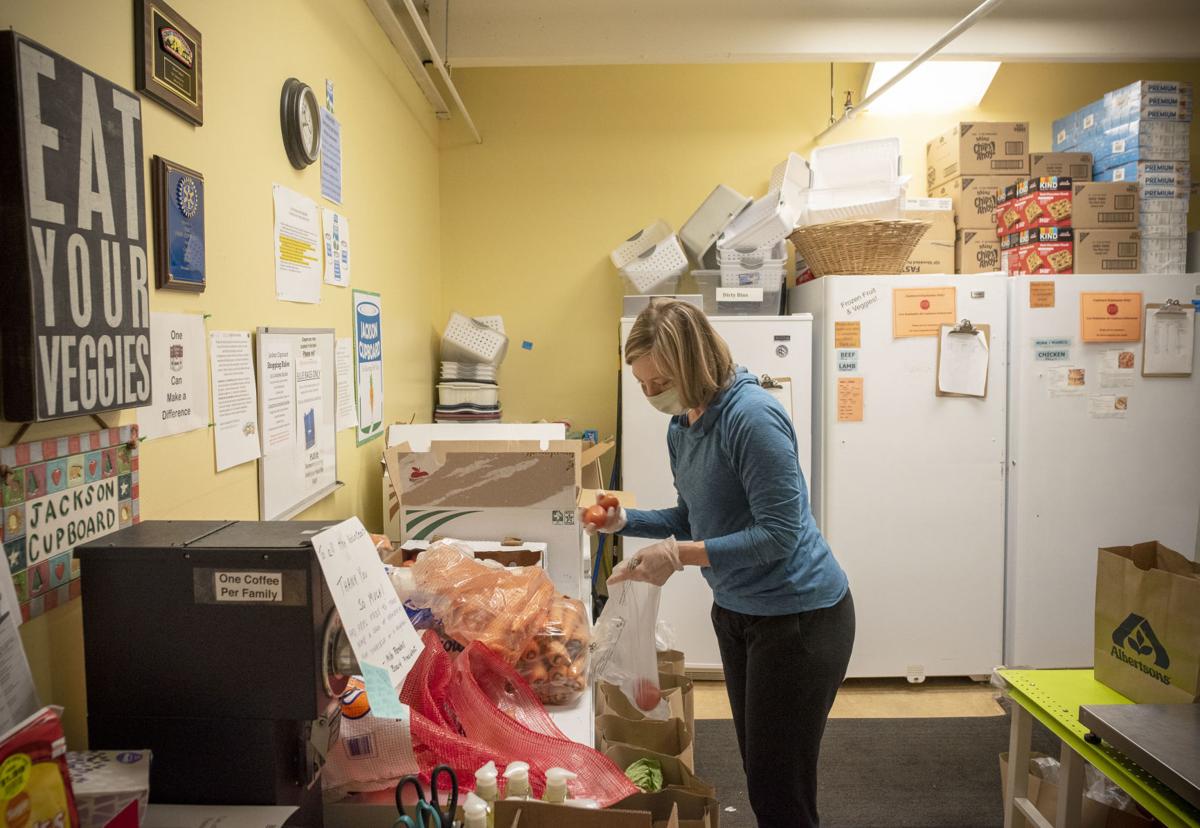 Sharel Lund, executive director of One22, packs up grocery bags for families in need during a food giveaway. She said there have been some “major gifts” of five figures that upped the average donation to the organization this year. 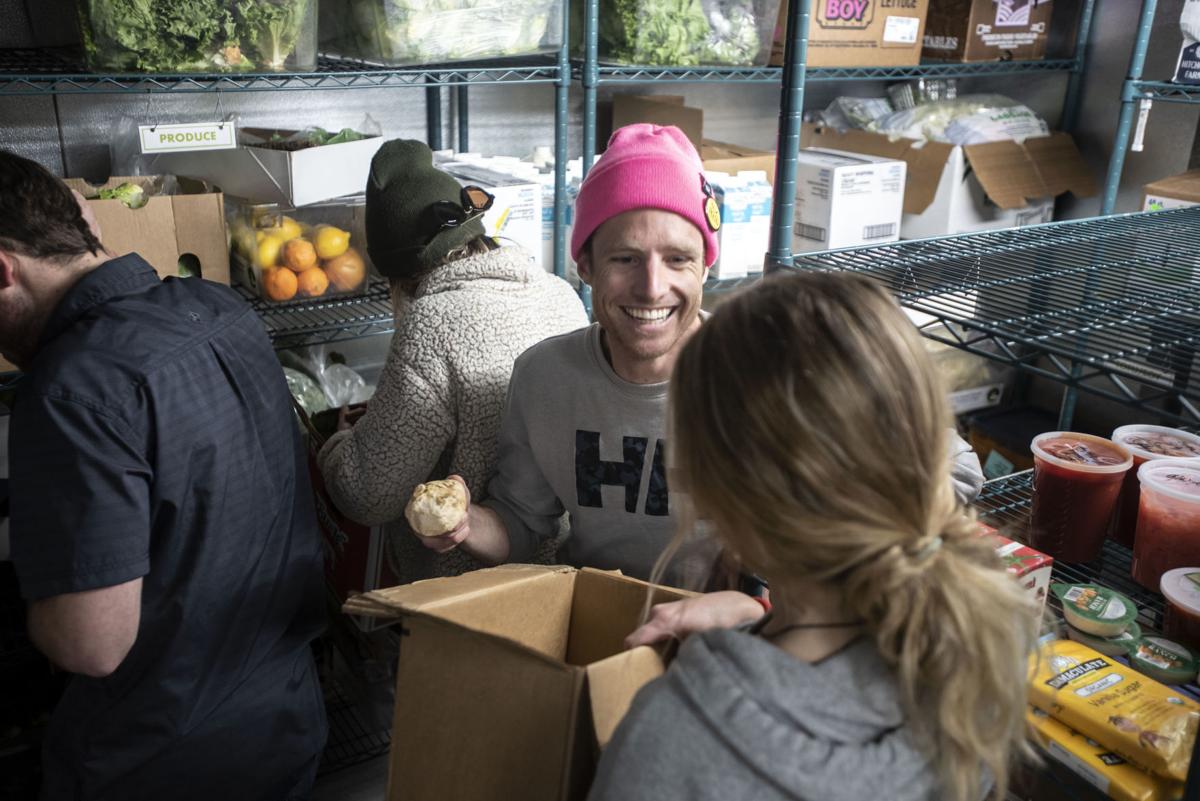 Volunteer Jim Ryan sorts food donated by valley restaurants at Hole Food Rescue. The nonprofit has been the beneficiary of some shifts in giving this year, as the pandemic has inspired some large-scale donations.

Sharel Lund, executive director of One22, packs up grocery bags for families in need during a food giveaway. She said there have been some “major gifts” of five figures that upped the average donation to the organization this year.

Volunteer Jim Ryan sorts food donated by valley restaurants at Hole Food Rescue. The nonprofit has been the beneficiary of some shifts in giving this year, as the pandemic has inspired some large-scale donations.

Sharel Lund was almost at a loss last spring when the Community Foundation of Jackson Hole reached out to her, asking if One22 needed any help preparing for the novel coronavirus crisis.

One22 supports in-need residents, helping them survive in a pricy place like Jackson Hole by chipping in on rent payments, offering translation services and helping stock cupboards (see related story on page 12). Lund knew demand would be spiking due to the economic havoc from COVID-19, but she never fathomed the scope of change that was afoot — or that other organizations would be asking to assist her unsolicited.

“Quite frankly, we were like, ‘Get ready? OK, I guess we better get ready,’” Lund, One22’s executive director, recalled. “And then within a week, the whole world changed.”

The increase in demand for One22’s services was off the charts. In 2019, the nonprofit corporation helped 145 Teton County households with financial aid. During the first 100 days of the COVID-19 crisis, that figure jumped to 1,864 homes. Collectively, they housed 3,956 people — more than 15% of the overall population.

Fortunately and unexpectedly, One22 had the resources to satisfy the unprecedented demand, sprung largely by residents who were furloughed or laid off. Donors came out of the woodworks, including many wealthy residents who made generous gifts. Most had no prior connection to One22.

“We got a six-figure gift from an anonymous donor, with a message saying, ‘This is going to get worse before it gets better,’” Lund said. “A gift like that would have been 10% of our budget last year. We were like, ‘This person must know something that we don’t know. We better get ready.’”

One22’s experience was not unique within Jackson Hole’s social services ecosystem. Justin Farrell’s 2020 book, “Billionaire Wilderness,” popularized the idea that the wealthiest residents in the United States’s wealthiest per-capita county tend to ignore the region’s poorest residents and most acute social problems while pouring their resources instead to environmental causes and the arts. That premise may have generally rung true, but wealthy donors also showed a willingness to pivot and give to people when the need became front and center.

“High-end individuals are looking differently at how they’re giving their money this year,” Community Foundation of Jackson Hole President Laurie Andrews said. “They are very concerned with food insecurity and the health and human services aspect of how COVID has hit our community. I think what we’re seeing is they are continuing to support other areas of interest modestly, but they have upped their giving to health and human services.”

Other nonprofit organizations, like the Fund for Public Education and Hole Food Rescue, have also benefited from the shift in giving. That type of support came through, in Andrews’ view, because affluent residents saw the effects of COVID firsthand — it was their baristas, caretakers and hourly wage workers taking the biggest hits.

“I think there’s a shared experience that has really resonated with everyone in the community, including the large donors,” Andrews said. “They’re not OK that kids are going to go hungry or that people being quarantined are being told to stay in their car.”

Nonprofit staff legwork that preceded the rush of social service giving was minimal, she said. Many of the donated dollars helping keep roofs over residents’ heads and their bellies full came through through unsolicited.

“There wasn’t time to do an appeal or write a letter,” Andrews said. “You’ve got to remember that these nonprofits are the front-line providers. They were dealing with emergency needs and very urgent situations and they didn’t have time for the traditional fundraising outreach.”

At One 22, 69% of the donations that came in during the first 100 days of the COVID-19 crisis were from residents with no history of giving to the organization, Lund said. There were plenty of $10 or $100 donations, but also an abundance of “major gifts” of five figures that upped the average donation to nearly $4,500. The influx of large donations essentially reshaped the organization.

“In February of 2020 our organization approved a $1.35 million annual budget, which was slightly more than last year,” Lund said. “Today, so far, our budget is $5 million.”

That money is not exactly stuffing One22’s coffers. Instead, it’s being exhausted by the exponential increases in demand, like the 1,864 households that were getting rent assistance — to the tune of $1,000, on average, per month.