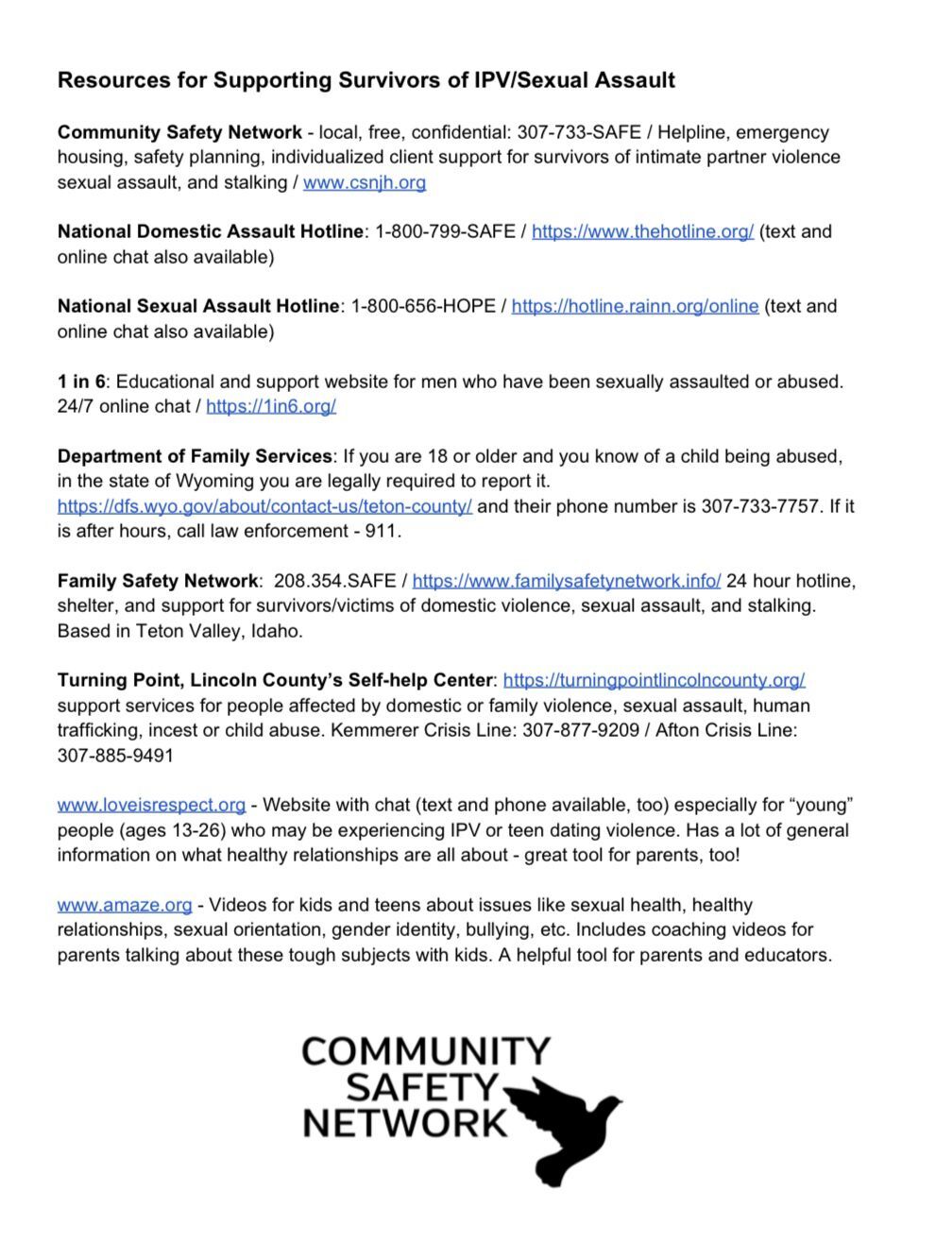 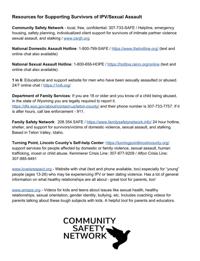 A resource list provided by the Community Safety Network. 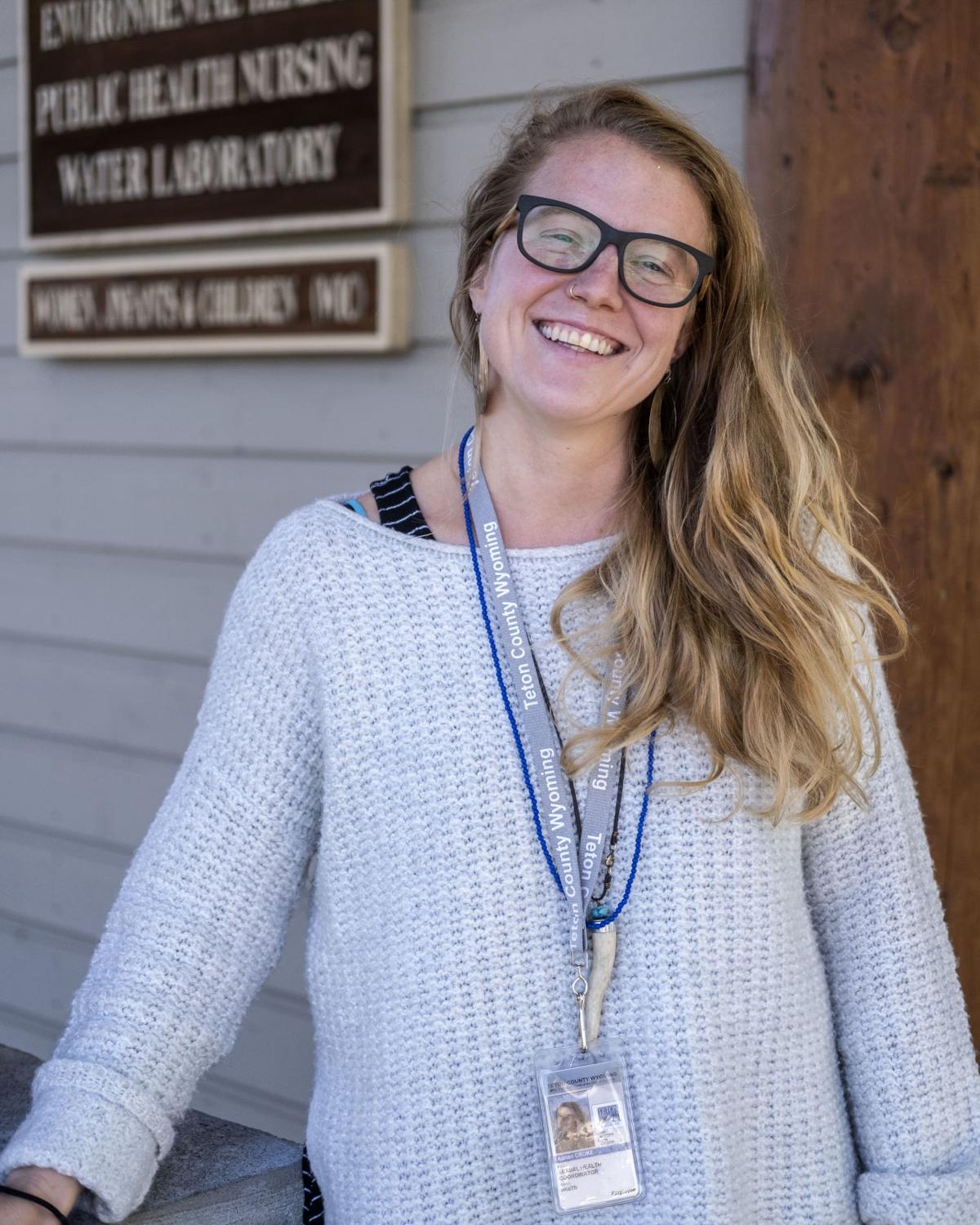 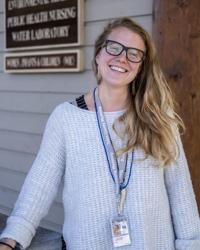 A resource list provided by the Community Safety Network.

The Community Safety Network is encouraging Teton County residents to join it in learning and practicing the best ways to support survivors of sexual assault and intimate partner violence.

At a recent Supporting Survivors 101 presentation over Zoom, Adrian Croke, director of education and prevention for the group, spoke and answered questions about how to support a loved one who’s experienced such trauma.

“Where do we start?” Croke asked the group of about 40 people. “By believing.”

The audience was made up of women and men, several of whom hold office or are running for office.

“As public figures it’s important for us to understand what drives incidents like this and what to say to those who come forward to any of us,” Rep. Mike Yin, D-Teton County, said about his reasons for attending.

Yin, one of a few men who attended the first session, said learning about what the experts know about the motives behind intimate partner violence and sexual assault was especially important.

“The biggest takeaway for me was that it’s always about power and control,” Yin said.

Croke’s presentation began with a survivor’s story and featured definitions of phrases and statistics.

“One in five women have been raped in their lifetime,” Croke said. “And false allegations are no more common for rape than they are for other crimes.”

Croke said studies show false rape allegation are only 2% to 8% of all reports.

She also touched on motives.

“What drives people to abuse somebody else?” she asked. “The short answer is power and control.”

Croke said partner violence is driven by the abuser’s addiction to power.

She also said sexual assault is not a crime of lust or desire. It’s also a crime of control.

“Sexual gratification is not the driving force,” she said.

Croke gave the group ideas on how to respond to a survivor:

“I am so sorry this happened to you.”

“Thank you for telling me. That was very brave of you.”

The way someone reacts to a survivor opening up to them is profoundly important, Croke said.

“I once had a conversation with a survivor who told me when a survivor tells their story — that person has an immense opportunity to make a positive difference,” she said.

Croke also offered examples of what not to say:

“How much had you had to drink?”

“Did you give them the wrong idea?”

“Did you call the cops?”

Croke said responses should be calm and encouraging and they should strive to take the responsibility off the survivor.

“I am so supportive of people telling their story and coming out as a survivor despite all the challenges they face,” Croke said. “But I want to help take the responsibility off them and teach the community how to support them and create safer spaces to tell those stories.”

Croke was an advocate at Community Safety Network for five years before becoming director of education and prevention in July.

She said she’d been working on ideas for community outreach and education events when news broke in August about a joke that was made on the Jackson Police Department Facebook page that said cops were investigating an alleged sexual assault involving a minor, but might need coffee and sprinkle doughnuts to help them figure out if a crime was committed.

Croke said when a survivor confides in you it’s important to be consistent in your support. She said the network’s helpline (733-7233) is there for not just survivors but friends of survivors.

“We know it is affecting their closest loved ones too,” she said.

Croke also encourages sharing other resources, such as the Wyoming Coalition against Domestic Violence and Sexual Assault, the power and control wheel and national hotlines.

“We have so much opportunity in doing simple things,” Croke said. “It is happening all around us to people we know. It’s about just understanding and supporting them through it. You are not causing any harm by believing. But it does cause harm to express or say you don’t believe someone or question their narrative.”