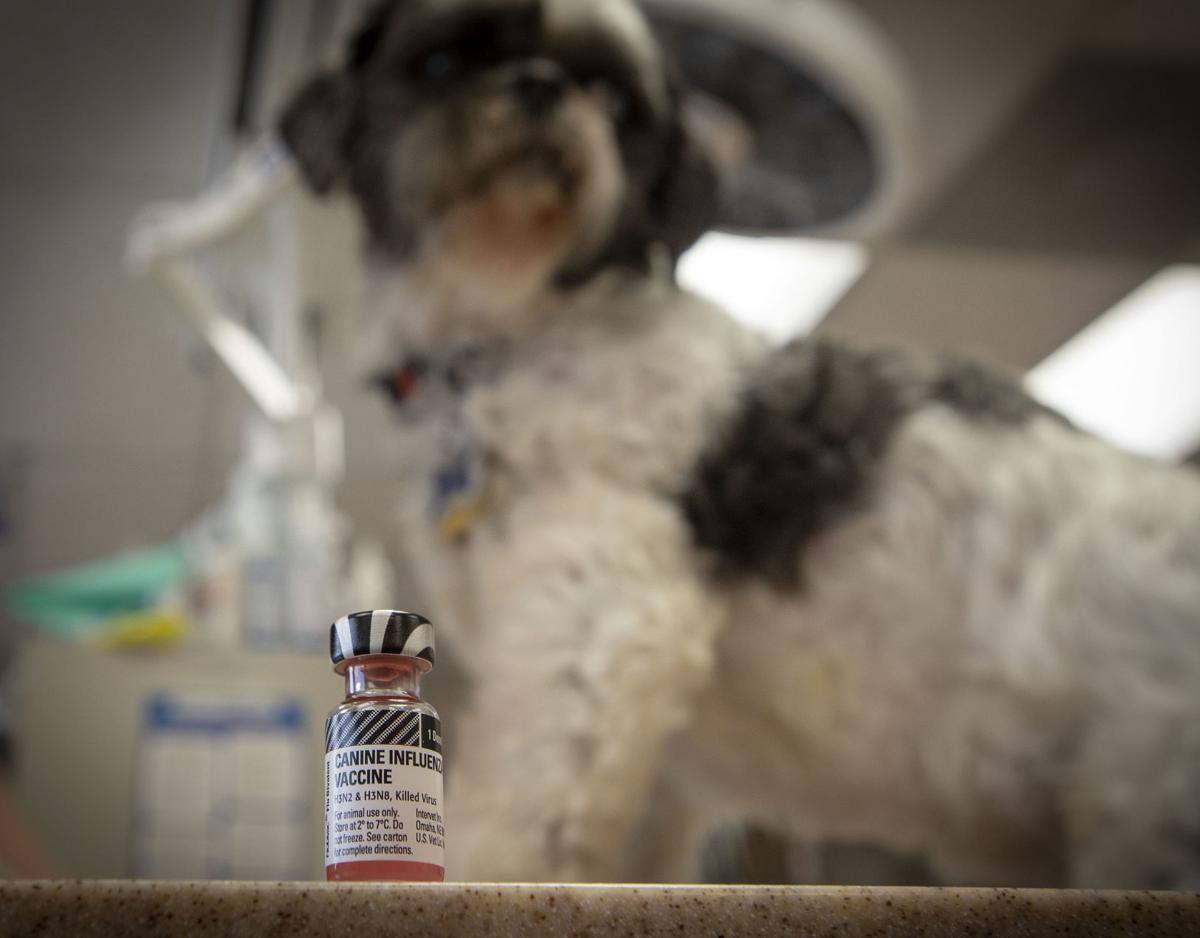 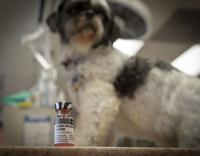 A relatively new strain of canine influenza, H3N2, is making rounds around the country. Local vets are recommending Jackson Hole pets, which are largely unvaccinated against the strain, get vaccinated. 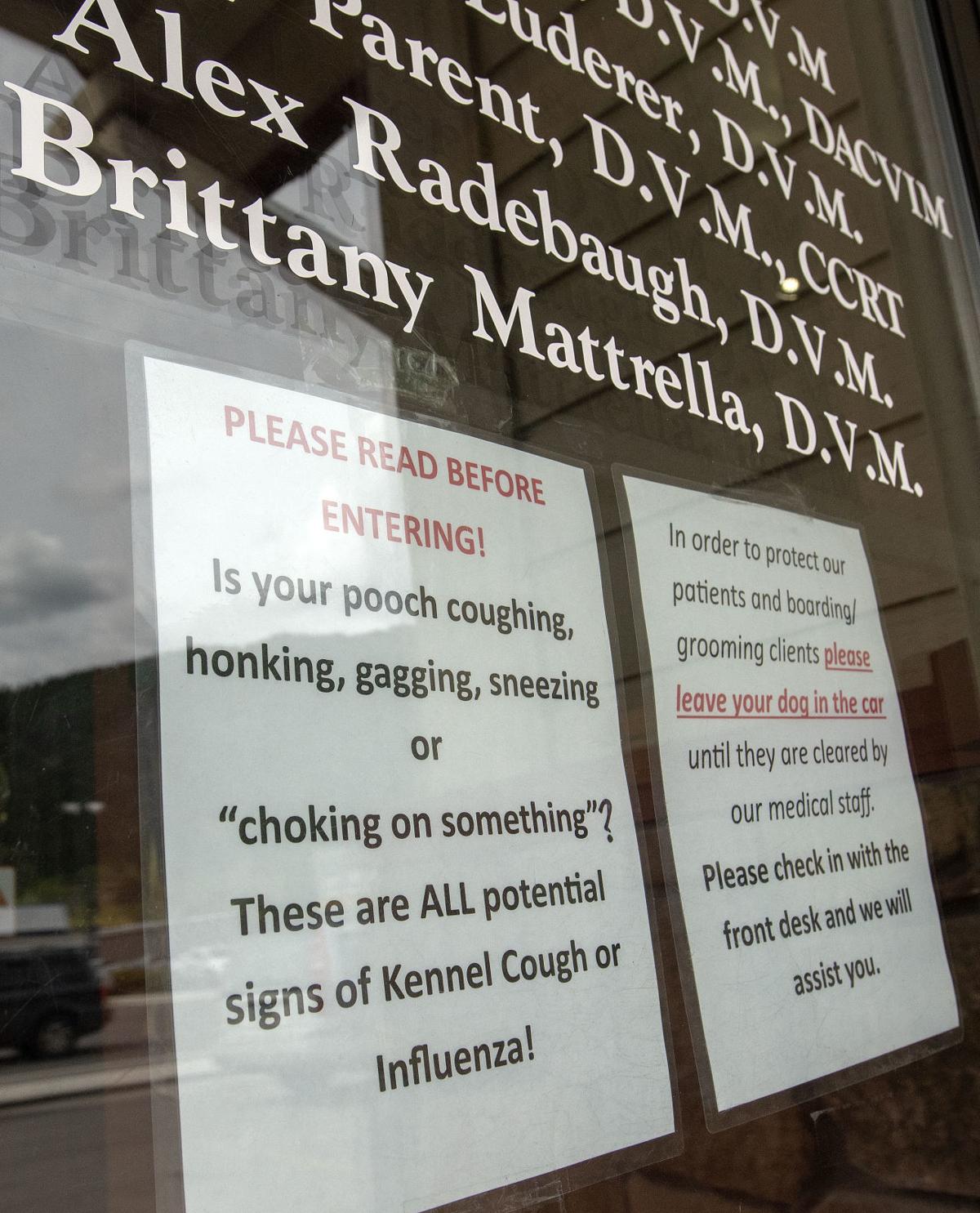 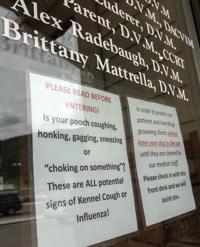 Spring Creek Animal Hospital has signs on its doors warning pet owners of the symptoms of canine flu.

A relatively new strain of canine influenza, H3N2, is making rounds around the country. Local vets are recommending Jackson Hole pets, which are largely unvaccinated against the strain, get vaccinated.

Spring Creek Animal Hospital has signs on its doors warning pet owners of the symptoms of canine flu.

Humans take precautions around flu season by getting vaccinated. Pets can do the same, and with a relatively new strain of influenza circulating around the country, local veterinarians and boarding facilities are recommending it.

H3N2 has not made it to Jackson Hole, at least not officially, but it’s been on the rise across the country since it was first discovered in the Midwest in 2015. The old strain, H3N8, has been around for 10 to 15 years, starting in greyhounds in Florida.

The introduction of a new strain is poised to have a significant impact locally, because the population is largely unvaccinated against H3N2.

“A new strain means animals aren’t immune to it, and it would be very contagious because it’s not recognized by their immune system,” said Dr. M.J. Forman, veterinarian and the co-CEO of Spring Creek Animal Hospital.

Forman and Dr. Katie Alexander, owner of Wydaho Mobile Vet, said cases have been reported as close as Rigby, Idaho. But rather than a cause for alarm, the rise of the new strain is a call to action for pet owners, who need to be educated and know vaccination options for their animals.

“Just like people know from flu in humans, just because you get the flu doesn’t mean you’re going to get really sick and die from it,” Alexander said. “The lifestyle of the dog makes a difference.”

Dogs don’t have to mingle with a dog that looks or sounds sick for the damage to be done from canine influenza. Dogs are nonsymptomatic for three to seven days beforehand, but the virus can be shedding at the time.

“If a dog licks something, sneezes or releases saliva droplets from panting, it’s contagious for days,” Alexander said. “They are most contagious before they start showing symptoms.”

Jackson’s transient population and number of visitors increase the likelihood that social dogs may come in contact with the flu.

“We have all of these people coming in and out,” Forman said. “If one dog comes from an area where flu is common, and their dog was in a doggy park, that’s all it’s going to take.

“Because we have so many travelers we’re just at a higher risk for that happening. It would be pretty devastating here because it’s such a social dog town and it has the potential to go pretty quickly. Prevention is key.”

being too social is risky

Pam Boyer, the owner of Trail Creek Pet Center, a boarding and grooming facility in Victor, Idaho, knows firsthand that too much doggie interaction is a bad idea when it comes to controlling disease.

Shared water dishes, for example, are a no-no for Boyer.

“It’s like taking a glass of Kool-Aid, one cup, putting it down in the middle of daycare center and letting all 25 kids drink out of it,” she said. “It’s disgusting. But that’s the reality of it.”

Boyer said she’s always been on high-alert when it comes to canine socialization and the negative effects it may have. Trail Creek doesn’t have large play groups, for example, which Boyer called “nothing more than a petri dish.”

With canine influenza on the rise she’s become more diligent.

“I’ll walk away from business any day,” she said. “We’re going to do our best to control this.”

A bivalent vaccine is recommended for pooches because it provides immunity for H3N2 and H3N8. While a shot won’t prevent the flu, it’s more likely to reduce the severity and duration of symptoms.

Full immunity isn’t expected until after a booster is given two to four weeks after the initial vaccine.

“Because our population has not been exposed to this virus yet, we want to get as many people as possible to vaccinate,” Forman said.

Spring Creek Animal Hospital encourages vaccination for those with “high-risk” pets: those in doggie day care, those that frequent trails with a lot of dog traffic and those that board. Other highly vulnerable pets are puppies, senior dogs and those with otherwise compromised immune systems.

With vaccination, Forman said, “if we see an outbreak, we’re not going to see as many dogs who are as sick.”

It’s also worth noting that, as with the human flu, different strains aren’t always covered.

“Strains can change really easily and quickly,” Alexander said. “It’s a virus that changes quickly, so that makes vaccination less foolproof than it is for other things.

“But a respiratory vaccine is a great option for dogs that are getting a lot of social contact from other dogs or are just in places where other dogs are,” she said.

In dogs that come down with the flu, the disease looks a lot like kennel cough.

Symptoms include coughing, retching resembling vomiting (but only foam is produced) and discharge from the eyes. Severity can vary.

There’s no antiviral like Tamiflu to give to dogs. But if there is an infection, IV antibiotics can be given.

Usually curiosity, and the money to back it up, is the only reason owners might decide to test for the flu because testing doesn’t change the course of treatment.

But if you’re about to travel with your dog, bring a new dog into your home or live with roommates who also have dogs, Alexander said testing is something to consider.

“All vets would be psyched if you asked for a nasal swab and asked what pathogen is causing this,” she said. “But in my professional experience that’s rare.”