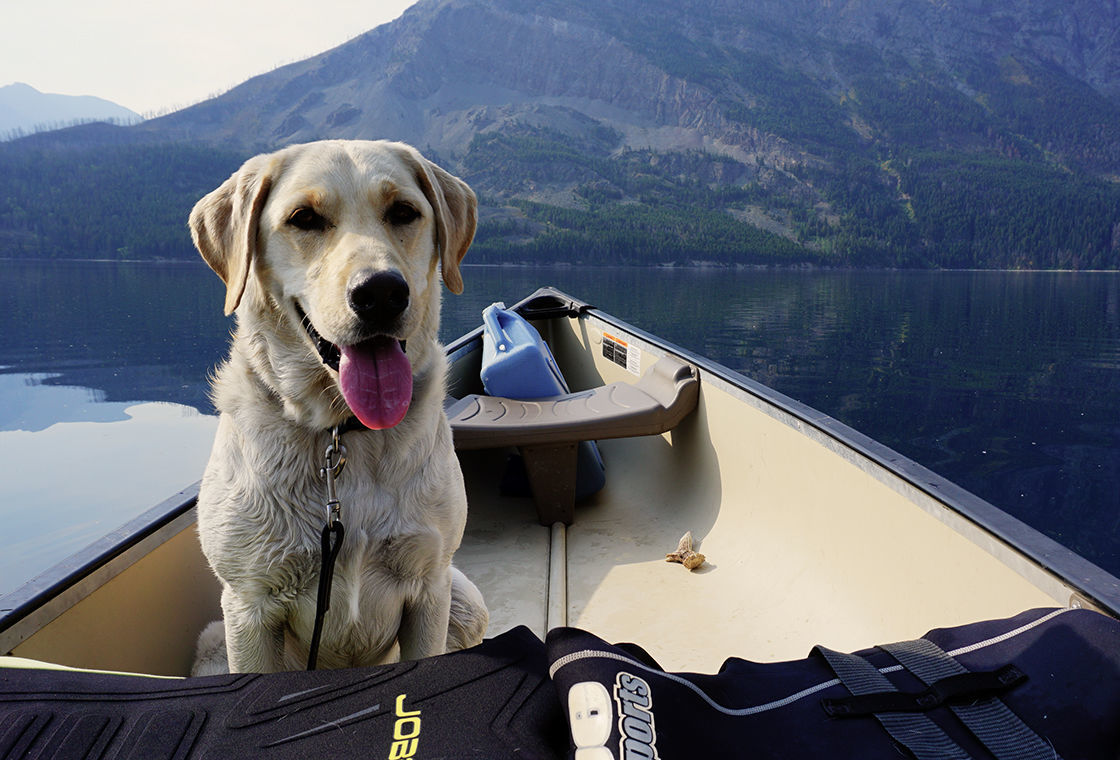 Working dog Tobias is a pro at sniffing for invasive species. Typically, he is deployed at watercraft check stations in and around Glacier National Park, where he searches for invasive mussels. 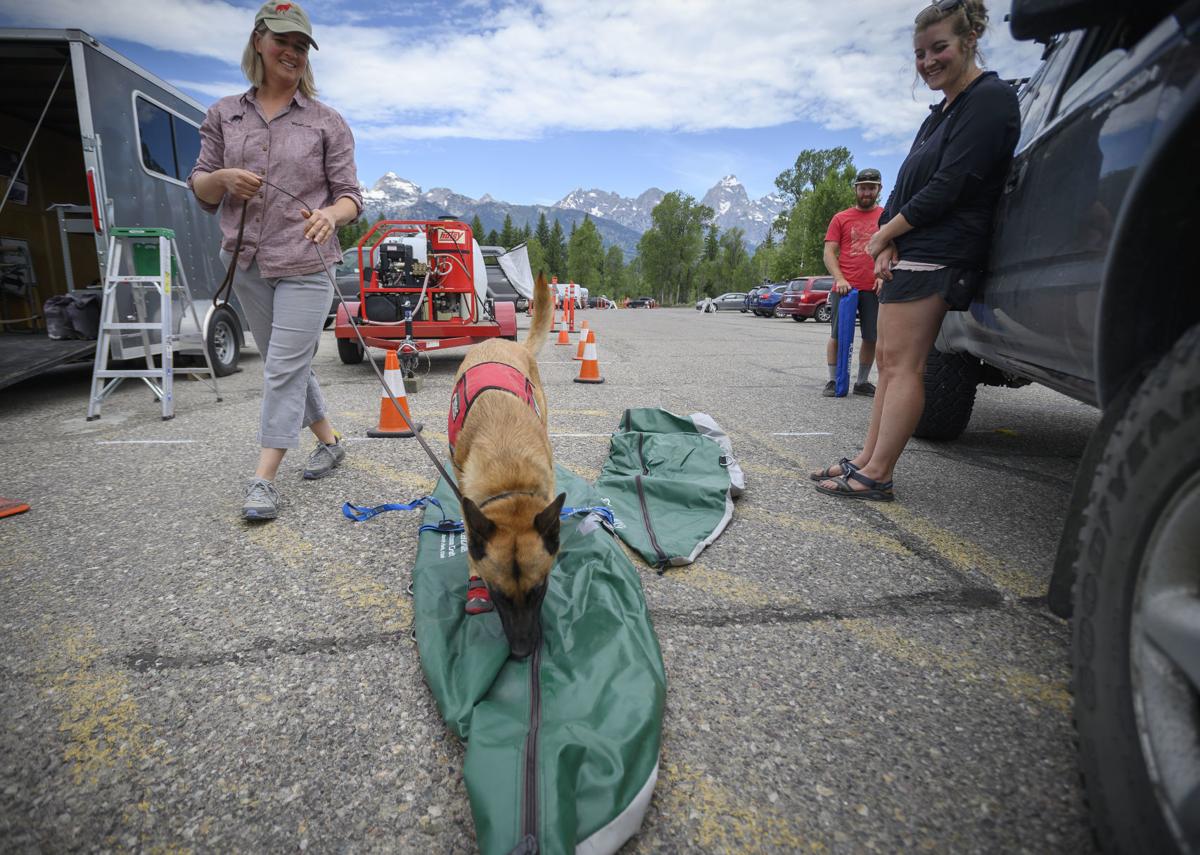 Jax, who is trained to sniff out aquatic invasive species, checks out an inflatable watercraft with her handler, Amiee Hurt, last summer in Grand Teton National Park. Hurt and Jax were inspecting watercraft in Grand Teton as part of a partnership between the park and Working Dogs for Conservation. Acute olfactory senses and an ability to detect pheromones make dogs ideal for conservation work. 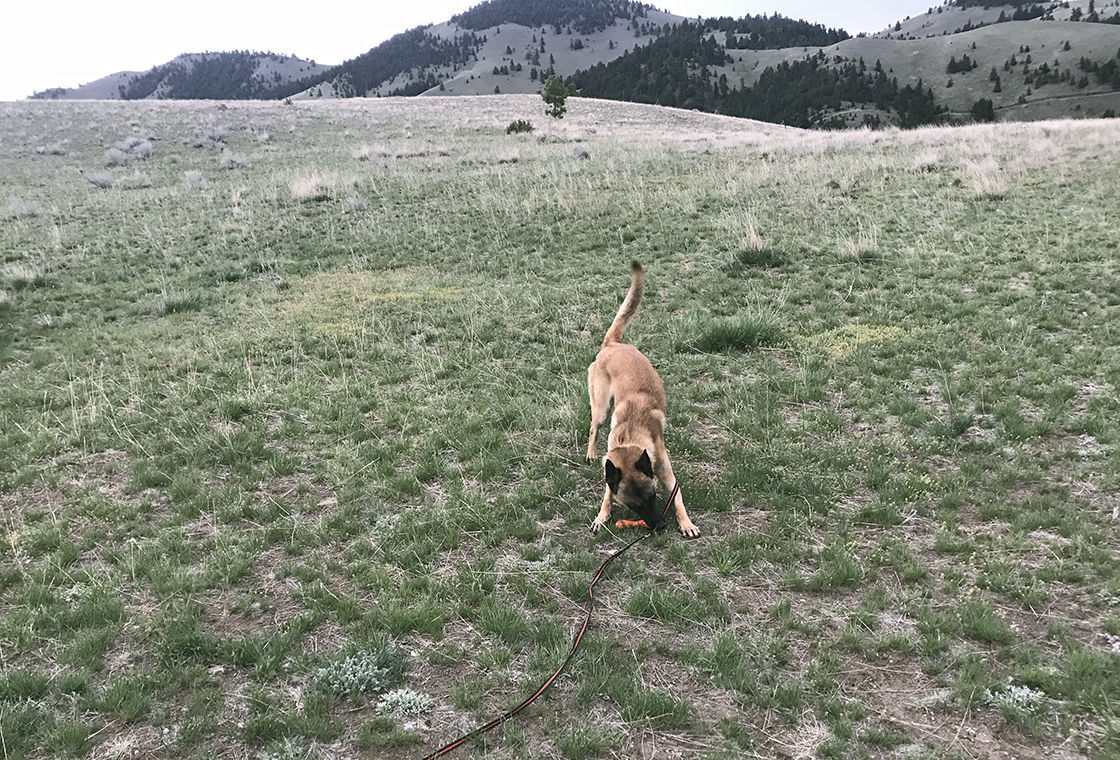 Working dog Tobias is a pro at sniffing for invasive species. Typically, he is deployed at watercraft check stations in and around Glacier National Park, where he searches for invasive mussels.

Jax, who is trained to sniff out aquatic invasive species, checks out an inflatable watercraft with her handler, Amiee Hurt, last summer in Grand Teton National Park. Hurt and Jax were inspecting watercraft in Grand Teton as part of a partnership between the park and Working Dogs for Conservation. Acute olfactory senses and an ability to detect pheromones make dogs ideal for conservation work.

Efficient, trustworthy methods of detection are likely not people’s first thought when they look at a dog. However, a dog’s nose is proving to be a tremendous tool in conservation efforts.

Working Dogs for Conservation had expected to deploy dog and handler teams in July to Shirley Basin, sniffing out black-footed ferrets. Canines can detect ferrets’ presence in their burrows, so conservationists don’t have to wait for them to come above ground to know they’re present.

That’s been put on hold, because the ferrets can get COVID-19. It’s imperative to avoid infecting the endangered species that once was at the brink of extinction. But that’s not the only kind of projects dogs can handle.

Previously, Working Dogs for Conservation was contracted by Yellowstone and Grand Teton national parks to check boats for aquatic invasive species, most notably the zebra mussel.

Kayla Fratt, communications and outreach coordinator for Working Dogs for Conservation, worked in the parks with her dogs Barley and Tobias. They were stationed at watercraft checkpoints for around 14 days, sniffing out potential invasives faster than their human counterparts could spot them.

A project scheduled for August aims to detect salt cedar, an invasive shrub, along the edges of rivers in Wyoming. Handler and dog will paddle down rivers in search of salt cedar patches.

That project is ideal for using the dogs. They excel at finding small groups of a species rather than a large swath.

“When you’re trying to find either the last of an invasive species after an eradication attempt or those first pioneers,” Fratt said, “that’s where the dogs are really helpful.”

Acute olfactory senses are responsible for dogs’ accuracy and efficiency on the job.

Dogs have about 300 million receptors in their noses, compared with a mere 6 million in humans, according to a 2012 article by Peter Tyson for the Nova Science Trust.

Plus, dogs have something we don’t: the ability to distinguish pheromones, a chemical substance released by animals and detected by others around them.

That ability to detect pheromones could be helping dogs achieve success at conservation work. Fratt thinks it might help them distinguish between scat of different species, exemplified in a previous project when they were able to tell black bear scat from grizzly scat. Labs can then analyze the scat to find out what the animal has been eating, what other animals it’s been around and the hormonal levels, Fratt said.

“They’re living beings, and they’re not machines,” Fratt said. “They can get sick, tear a toenail. They can just have a weird day.”

She explained that not every dog is right for the job either, and finding the proper fit can be a challenge.

Working Dogs for Conservation employs rescues for its program, partnering with shelters to pick out dogs with the right personality.

Sometimes dogs are just not the best solution for a problem.

“There are just some targets that don’t have a whole lot of scent,” Fratt said.

That was evident in a pilot study looking for bumblebee nests. She said the dogs would practically need to stand on top of the tiny nest hiding under leaf litter to smell anything.

Risk plays an important role too. The organization doesn’t want to endanger its canine coworkers.

“We were kind of speculating about whether the dogs would be useful for finding these murder hornets coming over from Asia,” Fratt said. “Almost immediately we decided no. They don’t want their dogs going up to a murder hornet.

The biggest benefit to using the dogs versus the other methods, Fratt said, is that they qualify as a noninvasive conservation approach. Much different from having to tranquilize an animal to collar it.

“The advantage of dogs is unlike a camera trap, or a person with a spotlight, you don’t have to be there at the exact same time as the individual animal,” Fratt said.

These dog detectives and their super sniffers could prove to be science’s best friend in studying and protecting native species.