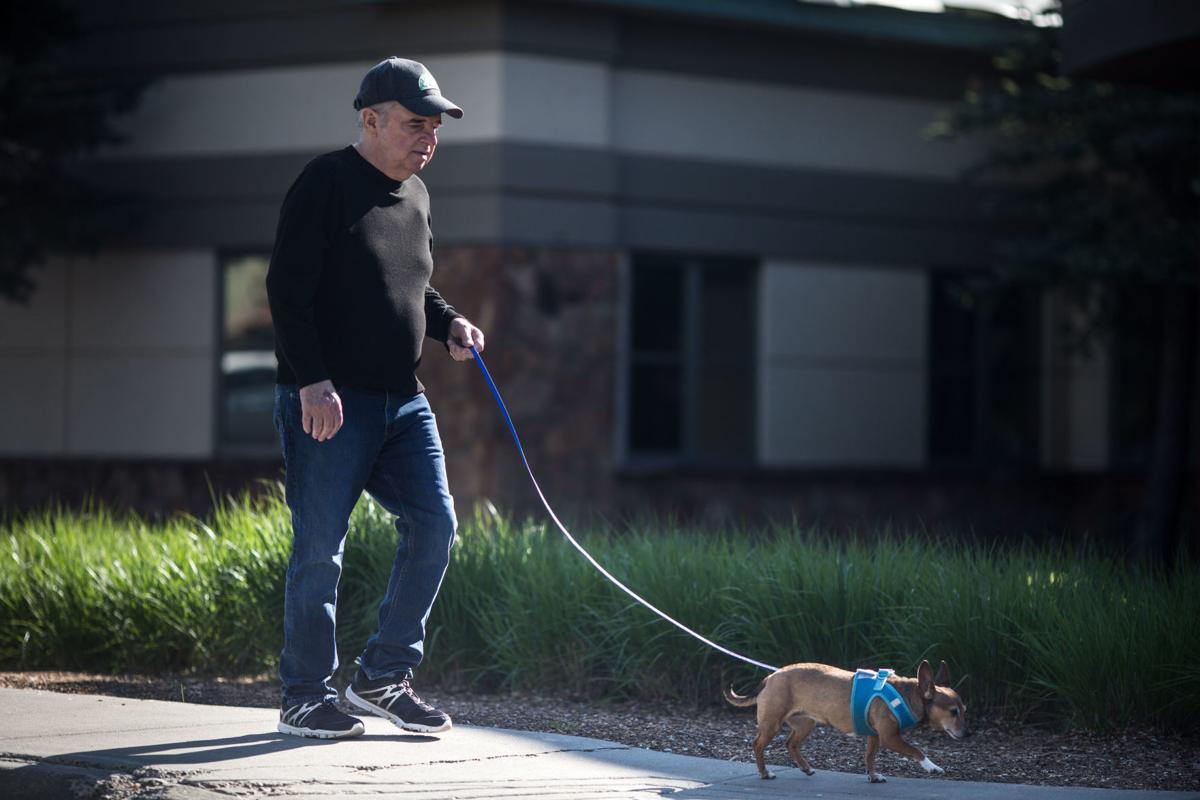 Danny Keller walks Joey outside St. John’s Living Center in early June. Keller and the little 8-year-old dog have walked together two to three times a week since she arrived at the Living Center in January as part of the SeniorPAWS fostering program. 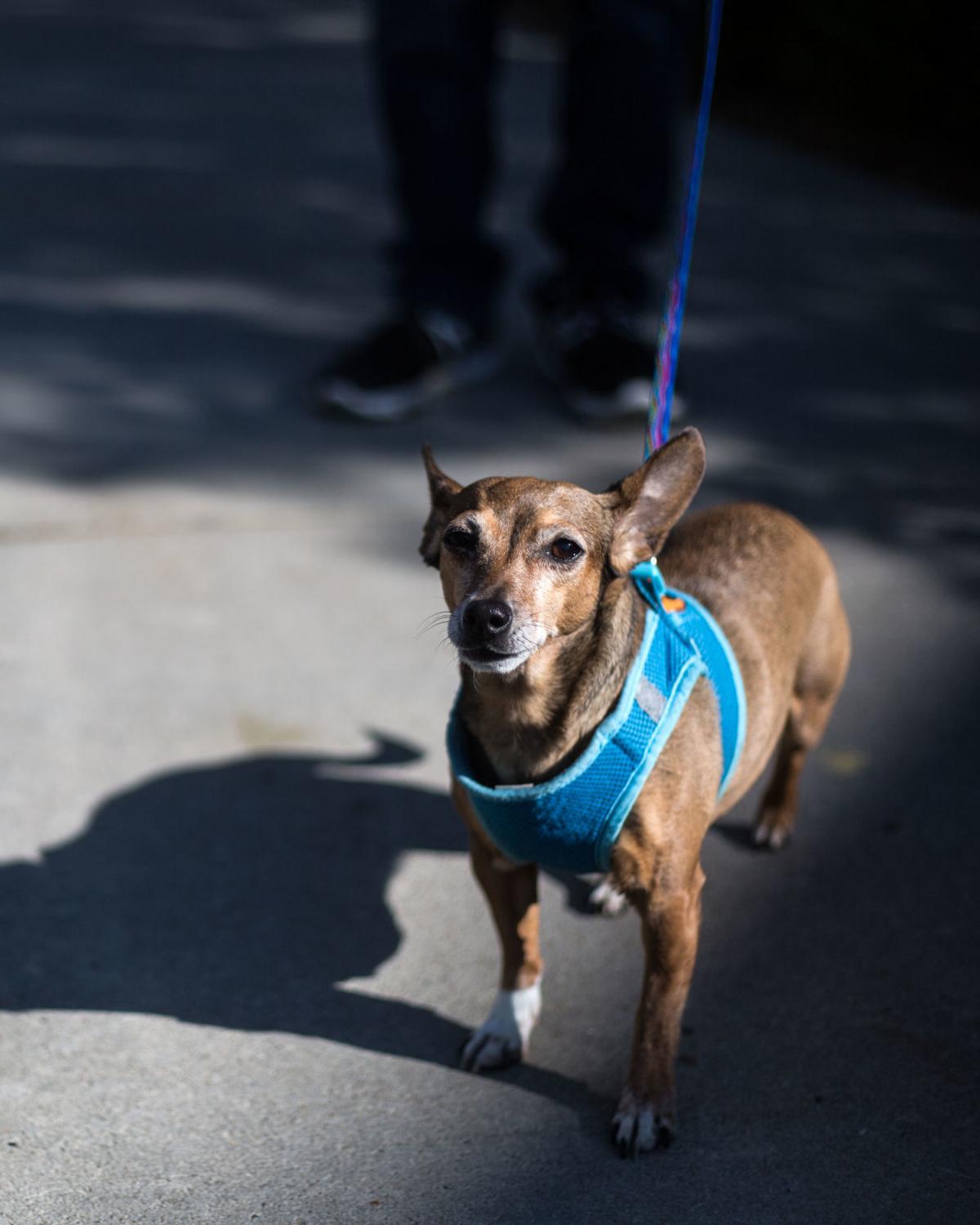 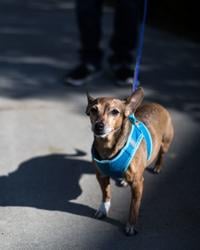 At the request of a number of St. John’s Living Center residents, Joey was adopted and now lives there permanently.

Danny Keller walks Joey outside St. John’s Living Center in early June. Keller and the little 8-year-old dog have walked together two to three times a week since she arrived at the Living Center in January as part of the SeniorPAWS fostering program.

At the request of a number of St. John’s Living Center residents, Joey was adopted and now lives there permanently.

In the first few months of this year, Nancy Rufener lost a dog, a partner and a best friend.

To be clear, she said goodbye to three different loved ones — her black Lab, Sammy, her life partner, Danny Gardiner, and a close companion from her pre-Jackson days in San Diego.

As if that tragic triad wasn’t enough, it transpired against a backdrop of virus-induced isolation. The onset of the COVID-19 crisis forced Rufener to grieve in quarantine.

But she didn’t have to grieve alone. Just in time she found a new friend, one who would sit beside her in her darkest moments, or curl into her lap and lick the tears from her face.

She adopted Laverne, an 8-year-old Jack Russell terrier mix, after they met at St. John’s Living Center, where Rufener visited Gardiner during hospice care. The pup was living there as one of the pioneers of a new program, SeniorPAWS, through which the nursing home fosters dogs while they await adoption, brightening the residents’ world in the process.

Actually, according to Rufener, “Laverne adopted us.” The little dog had already been at the center about a week when Gardiner checked in, but she hadn’t formed a deep bond with any particular person. It seemed she’d been waiting for the newcomers.

“One night she just barged into the room and got on Danny’s bed,” Rufener said, “and that was it. She didn’t want to go with anybody else.”

On another night, around 2 a.m., an alarm for one of Danny’s medications went off. Laverne switched into watchdog mode, growled at the alarm, then jumped onto the bed, apparently guarding the human she had taken in her charge. Rufener watched in amazement, thinking, “Dang, I need this dog.”

When Danny died shortly after, several families had already shown interest in adopting Laverne. But one by one, for one serendipitous reason or another, they all backed out. As soon as Rufener heard, she called Jess Farr, the program director at the nonprofit PAWS of Jackson Hole.

She wasn’t about to argue with fate.

Once Rufener had signed the adoption papers, Farr recalled, “she said something to me that took my breath away: ‘I walked in here with one life partner and I’m walking out with another.’”

The day the two went home together marked the program’s first success. Laverne found a temporary home and rejuvenated the Living Center, where loneliness and boredom are common among residents. Then she went on to a permanent home, and a home where she made all the difference.

“Animals have a healing power,” Farr said. “They really, really do. And she figured out who needed her most.”

With Laverne, the people behind SeniorPAWS did precisely what they set out to do, and what they hope to replicate. With Joey they failed.

Failure is a technical term here, though. When a foster family, or nursing home, becomes so hopelessly attached to an animal that they can’t bear to see the creature go, the incident is half-jokingly deemed a “foster failure.”

That was the unsurprising outcome of Joey’s arrival at the Living Center early this year. The 8-year-old Chihuahua-miniature pinscher mix swaggered in “like she was meant to be there forever,” Farr said. Without hesitation she cuddled up to her new human roommates, and they, for their part, were smitten.

“Joey brings joy to everybody,” said John Paul Trudelle, 80, who has lived at the center for just over a year. “I think she’s the right dog and the right conditions. Just perfect.”

She’s become a sort of mascot, not to mention Employee of the Month (a distinction that came with a signed letter from St. John’s Health CEO Paul Beaupre, despite the fact that Joey barks at him whenever he comes around).

While the staff see to most of her day-to-day needs, the residents take her for walks and feed her treats, along with scraps of food from their own meals. Since the pandemic compelled them to eat in their bedrooms, Joey has taken to roaming the halls and poking her head in wherever she can find crumbs, not without encouragement.

“She loves to mooch,” Trudelle said. “She looks at me very sad and hungry. But a pet is a pet. What are we supposed to do?”

With canine charms like that, it didn’t take long before a “parade” of residents filed into the office of Malenda Hoelscher, the director of the Living Center, to let her know Joey had to stay.

“We had residents threatening to leave if we did not adopt her,” said Connie Hansen, the center’s life enrichment director.

Kate Wienman, a speech pathologist at the Living Center who devised the idea for SeniorPAWS, said it’s not just the residents who stand to gain, either.

She and the rest of the staff have enjoyed the dogs just as much, as have visiting friends and families. Many say a stronger sense of community has formed around Joey.

“It feels more like home when you have animals around,” said Danny Keller, 76, another resident.

The SeniorPAWS program also aims to integrate the Living Center with the broader community of Jackson Hole by giving the residents a role in finding the right home for the dogs they foster. Once they’ve spent two weeks with an animal, it’s listed for adoption and residents get to meet and talk with prospective families.

Coronavirus put a damper on the program for a few months, as staff debated when it would be safe to bring in more dogs. But it’s back on track, with the newest addition being Jack, a 10-year-old Jack Russell terrier-Chihuahua mix from El Paso Animal Services. (The small-dog trend is deliberate. Farr vets and selects only those animals that will get along with the elders: not too big, well-behaved, energetic but gentle.)

Though the program is still fresh, its first success seems a tribute to its potential to unite people and animals in a way Farr calls “symbiotic.” Human and dog each offer the other something vital to their well-being.

Residents say Joey is a constant source of happiness at the Living Center. And whenever Nancy Rufener’s thoughts turn dark, comfort and laughter are only as far away as her new companion. Even if Laverne is a bed hog, even if she seems to be constantly on a mission to trip her human in the kitchen, she has helped Rufener through this period of loss as only a dog can.

“Without her I don’t know what I would have done,” Rufener said. “She’s one of the reasons I get up in the morning and get on with the day.”