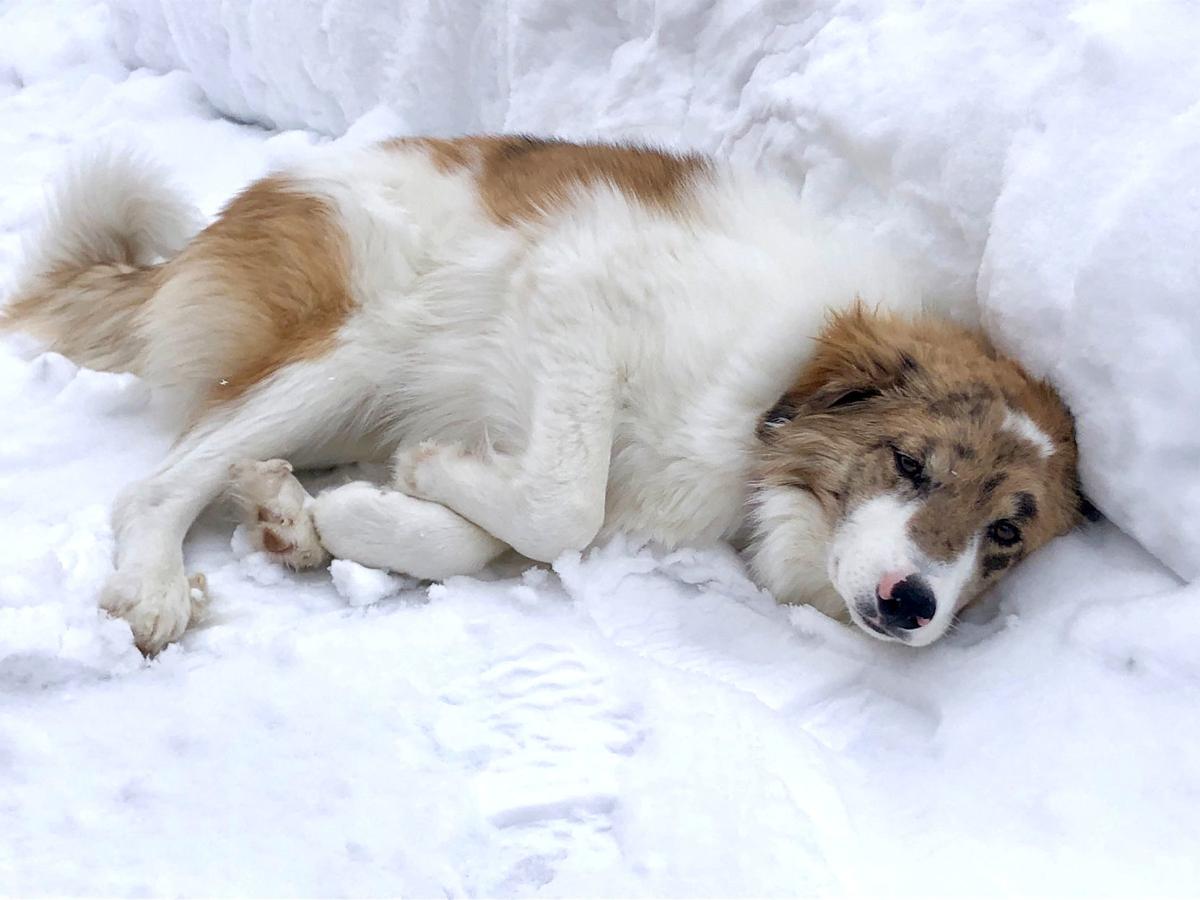 Annie Riddell estimated Maisie, her Great Pyrenees, Australian shepherd and border collie mix, is about a year old. Riddell has pet insurance for Maisie because her past dogs — a purebred golden retriever and Bernese mountain dogs — had serious health complications that resulted in short lives. 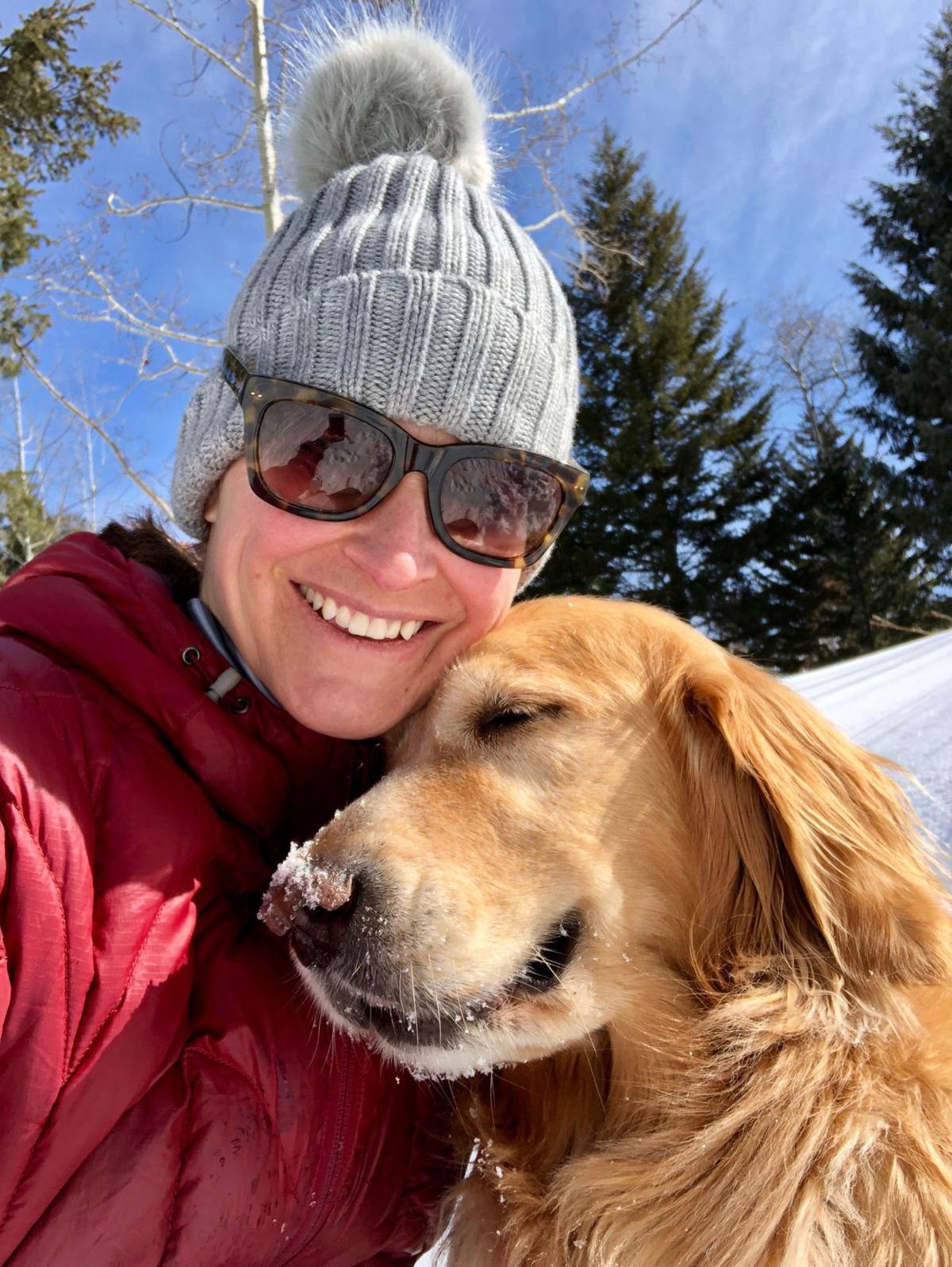 Riddell and her purebred golden retriever, Pearl, who died from cancer when she was 7 years old. Riddell said having pet insurance was the “silver lining.”

Annie Riddell estimated Maisie, her Great Pyrenees, Australian shepherd and border collie mix, is about a year old. Riddell has pet insurance for Maisie because her past dogs — a purebred golden retriever and Bernese mountain dogs — had serious health complications that resulted in short lives.

Riddell and her purebred golden retriever, Pearl, who died from cancer when she was 7 years old. Riddell said having pet insurance was the “silver lining.”

Annie Riddell and her family have had a lot of dogs.

There was a Bernese mountain dog, Maddie, another Bernese, Birch, and a golden retriever, Pearl, before Maisie, a Great Pyrenees, Australian shepherd and border collie mix.

But owning and taking care of those canines hasn’t always been a breeze. There’s been heartache (and medical bills) along the way.

The first three dogs — large purebreds with a predilection for health problems like hip dysplasia and Von Willebrand’s disease, among others — were diagnosed with various forms of cancer. Maddie died at 7 years old. Pearl at 5. Birch at 4.

Those deaths were all part of a series of what Riddell called “health heartbreak.” With Maddie, the family’s first dog, she didn’t have pet insurance.

“I sort of expected to have an encounter with cancer or some other large-breed dog health issue at some point in her life,” Riddell said. “I just didn’t expect it to be that early on. There were just a whole lot of expenses I couldn’t have expected, given the timing.”

Having to pay for Maddie’s treatment and then say goodbye to her was a double blow.

“It was just an insult to injury,” Riddell said.

Since Maddie’s run-in with cancer, Riddell has purchased pet insurance for Birch, Pearl and Maisie. When Birch and Pearl came down with their own illnesses those policies were a lifesaver for the family. Even though both dogs died at a young age (even for their breeds’ relatively low life expectancies), having pet insurance meant Riddell avoided being hit both with grief and a substantial pile of bills.

With Birch, Riddell tried Veterinary Pet Insurance, now rebranded as Nationwide Pet Insurance, whose reimbursement process she found to be “frustratingly inconsistent and painstaking.” She switched to Embrace when her family adopted Pearl. Though it came at a tough time, her experience with the company — which covered nearly 80% of over $10,000 in cost — was much better.

“The silver lining was that it wasn’t such a grievous financial loss,” Riddell said.

Veterinarian Dr. Dan Forman, hospital director at Spring Creek Animal Hospital, has treated all of Riddell’s four-legged family members. Though he recommends insurance to all pet owners — Spring Creek treats small animals and exotics (and the occasional injured wildlife) — he said dog owners are the most likely to pick up a policy.

But there are caveats.

“We don’t know whether that dog will live to be 10 or 16,” he said. “Say the owner pays six months of premiums and their dog has a $3,000 medical problem. We don’t have to be in the insurance industry to realize that wouldn’t be sustainable over a large sample size.”

For a puppy, though, insurance companies can expect 10 or so years of payments, whether policyholders pick up wellness or catastrophic coverage. Forman recommended the latter for patients with active dogs. A CCL tear — the canine equivalent of an ACL tear — and other sports-related injuries are common in the valley.

“I think the premiums are appropriate based on the coverage and, as our parents taught us, you really do get what you pay for in life,” he said.

There was also a long list of exclusions, which Forman called “astounding.”

“Buyer beware,” he said. “If you do your homework, you’re more likely to end up with an insurance company and coverage that you’ll be happy with.”

But even though “no policy is perfect,” Forman said, some are better than others. Forman recommends Trupanion, Nationwide Pet Insurance and Embrace, the company Riddell and her family use, to most of his clients. (He has no ties, financial or otherwise, to any of the three firms.)

While all three companies provide catastrophe-oriented policies, Forman said they tend both to be amenable when covering expensive surgeries and to provide excellent financial coverage.

Forman said potential pet owners should do their research before buying a pet, particularly by looking into breeds and their associated diseases to know what sort of liabilities to expect down the line. Adoption, he added, is also a great option.

Riddell took both of those recommendations — and the heartbreaking experience she had with her past purebreds — into consideration when her family adopted Maisie. She said the benefit of pet insurance compared with its cost is “limitless.”

“Having had so many losses, I know what the financial repercussions of an ill dog can be,” Riddell said. “You really don’t know how vet bills accumulate. … I don’t think I could go without it.”