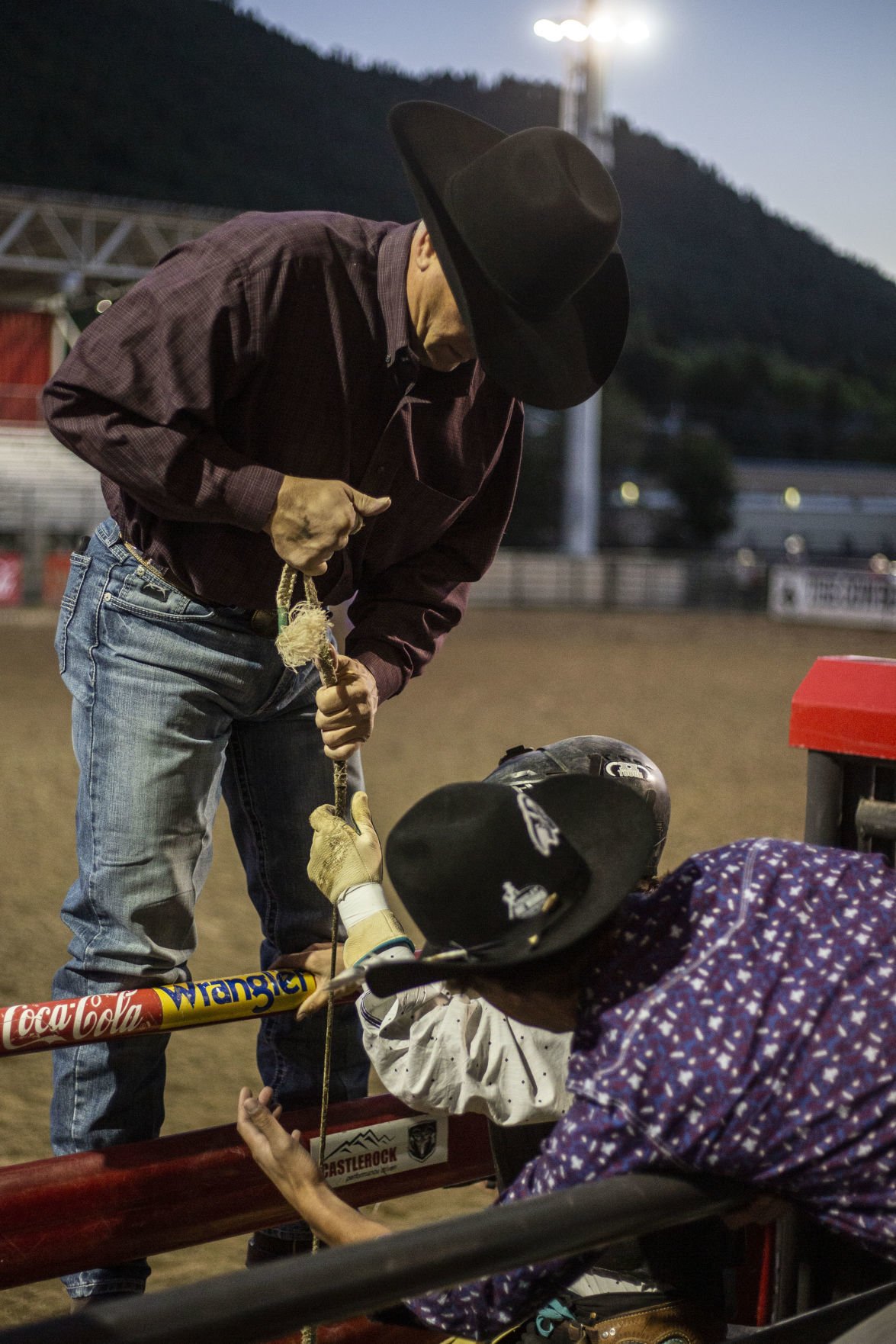 A bull rider gets help with his rigging during last summer’s Jackson Hole Rodeo. 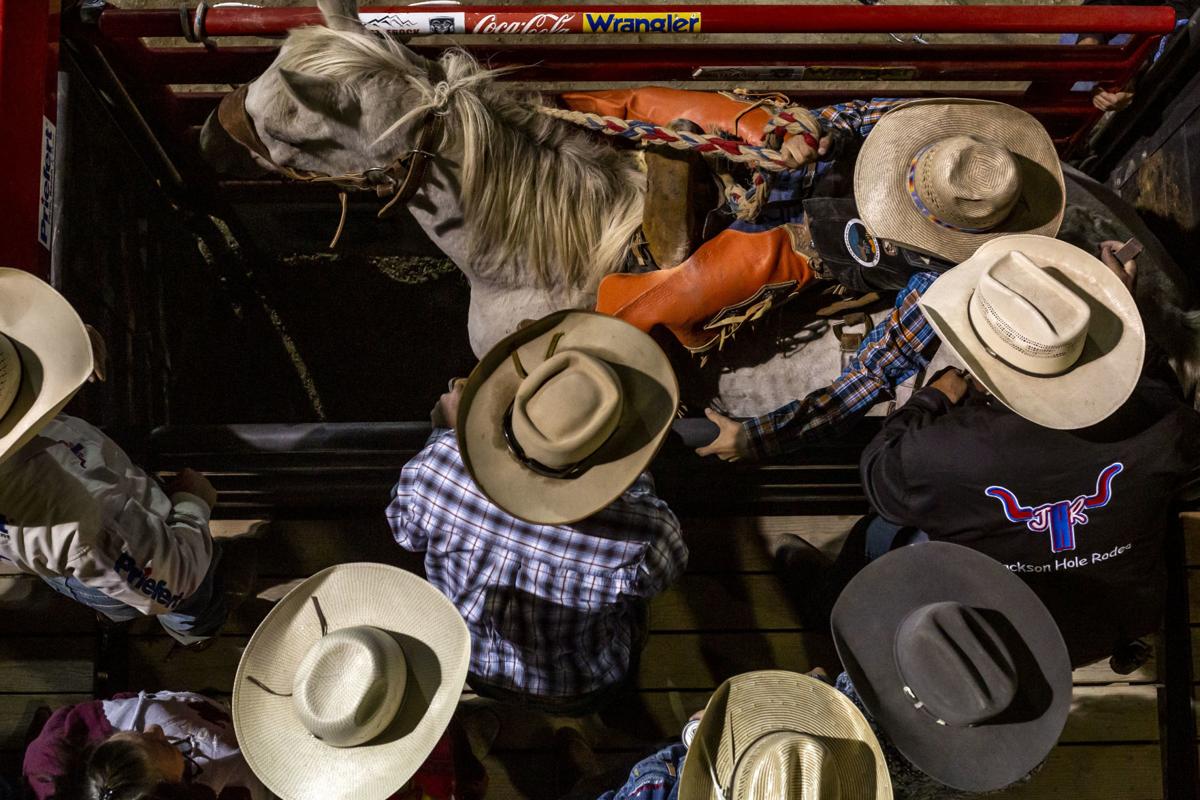 There’s never a shortage of help getting a rider onto his stock in the bucking chutes.

A bull rider gets help with his rigging during last summer’s Jackson Hole Rodeo.

There’s never a shortage of help getting a rider onto his stock in the bucking chutes.

"Heeya!” came the shout, and in a flash the iron gate flew open and the bull burst into the arena, fiery and flailing, a cowboy clinging to its back.

That is what the audience saw at a September 2018 Jackson Hole Rodeo.

What they didn’t see were the hours of backstage orchestration that brought human and beast together for this spectacle of Western spirit.

“It’s kind of an art form,” Brandon Wilson said earlier that afternoon as he navigated the cattle chutes, a labyrinth of metal fencing through which he and the rest of the rodeo crew steer the stock, sorting them according to their speed, strength and temperament.

“It’s always kind of a challenge to make sure you get everything set up right,” Wilson added. “A lot more goes into it than a guy thinks.”

Bodie Wilson, Brandon’s brother, let down the ramp from their livestock trailer, and its occupants filed toward the chutes. The gate opened with a mighty unoiled groan, and the cattle trotted in, raising dust clouds as they jostled.

Then Brandon Wilson began directing the animals to the proper pens. He can tell at a glance where to send each one, based on a deeply ingrained familiarity.

“That’s just a lot of time going through ’em,” he said.

It’s not surprise, considering he was born and raised in the family that has run this rodeo for more than a century. He knows them as well as a father knows his children — their personalities and abilities, which ones get along and which ones must be kept separate at all costs. One cantankerous old bull needs a pen all to himself after he gets out of the arena, because “if he gets mad he’ll hurt one of [the others], he’s such a big dude.”

Brandon Wilson’s understanding of the cattle extends even to what may seem trivial details to the uninformed, like their handedness.

“Animals are just like humans: They’re right- and left-handed,” he said. “Some do better out of the left, others out of the right.”

Accordingly, there are two sets of chutes, one for each.

All that information stored inside the heads of the people behind the scenes adds up to a smooth-running rodeo. Long before the crowd arrives the bulls are where they need to be to enter at the right time, for the right cowboy.

And once showtime approaches, timing is key. Everything must move seamlessly. One cowboy launches into the arena astride a bucking bull, and as soon as his run is over another takes his place.

“Every minute counts,” Mark Nelson, a veteran rider, said as he waited for the rodeo to begin that evening. “Theoretically you want one bull rider to go, and the next one’s ready to go.”

Nelson wasn’t riding that night. But he and a team of handlers — uniformed in faded jeans, boots and cowboy hats — stood by on the platform from which riders mount their bulls, prepared to coordinate the unifying of the two.

Backstage, Bodie Wilson prodded the animals through the chutes, funneling them toward a series of narrow stalls, just large enough for their bulky masses. To one side of each stall a gate opened into the arena, now filled with the glow of floodlights and surrounded by full stadium seats.

A young man in colorful fringe chaps and a single leather glove walked to the edge of the platform, straddled the fence and climbed onto his bull.

That moment is crucial — so much can go wrong. No doubt rodeo riders are tough, but they are still fragile sacks of flesh and bone atop 1,500-pound animals, surrounded on all sides by merciless metal.

It takes as much grit to mount a bull as to ride it, and arguably the first step comes with as great a risk, out of sight of spectators. Bulls have been known to flop over in the chutes, and if they land on their rider, a broken back or an injured head is a fortunate outcome.

“The chutes are the most dangerous places in the arena,” Bodie said. “There’s less things to hurt you out there than in the chutes.”

That’s what the handlers were there for: to steady the rider and his bull while the young man made his final preparations.

Once settled in the saddle he smeared a glob of tree sap called rosin on his glove and rubbed it fast up and down the braided bull rope, heating the sticky substance. That keeps his one-handed grip firm, but again timing is essential — rosin doesn’t stay hot long.

He wrapped the rope in his gloved hand, clutching it with all his strength, and with his bare hand grabbed a metal rung. Head down, a moment of focus, a few breaths. The gate flew open.

“Heeya!” came the shout, and the rodeo crew watched from backstage as the cowboy clung to a fiery, flailing bull, a crowd cheering him on.  

Animals used in rodeo are subjected to abusive conditions in order to guarantee they’ll perform as expected by the paying public. Without the use of spurs, tail-twisting, and bucking straps cinched around their abdomens and groins, these frightened and often docile animals typically wouldn’t even buck. The rodeo experience for animals consists of electric prods, twisted necks, and being violently slammed into the ground. “Retirement” is a one way trip to the slaughterhouse.

PROPOSED COMPROMISE: Back in 2006, after a series of animal injuries at the annual rodeo in Cloverdale, B.C. (just outside Vancouver), the Rodeo Committee (encouraged by the City Council and the Vancouver Humane Society) dropped four problematic events from the rodeo program: calf roping, team roping, steer wrestling and the non-sanctioned (and sexist) "wild cow milking contest." This left on bull riding, saddlebronc and bareback riding, plus the women's barrel racing event. PROGRESS! The rodeo lost its CPRCA sanctioning, of course, but not to worry. The prize monies are so good that the major rodeo cowboys still come to compete, the crowds are bigger than ever, and the animal rights protests have mostly disappeared. EVERYBODY WINS. Cloverdale can now claim title to the continent's most humane rodeo. Others should follow suit.

"Animals are just like humans"? If that were true, rodeos would be outlawed. (And just for the record, humans are animals, too.) Consider these two quotes from a couple of Wyoming folks:

"Women should not rodeo any more than menn can have babies. Womenn were put on earth to reproduce, and are close to animals. Women's liberation is on an equal to gay liberation--they are both ridiculous." (--a Wyoming steer wrestler, in the book, "RODEO: An Anthropologist Looks at the Wild and the Tame," by Elizabeth Atwood Lawrence, Univ. Tennessee Press, 1982), and this:

"If it gets to the point where people think rodeo is inhumane or cruel, they quit coming, and then we're out of business." (--Tom Hirsig, CEO, Cgheyenne Frontier Days Rodeo, 7/27/18 Wyoming Tribune Eagle)

Be aware that nearly EVERY animal welfare organization in the country (Canada, too) opposes rodeo due to its inherent cruelty.. Most rodeos don't even provide on-site vets to care for injured animals. The PRCA has done so only since 1995, after FIVE animals were killed at the California Rodeo/Salinas.