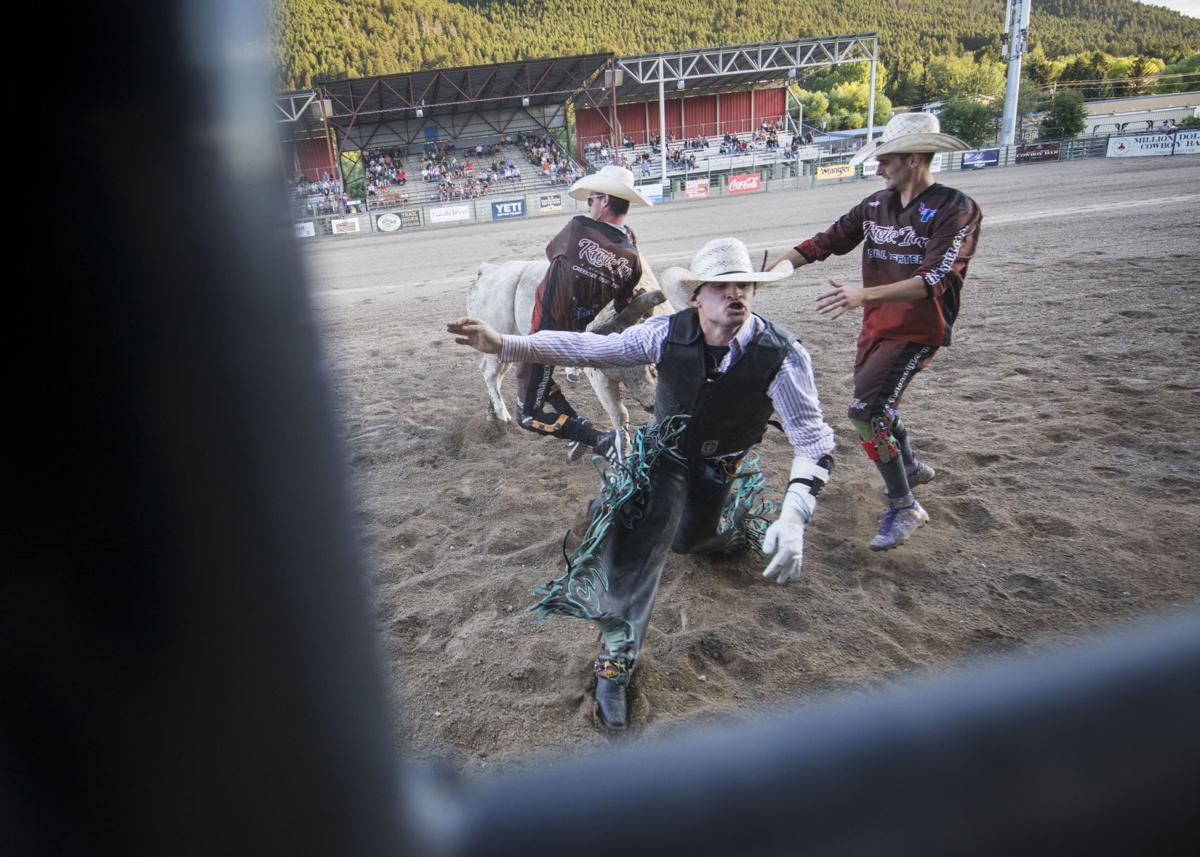 The bull fighters work to corral the bull as Ty Bertrand runs toward the gates after falling off while competing in bull riding last July during the Jackson Hole Rodeo. Bertrand rode the bull Mama’s Boy. 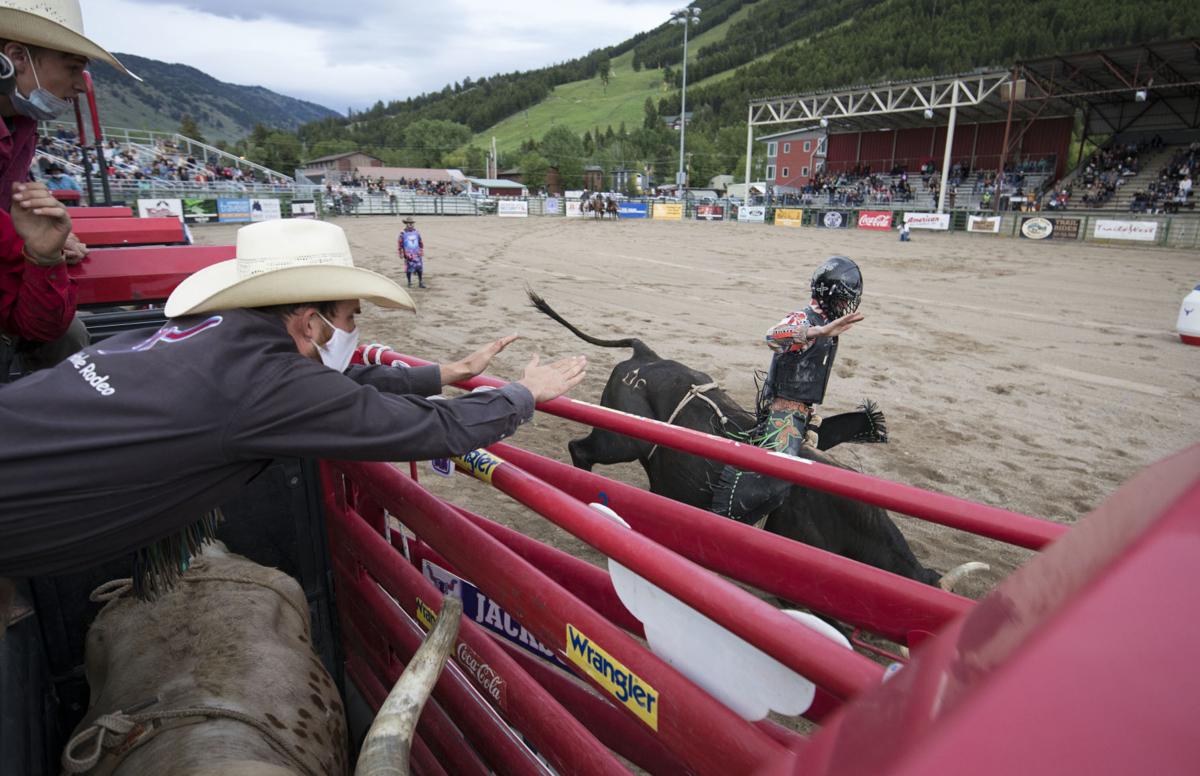 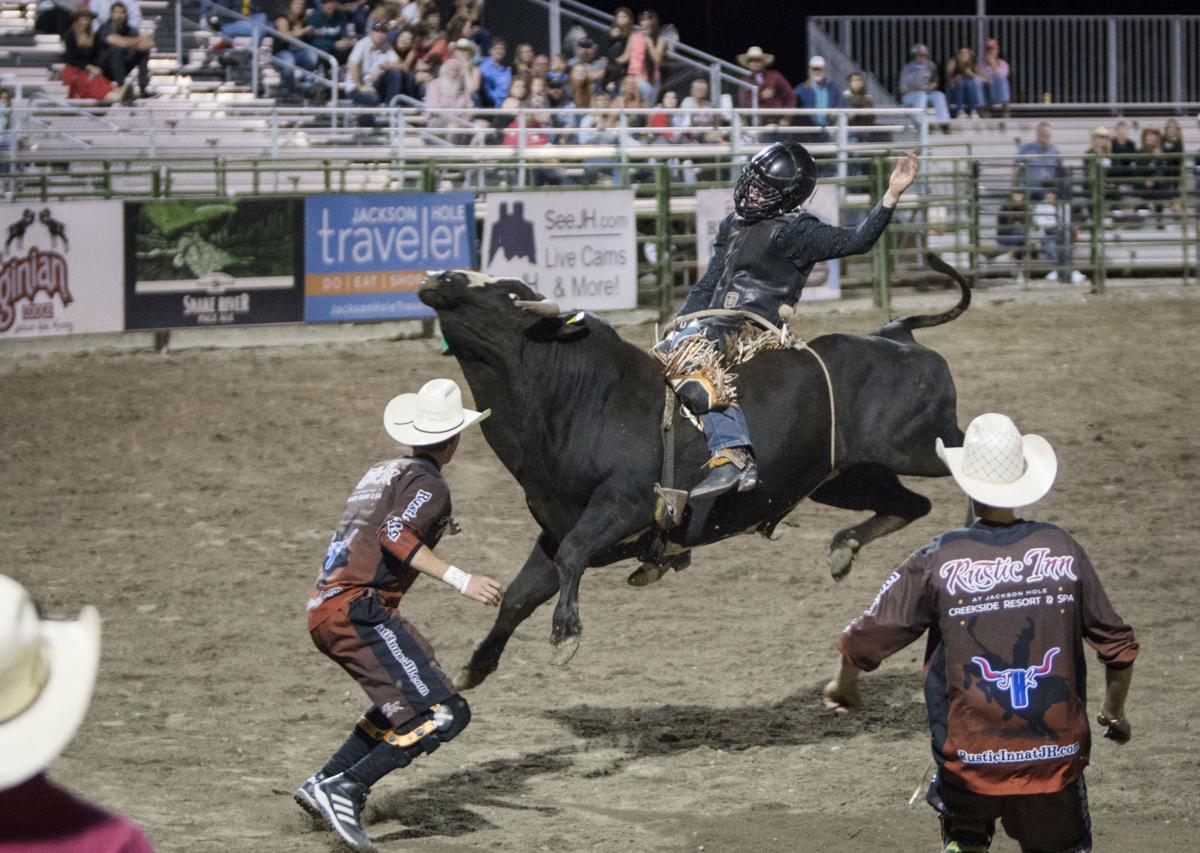 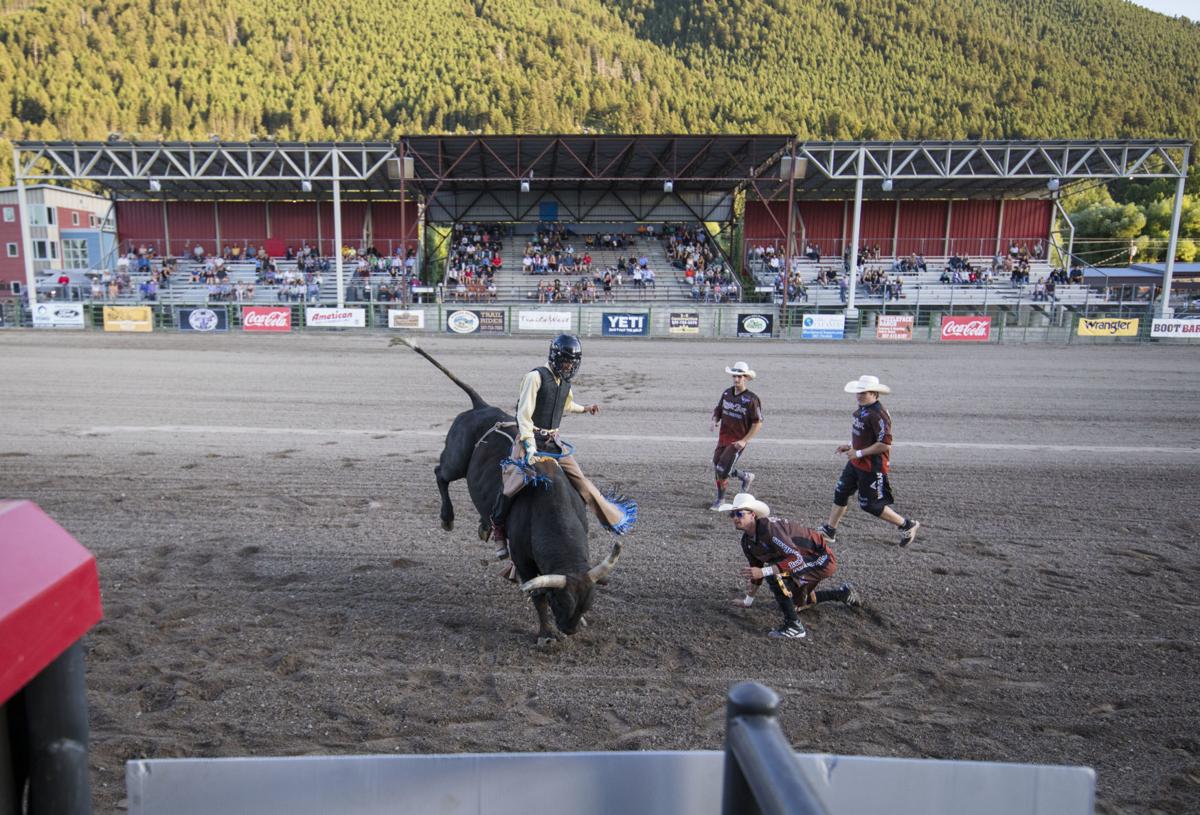 Jaspur Brower takes his turn in the arena atop 208 Illuminati. 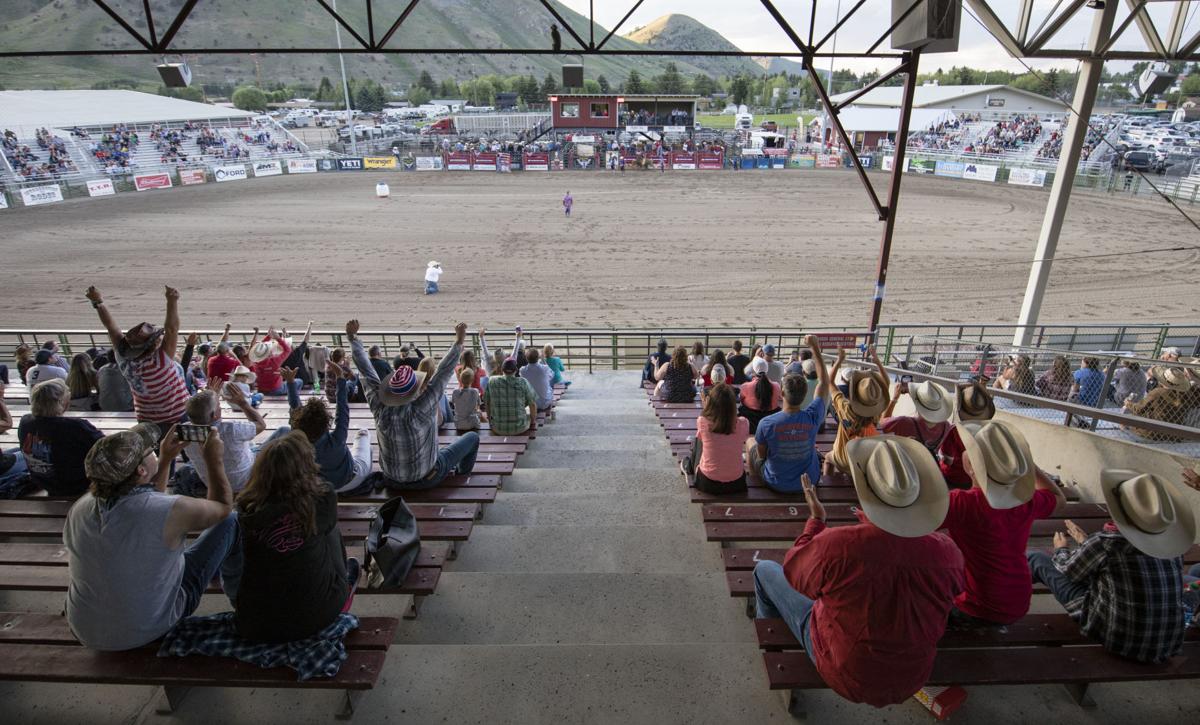 Buskin Wilson, right, tapes up the wrist of his eldest son, Tucker Wilson, before Tucker competes in bull riding during Jackson Hole Rodeo in 2019.

The bull fighters work to corral the bull as Ty Bertrand runs toward the gates after falling off while competing in bull riding last July during the Jackson Hole Rodeo. Bertrand rode the bull Mama’s Boy.

Jaspur Brower takes his turn in the arena atop 208 Illuminati.

Buskin Wilson won’t even consider most bulls until he’s seen them buck at least four or five rounds. Like a football coach recruiting athletes, the former professional bull rider scours Facebook pages and YouTube highlight reels, watching for performances he knows will sell at the Jackson Hole Rodeo.

“I’m looking for a bull that bucks really hard and is really showing that it’s pacy,” Wilson said.

He pronounces it pack-ey, and the meaning is essentially that it packs a punch, but in a controlled way. Wilson wants a bull that’s passionate while still rideable, one that will put on the best possible eight-second show, then toss its rider in spectacular fashion.

Some bull owners will put “cowboys love me” in the description, a key tip for Wilson that they’ll put on a show. But he does have to travel all over the country to find them.

In May he road-tripped up to Montana to pick up a white-speckled muley named Floyd, and he’s currently planning a trip to Michigan. Texas has lots of options, but the bidding there can be fierce.

This year he has a budget of just $60,000 for new bulls, which he’ll have to stretch to bring in his goal of 17 newbies. Like timber and chicken wings, the price of competitive animals has skyrocketed during the pandemic, making it difficult for Wilson to recruit the caliber of talent he’s used to. At each auction he’s battling half a dozen contractors for the same animal: “You’re just crossing your fingers hoping that it works out.”

The stakes are high for each purchase, Wilson said, because there’s always the chance an animal could get sick or turn lazy when it arrives at the fairgrounds, jeopardizing the success of summer shows. Wilson has to trust his gut, formed by years of experience riding and recruiting, to pull the trigger. He knows failure to attract high-caliber rides means the riders won’t show up.

In order for the cowboys to come back, “you have to pay the money to play.”

Those new recruits will join a crew of returning favorites like Whiskey River, Trick Daddy and Otis, who earned his name by trampling Buskin’s cousin. Fans shouldn’t expect to see them all on the same night, because they try to buck each bull only once a week to keep them spirited.

If they take too many runs in the same arena, Wilson said, they’re likely to get bored.

“You got to change it up with them,” he said. “You gotta change the delivery. And they have to get a cowboy on the ground.”

When the riders are too sticky, the bulls lose confidence and Wilson said they’ll just stop and quit. He imagines the bull’s mindset is “It ain’t working, everything I’ve done, I can’t get a cowboy on the ground.”

To fire them up again, Wilson will take the bulls around to the practice pen and give them a smaller, younger rider who they can easily buck off.

“He needs the victory,” Wilson said, “to have confidence to keep going.”

The bulls raised in this circuit have been born and bred for the bucking ground. When they turn a year old they have a remote-controlled 20-pound dummy tossed on their back. By three they’ll meet a real rider, then start traveling for competitions. Wilson likes to pick them up around age five, allowing ample time to notice patterns like aggression and excitability.

But even with that preparation the actual sale can feel like buying a used car — he’s never sure if the animal’s health and habits are as its owner says, and you can only tell so much from the tape: “Sometimes you don’t get the honest truth.”

Once wrestled back to the Jackson fairgrounds, the bulls don’t always get along with their new mates.

“I don’t know what it is with our place, but we’re bringing new stock in all the time until there’s always a pecking order,” Wilson said. “That part stinks because one of them’s gonna get woofed really bad … once they smell blood they all get hot with it. It’s crazy.”

In this season, before the summer’s bucking begins, the bulls get some time off to hang out and eat. Floyd, who Wilson said is “gonna be one fun one for the guys to get on,” already weighs at least 1,700 pounds and will get a new feast of grain and hay to munch on.

Soon enough they’ll start running the bulls around to get them back in shape, and form a more personalized diet for each bull. The “easy keepers,” for example, “can look at grass without eating it and gain weight,” whereas other bulls will need every morsel to bulk up.

Unlike the pros, there’s no swimming pool training at the Wilson farm, and Buskin jokes that because the bulls are fighting each other so much, they get more than enough exercise. Perhaps that’s the Jackson Hole secret.

Each of Phil Wilson’s three sons take on a different aspect of the rodeo — horses, ropes, and, in Buskin’s case, bulls — mirroring their lifelong passions. And for Buskin it’s hard to imagine a place he’d rather be.

“[We] work hard at getting the best bulls we can for those guys that come out,” he said, “and they love it.”

He’s also pumped that the pandemic is on its way out, opening the door for full-on fairground revelry again.

“We’re back on the right path now. And I think we’re all moving ahead. We’re ready. We’re ready to be rolling.”  

“Once they smell blood they get all hot with it. It’s crazy.” — Buskin Wilson on bulls meeting bulls