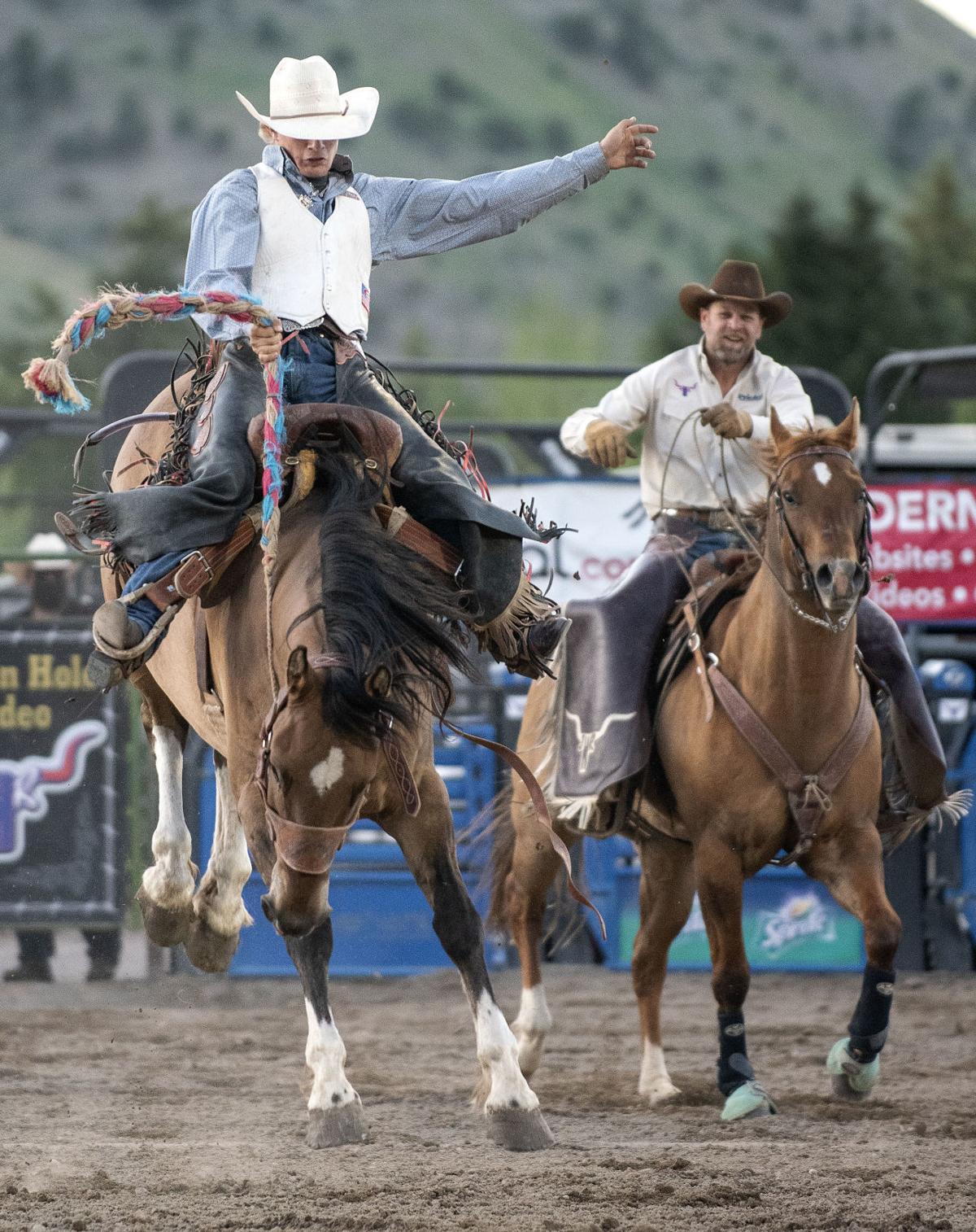 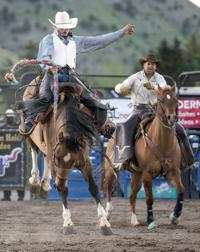 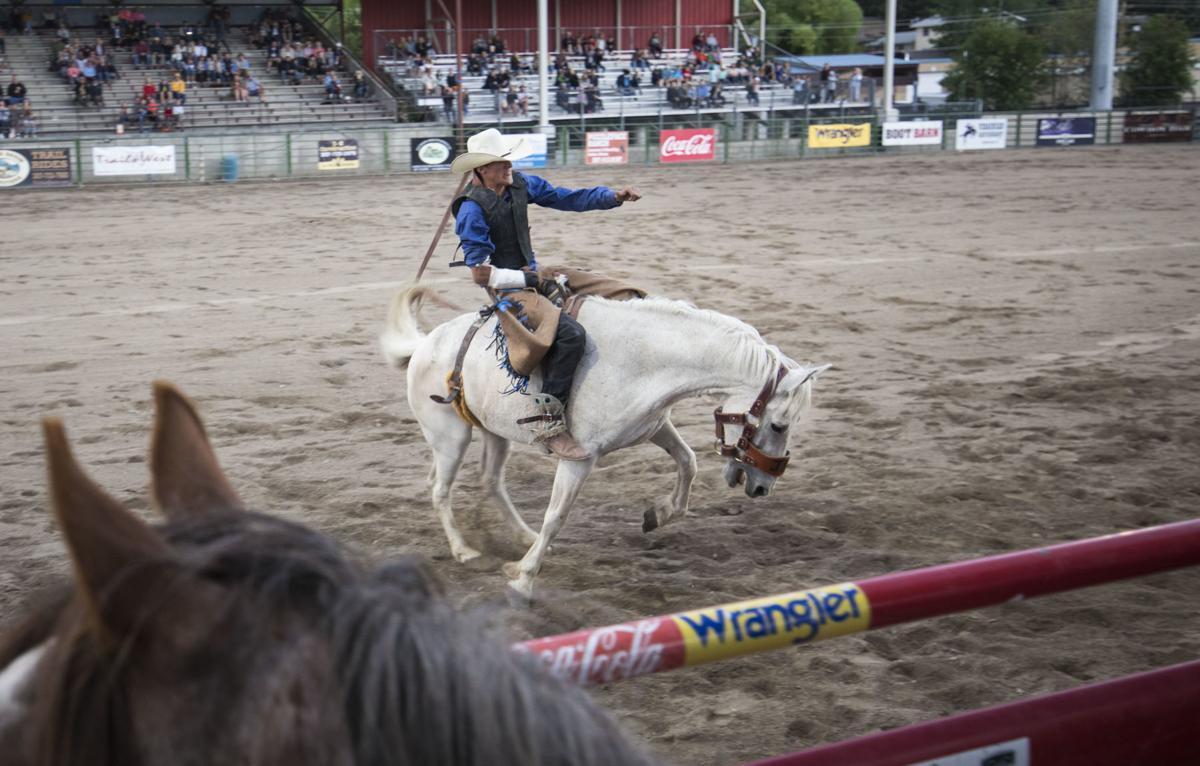 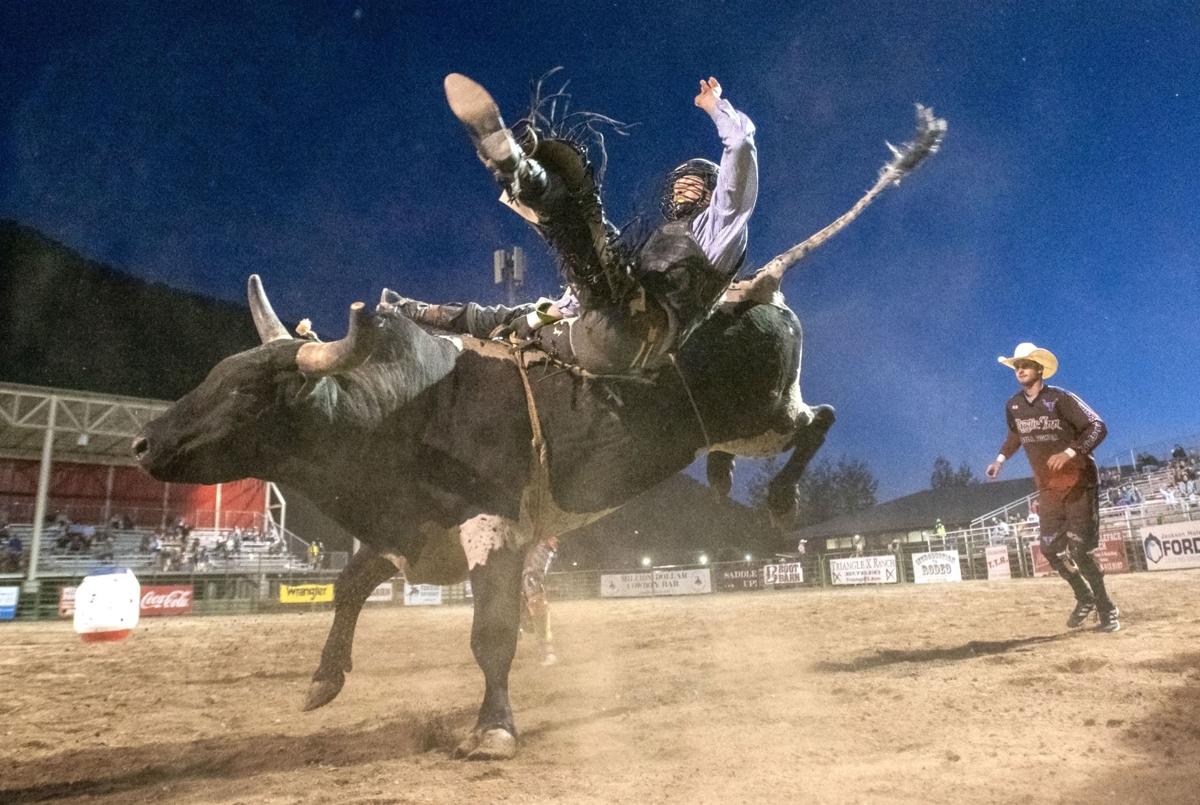 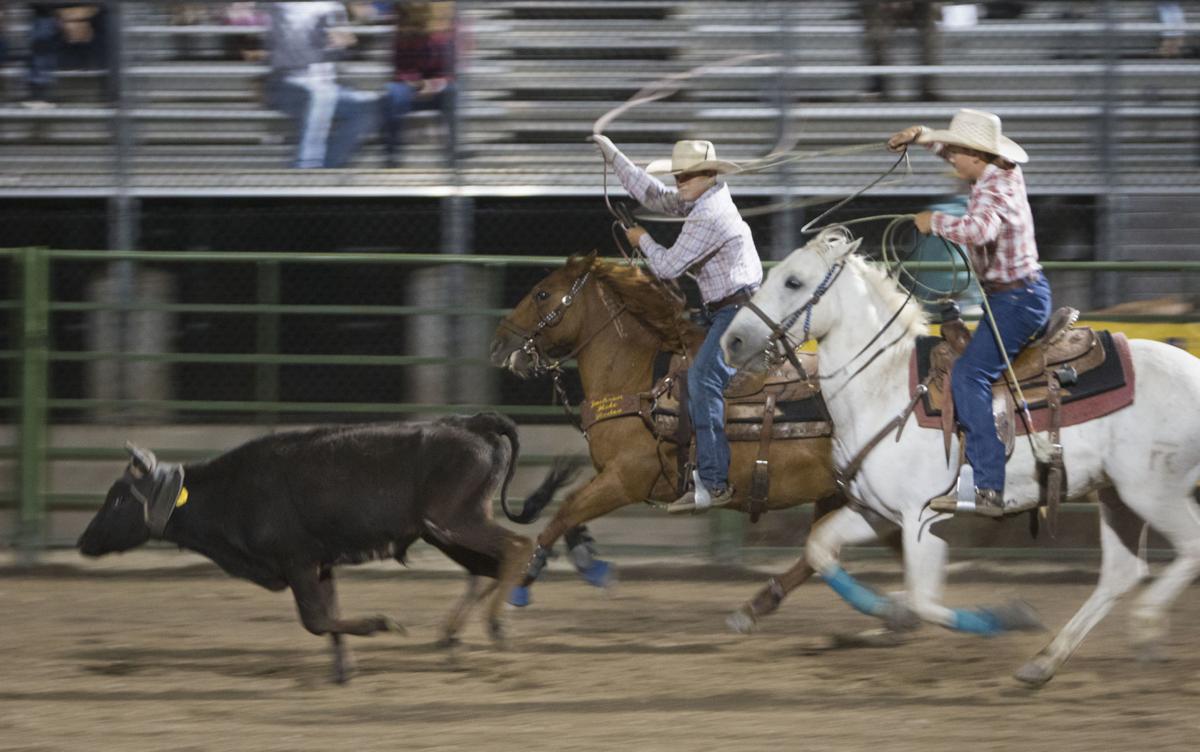 Ryder Kerr and Case Kerr compete in the first section of team roping during the final night of the Jackson Hole Rodeo at the Teton County Fairgrounds last year. 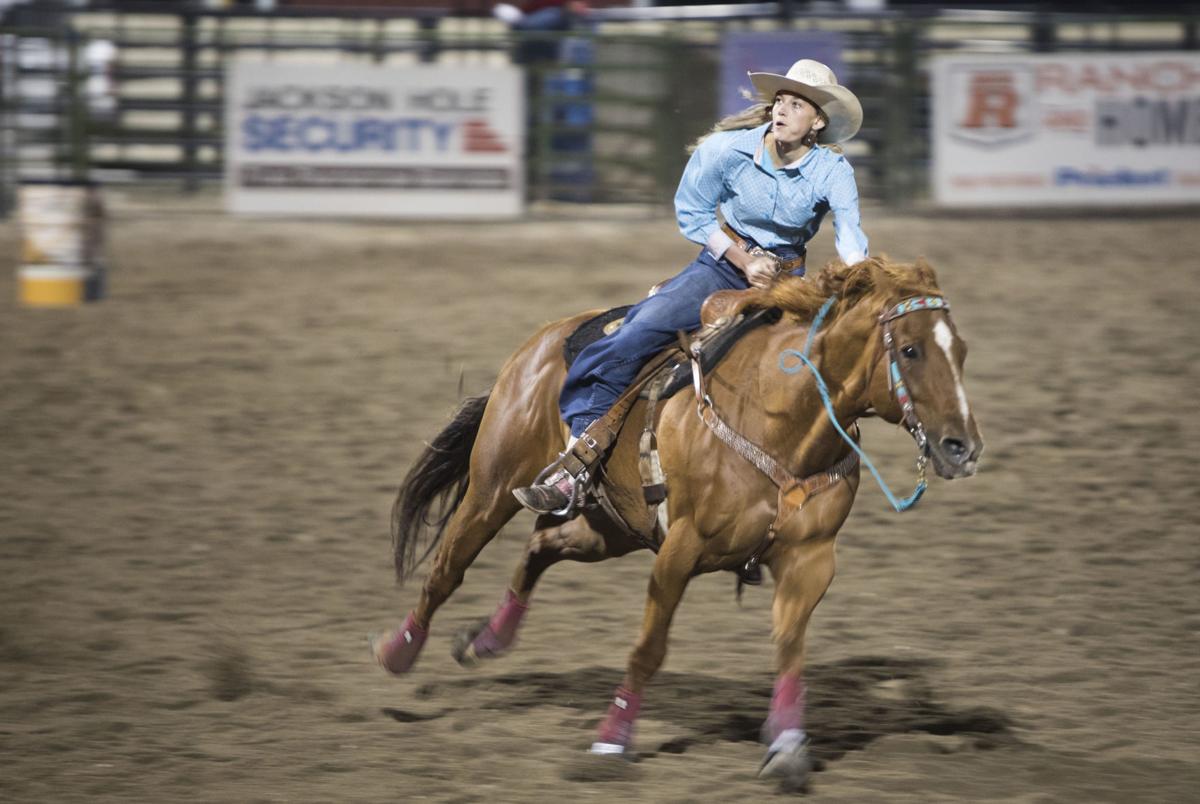 Savana Wackerman, riding Phoenix, glances at the clock last year while competing in barrel racing at the Jackson Hole Rodeo. 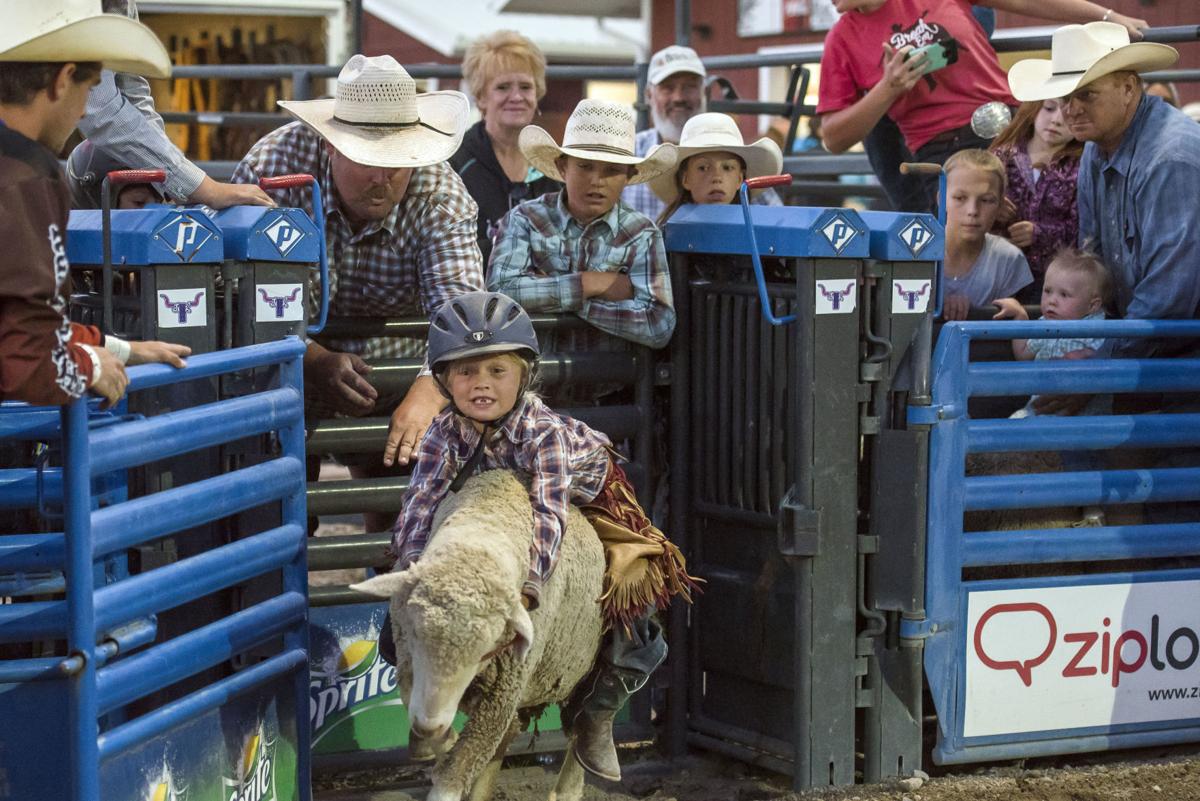 Ariat Kerr busts out of the chutes in 2019 at the Jackson Hole Rodeo at Teton County Fairgrounds. 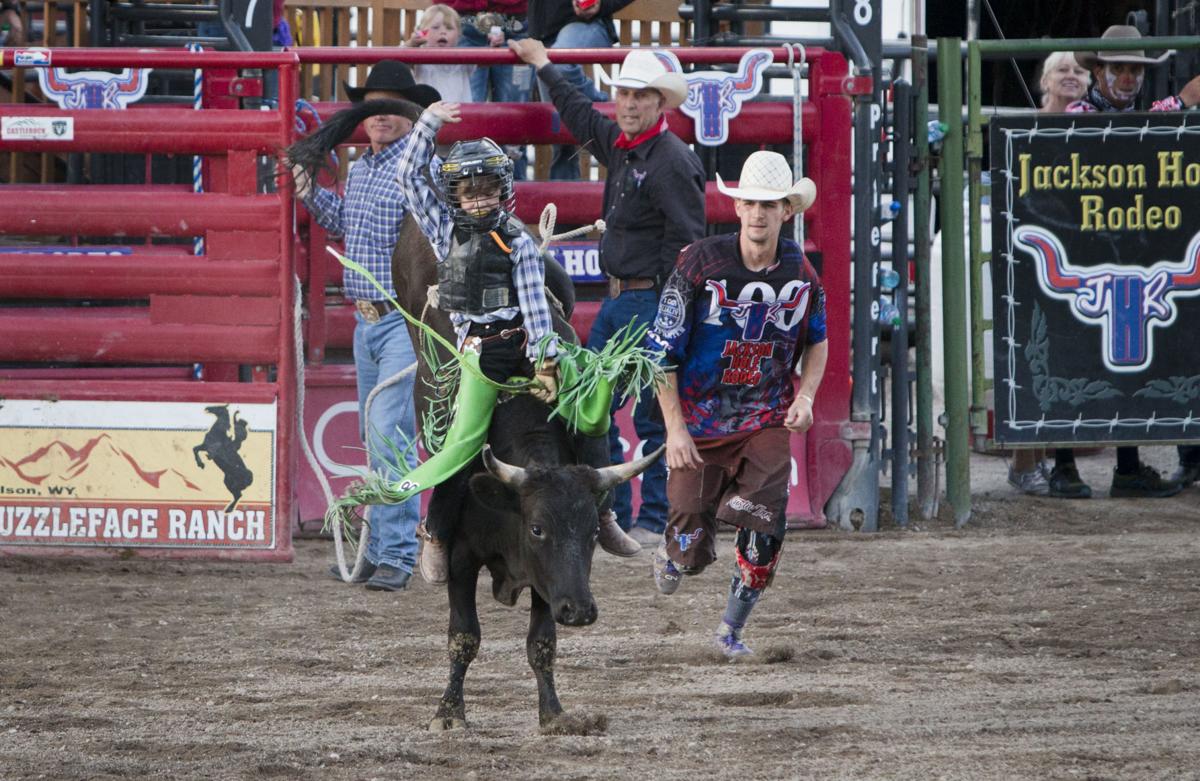 Callaway Wilson rides the mini bull Im in Debt during the competition last Fourth of July.

Ryder Kerr and Case Kerr compete in the first section of team roping during the final night of the Jackson Hole Rodeo at the Teton County Fairgrounds last year.

Savana Wackerman, riding Phoenix, glances at the clock last year while competing in barrel racing at the Jackson Hole Rodeo.

Ariat Kerr busts out of the chutes in 2019 at the Jackson Hole Rodeo at Teton County Fairgrounds.

Callaway Wilson rides the mini bull Im in Debt during the competition last Fourth of July.

So, you’re ready for the rodeo.

You bought a pair of cowboy boots. You went to Pendleton and nabbed a pearl-snap. You got a Stetson or a felt full-brim hat. Maybe you even wiggled into a pair of Wranglers.

You can walk into the stands of the Teton County rodeo arena, and no one’s going to look at you sideways as you take your seat and sip your Coors: You look the part. But for all your good looks, when the action starts you’re completely lost. The rodeo is like some alien sport.

Have no fear, with this trusty guide you can follow the action without looking lost. Keep this in your pocket, or study it in your hotel room before you head to the fairgrounds. That way, when people are raving about their favorite saddle bronc rider at the Million Dollar Cowboy Bar later tonight, you’ll be able to join in the conversation.

In rodeo’s classic event, riders start with their heels above the point of the horse’s shoulders as it makes its first move out of the chute, which is called “marking out the horse.” With one hand gripping a rope attached to the horse’s halter, the rider must stay securely seated for eight seconds. But it’s not simply a matter of hanging on.

According to the Professional Rodeo Cowboys Association, riders often call saddle bronc riding the hardest rodeo event, because they must have style and grace, mirroring their movements to the horse’s bucking for a fluid ride. That free hand, usually cast upward like that of a congregant in a revival tent, cannot touch the rider’s body or the horse at any time in the eight seconds. After marking out the horse as it leaves the chute, the rider must spur in a pendulum motion, going from the point of the shoulders to the back of the saddle.

How to win: First, stay on the whole time. Second, look better than everyone else, meaning a fluid ride synchronized with the horse, with control of the horse’s bucking motion. Riders are scored out of 100 points, with 50% coming from the rider and 50% from the horse.

The Professional Rodeo Cowboys Association spares nothing when describing this event, in which riders sit astride a horse with little more than a leather strap attached around its withers, the spot between the shoulder blades. As in saddle bronc riding, when the horse leaves the chute the rider must “mark out” the horse or face disqualification. As the horse bucks, a rider must employ a pendulum-swing spurring motion, with the spurs curled back from the horse’s shoulders on the buck and out over the shoulders on the descent. Don’t touch the animal or yourself with the free hand: That disqualifies a rider.

How to win: It’s quite similar to saddle bronc riding. Stay on for eight seconds. Spur correctly. Judges score the rider based on the spurring, and they score the animal based on how hard it tries to buck its rider, if it changes direction and if it fully extends its legs while it bucks.

Riders are not required to mark out their animals as they leave the chute, probably because staying on for eight seconds is a feat in and of itself. Spurring is also not required, again, because they’re simply holding on for dear life.

The unpredictability of the bull’s movements makes this one of the most exciting, and dangerous, events at the rodeo. Bulls dart side to side, buck back and forth and sometimes spin in circles — think Muhammad Ali’s footwork and Shaquille O’Neal’s body.

Professional Bull Riders will be in Jackson midsummer. Turn to page 23 for information.

How to win: Hold on. Any rider that actually makes it eight seconds stands a good chance of winning, but judges also give credence to those who can employ spurring techniques or look good while they hang on.

The synchronized swimming of rodeo, team roping requires a pair of horse riders to precisely wrangle a racing steer. The riders start on either side of the chute, and the quarry is given a head start across the arena. The header breaks first after the steer reaches its “advantage point.” The heeler follows.

The point of the event is in the title: team roping. The header ropes first, aiming for the horns and head, and, once the steer is caught, swings it to the left so that the heeler can attempt to catch both hind legs in his lariat. The header has only three legal catches: around the horns, around one horn or around the neck; catch anything else and the team is disqualified.

The clock stops when both riders have roped the steer, their lines are taut and their horses are facing one another.

How to win: Do it the fastest. This is a timed event, not a scored one, so the basic premise is to be the fastest team. However, teams can be assessed penalties for a couple of things. If the header breaks before the steer reaches the advantage point, that’s a 10-second penalty, and if the heeler manages to wrap only one hind leg, that’s a five-second penalty.

As with most rodeo events, the name is fairly descriptive of what the competition looks like: Three barrels are set in a triangular pattern in the arena, and the horse and rider start outside the racing area. The timer starts when they pass the starting line.

Originally a sport for the ladies, who were judged less on speed and more on horsemanship, outfit and style while the men took part in the roping and bull and bronc riding events, today’s barrel racing is for riders of all sorts — men, women and kids, according to the International Barrel Racers Association.

Have more questions about this fast-paced event? Turn to page 8.

How to win: Be the fastest. Contestants who knock over a barrel are given no time, though touching a barrel, even to keep it from falling, is allowed.

The entry for this event on ModernFarmer.com is titled “6 seconds and a sheep,” which pretty much tells you everything you need to know. Mutton bustin’ is like bronc riding, except the contestants are kids and they ride fluffy sheep rather than 1-ton death traps.

Helmeted, the kids basically hug the sheep’s neck and hang on as the woolly ungulate sprints as hard as it can around the arena. There are basically no other rules, no spurring or style points, no marking out the animal. Though it may seem cruel to stick a kid between the ages of 4 and 7 on an animal that can weigh close to 200 pounds and is intent on leaving its rider behind, the sport introduces children to the roughstock events that their parents or older siblings participate in.

How to win: It’s quite similar to bull riding: Just stay on for the six seconds. From there, if several kids manage to hang on and not slide off the animal’s side (which seems to be the way most fall off), it seems to be the judges’ discretion who wins.

Almost exactly like bull riding, except everything is smaller. Full-grown mini bulls are about 500 pounds (they’re the Lil’ Sebastian of the rodeo), and their pint-size riders are kids who haven’t grown up enough to fit on the back of a regular bull.

Riders are generally 14 or younger, and the sport is mostly made up of young men, though Najiah Knight, who was profiled in a Professional Bull Riders web story, is holding her own as the only girl on the professional mini bull riding circuit, at least as of February.