Blaine Mathews rides Roderick for a winning score of 85 during the 2019 Jackson Hole Rodeo. Mathews hails from Pinedale and spends his winters racing snowmobiles. 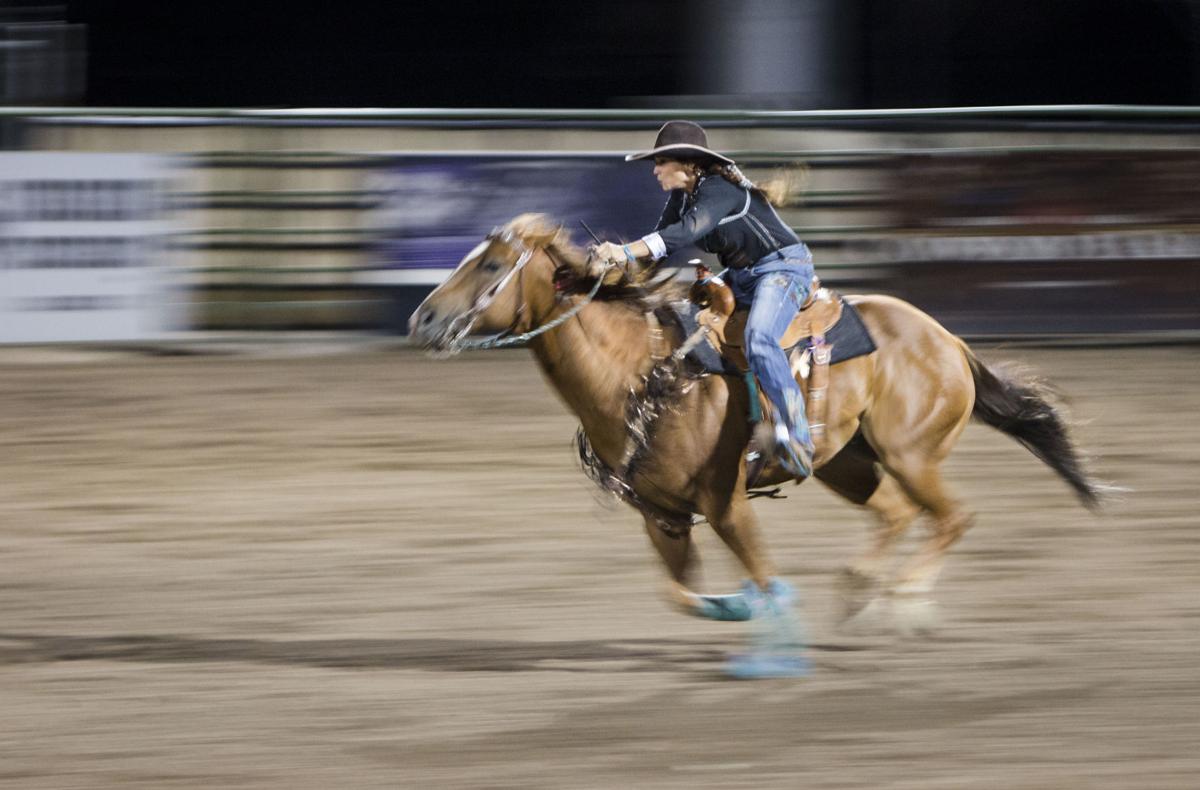 Blaine Mathews rides Roderick for a winning score of 85 during the 2019 Jackson Hole Rodeo. Mathews hails from Pinedale and spends his winters racing snowmobiles.

You’re tucked in under the roof of the grandstands, or maybe braving the elements in the adjacent bleachers. Maybe you grabbed a beer and a snack, maybe you’re wearing a cowboy hat yet to be broken in.

You’re taking in the Jackson Hole Rodeo the way just about everyone else has all these years, but this experience is a big departure from last year’s pandemic-tainted affair.

Putting on a rodeo in any year is no small task, but last year’s rodeo was a trial in grin-and-bear-it for the Wilson family who runs the show. A health order kept the attendance at the rodeo uncharacteristically low, though the seats offered on any given night were usually sold out well ahead of the national anthem. Just the fact that Jackson was able to have its rodeo was a blessing, not just for the Wilsons and not just for the droves of tourists who take in the experience. It was also a blessing for the competitors — far and wide — as the usual nonstop river of bulls and bucking horses had all but dried up.

“That’s one thing where we’re blessed,” rodeo operator Phil Wilson said last year. “A lot of cowboys out there are looking for a place to rodeo, so we’re hoping [to get them] but we just don’t know yet. … We really want to take care of everyone so we can try to work out the logistics.”

Now, Blaine Mathews is no stranger to the Jackson Hole Rodeo. He hails from right down the road in Pinedale, and after spending winters racing snowmobiles he returns to riding bucking horses and team roping. Just the fact that the Jackson Hole Rodeo remained a consistent show in town in the 2020 summer was enough for him, and you’d see him vying for the top spot in saddle bronc.

In mid-June last year he got on his first horse since September 2019. Injuries, life and the pandemic had kept him away from the sport for some time, but he returned that June night and was bucked off. He was not planning to hit the road during that summer, so Jackson Hole Rodeo would be his home for the next few months, a familiar dirt each time out.

And really, he wasn’t terribly disappointed that opening night, because he was just getting his footing back.

“It’s so cool to do it again, even with the restrictions,” he said. “Heck, at least we’re here to rodeo.”

Mathews continued to compete near the top all year. He wound up second in the year end saddle bronc points, $4,446.45 on bucking horses that summer.

Cowboys like Mathews were staples throughout the summer season last year, and while all the roughstock riders get accustomed to spending time together behind the chutes a few nights a week, sometimes they’re joined by a man just passing through.

Granbury, Texas’ Ricky Williams was one of those one-nighters last July, making the trip to Jackson after a stint at the Cody Night Rodeo.

The Cody rodeo was occupied by pros for the Cody Stampede, and Williams didn’t feel much like sitting around and waiting. He loaded up his gear and went farther west to get on a horse, as a cowboy often does.

“I always heard this was a pretty cool rodeo,” the slim cowboy said after his ride. “[Vader] kind of tricked me; he kept turning back. It kind of had me worried for a minute, but I just did what I needed to do: Don’t quit and keep hustling.”

Hansen spent time at the Jackson Hole Rodeo as a kid, learning the craft as a bull rider before heading off to college in Dillon, Montana. He was a multiple-time College National Finals Rodeo competitor there and spent his summers chasing pro money before returning to school.

Heading into last summer, Hansen hadn’t been chasing much. Instead he was back home, breaking colts for old friends.

“I’ve just been breaking colts, riding six, seven horses a day for folks back home,” he said in late June. “I hadn’t hit a rodeo since the whole COVID thing started.”

He was rusty that night, admittedly, and maybe his horse 44 Yardvark was, too.

“He was supposed to stack up a little more and he just wasn’t having it,” he said of the horse he drew. “He’s probably rusty, too, in some spots.”

Hansen did shake off that rust over many nights of the Jackson Hole Rodeo. In mid-September, Hansen won the title at the Ram National Circuit Finals Championship in Greeley, Colorado.

Away from the chutes, barrel racer JoAnn O’Neal and her then-13-year-old horse Sling Shot were the stars of their discipline in 2020. The pair racked up $1,396.58 over the course of the summer, good enough to take the title in 1D barrels.

But the clover pattern isn’t Sling Shot’s only job. At home he is tasked with gathering the bulls the O’Neal family raises for stock contracting.

O’Neal said in July her family was expecting to stock contract for the National High School Finals Rodeo in Nebraska that summer before it was forced to move to Oklahoma, well outside her range. That left Sling Shot the opportunity to win races. A lot of them.

“He’s going good. He’s sore. … But he just tries his heart out for me,” she said after winning in 17.387 seconds one Friday night.

The rest of the summer Sling Shot was loaded up with his bull brethren wherever the family was contracting. And when he wasn’t doing that, he was often found at the Jackson Hole Rodeo.