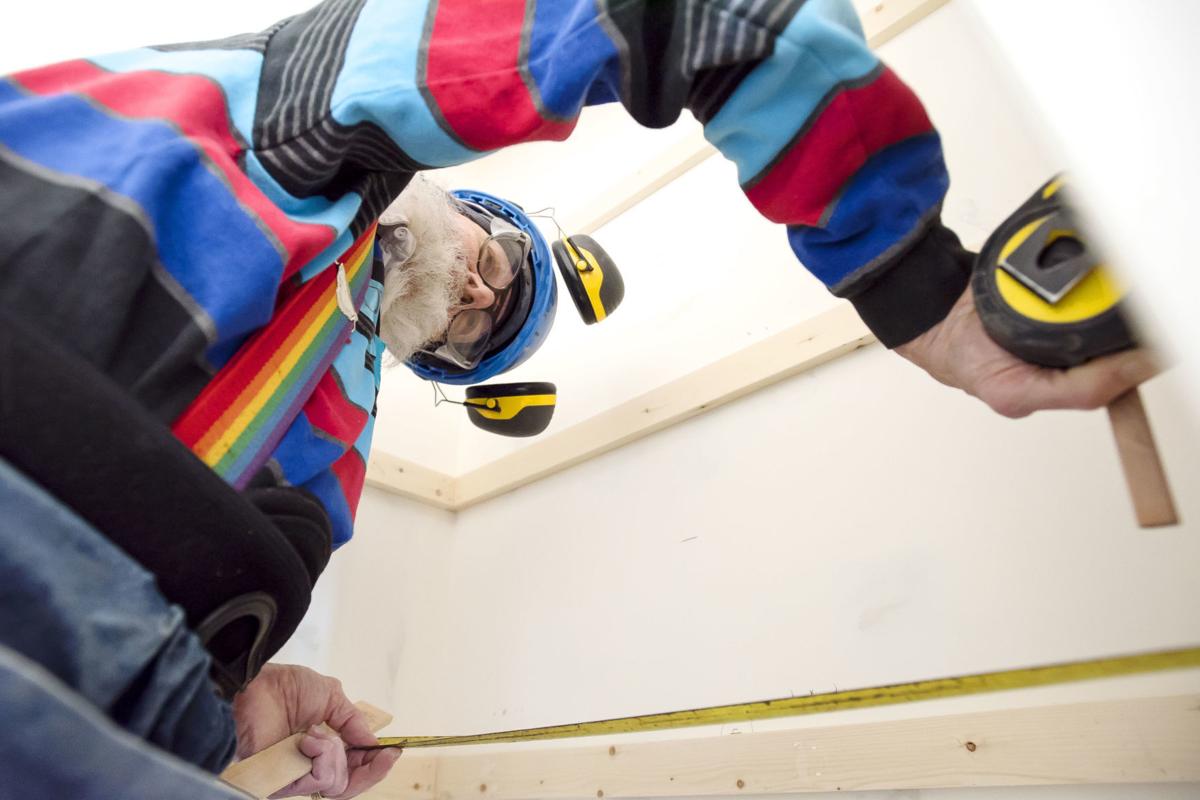 Volunteer John Harkness measures dimensions for closet shelves at the construction site of The Grove, the latest affordable housing project for Habitat for Humanity of the Greater Teton Area. Harkness took first place in the Winter Warriors Challenge in 2018. 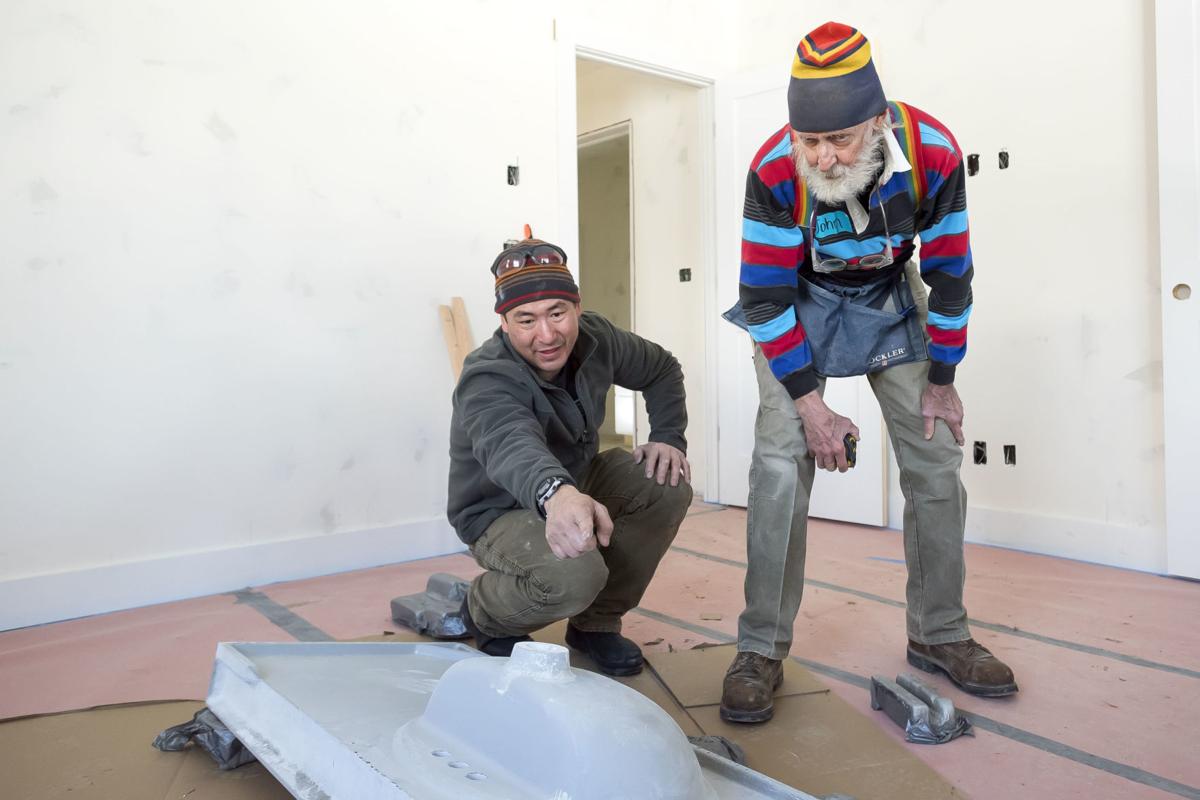 Future homeowner Chad Darnel, center, and Harkness, right, discuss strategies for mounting a bathroom sink. Harkness is a frontrunner in Habitat for Humanity’s Winter Warrior challenge. He made a weekly commitment to the project because “I need a day off from skiing,” he said. 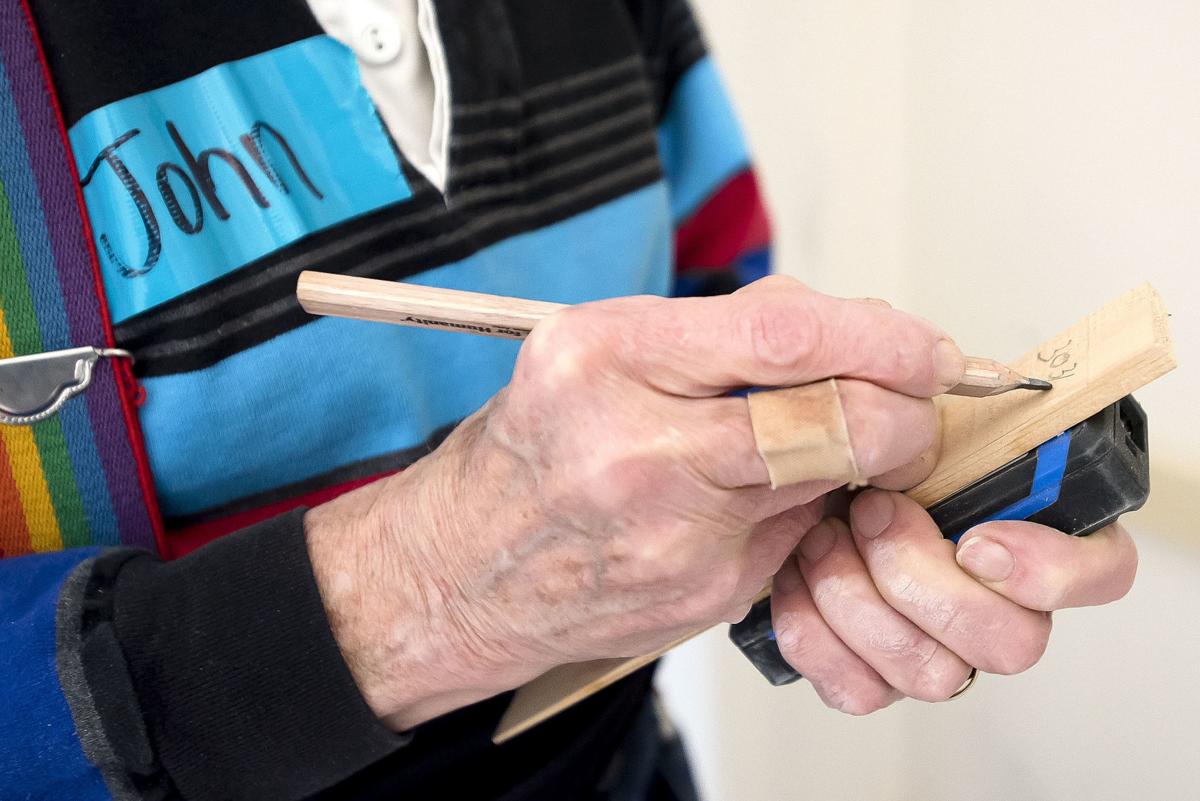 Volunteer John Harkness notes dimensions for closet shelves. As a cabinetry hobbyist he is well-qualified for the precision of interior finishing.

Volunteer John Harkness measures dimensions for closet shelves at the construction site of The Grove, the latest affordable housing project for Habitat for Humanity of the Greater Teton Area. Harkness took first place in the Winter Warriors Challenge in 2018.

Future homeowner Chad Darnel, center, and Harkness, right, discuss strategies for mounting a bathroom sink. Harkness is a frontrunner in Habitat for Humanity’s Winter Warrior challenge. He made a weekly commitment to the project because “I need a day off from skiing,” he said.

Volunteer John Harkness notes dimensions for closet shelves. As a cabinetry hobbyist he is well-qualified for the precision of interior finishing.

Billows of breath clouded the air before the bundled volunteers as they huddled to prep for a cold day’s labor.

They stood outside an unfinished apartment building at The Grove, six or so gloved and stocking-capped workers, walled in by plastic sheets hung to ward off the biting, 10-degree chill.

Katrina Belle, a construction supervisor with Habitat for Humanity of the Greater Teton Area, was overseeing the temporary help for the day.

“Does anyone want to work outside?” she asked.

Nervous smiles spread around the silent circle, so quiet you could almost hear the heaters running indoors.

The volunteers that early March morning were of two kinds: Some were future homeowners who will live in these units after giving at least 500 hours to construction. The rest were Winter Warriors — hardy, hopefully warm-blooded souls who endure the wintry elements so that others may sleep under an affordable roof.

Representing the latter group was John Harkness, 77, his dusty work pants held up by rainbow suspenders and his unruly white beard beaded with dew and glinting in the sun. A longtime Habitat volunteer, he shows up each Saturday, as another supervisor put it, “religiously.”

“I need a day off from skiing,” Harkness said.

In fact, the only time you won’t find him at the project site is the day of Jackson Hole Mountain Resort’s 100 Club breakfast.

Harkness is a frontrunner in the Winter Warriors competition, Habitat’s solution to a seasonal dearth of volunteers. Each hour of work earns a point, and those points mean prizes for whoever has the most when spring arrives.

Without help in January through March, Habitat Outreach Coordinator Elizabeth Ferguson said, the nonprofit sometimes struggles to meet spring deadlines. This year and last, rescue came in the form of the Winter Warriors.

“That’s what our volunteers are,” Ferguson said. “It takes a lot to leave your house and say you’re going to spend the day outside.”

And yet, many do. Between January and February, she said, volunteers racked up a whopping 1,200 hours. That includes large groups from community organizations like St. John’s Episcopal Church.

But then there are the solo diehards, like Harkness. That morning he wore on his hard hat the sticker from the trip he won last year to Montana’s Big Sky Resort.

When the group dispersed, some braved the frigid task of putting up siding. The rest took shelter in the tolerable temperatures of the apartment.

Harkness was one of the lucky ones, but for good reason. As a cabinetry hobbyist he is well-qualified for the precision of interior finishing, though at his first Habitat project, he said, “the manager actually thought it was a detriment.” He was too meticulous.

Perfectionism aside, Harkness’ love of construction and of helping people made him a perfect fit. He’s become a de facto foreman, so he took a group of volunteers and set to work.

“Es mejor,” he said with an encouraging grin when Nancy Sanchez brought back an uncooperative shelf for the second time.

He unclipped a measuring tape from his belt, checked the length and gave her new instructions: “Sixteen and 7/8ths.”

Sanchez moved to Jackson four years ago from the Mexican state of Michoacan, a few hours west of Mexico City. Soon, and sooner with the help of Winter Warriors, this unit will be hers.

Matt Hare — another shoo-in for the Winter Warriors competition who Ferguson wishes she could “clone and have like five of him” — said that’s exactly what motivates him to spend his free time on arctic community service.

“These homes are going to be life-changers for these people,” he said, “and they’re so deserving.”

Sanchez returned with the shelf and slid it into place, while another pair of volunteers installed the bathroom sink. All around her the place she will one day call her own was taking shape.

So they moved on to the next project, fitting trim around the doorways, and Harkness ran downstairs to grab the necessary tools. Just outside, a table saw buzzed in the subfreezing air.

As he climbed back up Harkness stopped midway, turned, and glanced around the unpainted room.

Underneath the cords of power tools and drywall dust and all other construction site debris it was easy to imagine it in finished form.

“There’s a real sense of accomplishment,” he said, then smiled contentedly and continued up.

A moment later the pounding of hammer on wood echoed through Sanchez’s home to be.

Habitat for Humanity of the Greater Teton Area is always looking for an extra set of hands, whether they've swung a hammer hundreds of times or never picked one up.

Volunteers can sign up as a team or individually to logs hours at The Grove. Shifts are available between 9 a.m. and 4:30 p.m. Wednesday, Thursday and Saturday. More info on volunteering at the build site can be found at TetonHabitat.org/get-involved/construction-site-volunteer.

Building things not your skillset? Volunteers are also needed in the ReStore, serving on committees and lending a hand on Habitat's international projects.