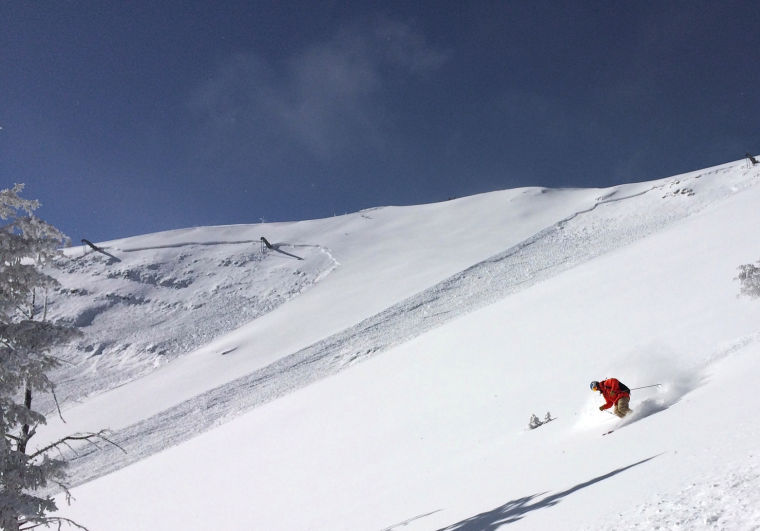 Glory Bowl has already produced several avalanches this month, as seen in this photo taken Dec. 10. 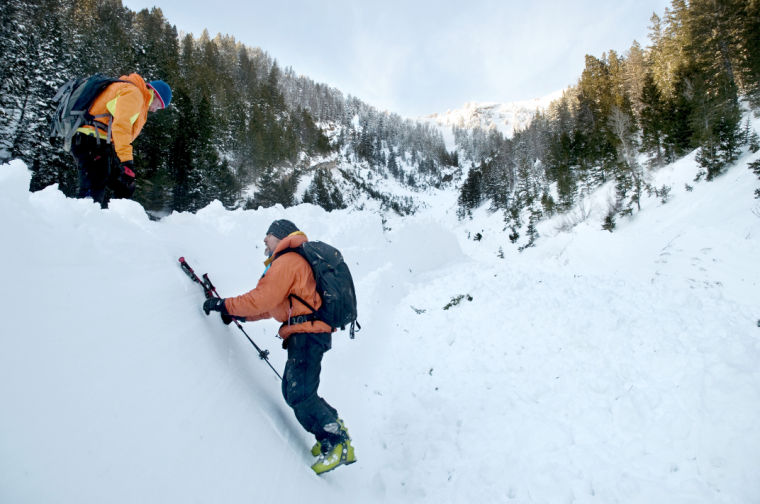 Teton Pass Ambassador Jay Pistono, right, examines avalanche debris at the bottom of a slide that triggered high on Taylor Mountain in January 2012.

Glory Bowl has already produced several avalanches this month, as seen in this photo taken Dec. 10.

Teton Pass Ambassador Jay Pistono, right, examines avalanche debris at the bottom of a slide that triggered high on Taylor Mountain in January 2012.

Five hundred and seventy-nine backcountry enthusiasts gathered Thursday at the Center for the Arts to hear experts talk about the avalanche conditions and give tips on how to stay safe in the backcountry.

Phil Leeds and Sava Malachowski “spent hours upon hours, days and months organizing tonight,” said Jackson meteorologist Jim Woodmencey, who served as the evening’s master of ceremonies, “and we could not be more thankful.”

The 21st annual event was again sponsored by Leeds’ store, Skinny Skis, in an effort to inform the community about avalanche dangers and how to deal with them.

“This is a formulated evening to provide essential information on avalanche terrain,” Leeds said. “It’s a unique event that we have had the pleasure of supporting for years.”

Teton County Search and Rescue and the Avalanche Hotline benefited from ticket sales and raffle proceeds.

Woodmencey charmed attendees as he spoke of his lifelong addiction to powder. He touched on subjects such as snowfall and weather patterns while informing the audience of the “No Nino” winter to come.

Keynote speaker Jim Springer of the Bridger-Teton Avalanche Center recollected fatal incidents he witnessed as a Mount Rainier climbing ranger. He discussed how many fatalities in the backcountry occur because skiers unthinkingly put themselves at risk.

Over the years skiers have accepted more and more risks as backcountry skiing has grown, he said.

The avalanche forecaster referred to what he called “Young Male Immortality Syndrome” — or YMIS — as the primary cause of death in the backcountry. Springer said too many skiers, especially men, push the envelope in the mountains. When skiers die in backcountry accidents, it’s often because they were in over their heads, he said.

Jordy Hendrikx, director of the Snow and Avalanche Lab at Montana State University, agreed with Springer. Hendrikx said dangerous problems in the backcountry are often caused by poor decision-making. He urged the audience to use the information they gathered Thursday to make safer decisions when they head into the hills.

Carpenter showed photos of north-facing slopes around Jackson and pointed out weak layers in the snowpack that have been around since as early as September.

Rheam gave a tutorial on how to decipher the charts and graphs found at JHAvalanche.org.

“There is no next-best place to the pass,” Pistono said.

Pistono focused on pass etiquette, highlighting problems he has seen in the past with parking, hitchhiking and ski safety.

Pistono urged skiers who use the pass to be calm and to communicate with other skiers. He said everyone can enjoy the special terrain along the Wyoming and Idaho border if they remain patient and work with each other.

“I’m gonna deputize everyone here to spread this information about the pass,” he said.

Pistono reminded attendees that not all the terrain skiers use on the pass is public land. He said that if skiers want to continue to enjoy the pass, they must be safe and orderly.

Speakers throughout the night enthralled guests with tales and warnings from the high country. Sponsors tossed T-shirts into the crowd between presentations, while Woodmencey and Leeds announced winners of the night’s many raffles.

“What a great opportunity to learn about backcountry safety,” Leeds said. “To be able to raise money for Search and Rescue and the Avalanche Hotline makes it that much better.”