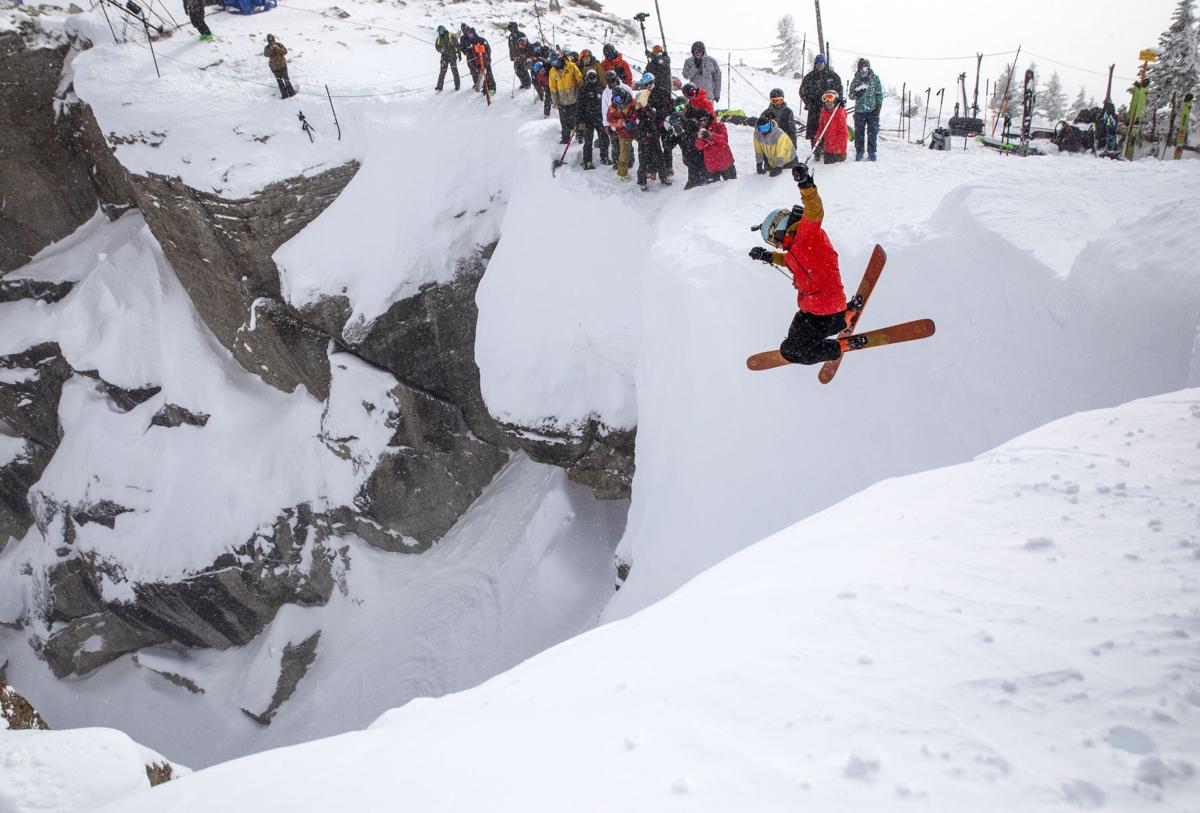 Caite Zeliff, the 2019 and 2020 Queen of Corbet’s Couloir, airs off the top of the iconic chute to launch her second run during the 2020 Kings and Queens of Corbet’s competition at Jackson Hole Mountain Resort. 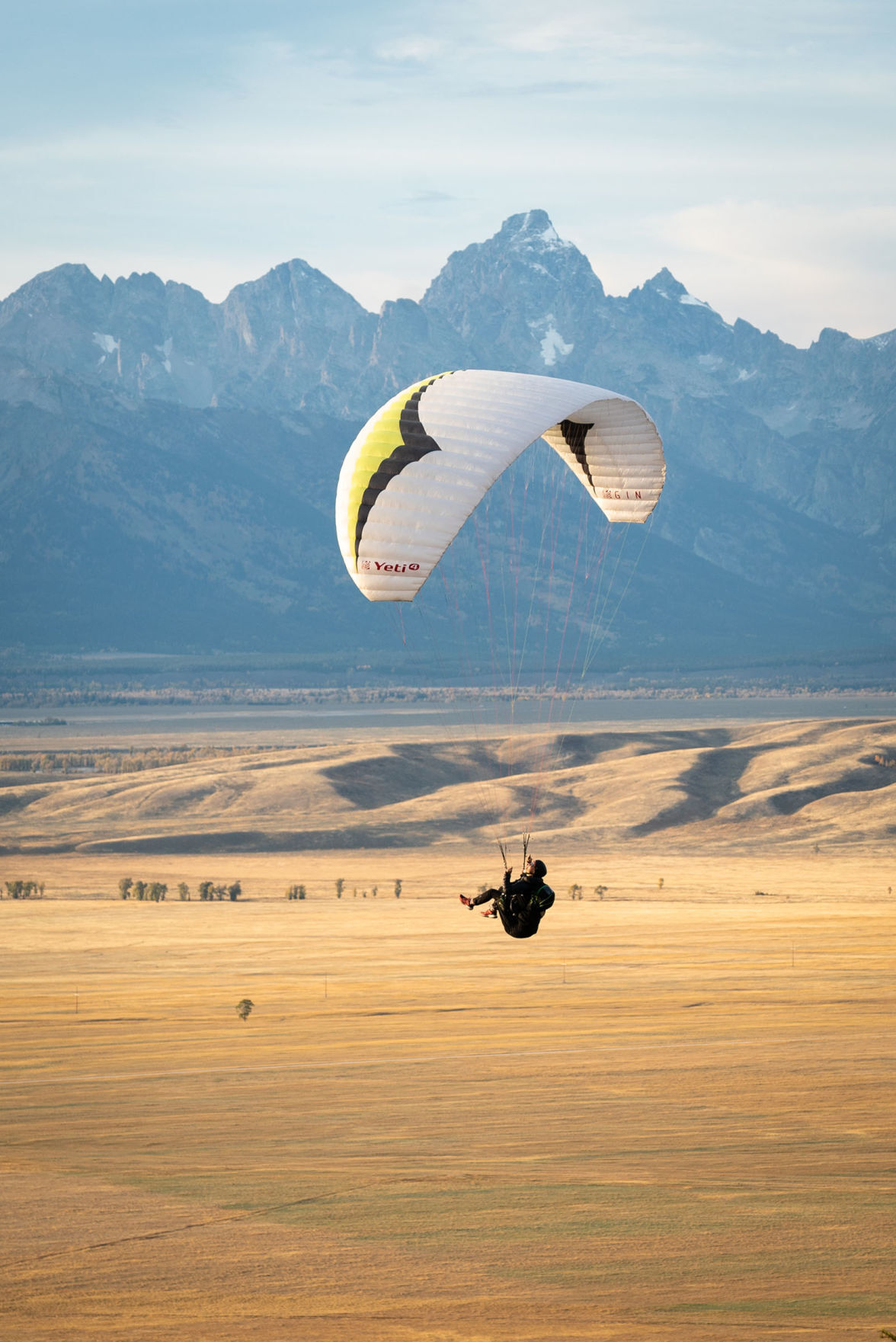 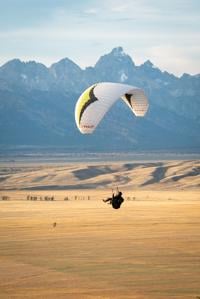 Caite Zeliff gets airborne last fall on the east side of the valley. 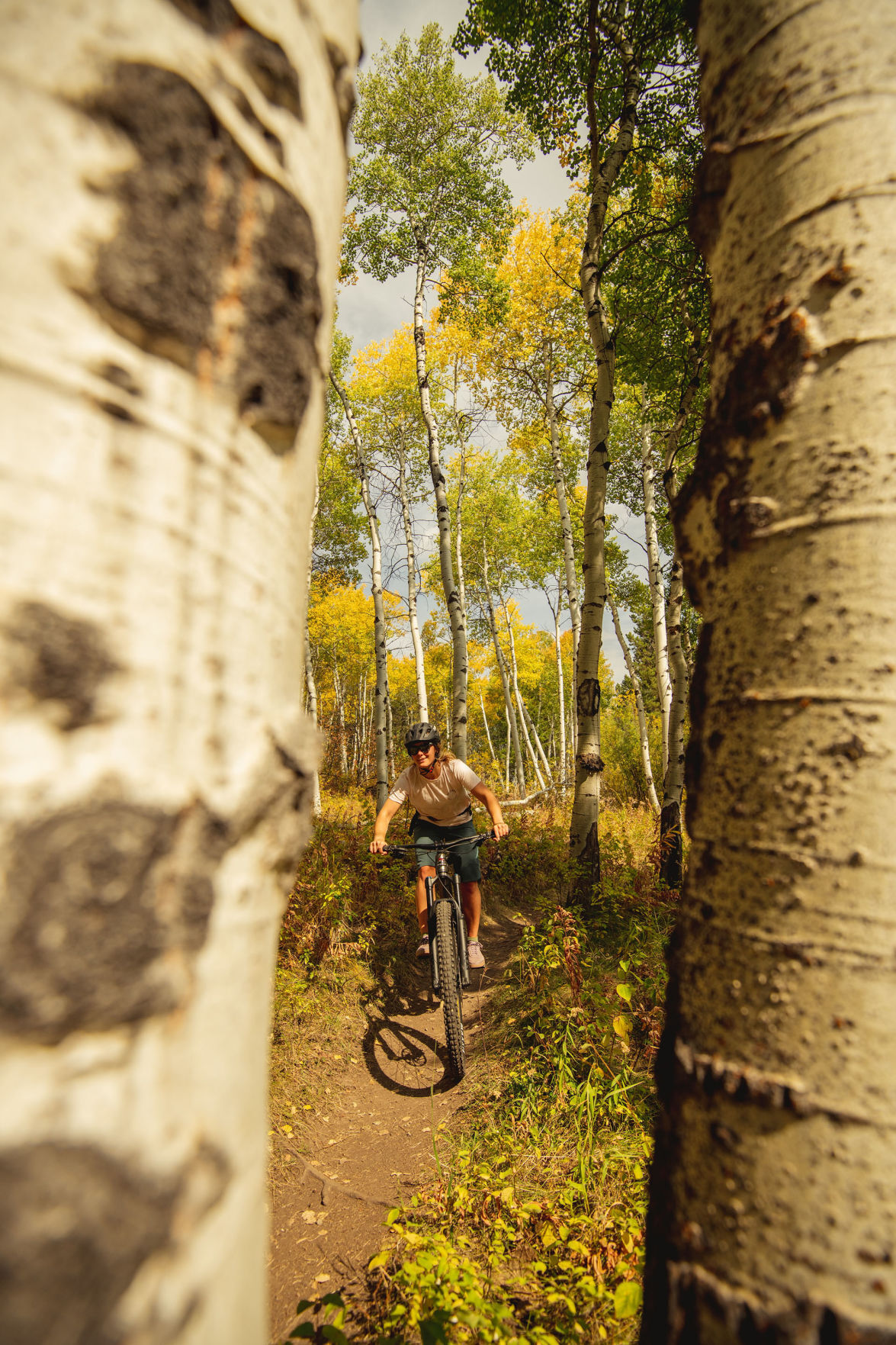 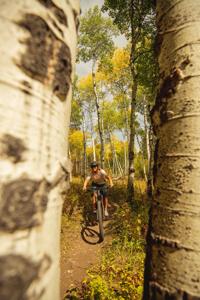 Caite Zeliff rides singletrack as the leaves begin to turn.

Caite Zeliff, the 2019 and 2020 Queen of Corbet’s Couloir, airs off the top of the iconic chute to launch her second run during the 2020 Kings and Queens of Corbet’s competition at Jackson Hole Mountain Resort.

Caite Zeliff gets airborne last fall on the east side of the valley.

Caite Zeliff rides singletrack as the leaves begin to turn.

In fact, many health experts warn pro athletes may turn to summer sports like mountain biking (or paragliding) as a coping mechanism, unwilling to cut ties with the kind of action, and its corresponding community, which has such an outsized impact on these athletes’ mental health.

As an avid skier as well as a behavioral health counselor, Ryan Burke sees it all. He says plenty of pro skiers use the sport as their form of therapy, whether with boot-pack partners or in the quiet of their own mind at the top of a cliff jump.

It is this point of the year that Zeliff has scrutinized most in recent months. Since she spoke with her roommate and fellow Teton Gravity Research athlete Taylor Fry about mental health last winter, Zeliff has been thinking a lot about fear.

Known for her mantra “Hold It Wide Open” the wild and free athlete has made a name for herself by throwing big air into Corbet’s Couloir, winning the Queen’s crown twice.

Part of her fearlessness came from another, more personal mantra she’d whisper before dropping in on particularly gnarly runs.

“I release my fear to my higher self with love and light,” she would tell herself.

“Then, I’d pretty much black out for the entire run.”

When she told her sports psychologist, Dr. Christina Heilman, about this experience, which she thought was the ultimate expression of flow — a heightened euphoria many athletes and high-achievers strive for — Heilman didn’t see it that way.

Instead, she said it was a red flag, a sign that Zeliff was doing something unhealthy.

Turns out, Zeliff eventually realized, you can’t release your fear. “It doesn’t work that way.”

She read a book by one of the best woman skiers in the world, Kristen Ulmer, who retired early after suffering from depression and anxiety and set out to teach others the way fear works.

In the opening chapter of the book, “The Art of Fear: Why Conquering Fear Won’t Work and What to Do Instead,” Ulmer calls it “a humanity-wide pathology that is cooking us all alive: the repression of Fear.”

Since coming to terms with her own experience in the mountains, Zeliff has changed her pre-ski routine. Now, instead of releasing her fear at the top of runs, she allows herself to sit with it for almost a minute.

That forced reckoning, she says, reminds her that she’s human — and being afraid is very much a natural part of the human condition, especially while staring down a 20-foot cliff drop.

To cope with his own mental health and the physical toll of the sport, Ryan said he has to take breaks, not just from the skiing but also from the social media world that is intrinsically tied to the experience.

In the winter, he’ll pore through highlight videos, studying them like a football player watching playback tape. It’s such an obsession, the consumption and the skiing itself, that Ryan extends his “blackout” period through the entire winter season.

It’s only now that he’s coming up to breathe.

And as many of the athletes will tell you, the breath spring offers isn’t always refreshing. As much as they try to extend ski season with trips to Alaska and hikes to narrow couloirs, eventually they have to stand up their skis and walk away for months.

That halt can cause serious depression, despite the images you may see on Instagram of cracked beers and springtime picnics, complete with sunsets and frisbee-chasing dogs. Certainly many of the outdoor lifestyle companies that sponsor these athletes would like you to think it’s a seamless transition.

Part of the problem is that hopped-up emotions are still never released. Whether it’s the crash of unresolved tension — similar to the massive realizations that cause such painful retirement anxiety and depression (like for the book author). And it’s that lack of release that folks like Burke are trying to address.

Despite all the ways that the sport of skiing can boost your health — and the ways the ski community is becoming increasingly open to mental health discussions, sometimes it’s still necessary to see an actual therapist, and that’s still hard for many athletes to admit.

“There’s still this culture that it’s a bad thing, it’s hard for athletes to say ‘I have a therapist.’ ”

Ryan, who has met with Burke both as a friend and for therapy sessions, is still reluctant to admit that he needs help. He’s not shy in other aspects of his life, and he said most of his best mental heath chats have come on ski expeditions, but when it comes to the full experience of therapy, or some of his “darker moments,” there’s definitely a desire to hide them.

That creates an aura of perfection, especially for those watching from the outside.

Zeliff is increasingly trying to present a more honest version of herself, especially on social media, where she knows plenty of young girls, including her 15-year-old sister, are watching her.

“I just want to make sure that if they’re young girls following me, they know that I crash too, you know, and if they crash, that’s okay. And it’s like, the whole story.”

If you check her Instagram stories, you’ll see sunset scenes of her paragliding in Salt Lake. But the goal is to balance that.

Ultimately, that’s what mental health, like all health, comes down to: balance.

It’s just tricky when you’re a mountain sport athlete, balancing at the extremes.

“Balance has to be a personal decision,” sports psychiatrist Stuart Sugarman said. “The more information that somebody has about themselves and their reality — what they want and what they’re willing to do — that’s what is going to lead to the best decision.”

Sugarman works with both professional athletes and amateurs to help them arrive at a more honest vantage or introspection. Often, he’s fighting the lure of social media success, which “amplifies” an existing need for admiration and can distort athletes’ risk evaluation.

Ryan describes it as “panic mode” anytime you’re not creating.

Luckily the valley is home to not just beautiful Instagram backdrops, but also a robust network of mental health counselors and therapists. As this community continues to talk more openly about the mental component of extreme sports, Sugarman is hopeful the stigma will melt away.

In treating elite athletes, he’s still seeing a hesitancy, a lingering resistance that’s only broken when a loved one (or sometimes a sponsor) encourages that athlete to seek help.

But when he does get through to them, he reminds athletes like Zeliff that being “the best in the world” is a light that only shines for a moment.

Many times he’s seen athletes whose entire identity is tied up in their sport, and the question becomes “How do you have a sense of self-esteem that goes beyond that particular skillset?”

It’s a question the athletes are left asking themselves too, particularly once the snow melts. Ryan, who recently returned from a San Juan float trip with his parents, said the offseason can feel like “intense relief,” but also “interspaced periods of existential crises.”

“You’re given space to think about, you know, normal anxieties like the future, and dumb things you said in high school, and all that,” Ryan said. “All those things come crashing in. And so yeah, I work to be busy in the offseason. Enjoying myself, breathing a little bit, but also I spend a lot of time mountain biking.”