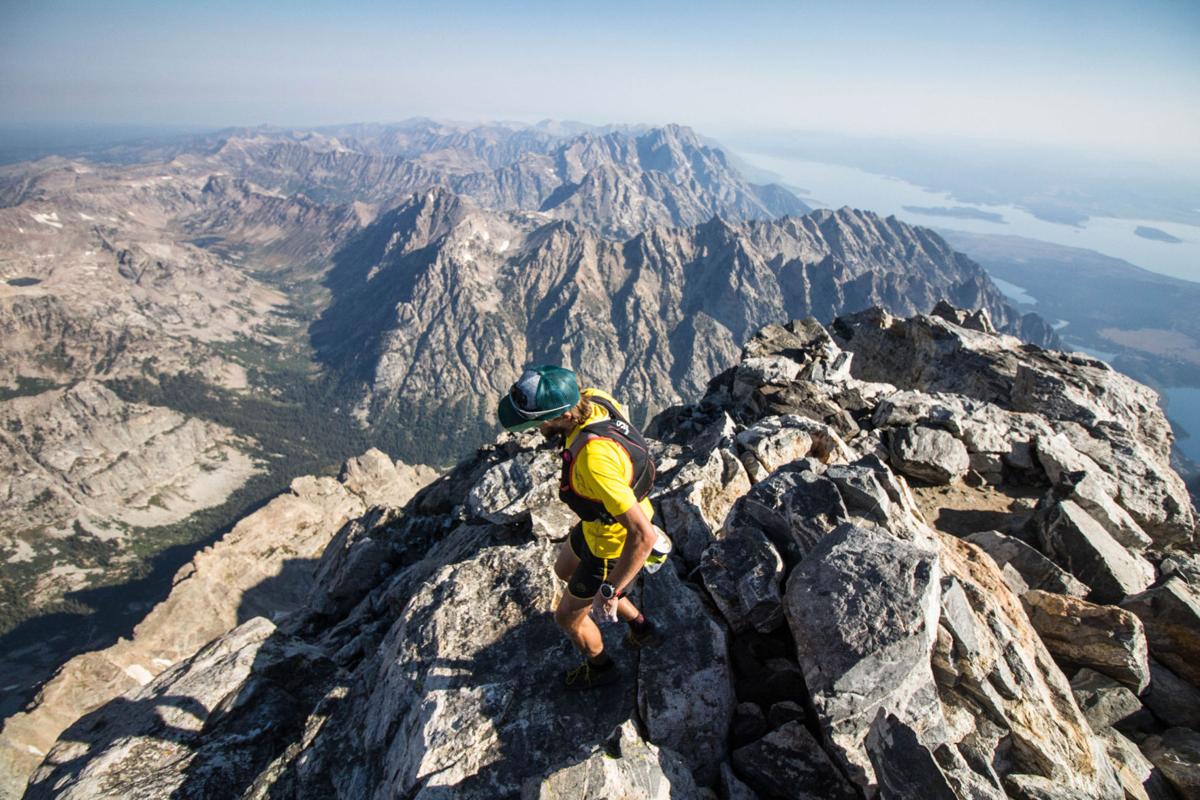 Nick Elson summits the Grand Teton on his way to setting a new record on the Grand Traverse Aug. 16. Elson beat the previous record by 19 minutes with a time of 6:30:49. 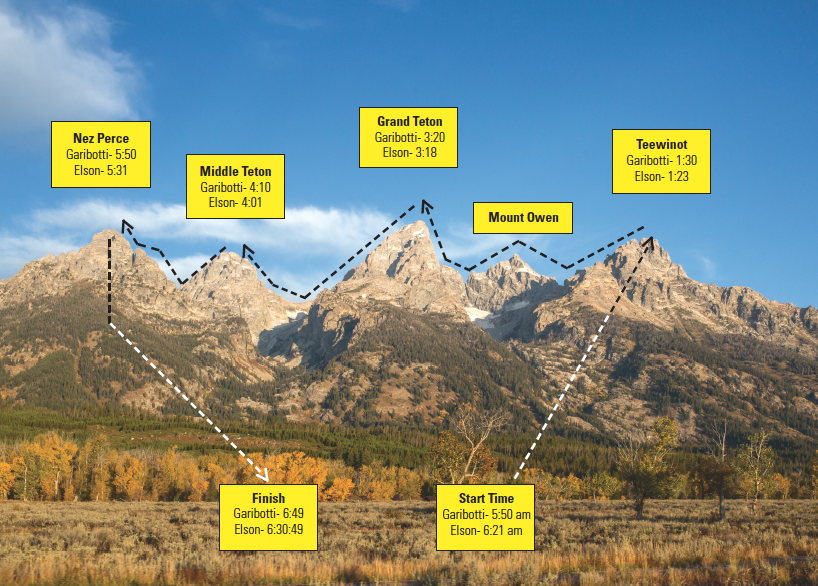 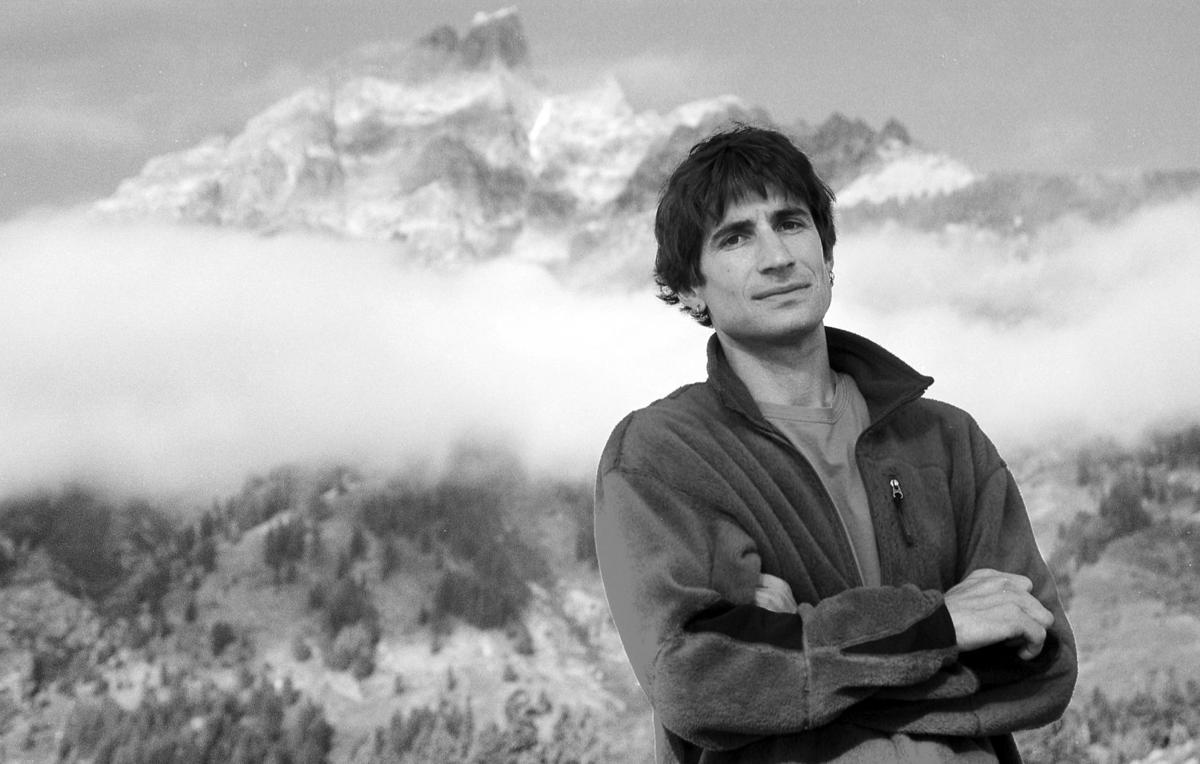 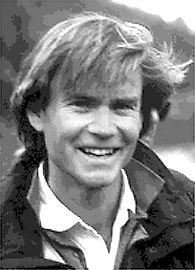 Nick Elson summits the Grand Teton on his way to setting a new record on the Grand Traverse Aug. 16. Elson beat the previous record by 19 minutes with a time of 6:30:49.

Canadian climber-runner Nick Elson left the Lupine Meadows parking area at 6:21 a.m. Aug. 16 as he attempted to break a 16-year-old speed record in the Tetons.

The objective was the Grand Traverse, a nearly 14-mile north- to-south traverse of 10 of the Teton’s central peaks. It has a cumulative elevation gain of about 12,000 feet and takes even the strongest and speediest climbers close to 24 hours to complete.

Elson was gunning for Rolando Garibotti’s time of 6 hours and 49 minutes set on Aug. 26, 2000. Garibotti, a former Exum guide known for his bevy of speed records and first ascents around the world, shattered the late Alex Lowe’s record of 8 hours and 15 minutes, set in 1988.

The low mark before Lowe’s record — which he completed in tennis shoes — was 20 hours.

“I believe it is best suited to a climber that runs, such as Nick or myself, rather than a runner that climbs,” Garibotti said. “You need to be able to free-solo 5.8 in running shoes, quite fast, so you need to be a pretty solid rock climber to do it safely.”

Elson defended his 2015 Canadian Mountain Running Championships win in June and recorded a second-place finish at Alaska’s Mount Marathon Race in July. He has completed one-day ascents of the North Face of Eiger in Switzerland and the Nose on El Capitan in Yosemite National Park, two routes renowned for their sustained difficulty and commitment.

The Squamish, British Columbia, athlete had climbed a number of the individual peaks on a previous Tetons trip. He spent the week before his attempt in the range studying various sections of the route with friend Eric Carter.

He even gathered beta and encouragement from Garibotti, known as “Rolo” to most, through the two’s mutual climbing partner Colin Haley. Elson was as equipped as anyone to take down Garibotti’s record.

“I think that Rolo’s time for the traverse represented the high-water mark for the type of thing that I enjoy: moving quickly, efficiently and unencumbered in the mountains,” said Elson, 32. “The history of the traverse was inspiring, and I also knew that it was the type of challenge that suited me.”

Elson set off in a T-shirt and shorts, a cap and a running vest with two 500-milliliter water flasks, which he refilled on Mount Owen and at the Lower Saddle below the Grand Teton. He carried his cellphone, a windbreaker he never wore and 1,000 calories in energy gels.

A quick 83-minute stroll and nearly 5,600-foot climb up the east face of Teewinot had Elson at the mountain’s 12,326-foot summit at 7:44 a.m. He then traversed to the top of Owen’s 12,928-foot peak before making his way across the extremely rugged terrain of Gunsight Notch en route to the north face of the Grand Teton.

Climber extraordinaire and Exum guide Mark Smiley was guiding a client along the North Ridge of the Grand when Elson snuck up behind him.

“He was moving so fast,” Smiley said. “Made me feel like a jealous tourist.”

Smiley knew exactly what Elson was up to. He had given Elson — who he met on Denali in 2012 — beta on the climb a few days prior.

No stranger to the route, Smiley said he was amazed that Elson was even attempting to shoot for the record.

“It’s a really, really big deal to go for the traverse without a rope,” Smiley said. “Climbing up is only 5.7 at the hardest part, but when you do it ropeless you are required to downclimb a bunch of heads-up terrain on somewhat loose rock.”

Elson climbed the Italian Cracks to the mountain’s 13,775-foot peak before descending toward the Lower Saddle. A clear day with warm temperatures made for dry rock with no ice in the cracks.

As he jogged across the Catwalk toward the Upper Saddle a nearby roped climber elicited a plea of “Please don’t die” to the unroped Elson.

Four hours and 1 minute into his route he topped out at 12,804 feet on Middle Teton at 10:22 a.m. He knocked out South Teton, Ice Cream Cone, Gilkey Tower, Spalding Peak, Cloudveil Dome and was on top of Nez Perce’s 11,901-foot summit at 11:52 a.m. An hour later he was back at Lupine Meadows parking area with a gallon of water in his hand and a new Tetons record in his back pocket.

Elson has a laundry list of competitive achievements as a runner, climber and a ski mountaineer. He said this particular accomplishment comes in near the top of the list.

“I would definitely rank it among my greatest all-time athletic accomplishments,” Elson said. “Because Alex and then Rolo set the bar so high, it meant that I had to give it my absolute best effort and I was lucky that everything came together for me.”

Elson grew up perusing climbing magazines and said he remembers reading about Garibotti when he broke the record 16 years ago.

“I don’t know if Rolo’s effort necessarily got the recognition it deserved at the time,” Elson said. “However, I think that people familiar with what is involved held it in high regard.”

Garibotti was thrilled to see Elson take down his record and was overcome with nostalgia.

“I was psyched for him. I was also a bit melancholic, missing the time and place in my life, now long passed, when I had set that record,” Garibotti said. “I still remember vividly how good such days used to feel and was jealous that Nick had just had one. I was also happy to see my record go. It allows me to move on.”

Garibotti’s record stood for 16 years. Lowe’s lasted for 12. Garibotti is impressed by Elson’s feat along with his own record-setting day in the mountains at the ripe age of 29. But, in Garibotti’s mind, neither accomplishment measures up to the man who first had the intuition and ability to tackle the traverse alone.

“Alex had the vision to imagine the Grand Traverse as a run, so to speak,” Garibotti said. “Nick and I improved on what Alex did, but the creativity was all his. I am a lot more impressed by creativity than by performance.”