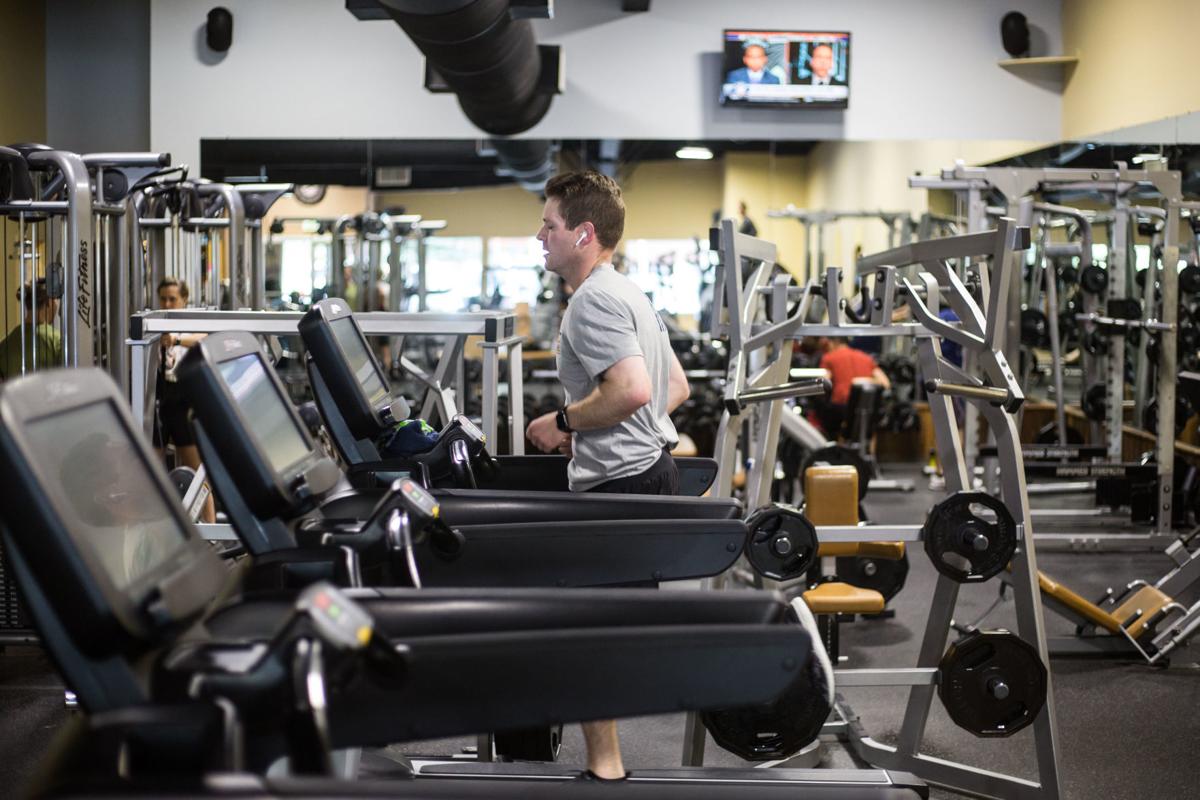 Peter Dornisch exercises Tuesday at Jackson Hole Health and Fitness. Teton County gyms were allowed to reopen May 11 after closures due to COVID-19. 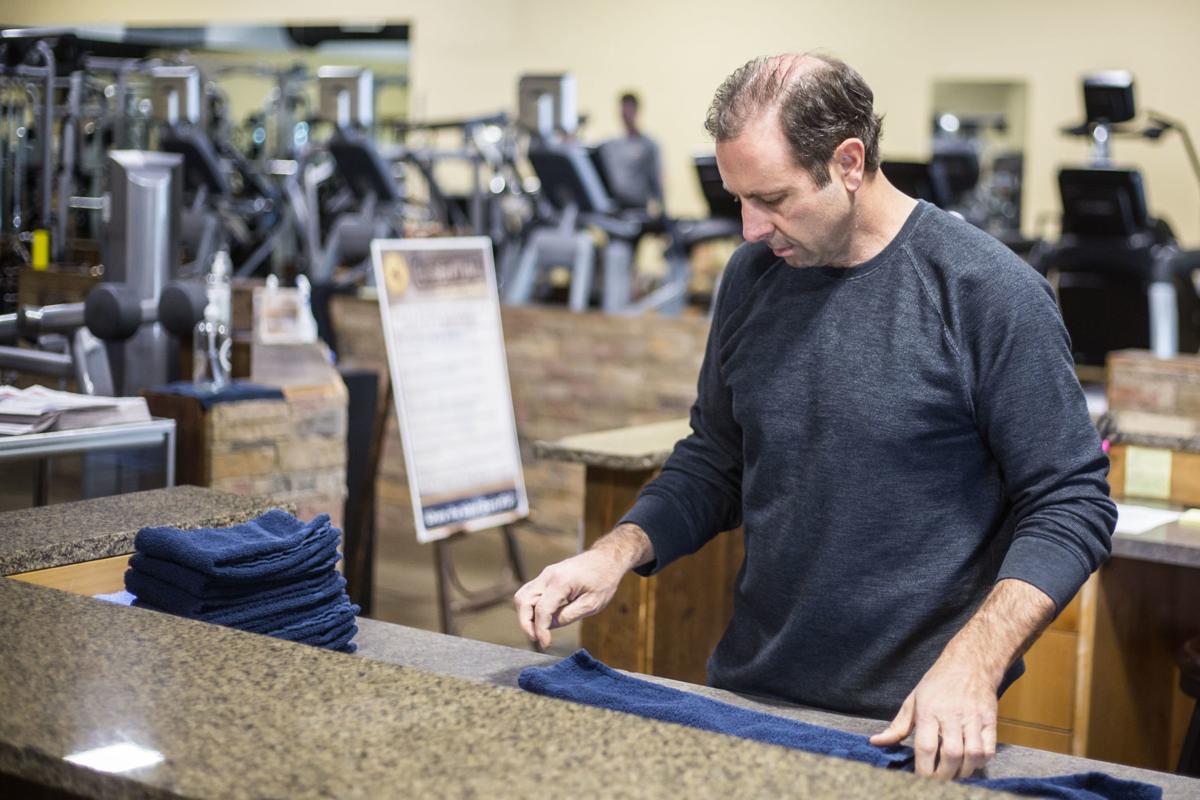 Chuck Lakovitch folds towels at Jackson Hole Health and Fitness. The gym did a floor-to-ceiling cleaning during COVID-19 closures and has switched to hospital-grade sanitizers since reopening. 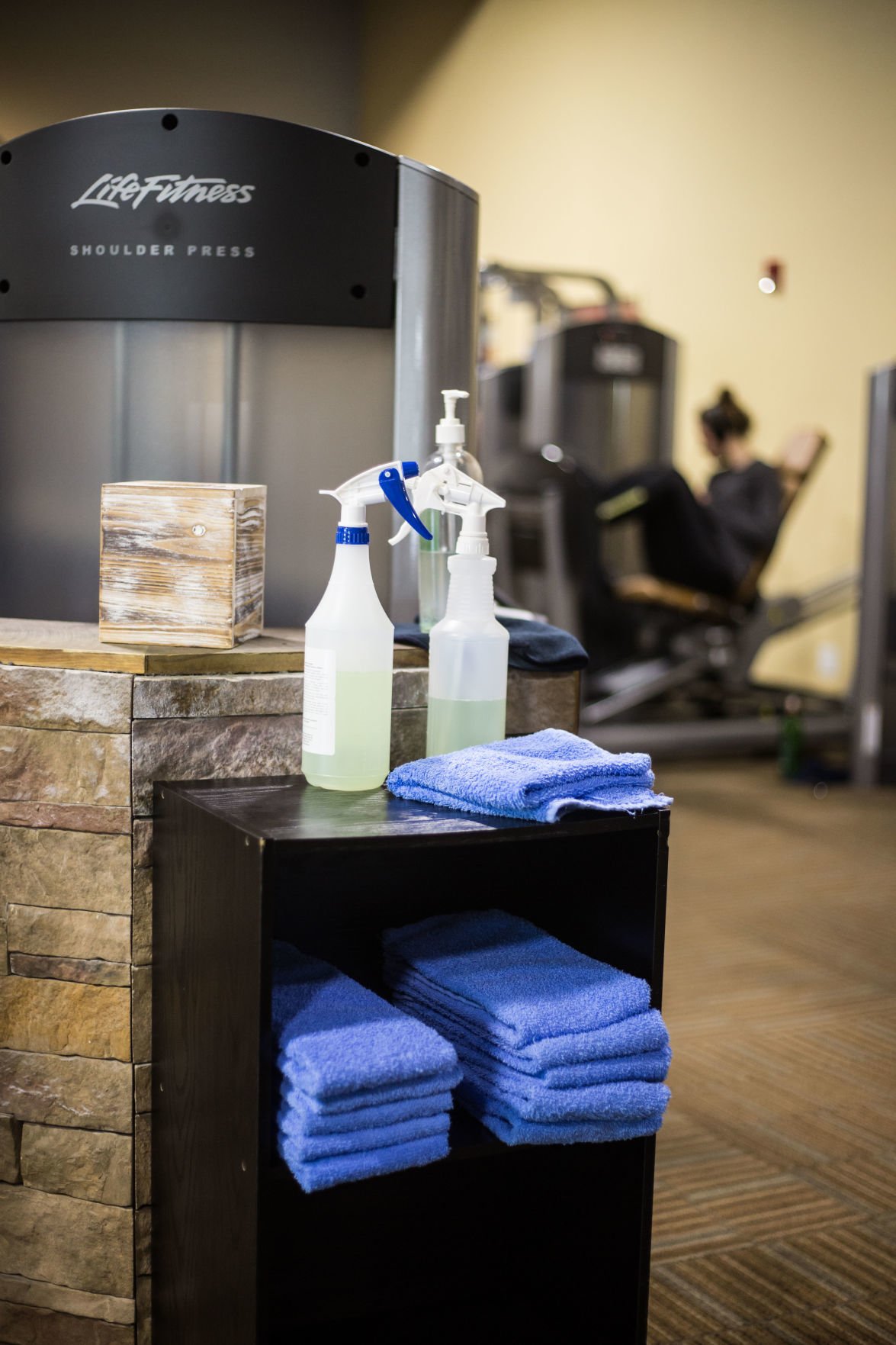 Sanitizer and towels are stationed around Jackson Hole Health and Fitness to encourage frequent cleaning of shared equipment.

Peter Dornisch exercises Tuesday at Jackson Hole Health and Fitness. Teton County gyms were allowed to reopen May 11 after closures due to COVID-19.

Chuck Lakovitch folds towels at Jackson Hole Health and Fitness. The gym did a floor-to-ceiling cleaning during COVID-19 closures and has switched to hospital-grade sanitizers since reopening.

Sanitizer and towels are stationed around Jackson Hole Health and Fitness to encourage frequent cleaning of shared equipment.

Even during quarantine and social distancing, gym-goers had outdoor options like running and cycling.

Not so for JC Scheller, a mixed martial artist who trains at Jackson Hole MMA and Fitness. Cardio and weight-training can only go so far for someone whose athletic payoff comes inside a cage instead of on a starting line. He needs sparring partners for stand-up training and rolling partners for grappling.

After taking the better part of March off he was able to get some training partners for in-home workouts. Jiu-jitsu training gear included a face mask. It helped, but it’s just not the same as in-gym training with his team.

“That month was a little bit out of the ordinary,” he said.

Scheller hasn’t yet resumed training at Jackson Hole MMA and Fitness, but he expects a bit of a lag as he adjusts to the schedule of real-life sparring partners and being able to breath without a cotton barrier.

“It’s going to be difficult starting over,” he said. “We take a week off and in just that week your breathing changes.”

Most people aren’t quite in Scheller’s position, and the return to gyms this week served as an opportunity to resume normality. As orders from the state last week loosened restrictions on public gatherings and businesses, gyms and fitness studios were able to reopen, though the way they look today isn’t the same as they did at the end of winter.

At Jackson Hole Health and Fitness the floor had something of a facelift. Hand sanitizing stations are around every corner. Some equipment has caddies on it with sanitizer. For the cardio deck, management is asking members to spread out, leaving a treadmill between each patron.

“When all this happened, we just went to work to put together a plan so we’d be readily prepared for everything,” co-owner Jan Harms said. “We put together a new equipment CDC protocol with a hospital grade sanitizer … and our members have been awesome.”

Harms said it has been the standard at JH Health and Fitness for members to do their part in sanitizing equipment after use as well as the staff, even before the coronavirus made sanitizer a prized commodity. Over the past week, Harms said, there’s been a steady increase in members returning to the gym to reclaim some of the routine lost to the past few months of uncertainty.

“I think there was an instant feeling of feeling safe in here and feeling good about it,” Harms said. “We just have a great group here with really good gym etiquette, just cleaning things up before and after every use and being really diligent that way.”

While the gym itself is beginning to fill back up, classes are coming around more slowly. And that’s likely the case not only at JH Health and Fitness.

For Carey Clark, who runs the Core Changes studio, the past few months have forced a new development in her business. The in-person classes of 15 to 20 people have become virtual classes, with scheduled times to log on from home instead of in person at the studio. Though the recent health orders allow her to resume her in-person classes, she’s not jumping right back in. For the foreseeable future virtual classes will continue, with some small, intimate private sessions for one or two patrons as well.

In truth, this time of year is slow for a business like Core Changes anyway. A community like Jackson is going to value fitness endeavors outside for the short summer season, so this lull gives her an opportunity to change her business model for the longterm, building something that lasts beyond the pandemic.

“The dynamics of my studio was going to change,” Clark said. “We used to have classes of 16, 20 people, and that’s probably no longer the case. You sort of just roll with the punches and grow and change with it. This might actually be kind of a good changing point anyway, so I’m not looking at it like I’m behind or not opened up.”

Though the in-house training at JH Health and Fitness doesn’t look to be moving to the digital space, its changes are expected to stick around. An uptick in emphasis on sanitation is the plan for the future, no matter what restrictions loosen.

“This is something we’ll keep going with, no matter what,” Harms said. “It’s just good standard operating procedures for us to do. It’s a constant reminder because it’s right there, and we’ll continue that without any problem.”