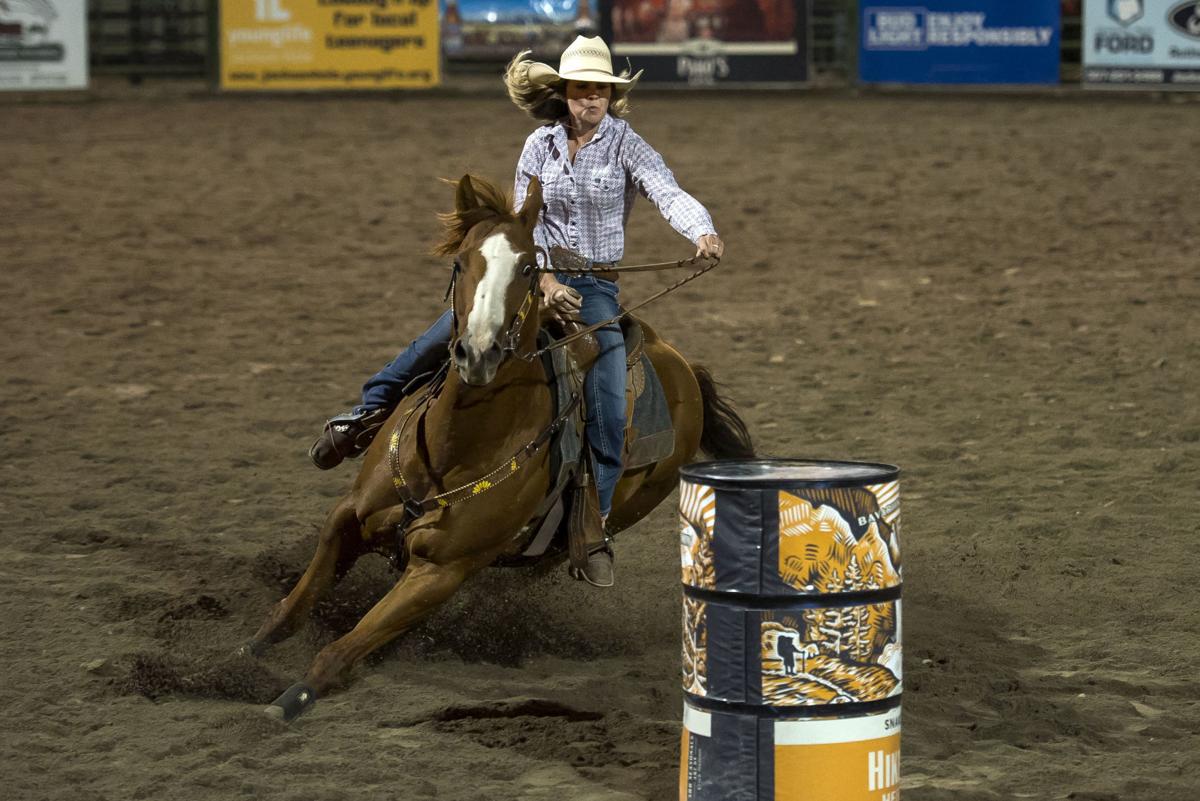 Kodee Williams competes in barrel racing for a time of 16.967 seconds during the Jackson Hole Rodeo Finals on Saturday at the Teton County Fairgrounds. 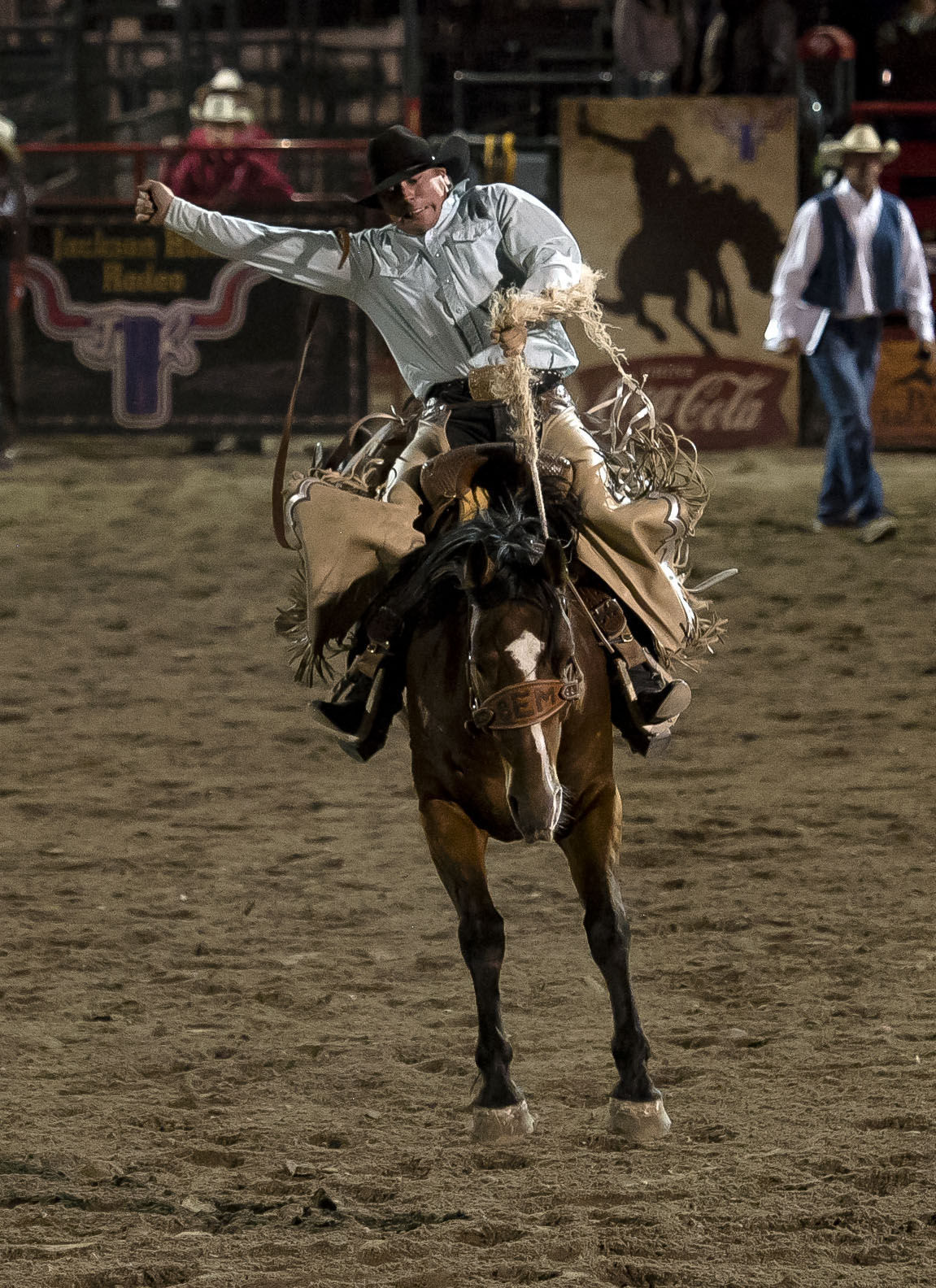 Blaine Matthews rides Roderick for a winning score of 85 during the Jackson Hole Rodeo Finals on Saturday at the Teton County Fairgrounds. 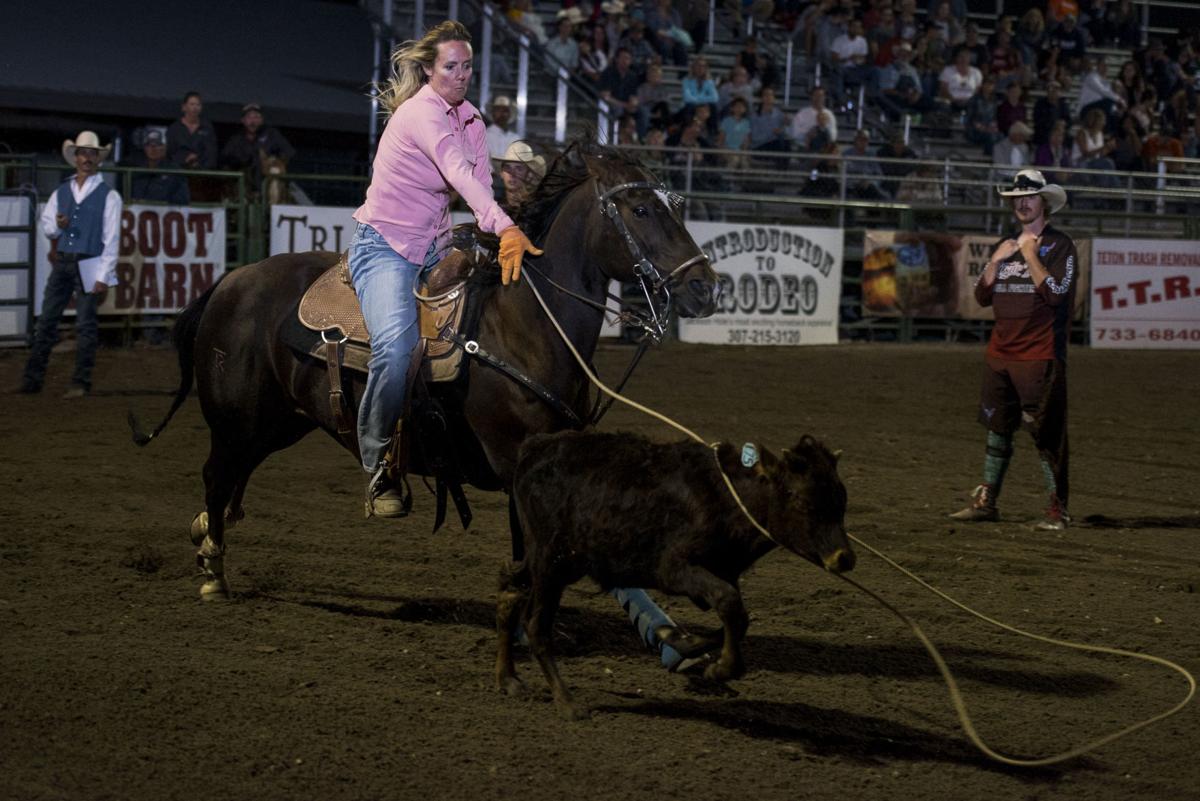 Ronda Skinner ropes a calf for the winning score of 3.6 seconds during the Jackson Hole Rodeo Finals on Saturday at the Teton County Fairgrounds. 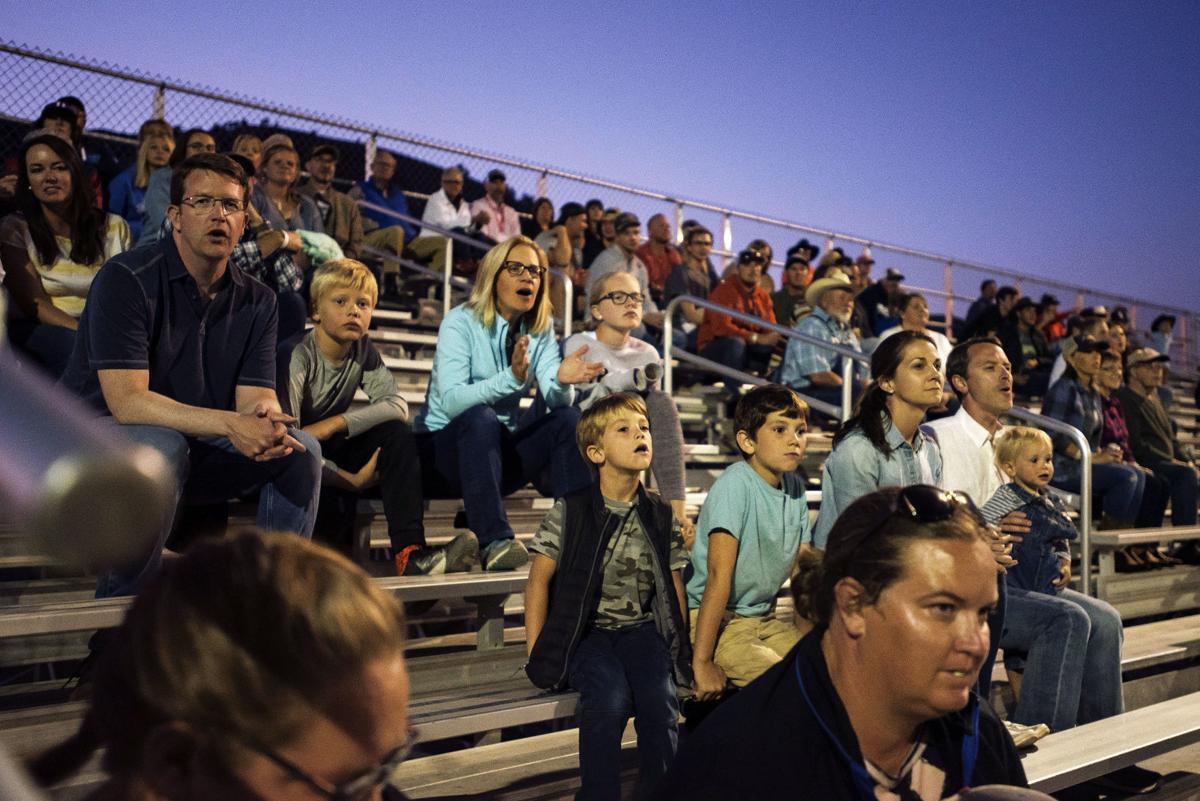 The audience watches team roping during the Jackson Hole Rodeo Finals on Saturday at the Teton County Fairgrounds. 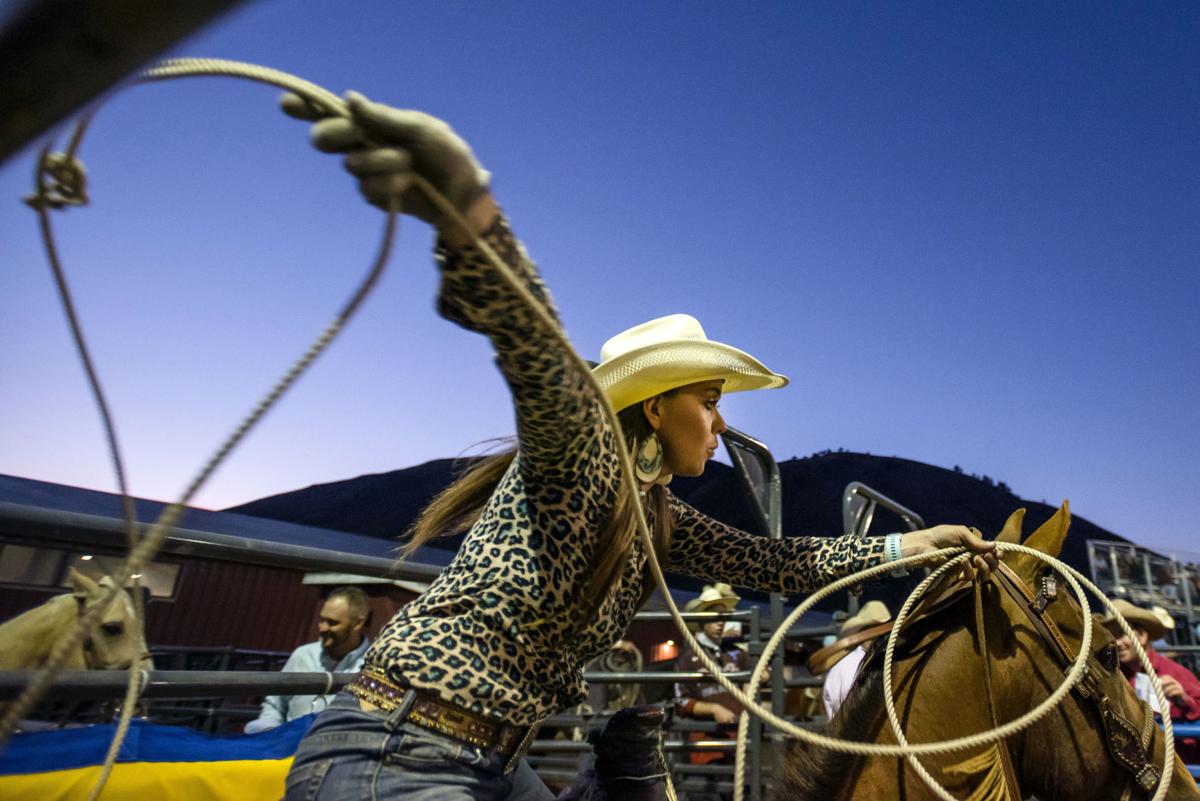 Sadee Kreikemeier takes off from the roping chutes while competing in breakaway roping. 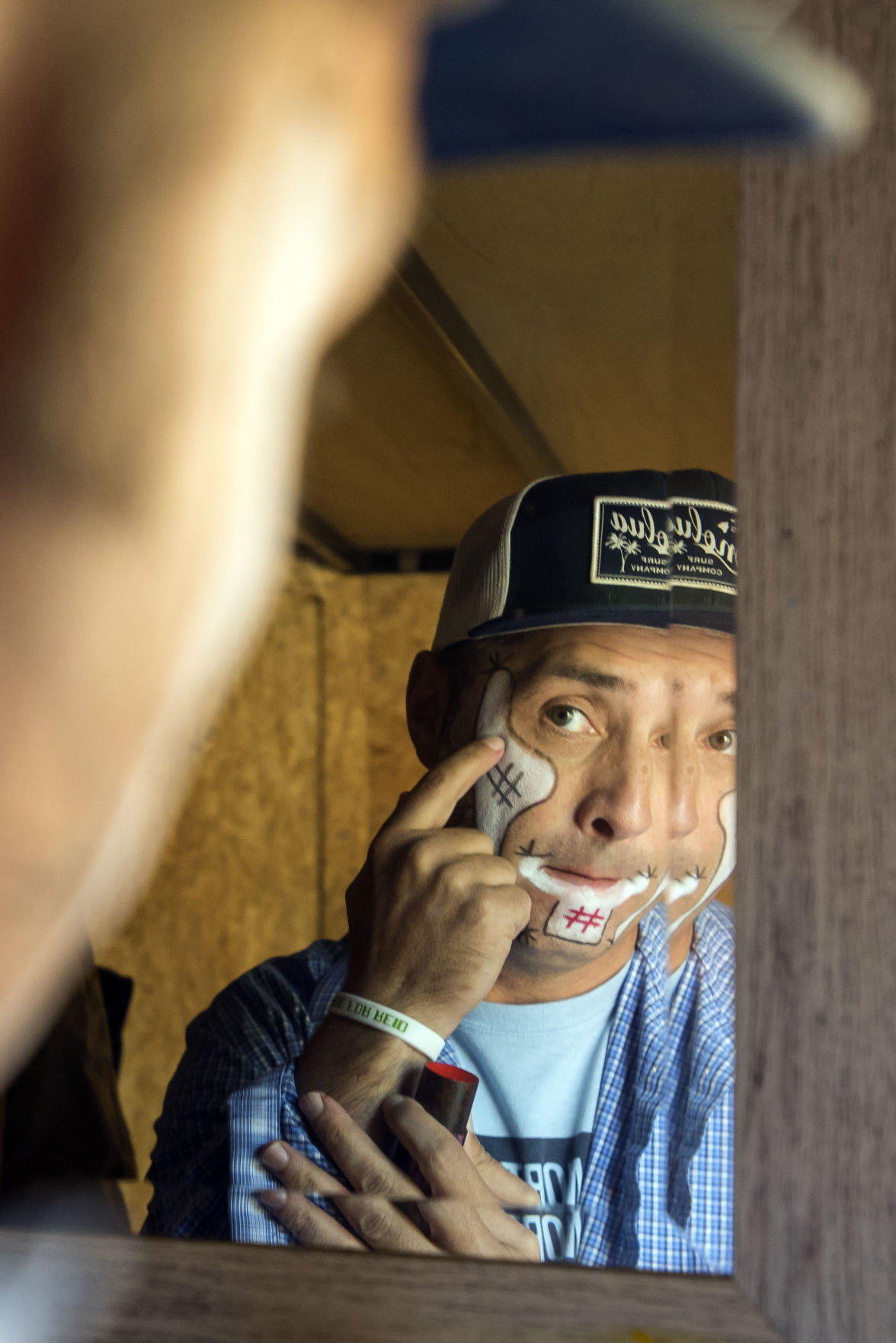 Kodee Williams competes in barrel racing for a time of 16.967 seconds during the Jackson Hole Rodeo Finals on Saturday at the Teton County Fairgrounds.

Blaine Matthews rides Roderick for a winning score of 85 during the Jackson Hole Rodeo Finals on Saturday at the Teton County Fairgrounds.

Ronda Skinner ropes a calf for the winning score of 3.6 seconds during the Jackson Hole Rodeo Finals on Saturday at the Teton County Fairgrounds.

The audience watches team roping during the Jackson Hole Rodeo Finals on Saturday at the Teton County Fairgrounds.

Sadee Kreikemeier takes off from the roping chutes while competing in breakaway roping.

Nine years ago Ronda Skinner was in Jackson week in, week out, taking to the saddle for her turn in breakaway roping.

She claimed the championship that year, winning the first saddle of the Jackson Hole Rodeo era and bringing it to her home in Idaho Falls.

By the time the final night of this year’s finals rolled around on Saturday, Skinner’s fourth JH Rodeo year-end title was wrapped up, and her final go in 3.6 seconds was good enough for a cumulative 9.93 time across two nights, assuring the finals title as well.

She did it all atop her horse Roxie, who wore that first 2010 saddle while Skinner claimed her fourth.

As for why Skinner has made the rodeo nearly two hours from her home her priority, well, that’s simple.

Her knowledge of winning the saddle is equally simple. Her frame of mind is the same every time she awaits her turn to dart into the arena.

Meanwhile, from the bucking chutes, Pinedale’s Blaine Mathews was far enough ahead in the points standings that he didn’t have to worry much about being caught heading into the final week.

Even so, he capped off his fifth saddle bronc year-end title with back-to-back nights of top scores. He went 83.5 on Friday and then 85 on Saturday night atop a horse named Roderick.

Mathews was pleased, and perhaps relieved, to get another saddle in Jackson, where his father and grandfather both rode bucking horses. But moments after tipping his hat to the crowd following his winning go, he was mostly relieved to get one over on the horse that had his number a couple weeks back.

“He’s a really nice horse, and he has a couple different trips, but he bucked me off that trip,” he said of their last meeting. “I kind of had a little redemption tonight.”

Mathews allots most of his time in the arena chasing pro rodeos, but manages to slip in and out of Jackson on Wednesday nights for a quick 8 seconds before hitting the road again.

He said he wasn’t too concerned with watching his standings throughout the summer. Rather, he was mostly just trying to get one horse a week rode, and hopefully, ending up with that fifth saddle.

“For the pro rodeo trail this was a great place for me to come practice,” he said. “If I’m having a rough go, come here and kind of make things right.

“At the same time I can get on a great horse like tonight. He’s a pro caliber horse, it’s the real deal too.”

Mathews didn’t have much time to celebrate. He and his fiancee, Kodee Williams, needed to load up and head straight for Dillon, Montana, where they’d each take a chance at lining their pockets at the annual Dillon Jaycee Rodeo.

Like Mathews, Williams’ summer of barrel racing in Jackson was marked by dominance. Earlier in August she set the arena record of 16.88 with her horse Rosie. On Saturday night, she put a bow on the year-end and finals title with a 16.967 to earn not just her first JH Rodeo saddle, but her first saddle ever.

“I’ll probably cry, because I cry whether I’m happy or sad,” she said of her expectations when she lays eyes on her saddle. “But I’m just so thankful for Rosie — she’s seriously the best horse I’ve ever had.”

Those tears may flow in elation for victory, but also in despair for possibly racing Rosie for the last time. The plan is to send Rosie off to college with Williams’ younger sister, Kristen, who heads to Casper College this fall.

Williams is the oldest of three sisters from Pinedale who all vied for the year-end title this year. Heading into the last week of rodeo, Kodee was well ahead with 125 points, but sister Kassidy sat second with 88.

“I’m very competitive,” Kodee said. “Me and my two sisters, we all barrel race, and we’re always neck and neck. ... That was kind of the goal, get [Rosie] ready so Kristen can go to college and be successful on her, too.”

As an X-ray tech at St. John’s Medical Center, Williams doesn’t get much chance to sneak away from work to rodeo, but she’ll plan on taking a crack at earning a second saddle when summer returns next year.

What horse she’ll be on, that’s very much up in the air.

“I’ll probably be starting over with a new horse,” she said. “But that’s just kind of how it goes.”

The year-end champions won’t be announced officially until the rodeo’s banquet on Sept. 10, and when the arena cleared and the stands went empty for the final time Saturday night, bull rider Riley Barg was still unsure where he’d stand once all the points were added up and checked twice.

Saturday night belonged to him, though, with an announced 83 points earned atop Tomahawk Jo. In the final ride of the night and the rodeo, Payton Nelson went 82 on Pop Knot, which unofficially tied Barg for the finals victory on two rides across Friday and Saturday night.

“I knew he was going to be right there out the door to the left, so I kind of knew what he was going to do,” he said of Tomahawk Jo. “You’ve just got to stay hustling on all of them.”

Barg estimated he’d be either first or second in the year-end standings once the dust settled. As for tying with Nelson in the finals, that wasn’t much to get hung up about.

“It feels good to tie with one of my buddies,” he said. “I don’t know what they’re going to do about it, but I do like tying with my buddy.”