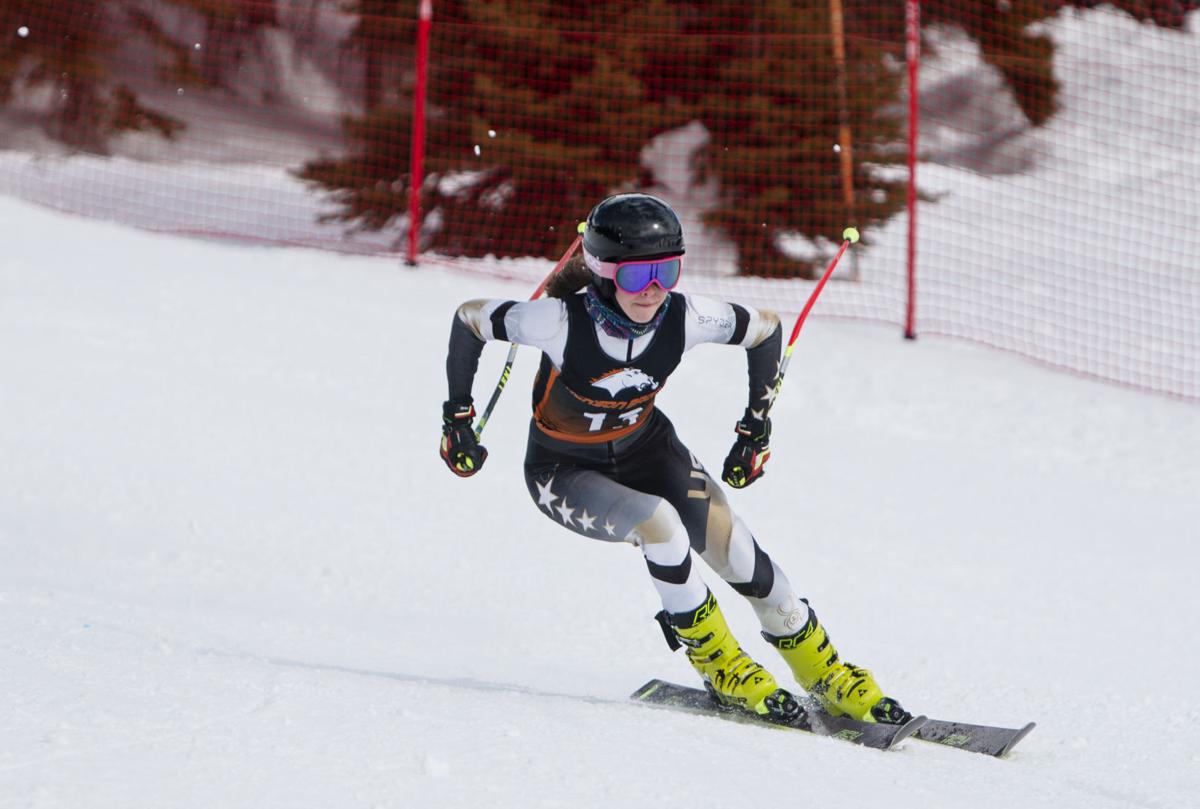 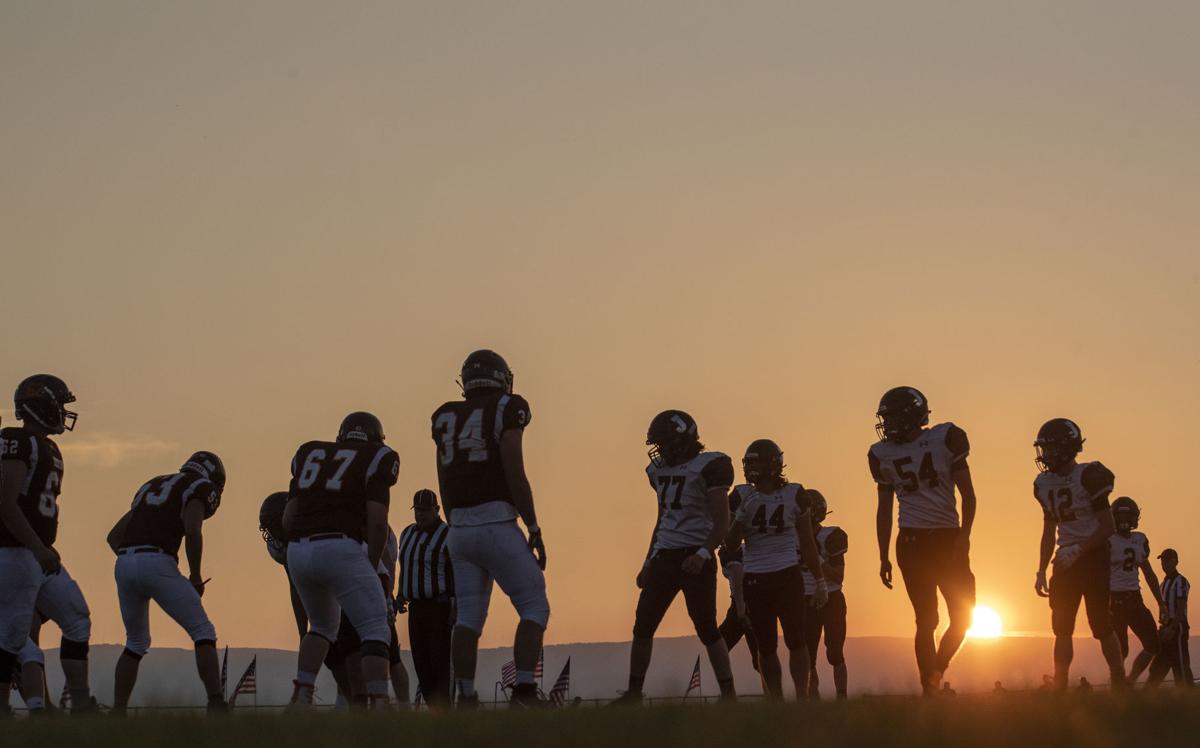 The Jackson and Teton High School football teams line up for a play August 28 in Driggs, Idaho, as the sun dips behind the Big Hole Mountains. The Broncs came up a game short of winning their first state title since 2007, falling to Cody in the championship game. 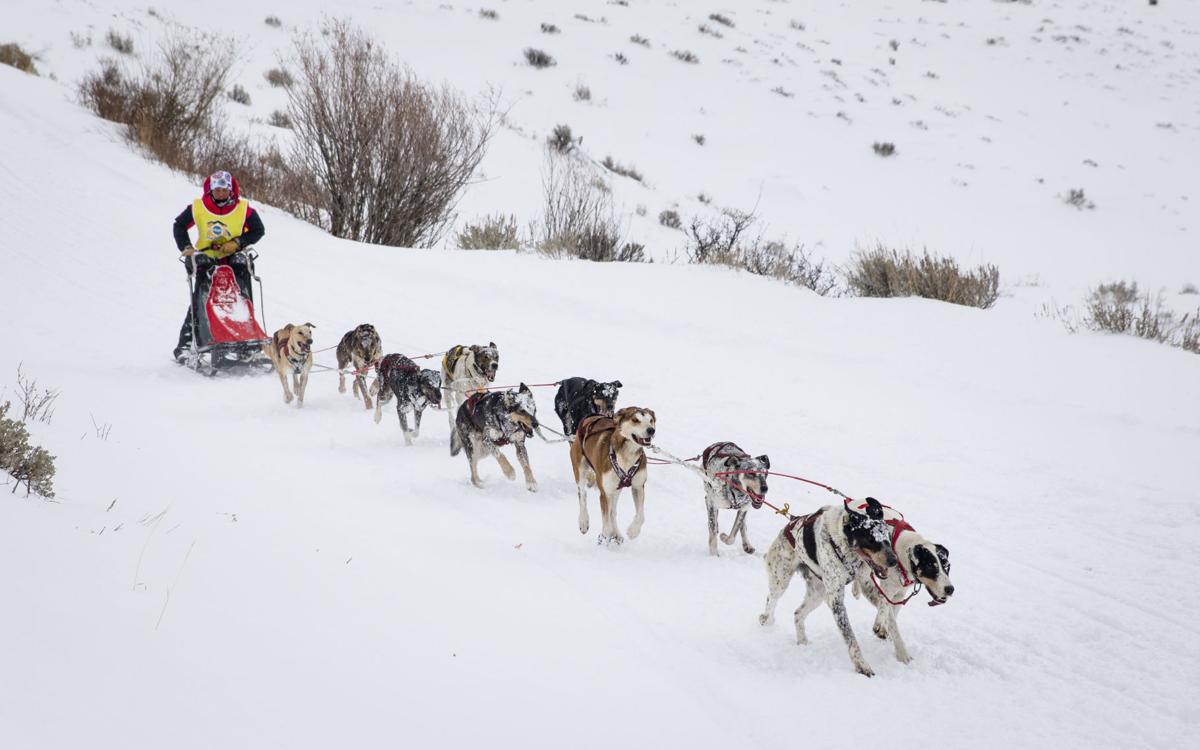 Anny Malo, from Quebec, pushes her team over the finish line during the last leg of the 2020 Pedigree Stage Stop Race at Lower Slide Lake. Malo’s team turned in a time of 2 hours, 29 minutes and 17 seconds for the day and a total time of 15:55:11 for her second consecutive win. 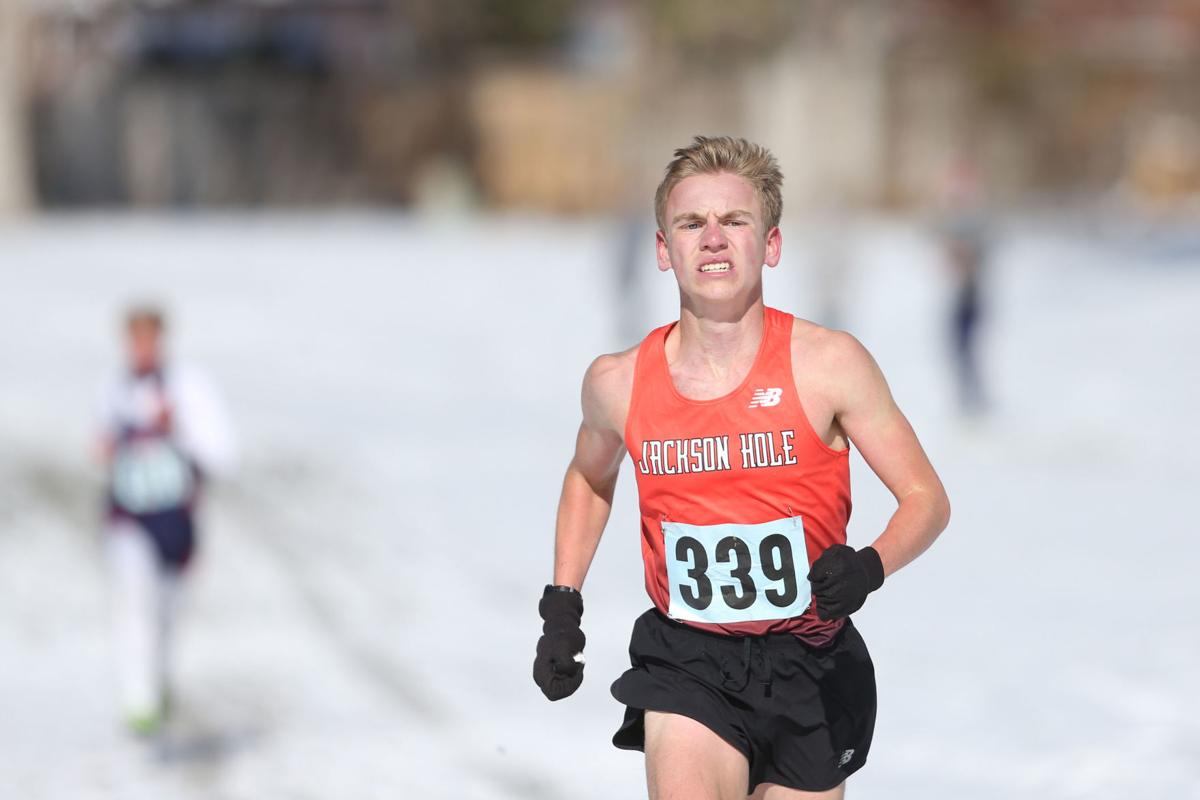 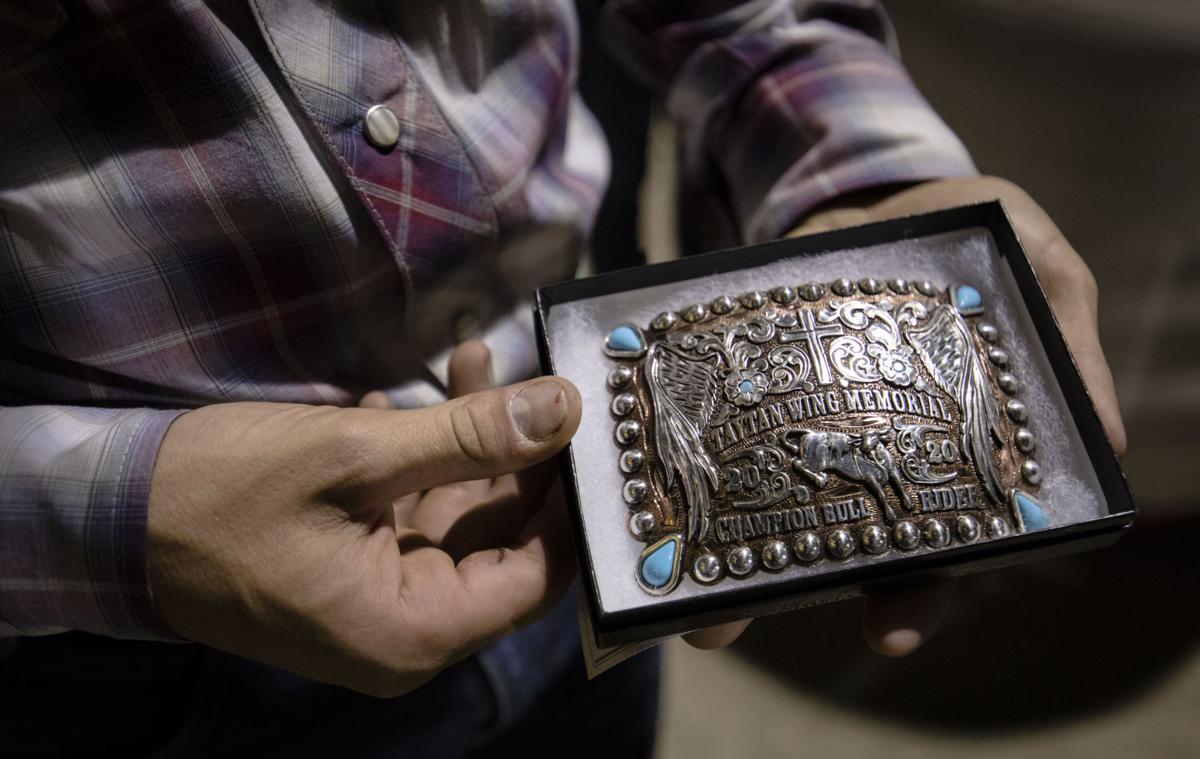 It was an odd year for everyone, inside the sporting world and out.

The coronavirus and its implications could have filled the entirety of our sports year in review, but so much happened in Teton County outside that framework that will forever be tied to the year 2020.

There were state champions before and after the onset of the virus, there were tragic deaths and moments of redemption.

The following list makes up some of our favorites, from heart-wrenching stories to the most impactful.

The only thing keeping this from landing higher on this list is that Jackson Hole High School’s dominance in Nordic and alpine skiing is an expectation at this point.

The Broncs boys and girls alpine squads hosted the state championships at Jackson Hole Mountain Resort, and both came away with titles.

The boys side won the program’s ninth straight, with Nicholas Janssen winning the giant slalom title, leading five Broncs on the All-State list.

The girls, meanwhile, scored the program’s 11th straight state championship in just about as dominant an effort as one could hope for. Sophia Morgan won the giant slalom state championship and shared the slalom crown with teammate Sidney Nash. Five Broncs made the All-State list.

Not to be outdone, the Broncs Nordic teams swept the state as well. The girls side edged Lander for the program’s ninth straight title, and the boys won in dominant fashion for their 10th state title in 11 years.

Much of the discussion surrounding sports and athletics this year has been simply whether those competitions should go on while the coronavirus pandemic looms.

LoToJa, the annual cycling race beginning in Logan, Utah, and finishing in Jackson Hole, was no exception.

When the race announced its plans to forge ahead, reactions were split. Trevor Robinson, the top local from 2019, argued against it. Defending champion Roger Arnell, of Utah, was happy it was going on for the 38th time, seeing it as a return to normal.

In the end the race did go ahead but with a downtick in participation and a slew of COVID-19 protocols.

As the lead pack came into sight from the finish line it was Utah’s Cameron Hoffman eking out the victory, just one-tenth of a second ahead of second place. Hoffman’s 2020 victory was his fifth, but it was his first since winning in 2014.

Lindsey Stevenson, also of Utah, took the women’s Category 1/2/3 championship on paper, but her result wasn’t quite so satisfying. Amy Heaton, a Category 4/5 racer, finished with the fastest time overall.

Story: LoToJa to go on with COVID-19 precautions

Oh what a year it was for football in Jackson.

The 2020 campaign was a story of redemption for the Broncs. In September, Jackson took down bitter rival and defending state champion Star Valley for the first time since 2015.

And while Jackson was sailing through the regular season as the team to beat in 3A football, Cody came to town in the final week of the season and blew the Broncs out to claim the state playoffs’ top seed. The Broncs rebounded, beating Riverton in the state quarterfinals and Douglas in the state semifinals to earn the program’s first state championship berth since winning it all in 2007.

And of course, it was Cody waiting for the Jackson Broncs in the state title game.

The BroncBowl, as this newspaper affectionately dubbed it, wasn’t quite the drubbing of Jackson that the regular season meeting was, but it still showed Cody was the top team. Those Broncs beat these Broncs 34-13 to keep head coach David Joyce searching for his first state championship since taking over the program in 2017.

Lina Streeper, the musher out of British Columbia’s Streeper Kennels had made light work of the Pedigree Stage Stop dog sled race that finishes in Teton County. And then, in 2019, she took a wrong turn and Quebec’s Anny Malo clipped her for the title.

The two returned in 2020, Malo setting her eyes on a repeat and Streeper looking to rewrite the 2019 fluke.

This time there were no wrong turns and no big mistakes. Malo and her dog team were simply the best.

Over the seven-stage race, Malo won six of them, including the final leg, which wraps up near Lower Slide Lake.

Her cumulative winning time of 15 hours, 55 minutes and 11 seconds dusted the rest of the field, with Streeper finishing second in 16:08:34.

“Last year I didn’t win, but it wasn’t because we weren’t ready to win,” Streeper said afterward. “This year I got beat. She had a really strong team. I had good runs, and she had better runs.”

Victor, Idaho’s Rob Kincaid died in the Palisades area of Idaho in April after he went missing while out riding with friends and family.

Kincaid was a veteran of local snowmobile hill climbs, including the World Championship Snowmobile Hill Climb at Snow King Mountain, and a regular in races across the West with the Rocky Mountain States HillClimb Association. In 2015, he competed at the X Games in Aspen, Colorado, finishing 16th in the snowmobile HillCross.

The Bonneville County Sheriff’s Department said Kincaid was wearing a beacon at the time of the avalanche, but it wasn’t turned on. Kincaid was known in the snowmobile community for his ardent advocacy of backcountry safety, often publishing social media videos stressing the importance of preparation when venturing out.

The 2020 cross-country season was all Jackson Hole High School, culminating with a clean sweep of 4A state titles in October.

The Jackson girls captured their seventh state championship in program history in Casper, scoring 45 points to cruise past second-place Natrona’s 74.

On the boys side, Jackson rebounded from a hotly contested team race during regular season competition.

Senior Ben Williams led the team with an individual state championship, and the Broncs notched their sixth state title in program history.

Head coach Jeff Brazil was selected as the 4A Coach of the Year for both boys and girls cross-country.

Story: Williams wins at the front, Goralski comes through from the back

From 1967 to 1995, William “Bill” T. McIntosh was as involved in high school athletics in Jackson as anyone could be.

The longtime football and basketball coach and athletic director retired from the school in the mid-’90s and moved with his family to Texas, where he rounded out his storied life in Friendswood.

In April, McIntosh died after a 10-year battle with multiple sclerosis. His wife, Rosemary, said he died of complications from the disease at 83.

McIntosh’s tenure in Jackson began as a vocational tech teacher and football coach, and after six years in Teton County he became the school’s athletic director.

He filled in as the girls basketball head coach from 1990 to 1992, winning a state championship along the way. He was also elected to the Wyoming Coaches Hall of Fame, a designation he accepted humbly.

His legacy in Jackson is cemented with each blade of artificial grass on Jackson’s football field, as the stadium bears the name “William T. McIntosh Stadium.”

Though Taytan Wing was not of Jackson, his legacy will carry on here each summer as the Jackson Hole Rodeo takes over the fairgrounds.

The Big Piney bull rider died in April, just short of his 17th birthday. His family, seeking a final send-off for Wing, brought his chaps to an August rodeo, strapped them to the back of a bull and celebrated each turn and buck as those chaps clung to the bull all eight seconds.

The rodeo culminated with a special buckle awarded to that night’s winner in bull riding, along with another $500 on top of that winner’s earnings.

The expectation is for the Taytan Wing Memorial buckle to return to the rodeo each summer, bringing a piece of Wing back to where he learned the sport he most loved.

Story: A plume of dust, eight seconds made for late Big Piney cowboy

While the world tried to figure out what life in a pandemic meant back in March, high school sports were no exception.

The start of spring sports in Wyoming was pushed back by the Wyoming High School Activities Association first until March 28 and then until April 6 before things were closed down for good in mid-April.

That meant Jackson’s soccer teams and track and field teams would be without their sport for 2020. The Jackson Hole Lacrosse Club shut down for the spring as well, although a number of games carried on in summer. The Jackson Post 43 Giants, unaffiliated with the state High School Activities Association, were able to pick up the season in May.

It was an especially bitter finish for the boys soccer team, which would have been returning as the defending 4A state champions. The canceled season denied the team the opportunity for a repeat title.

Senior Archer Caulkins, who won the title as a junior and lost out on his senior campaign, noted the lost season meant the loss of a senior season to rack up accolades, and highlights to send off to colleges. More than anything, though, it was a bitter finish to high school.

“That state championship and that whole run to the title was my highlight of my high school career,” he said. “It was so fun, it was so great to see everyone at that final game. … It’s just more sad than anything.”

1. And then came the virus

The second week of March was supposed to be the culmination of winter sports around the valley and the state, with a Joe Casey Cup on the line, the new-look Town Downhill set to go, and just about everything else that involves competition and cold weather on tap. And then on March 12, it all came to a halt.

That week set the stage for the sporting world in 2020 as athletics and competition had to find new ways to go on.