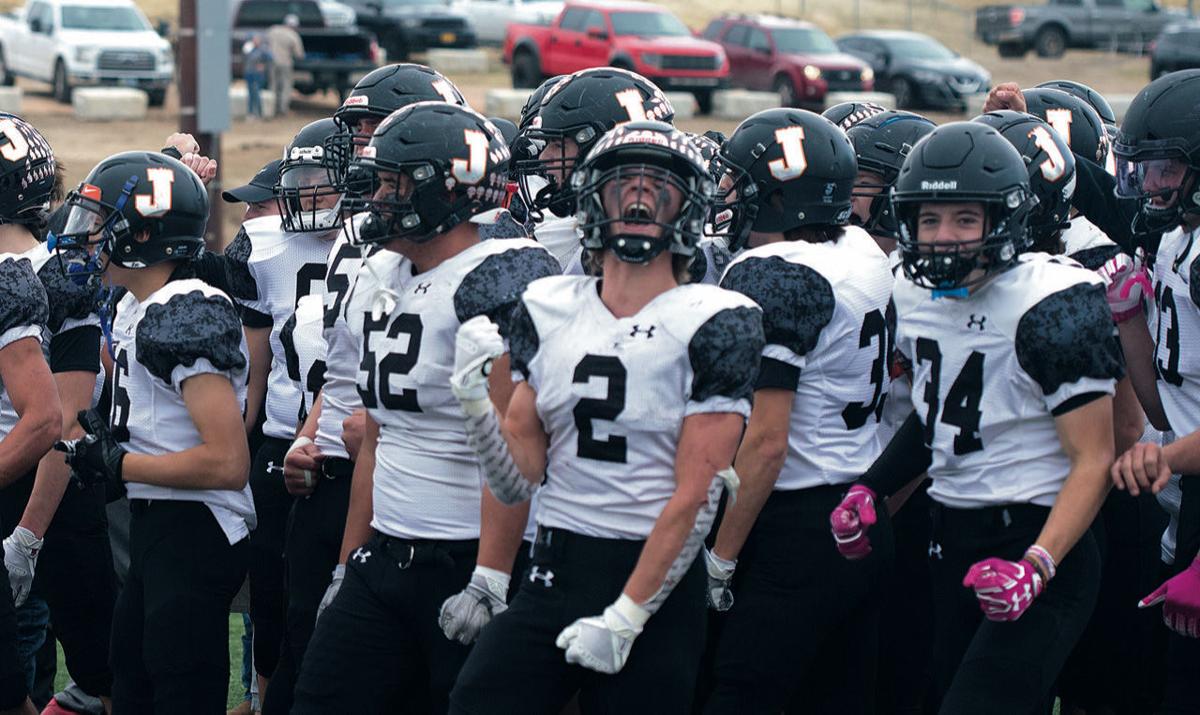 Jackson Hole running back Brody Hasenack celebrates after Jackson beat Douglas in the state semifinals on Friday. Hasenack scored the winning touchdown and finished with 124 yards on 37 carries. 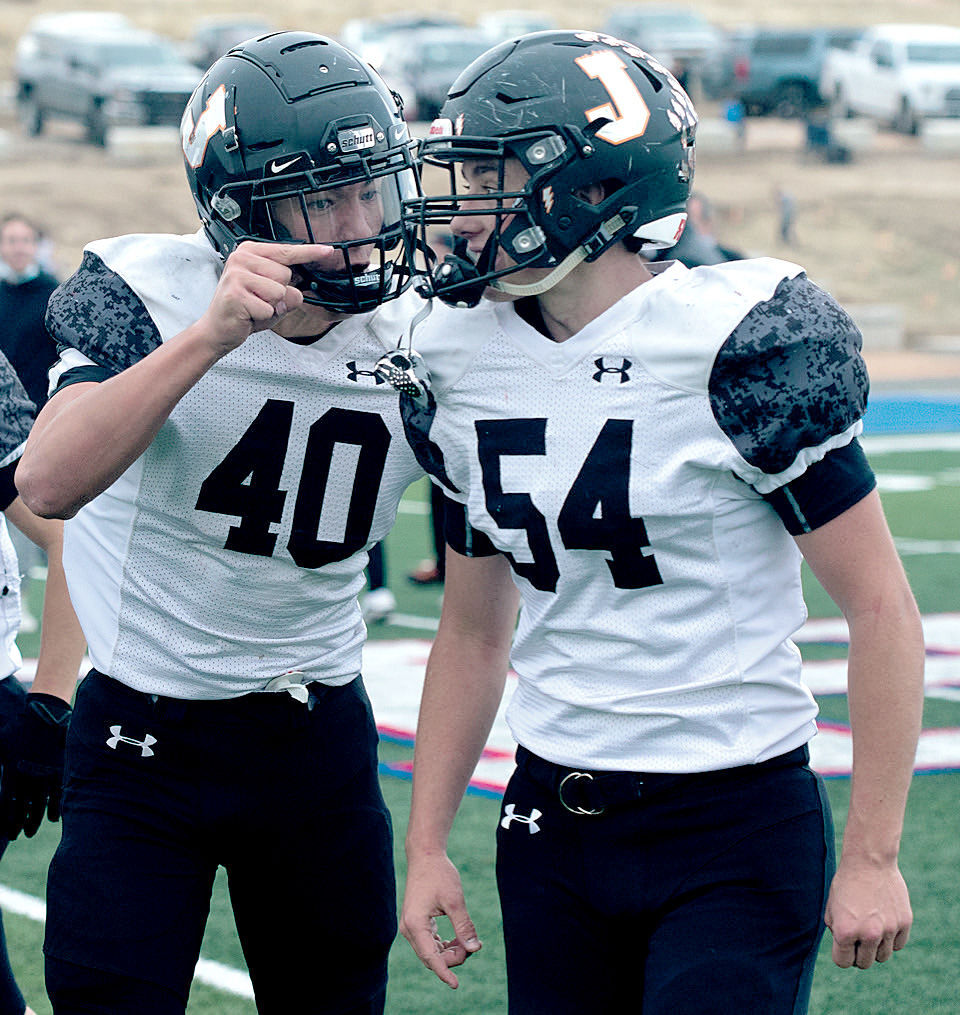 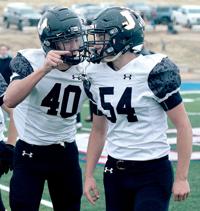 Jackson now moves to 9-2 on the season after handing Douglas (8-1) its first loss of the season.

Jackson’s Fort Crain Evensen breaks up a pass intended for a Douglas opponent during the Broncs’ 21-14 win over the Bearcats on Friday in Douglas. The Broncs go to Cody this weekend for the championship game.

Both defenses were as stiff as the Converse County winds on Saturday, a 14-14 deadlock keeping both the visiting Jackson Broncs and the home Douglas Bearcats from celebrating a trip to this week’s 3A football championship as the fourth quarter slipped away.

Midway through the final quarter, a Broncs field goal attempt missed, giving the Bearcats what could have been the final possession and a chance to drive the field, score and earn another week of football.

But the Broncs defense, somewhat overlooked all year as the offense has dabbled in flashes of brilliance, forced a three-and-out and gave its offense the ball back at the Douglas’ 35-yard line. A touch over four minutes remained, and just a score separated the Broncs from a return to the state championship since winning it in 2007.

With all that on the line, Jackson went to its roots.

Jackson came out in the double wing, choosing only to run the ball at the Bearcats time and time again. Running back Brody Hasenack carried the ball eight straight times, small chunks each carry as he and the offense worked down to the Bearcats’ 7. From there Hasenack’s wiry frame carried a couple would-be tacklers into the end zone, putting his side up 21-14 with 46 seconds to play. Once Douglas got the ball back, Jackson’s Sam Lopeman closed the game out with an interception on Bearcats quarterback Koby Case’s desperation heave.

Off to the state championship for these Broncs.

“Just four yards,” Hasenack said of his mindset before each carry. “Championships aren’t won off big plays, they’re won off grinding every single play. And coach always says if you get four yards every carry you’ll get a first down.”

Jackson’s offense since Joyce took over the program in 2017 has been defined by its tempo, a mad rush back to the line between each play to wear out and demoralize the opposing defense. It’s become the team’s identity in many ways, with opposing coaches making note of the style in preparation for the Broncs. But it’s not the foundation, Joyce said. The foundation is line up, run it down your throat for those four yards and then do it again.

“Our offense has branched out from the double wing, you’ve got to go back to your roots when it’s do or die,” he said. “We are a hurry up, up-tempo team, but that expanded from the double wing. The boys went back to their roots and closed the game out.”

Despite a prevailing narrative around the state that all of the 3A contenders resided on the west side of the state, Douglas played the Broncs evenly from the onset a week removed from downing defending state champion Star Valley in the quarterfinals. The Bearcats went down the field on their opening possession, scoring on a 42-yard pass play from Case to Rylan Wehr on their way to 7-0.

Jackson responded immediately, with fullback Henry Hershock catching a pass over the middle from Sadler Smith and going 35 yards to tie the game at 7-all.

From there both defenses locked down until reaching halftime, when the tone seemingly reset.

Jackson took the ball out of halftime and scored, as Smith found Colter Dawson for a 33-yard score to put the Broncs up a touchdown.

Nearing the end of the third quarter, Wehr again hauled in a touchdown pass for Douglas to even the game at 14, as both sides exhausted their options over the fourth quarter trying to break through.

It looked like Jackson had the tie-breaking score immediately after, as Lopeman took the ensuing kick off the length of the field for a score. But a penalty brought the ball back to Jackson’s own 12, in a game in which the sides split 19 yellow flags across the game.

“I don’t think our kids played as well as they can today, because I think we are definitely good enough to beat them,” Douglas coach Jay Rhoades said. “But my hat goes off to them, on this particular day they were the better team at the end of the day.”

Jackson moved to 9-2 on the season after handing Douglas (8-1) its first loss of the season.

The semifinal victory sets up a meeting between the Jackson Broncs and the Cody Broncs for the title game this week, with Cody hosting after earning the West’s No. 1 seed by dispatching Jackson in the final week of the regular season.