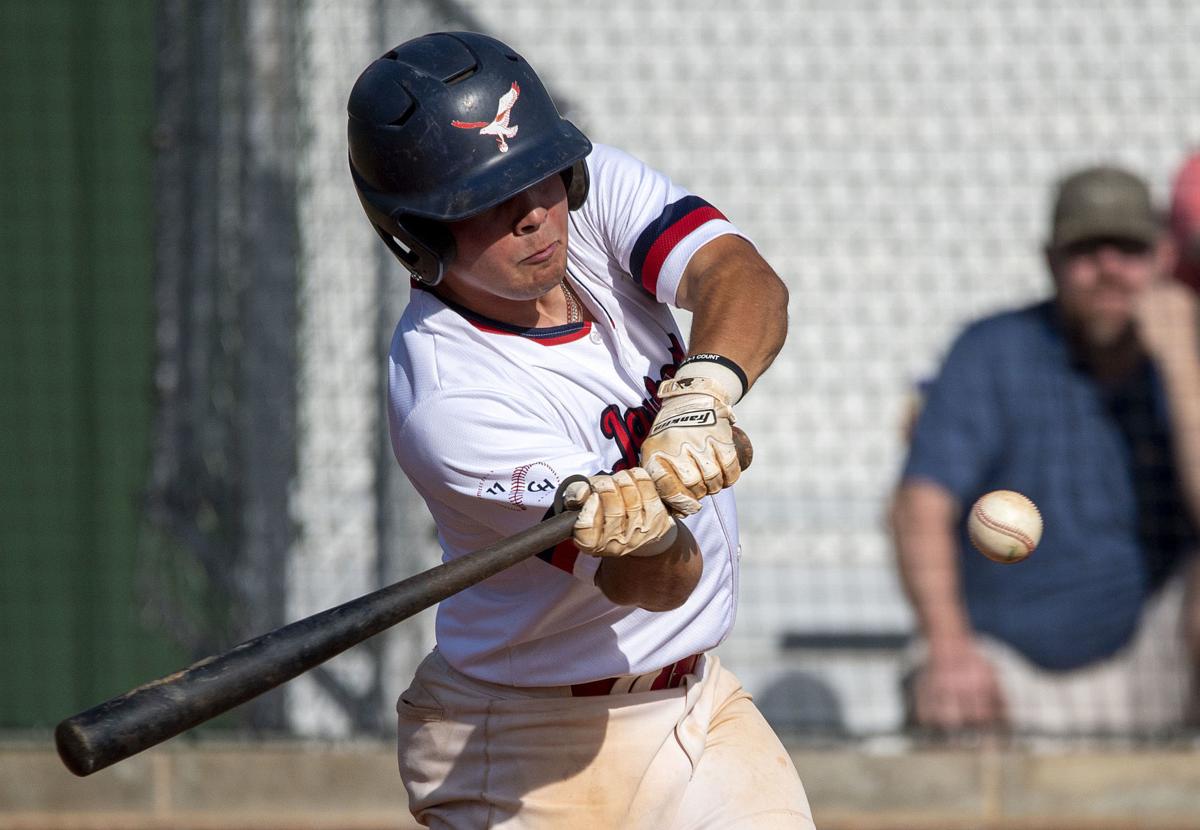 Jackson’s Parker Bleggi connects against Rock Springs during the first inning Friday at Giants Stadium. The team split their games against their conference rivals, droping Friday’s game 10-3 but winning Saturday 17-13.

Jackson pitcher Mason Wright delivers in the first inning of the Giants’ game against Rock Springs on Friday evening. 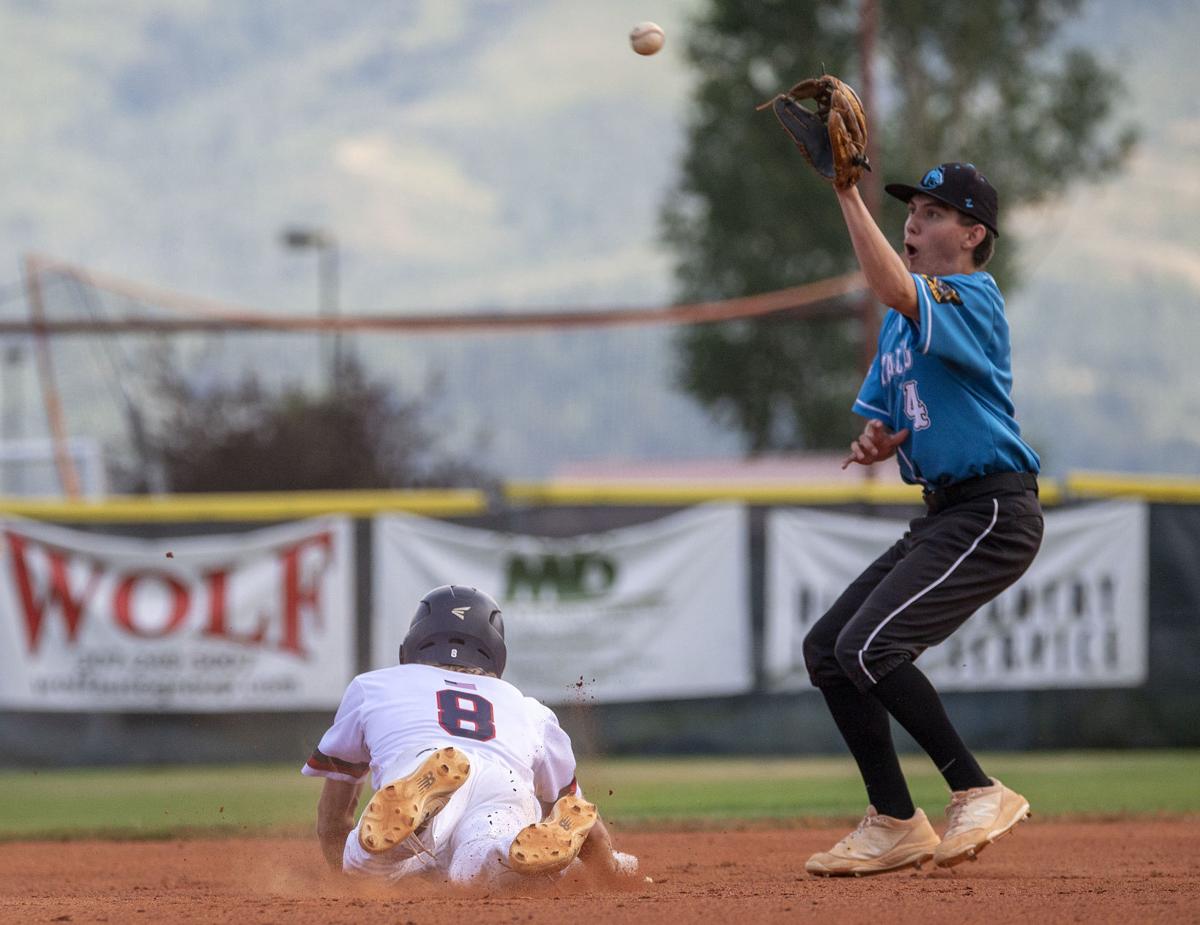 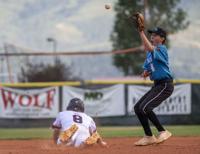 Jackson baserunner Matt Fisher steals second during the Giants’ 10-3 loss Friday against Rock Springs. The team rebounded to win 17-13 on Saturday and split their Monday games with Evenston.

With the state tournament in Laramie quickly approaching, the young Post 43 Jackson Giants are playing some of their best baseball of the season.

The Giants are 4-2 in their last six games, and are getting set to put a bow on their regular season slate with a trip to play Rock Springs on the road, a team they have had success against this summer.

Coming off of a series of tough losses up in Cody earlier in July, the Giants began their final homestand with a clean slate, and quickly got the end of their regular season back on track.

Kicking off last week with a Tuesday afternoon doubleheader split with Evanston, the Giants followed it up with a series win over the aforementioned Rock Springs.

Even with difficulties on the mound in the rubber match game three, the Giants offense flourished, collecting 12-hits to fuel the offense and provide enough run support to win the game, and the series.

Like many young baseball clubs, many of the errors the Giants commit defensively are mental, and are likely to be shored up with experience playing as a team at the AA level. The progression has shown, and the team has noticed this throughout the season.

“I think we hit the ball pretty well [against Rock Springs],” said Matthew Fisher, the left fielder for the Giants with three years of eligibility remaining. “We had solid defense, in my opinion at least. We made a few errors but we’ve cleaned it up compared to earlier in the season, for sure.”

Fisher said that these games will be helpful to the team in the coming seasons, as the team is able to not take things too seriously, while focusing on practicing their fundamentals.

“It’ll be super helpful,” Fisher said. “We’re all sophomores and juniors for the most part. In the next couple of years we should be super good and we’ll be a good team, I think.”

The left fielder went 3-for-3 in last Friday’s opener against Rock Springs and 3-for-4 in Saturday’s finale, on his way to being given the team hammer on Saturday, an award given to the most productive hitter of the day.

In Monday afternoon’s doubleheader against Evanston, the Giants split a series in what would be their final pair of home games on the season.

Even with the afternoon split, the starting pitching in both games was phenomenal, and gave fans a chance to get a taste of the potential that this group has moving forward in the coming seasons.

Kade Foulke fired six gutsy innings on the mound, a bright spot in game one, despite being handed the loss.

Pitching has been an issue in many of the Giants’ losses, and Foulke provided a spark on the mound for head coach Jason Huggins to lean on. Foulke pitched deliberately, attacking the zone, and put the Giants in a position to win the game late.

Foulke ran out of gas late in the game, and Evanston took advantage of it with three runs in the seventh to take control of game one.

Leading Evanston for six innings, the Giants offense struggled to find any offense aside from the two-run first inning to kickstart the game, and were handed the loss because of it.

With a quick turnaround, the Giants rallied to win in the afternoon’s second game 3-2, and pick up an important win ahead of their games on the road at Rock Springs.

Steven Ashurts went the distance, allowing five scattered hits over his seven innings pitched, while striking out seven on his way to earning the win.

In what has been a season of ups and downs for the Giants, head coach Jason Huggins explained that the record that rests beside the team’s name in the standings is not nearly indicative of the progression that the team has made this summer.

“We’re way more than wins and losses,” said Jason Huggins, the head coach of the Giants. “We want to see those guys getting better and we’ve seen that. These guys have improved a ton from March until now, and to me that’s a successful season. A successful season is not [based] on wins and losses. We don’t base our kids on that, they’re nice, but we want to see our kids develop and we work and grind everyday to make sure that happens.”

With plenty of youth on the team, the Giants have the opportunity to grow their game together, practicing fundamentals and building camaraderie before the results ultimately come in the next few seasons.

Huggins explained that each player will receive between 100 and 150 plate appearances this season against really good competition, which will help them tremendously down the road. The Giants have had some really experienced teams in the past and aside from a couple players, many of the players will be on the team for the next three to four years.

With three final regular season games against Rock Springs to conclude the schedule, the team has an opportunity to get some important final game reps before heading into the postseason.

Held in Laramie at the University of Wyoming’s Cowboy Field, the Giants are expected to play their first state tournament game on Monday, July 26, with the time and opponent still to be determined.

Despite being underdogs in the state tournament, everything will be decided within the lines, giving the Giants an opportunity to make some noise, win some games and most importantly get some experience playing on a big stage.