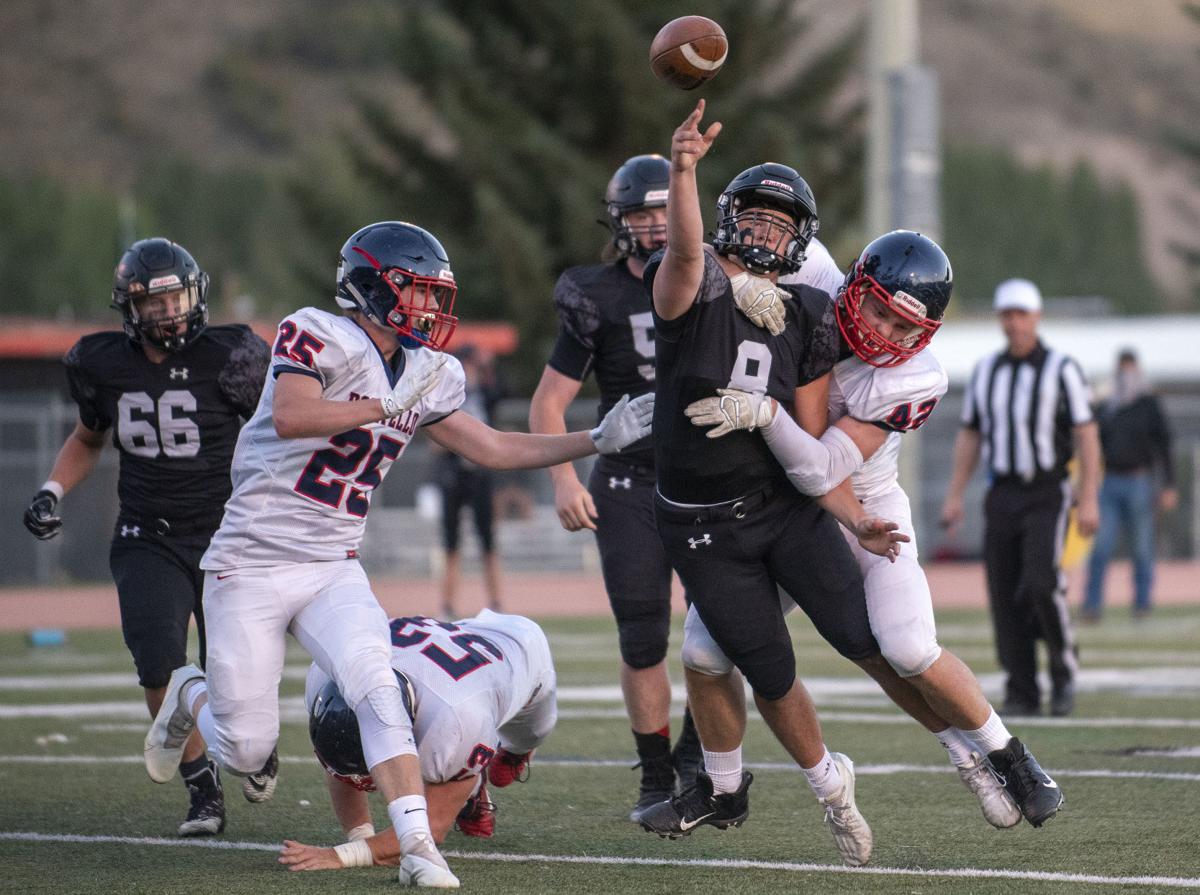 Broncs quarterback Sadler Smith gets rid of the ball before being brought down by the Pocatello defense during the second quarter of Jackson’s 30-14 loss Friday night. 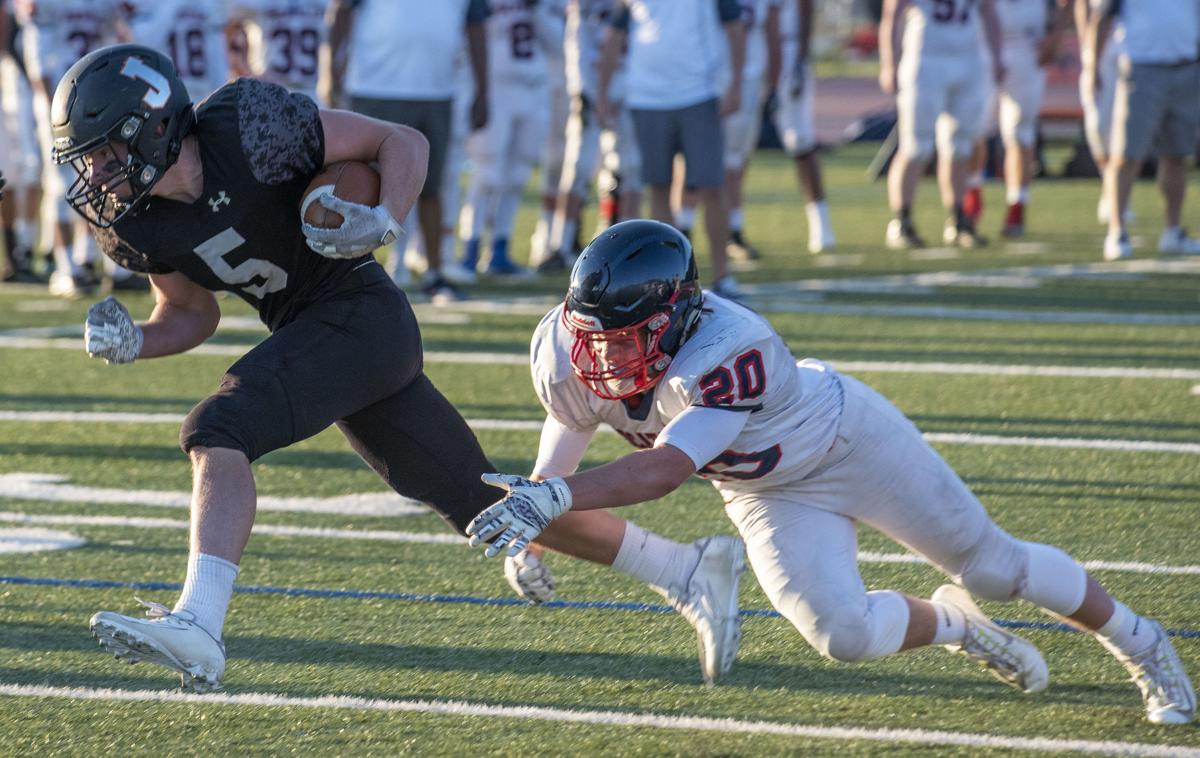 Jackson running back Clancy Meagher slips through the tackle of Pocatello, Idaho’s Kade Cooper for a Broncs touchdown in the opening quarter Friday night. 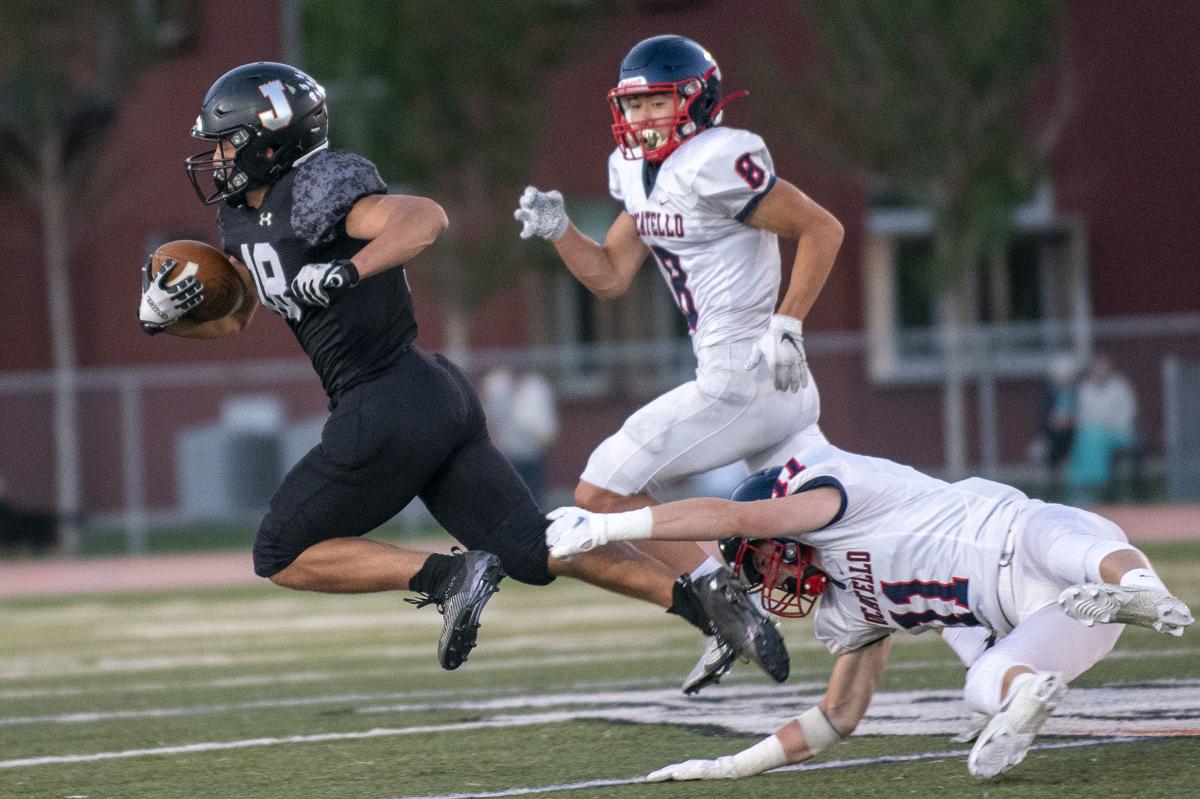 Jackson’s Sam Scott is tripped up from scoring in the second quarter of the Broncs’ 30-14 loss to Pocatello. The Broncs are on the road this week and will face Star Valley at home on Sept. 25.

Broncs quarterback Sadler Smith gets rid of the ball before being brought down by the Pocatello defense during the second quarter of Jackson’s 30-14 loss Friday night.

Jackson running back Clancy Meagher slips through the tackle of Pocatello, Idaho’s Kade Cooper for a Broncs touchdown in the opening quarter Friday night.

Jackson’s Sam Scott is tripped up from scoring in the second quarter of the Broncs’ 30-14 loss to Pocatello. The Broncs are on the road this week and will face Star Valley at home on Sept. 25.

With a touch under six minutes to play Friday night, the Broncs trailed Pocatello (Idaho) by two touchdowns and were looking down 90 yards of field to have a chance at cutting that deficit in half.

Jackson worked its way out to its own 33-yard line before coming face to face with a fourth-and-18. A ball over the middle from quarterback Sadler Smith was intended for Colter Dawson but wedged neatly into the hands of the Pocatello defensive back for a pick.

From there Pocatello tacked on another three points with a 47-yard field goal, and the clock expired at William T. McIntosh Stadium with a 30-14 win for Pocatello and a trove of dropped passes and missed chances for the Broncs.

“We had a few shots in the second half where we had a stop, had a guy deep over the middle and we throw a pick,” Jackson coach David Joyce said. “Those things, if [we] just don’t make those mistakes we fight our way back into the game.”

Jackson was in the chase position as a result of Pocatello quarterback Zach Park mincing the defense with a luxurious combination of speed, arm strength, and an ability to slip through tackles like a greased pig.

After Clancy Meagher scored for Jackson to open the first quarter, Park connected on touchdown passes of 12 yards and three yards to have Pocatello up 14-7. In the second quarter, after a bad snap made for a third-and-goal from the 38, Park laid a beautiful ball over the top to receiver Krue Hales for a third score. Just before the half, Park evaded what looked like all of Jackson’s defense before lofting a ball into the end zone for a wide-open touchdown, giving his side a 27-7 advantage at the half.

“I was really pleased with the fast start, that’s one thing we stressed all week,” Pocatello coach Dave Spillett said. “Apparently I should have stressed finishing as well, because I did not enjoy the second half as much.”

Indeed, the Jackson defense returned to the field with life following the break. Each of Pocatello’s first three drives ended with punts, twice by way of timely sacks from William Pew and Henry Berezay.

That script flip did not carry over to the offensive side of the ball for Jackson, however. The Broncs turned the ball over twice to start the second half before finally returning to the scoreboard with a one-yard touchdown run from Meagher with just over a minute to spare in the third quarter. It gave the Broncs hope in the fourth quarter, hope that quickly sunk with every missed opportunity.

“At some point I’m going to have to stop challenging the guys to wake up and play a full football game,” Joyce said. “In the second half it seemed they started to dial it in a little bit better, but if we’re going to beat good football teams we can’t take a whole half to do that.”

The loss drops 3A No. 1 Jackson to 2-1 on the season with a road trip to Riverton on tap next Friday.

Across the 3A West, Powell moved to 3-0 on the season to move to the top of the standings. Cody remains 2-0. Star Valley, last year’s defending state champion, now sits 0-3 on the year.