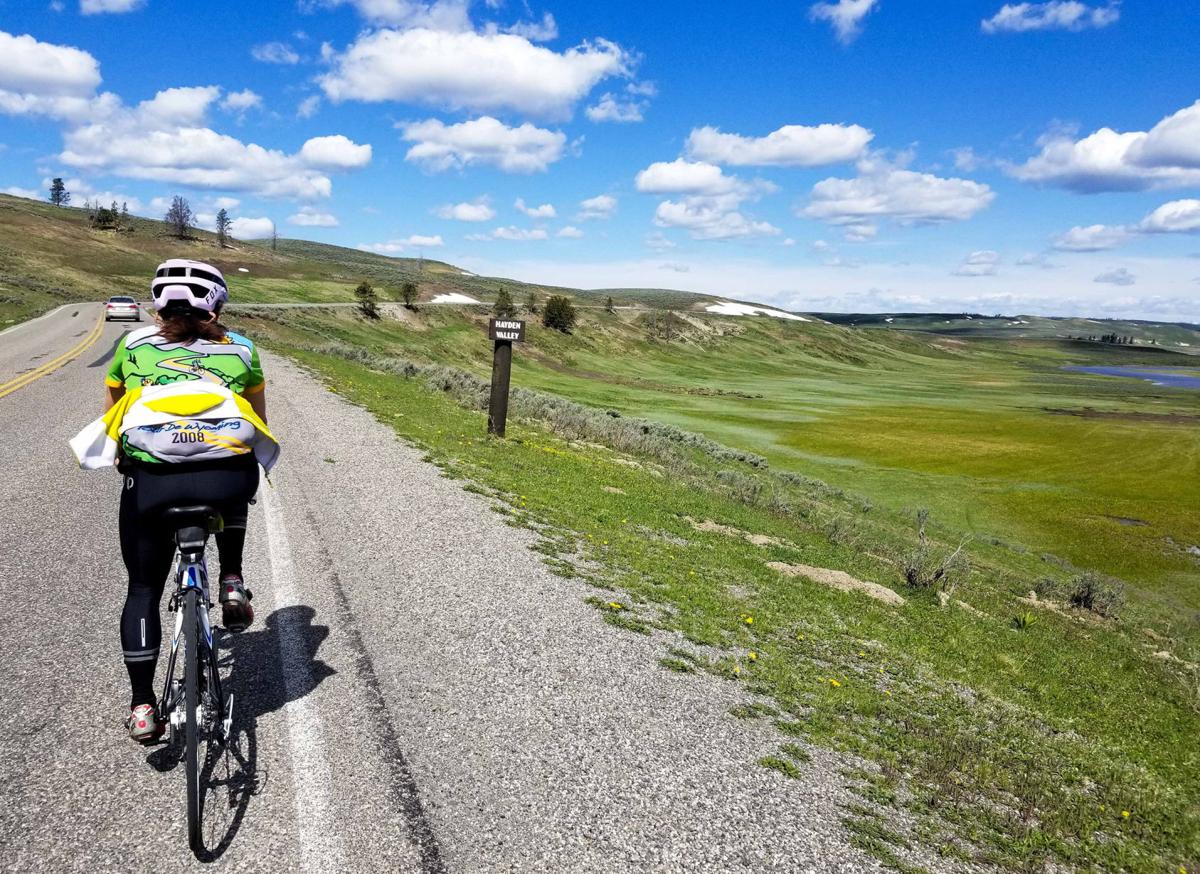 If you start and end a ride of Yellowstone’s Lower Loop at Grant Village it is exactly 100 miles. The route passes through Hayden Valley, where it’s likely you’ll spot bison and maybe wolves. 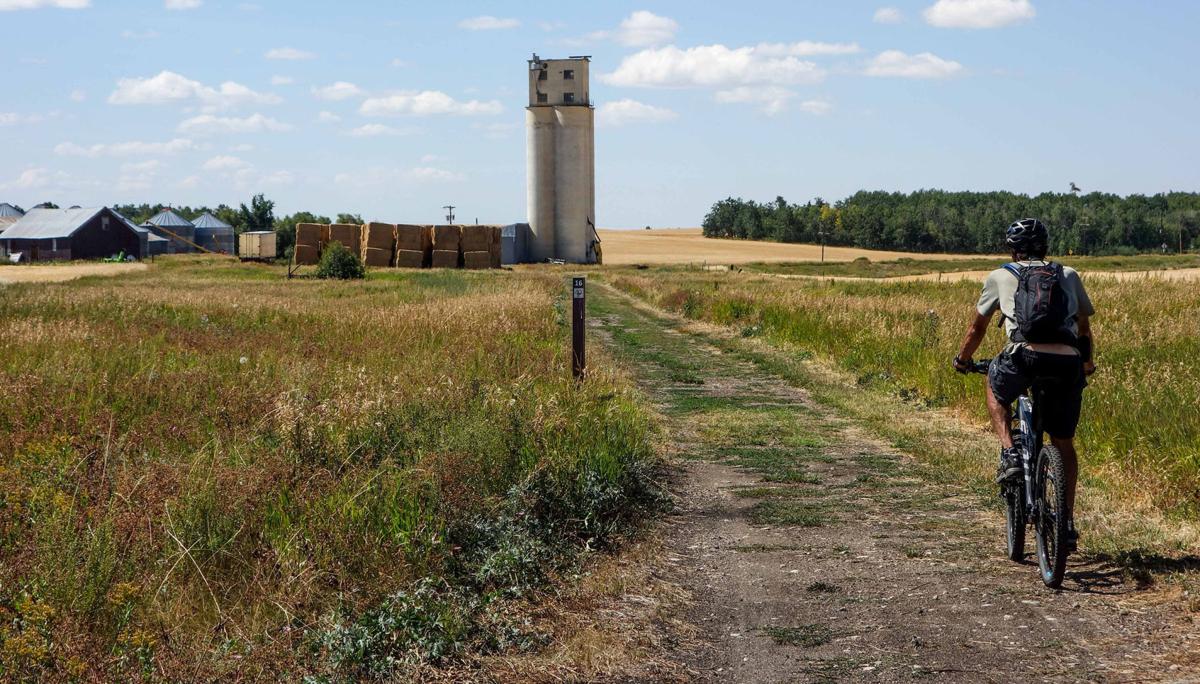 The Ashton-Tetonia Rail Trail is a mellow ride in Teton Valley, Idaho, that can be as short as you’d like, or you can ride the trail out and back to get in 60 miles.

If you start and end a ride of Yellowstone’s Lower Loop at Grant Village it is exactly 100 miles. The route passes through Hayden Valley, where it’s likely you’ll spot bison and maybe wolves.

The Ashton-Tetonia Rail Trail is a mellow ride in Teton Valley, Idaho, that can be as short as you’d like, or you can ride the trail out and back to get in 60 miles.

A confession: Having received my second vaccination enough weeks ago that I’m now as protected as it can make me, and with April 17 being the 77th birthday of my mom, who lives in Maryland and who I haven’t seen since December 2019, I’m typing this column sitting at a table on the patio at Ivory Road Cafe in Arden, North Carolina. I’ll head up to Maryland the morning of April 17 with the plan of surprising my mom (and dad) at a birthday dinner a neighbor is hosting for her.

Because a dear friend and her dear daughter who I hadn’t seen since June 2019 live in Arden, a town just south of Asheville, I figured I’d hang with them for a while before traveling to Maryland. Because once you’ve driven from Wyoming to the East Coast, everything seems pretty close. And also I’m dying to see loved ones after so many months of not seeing them. The fact that paved and gravel roads in the Asheville area are snow-free and that April temperatures are in the 60s and 70s is icing on the cake.

I’m not going to write about road rides in Asheville, although if you’re here you should check in with a local bike shop for some beta; the riding is nice, albeit always with car traffic. Pedaling around the area has me thinking about the rides at the top of my list once I get back to Jackson Hole.

Last month in this column I shared Jackson Hole hikes I was looking forward to doing this summer. This month I’m sharing the bike rides that are on “The Epic Summer Adventures Dina Will Have in 2021” list. They’re a mix of gravel and road rides.

There’s nothing hard-core about the 30-mile Ashton-Tetonia Rail Trail in Teton Valley, Idaho. The fact that it follows a former railroad route, the Oregon Short Line Railroad, means it has little elevation gain. There are no technical sections. It is just easy riding with few people and expansive views of the Tetons and Idaho farmland. The two ends of the trail are in Tetonia and Ashton. In between there are multiple trailheads for those who don’t want to do the 60-mile round-trip ride. Starting from Felt or Ashton, you can ride on the rail trail to a historic trestle bridge. From Ashton it’s 7 miles to the Conant Creek Trestle Bridge, a 780-foot bridge hanging 130 feet above Conant Creek that’s listed on the National Register of Historic Places.

If you start in Tetonia it’s 10 miles to the Bitch Creek Trestle. Start at Judkins (near the intersection of Reece Road and W. 14250N) and it’s only 2 miles to the trestle bridge. One-hundred thirty-five feet above Bitch Creek, this bridge was built in 1923 (but railings were only added in the 2000s).

Make this ride more difficult by turning off the rail trail and onto Pinochle Road (also known as Forest Road 266) just south of Judkins. Pinochle climbs and then descends about 1,800 feet over 25 miles. At its northern end you can rejoin the Ashton-Tetonia Rail Trail and either loop back to your car or continue on to Ashton. If you do the entire rail trail with the Jackpine-Pinochle horseshoe it’s about 80 miles round trip.

On a drive up Forest Service Road 30415, which climbs the almost 2,000 feet up to Gunsight Pass, in a Razor, I promised myself I’d go back and do it on a bike. Road 30415 is just north of the Goosewing Ranch, which is about 24 miles up the Gros Ventre Road from Kelly. From the start of Road 30415 it’s about 7 miles up to Gunsight Pass. This ride is a pick-your-own-distance. Start in Jackson and it will be about 100 miles round trip. When I do it I think I’ll start somewhere around the Atherton Creek Campground off the Gros Ventre Road. This would make it a little less than 50 miles round trip. Road 30415 is much smaller and rougher than the Gros Ventre Road but doable on a gravel bike. I’ll use 48mm tires.

I don’t recommend doing this ride between mid-June and mid-September because of the number of vehicles on this road. Thankfully, I’ll be returning to Jackson a couple of weeks before Yellowstone’s tourist season gets into full swing. I often make this ride my first century of the season. Parking at Grant Village, the loop is exactly 100 miles. You can ride either clockwise or counterclockwise. Because I like to end with the descent of Craig Pass, I have always ridden it counterclockwise. (Note that riding in this direction means you begin the 2,000-vertical-foot climb up Craig Pass at about mile 80; if you go clockwise, you start the climb up Craig Pass with fresh legs.)

The landscape between Grant Village and Fishing Bridge isn’t spectacular. For most of these miles the road winds through forest and around the shore of Yellowstone Lake. After Fishing Bridge you enter Hayden Valley, which, with the Lamar Valley in the northern part of Yellowstone, is the park’s best wildlife watching spot. It’s likely you’ll have to stop for bison crossing the road here. On the west side of the loop the highway winds alongside the Gibbon and Madison Rivers. Near the top of Craig Pass, which is on the Continental Divide, stop to check out Isa Lake, one of the few lakes in the world that drains into two oceans.

Dina Mishev writes the Excursion column every month. Contact her via columnists@jhnewsandguide.com.

Where: Around Greater Yellowstone Ecosystem