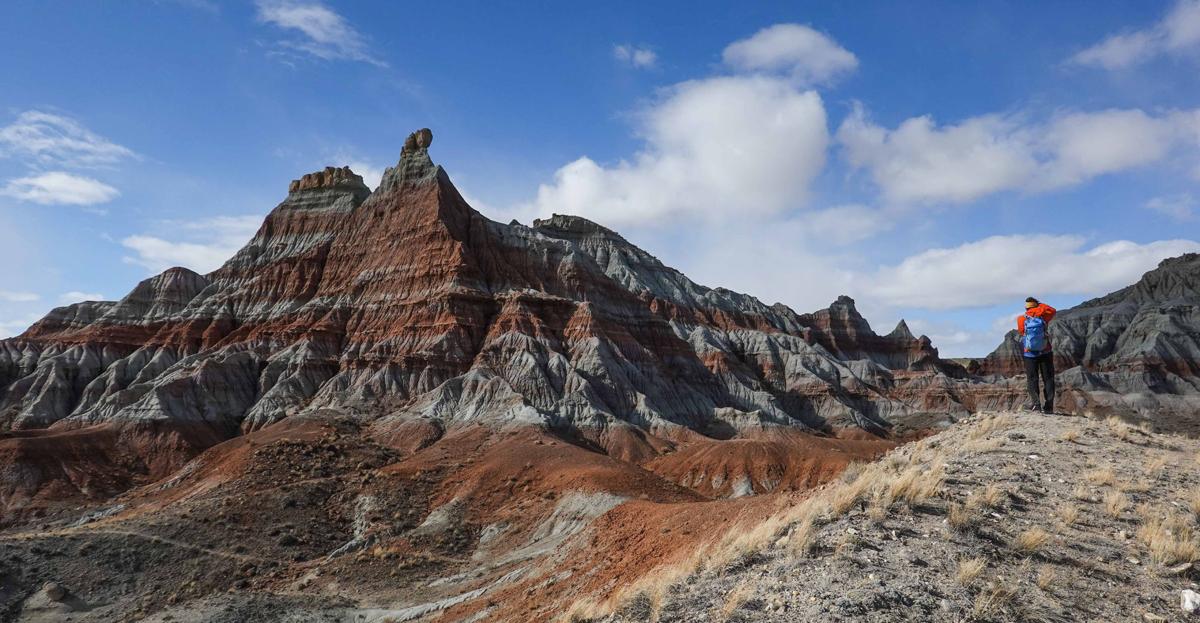 Derek Stal takes a photo of the eroded rock formation in the Dubois Badlands that the columnist calls “The Anvil.”

It’s as if the Lander Field Office of the Bureau of Land Management wants to discourage people from visiting the Dubois Badlands, a 4,520-acre wilderness study area just east of downtown Dubois that it administers.

This is what the BLM’s website has to say about the Dubois Badlands:

“Opportunities for primitive and unconfined recreation in the Dubois Badlands WSA are limited and lack outstanding characteristics. Day hiking would be possible, but the WSA’s size and lack of water limits its attraction for extended backpacking. While some primitive recreation activities are clearly possible in the WSA, the limited number and scope of such activities result in less than outstanding opportunities for primitive and unconfined recreation.”

The website does throw the Badlands a small bone in the paragraph that immediately follows:

If my boyfriend, Derek Stal, and I had judged the Badlands by the BLM’s descriptions, we might not have made the trip over to Dubois to explore them this spring when Grand Teton National Park was closed because of COVID-19. Instead of reading about them on the BLM’s website though, we looked at topographical maps of the area and Google Earth imagery.

Also, we had been noticing them for years from high points on hikes in the Fitzpatrick Wilderness in the Wind River Range to the south of Dubois. From the Winds I had looked north so many times and marveled at the juxtaposition of where I stood with what I could see. Where the Fitzpatrick Wilderness has wildflowers and greenery and waterfalls and solidly hefty mountains, looking at the Badlands I saw 33 shades of tan, 27 shades of gray, and stratified rock formations that looked so fragile it was a marvel they didn’t collapse before my eyes. From across the valley, the Badlands looked like a piece of Bryce Canyon National Park lost in Wyoming.

Dubois has giant fiberglass sculptures of a trout and a black bear, and you have to walk through the nasal passages of a 15-foot-tall fiberglass bison skull to enter its laundromat, but Derek and I didn’t find a single sign indicating where the parking area/trailhead for the Badlands WSA was. Or even a sign indicating the existence of the Dubois Badlands.

Our topo maps gave us a general idea. After turning onto a dirt road that dead-ended at a private home, we flagged down a truck that looked local because of its thick coating of dust and asked for specifics. Initially the driver looked perplexed, as though we had asked him where the shopping mall was. But then his wife elbowed him.

“They mean Mason Draw,” she said.

After turning off U.S. Highway 26 onto Kingfisher Road, we had turned right a couple hundred yards before it looked like Kingfisher dead-ended. That right was wrong. Kingfisher did dead-end, but its dead end is the parking area for the Badlands.

Retracing our route and taking Kingfisher until its end, we were the only car in the parking lot. And by “parking lot” I mean parked along the side of the road.

Where the road ended, a trail headed off into the Badlands.

What the Badlands lack in size they make up for in intricacy. Erosion has created a maze of drainages and draws, broken by convoluted, crenellated outcrops of rock. From the end of Kingfisher Road the main trail heads up Mason Draw, which is wide and open enough that an aircraft carrier could pass through, no problem. Side trails shoot off and disappear into smaller drainages about every half-mile or so, but Derek and I ignored those. Within 10 minutes after we left the car, an anvil-shaped formation hulked on the horizon near what looked to be the back of Mason Draw. Having no plan, we decided the base of this rock would be our destination.

It was only about 2.5 miles to it, and the hiking was almost completely flat, but it took us nearly 90 minutes to get there. We stopped every several steps to take photos. From a distance and/or in the harsh light of the middle of the day, the Badlands might look colorless, but we were visiting in the late afternoon, that magic time of day when everything seems to glow from within. The 33 shades of tan and 27 shades of gray were transformed into reds, oranges, pinks, creams and golds. One rock layer even looked lavender to me.

Whenever I explore a new area, it becomes a longer adventure than planned because I’m a sucker for seeing what’s around the next corner and over the next hill. And the Dubois Badlands have so many hills and corners. At the base of the anvil, trails headed in three directions. So rather than start back to the car, Derek and I continued on. We chose the trail heading east because it went around a corner and climbed up a small hill and led to a vista that was definitely not lacking in outstanding characteristics.

While I disagree with the BLM’s assessment that the Dubois Badlands lack in outstanding characteristics, I agree with them that the area is not a great place for backpacking. There are no water sources in it and 4,520 acres is only about 7 square miles. So, when you come explore for the day, bring all the water you think you’ll need, and then a little more.

Dina is happy to be sharing excursions again, especially since she’s been doing so many local adventures lately. Contact her via columnists@jhnewsandguide.com.

Hiking in the Dubois Badlands

How far: It’s an out-and-back so spend an hour or a whole day.

Convenience: The hard part is the drive to Dubois from Jackson (about 80 miles) and finding the “trailhead.” Hiking starts and ends at the same place.