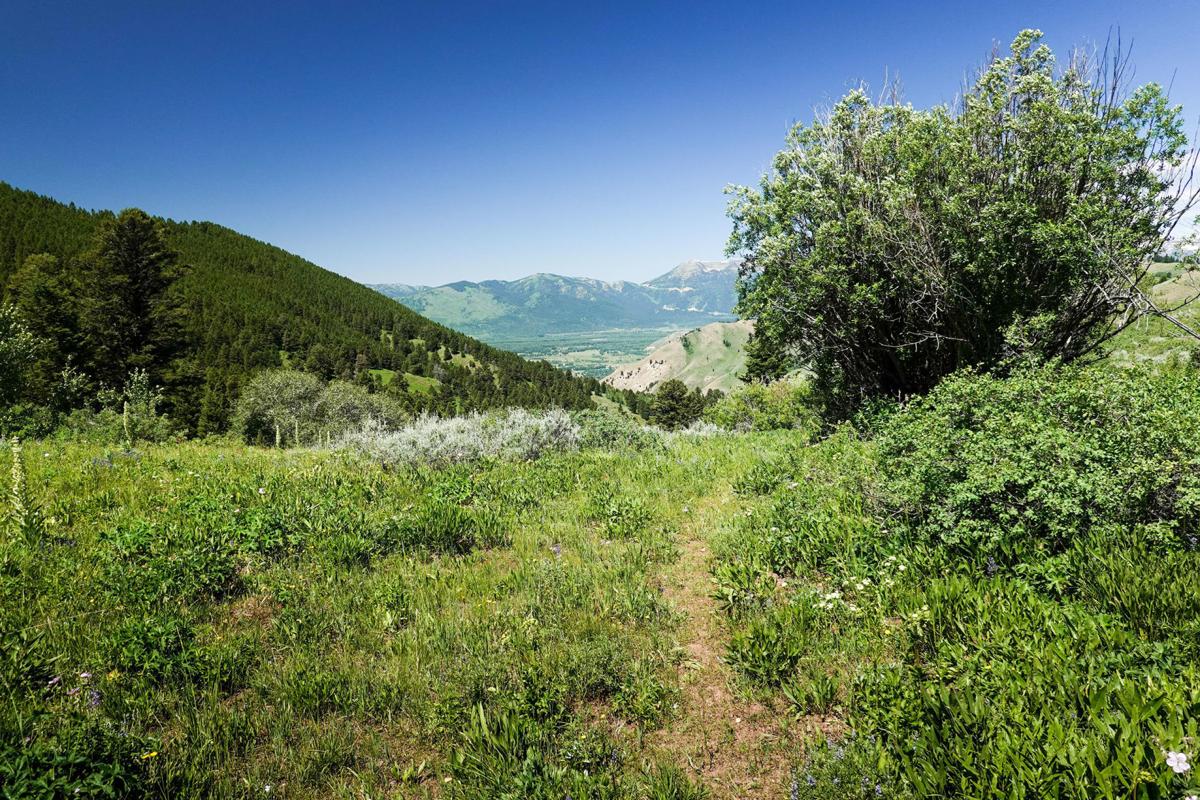 Hiking on the backside of Snow King is good for avoiding clogged trails, but flies kept this columnist moving when she slowed down to take photos.

This summer I’ve hiked the main trail up Snow King as early as 5 a.m. and as late as 10 p.m. and still seen other hikers. Last week, on a 6-mile loop hike that started and ended at the top of the scenic chairlift, I saw only two fellow trail users.

What changed? This loop wasn’t on Snow King’s front side, but its southern backside and western flank.

Usually I’d hike to the top of the King, but with work piling up, I availed myself of the scenic chairlift that climbs the 1,571 feet to Snow King’s summit. I knew the loop required me to hike up the mountain’s wild backside, so I’d still get plenty of climbing.

Disembarking the lift at the top, I headed southeast, but instead of going left and taking the service road back to mountain’s base, I went right. I was still on a service road, but this one climbed gently east before winding around the hillside beneath the array of radio towers on the east summit. After about a half mile, I turned right onto a marked singletrack trail and descended to the junction of the Ferrins, Skyline and West Game trails.

At this junction I said hi to a mountain biker breathing heavily from his ascent up Ferrins and took a right onto the West Game Trail.

I biked this trail about 10 years ago. Hiking down it, though, I remembered nothing of that ride, so it was like I was on a new trail. It especially felt like a new trail when I entered part of the area burned in the 2012 Little Horsethief Fire.

I wanted to stop and take artsy photos of the green grass and pockets of pinkish purple sticky geraniums amid all the standing dead charred trees. I managed two photos before flies attacked me — horseflies, regular flies and some kind of mini-fly that was the hardest of all to kill.

My original plan had been to start my hike in the morning, as soon as the chairlift opened at 9, but work interfered and I didn’t get on the chairlift until 11:30. I bet flies would be less active earlier in the day, before temperatures heat up. (The flies continued to launch attacks every time I stood still for more than a second. I was finally free of them only when riding the chairlift down the front of Snow King.)

“Trail” is a bit too grandiose to describe what exists in Leeks Canyon. “Faint track” is more accurate. It was obviously a road at some point, but that “some point” was likely several decades ago. (I reached out to the Forest Service to see if they had any plans to improve the Leeks track but didn’t hear back.)

While the Leeks Canyon track is uneven and full of pits and mounds that want to roll your ankles, it’s not difficult to follow. Two days before I hiked this loop my boyfriend Derek Stal ran it (and he didn’t take the chairlift up or down). Because I’m about as graceful as a Clydesdale, had I run the Leeks Canyon portion I’m sure I would have sprained an ankle. Maybe both.

At 1.75 miles, Leeks Canyon is the longest section of the loop. What it lacks in maintenance, it makes up for with wildflowers and views. The track gradually descends across hillsides still abloom with flowers. Looking past the mouth of the canyon, you see the ranchlands of South Park. Josie’s Ridge rises to the right.

Shortly after passing large boulders dumped here whenever the road was closed, the track hits another service road. Take one final right here and in 1.3 miles you’ll be back up at the top of Snow King’s chairlift. Based on the footprints I saw, this road is more popular with horses than hikers. It’s 800 feet of climbing from the junction of Leeks Canyon and this road to the chairlift, which is just about enough time to mentally prepare yourself to see people again.

Excursion: A loop hike off the backside of Snow King

Distance: About 6 miles and 1,300 vertical feet of climbing

Convenience: Easy, it starts at ends at the base area of Snow King

Cost: A round-trip lift ticket on the scenic chairlift is $20 for ages 7 and up (6 and under are free)