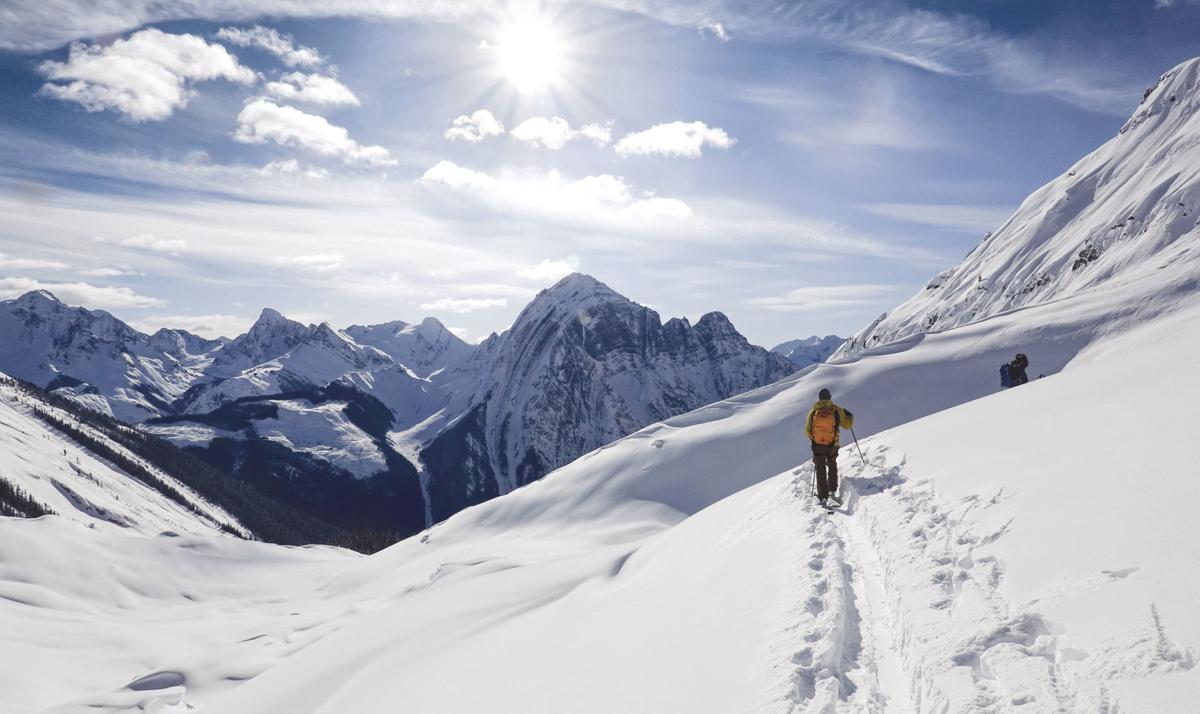 At Icefall Lodge in the Rocky Mountains in British Columbia, you can ski trees, 10,000-plus-foot peaks, and glaciers, including the Diamond Glacier shown here.

Returning to the world after any time away from cellphones and the internet always jars me. Returning to the world March 14 after a week at a backcountry ski lodge in the Canadian Rockies with my boyfriend, Derek, and 18 strangers (13 other skiers, four guides and one cook) was, to put it mildly, Next Level. Coronavirus and COVID-19 existed, and there were confirmed cases in the U.S. on March 7, the morning of which we were flown 35 miles to the lodge from a staging area north of Golden, British Columbia. But life wasn’t yet altered in any major way.

During a short skin up 1,000 feet the afternoon of our arrival, I noticed one of the three skiers from Helena, Montana, had a cough, but it didn’t cross my mind that it was anything but the tail end of a cold. Skiing a foot of fresh powder on a very mellowly pitched slope back to the lodge, which does not have cell service and reserves the internet for emergencies, I couldn’t stop giggling. There is something about low-angle powder that is just so fun. Also, that week at Icefall Lodge was my first vacation for as long as I could remember, and that made me wonderfully happy.

With the exception of Day Three, each day at the lodge was better than the one before.

Day One, which happened to be Derek’s birthday, involved skinning 4,300 feet up from the lodge, traversing glaciers under blue skies to the 10,300-foot summit of Mount Kemmel. From Kemmel’s summit we could see the Columbia Icefield, the Selkirk Mountains and the incredible geology of Mount Arras.

As we skied down the top 1,000 feet were a little wind slabby, but then it was all powder. After a quick stop for lunch, we put our climbing skins back on and climbed another 1,000 feet to optimize the vertical back to the lodge.

At the lodge, there was soup and carrot cake and a wood-heated sauna waiting for us. Dinner that night was chicken in a white wine sauce, with a dessert of lemon cake with buttercream frosting and strawberries. The cook, Geoff, made two cupcakes just for Derek and put candles on them. The whole dining room sang “Happy Birthday.”

That night I fell asleep thinking that if avalanche conditions kept us from skiing the rest of the trip, I didn’t care.

But avalanche conditions didn’t curtail us at all.

Every morning we self-selected into one of two groups, which the guides described as “slow” and “fast” (but neither of which was anywhere near as slow as I’ve experienced skinning with guides elsewhere and neither of which was easy; the “slow” group skinned about 5,000 vertical feet a day).

Day Two, the fast group was told to grab a harness from the lodge’s gear room because we’d be skinning up and across the crevasse-laden Diamond Glacier. (There are seven named glaciers within skinning distance of Icefall Lodge.) We skinned past hanging seracs of teal-colored ice and between crevasses covered by snow bridges.

Skiing down we took a different route than our ascent. It included a 3,000-foot run down a natural half-pipe, which was the single best ski run of my life. From the bottom it was about 3,300 feet of skinning to get back to the lodge, but I smiled the entire way. Waiting at the lodge were lemon cake left over from the night before and salmon chowder.

Day Three my tummy and energy levels were not good. I left the lodge with the fast group but was quickly off the back. At the last point it was safe for me to turn around and descend back to the lodge on my own, I decided to do just that. Ten minutes after making that decision I crawled back into bed thinking I’d spend the day reading. Five hours later I woke up with drool cementing my face to the pillow. I felt completely refreshed.

And then the days got back to each being better than the one before. Day Four was 6,500 vertical feet of face shots in the trees and tandoori chicken for dinner. Day Five was the biggest day of skinning I’d had in years — almost 7,500 vertical feet. Thankfully, dinner that night was particularly delicious and filling — mango glazed ribs.

Day Six, our last day, was cold — about minus 4 degrees Fahrenheit — and windy. Still, we skinned about 3,000 vertical feet to a saddle, where it was all I could do to not be blown over while transitioning from uphill to downhill skiing. We then skied down to two ice caves. At each cave it was possible to ski in one side and come out the other. Dinner that night was make-your-own tacos. (The last morning, I asked Geoff how much food we had eaten over the week: “I plan on 52 pounds per person,” he said.)

And then it was time to pack up and fly out to the real world, where I had thought our biggest problem would be having to again cook for ourselves.

Dina doesn’t usually like to repeat trips, but she’s already thinking about returning to Icefall.

Excursion: A weeklong stay at Icefall Lodge, an accessible-only-by-helicopter ski lodge in the Canadian Rockies

Convenience: Getting there is the hard part; once there all you have to do is skin, ski and eat

Cost: Between Weeklong stays for winter 2021 are between $1,800 and $2,600 US (depending on the week); this includes all food and guiding and a 20-minute helicopter ride to and from the lodge from a staging area a short dive north of Golden, B.C.