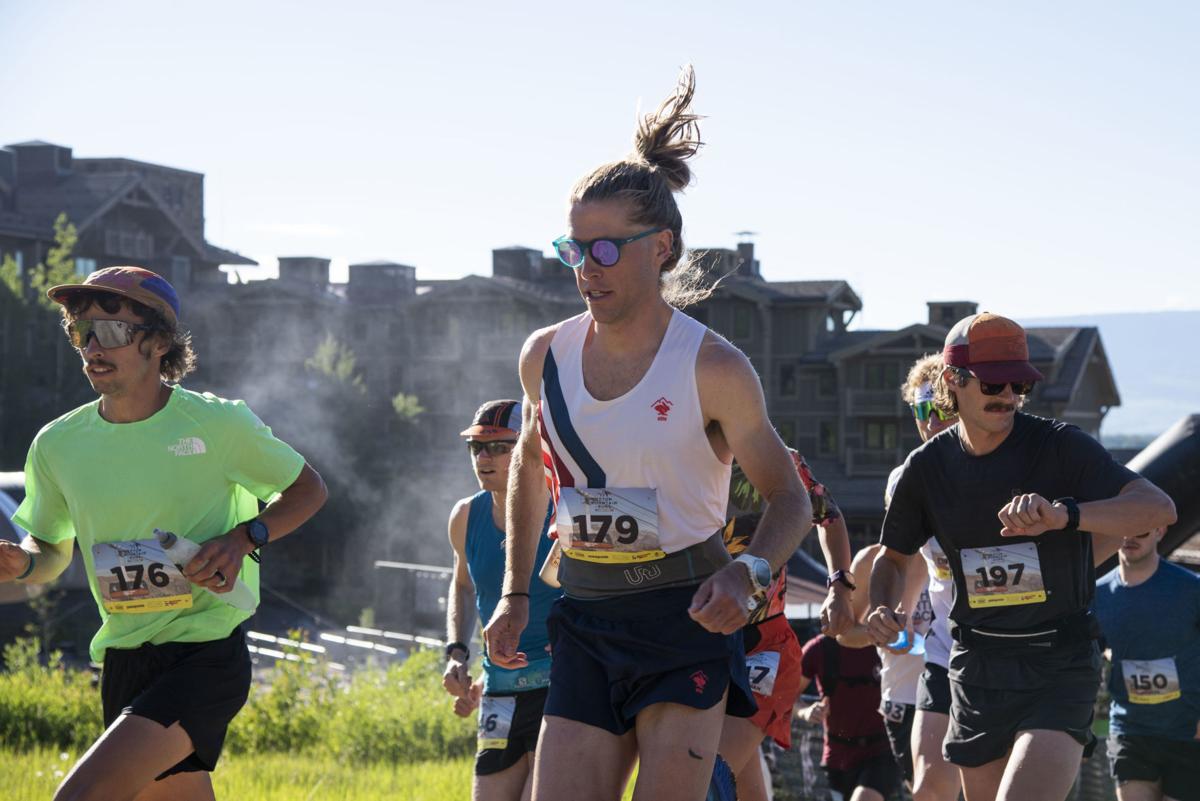 Runners Seth Ruhling, Ryan Becker and Copeland Laris lead the Teton Mountain Runs’ 30-kilometer race at the Jackson Hole Mountain Resort on Saturday. The Teton Mountain races over the weekend had a total of 481 participants. 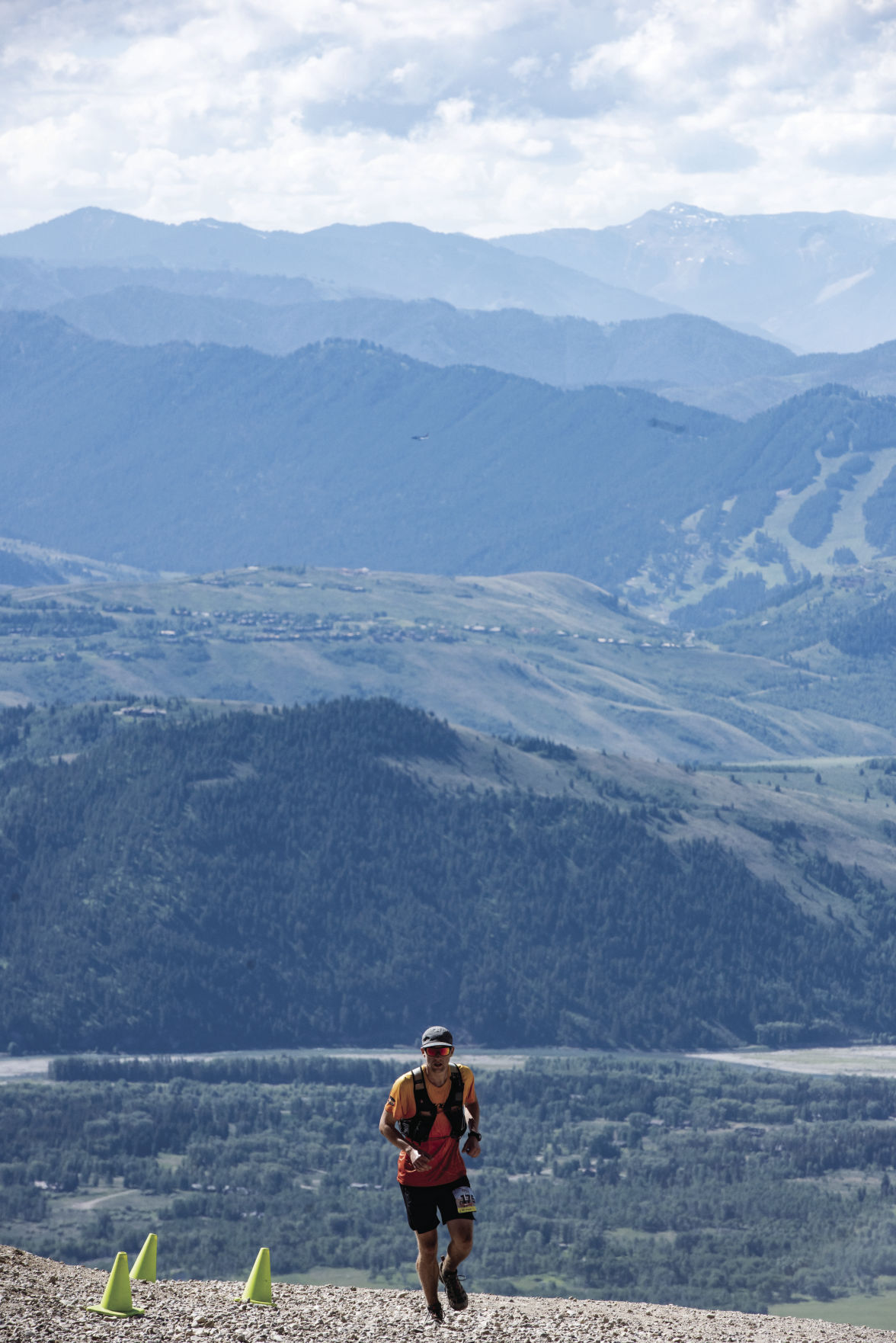 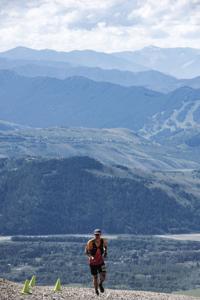 Matthew Manwaring of Keene, New Hampshire, runs up the trail during the Teton Mountain Runs’ 30-kilometer race. Manwaring finished the race in 3:45:45.23. 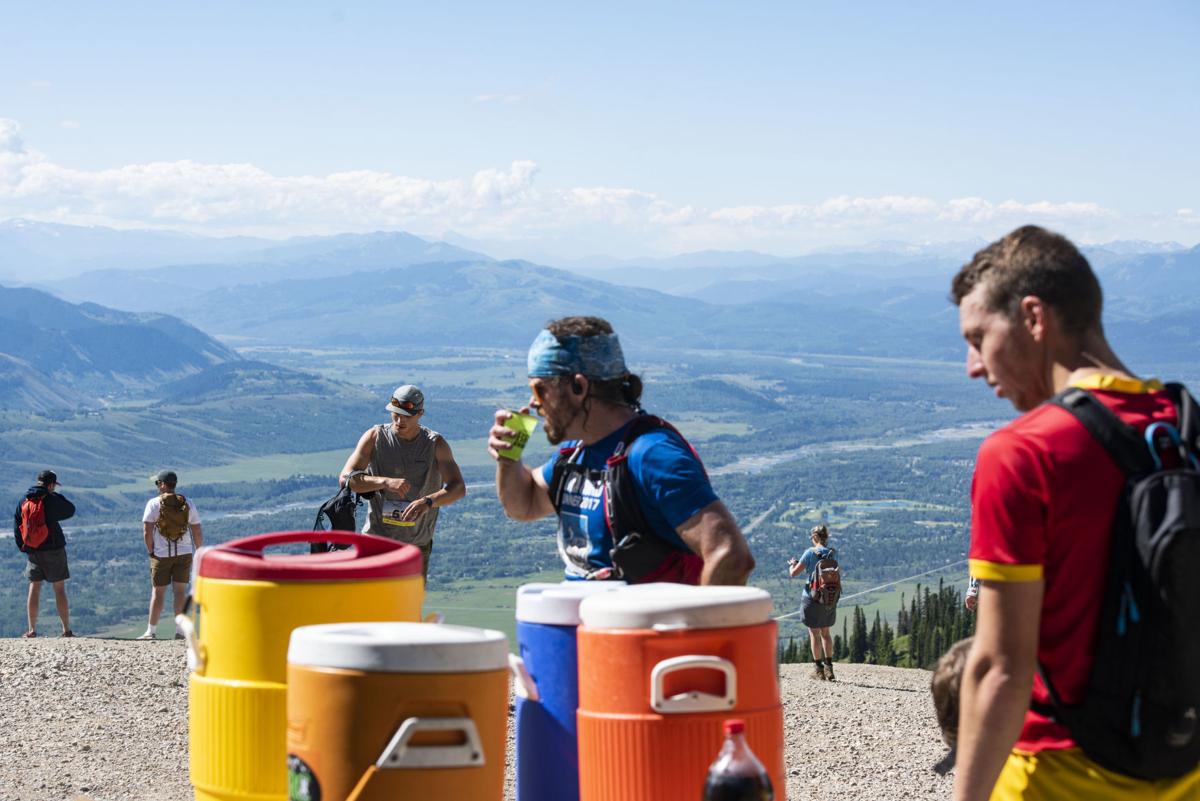 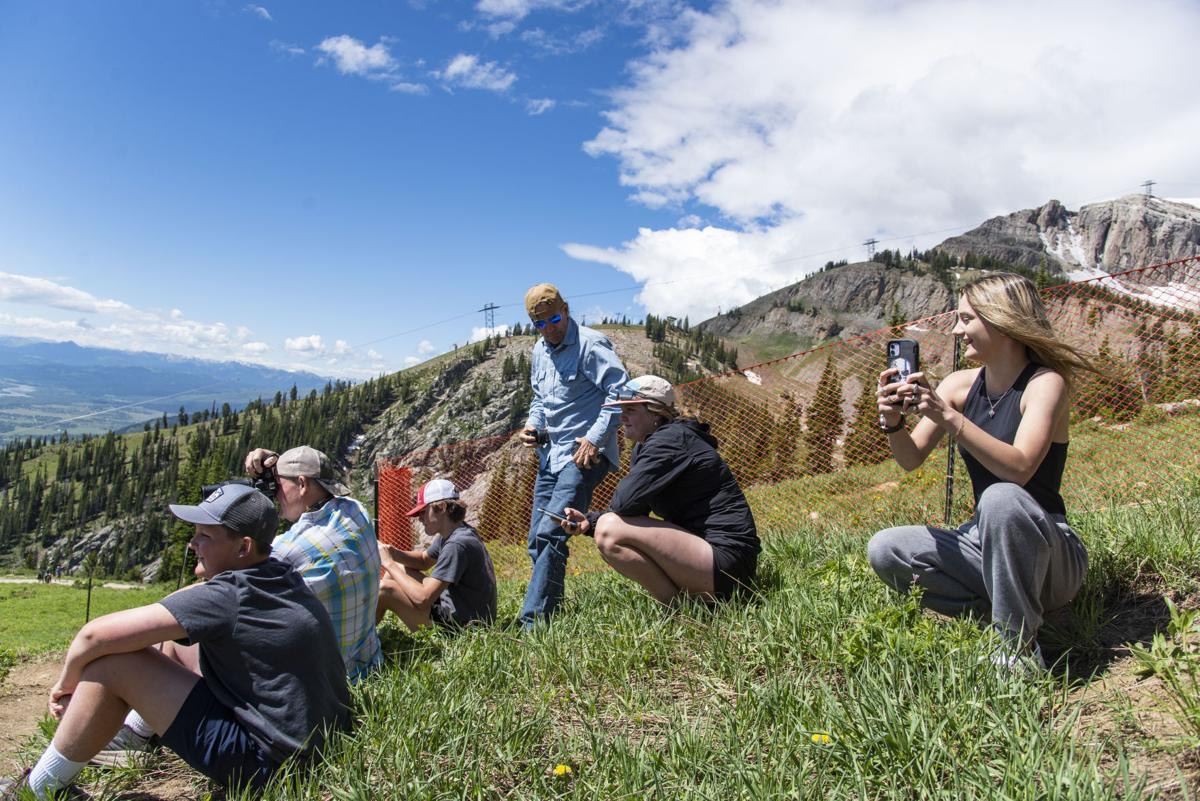 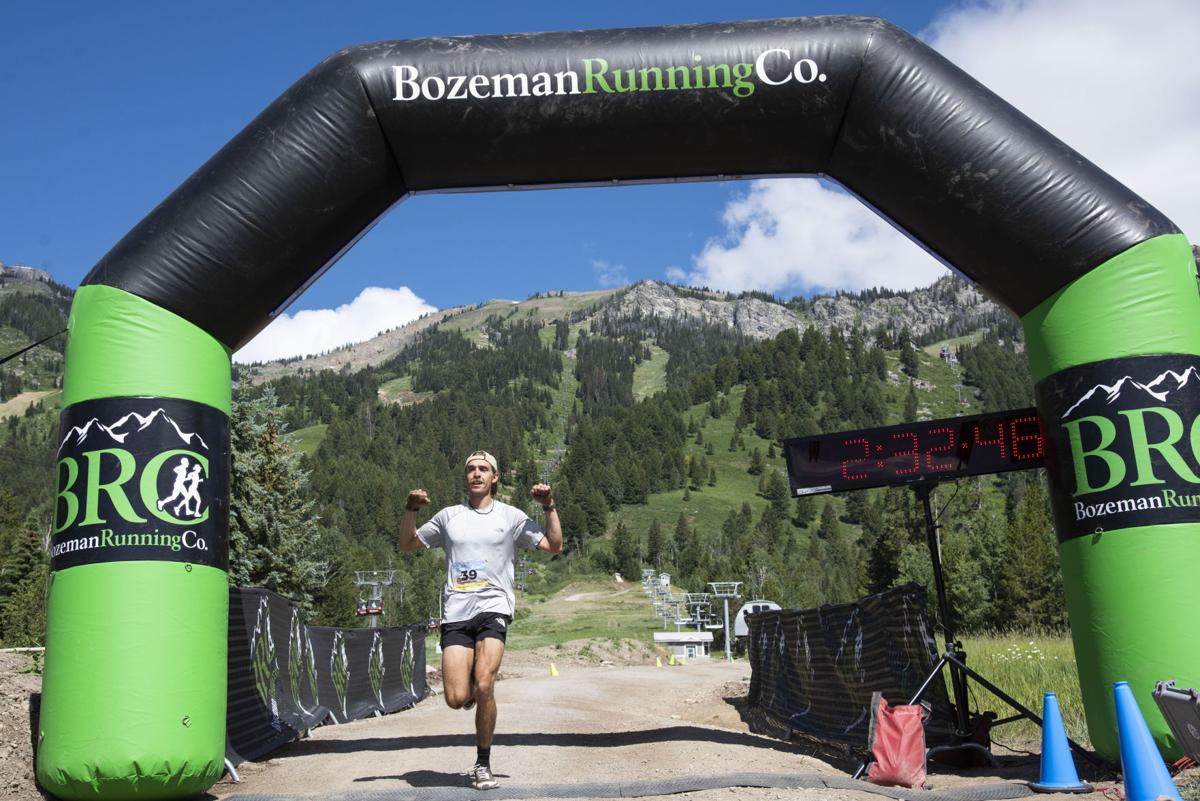 Michelino Sunseri of Kings Beach, California, puts his fists in the air as he becomes the first person to finish the Teton Mountain Runs’ 30-kilometer race at the Jackson Hole Mountain Resort on Saturday. Sunseri finished the race in 2:32:46.90.

A runner makes her way up the steep trail at Jackson Hole Mountain Resort.

“I think there has been a lot of pent up anticipation for these events.” —Casey Jermyn, Bozeman running company

“I need a beer,” the Kings Beach, California, resident hollered.

He had put a stamp on the course, which took him 10,455 feet atop Rendezvous mountain before looping back down to the base.

Sunseri, the self-proclaimed “mountain ninja,” claimed a first-place finish in what was the opening race of the weekend.

Aided by the third-party organization Bozeman Running Company, the resort was able to host three distance races of varying lengths for the first time in the mountain’s history.

Holding events of the 15-km “Wild,” 30-km “Cirque” and 50-km “Cody Peak” caliber, Jackson Hole offered opportunities for trail runners of all styles to grapple with, in the intense and rugged terrain of Rendezvous Mountain.

After following the Hoback and Wildflower trails, runners in Saturday’s 30-km slowly worked their way up to the top of the mountain. Eclipsing an elevation of 5,500 feet, runners passed through spectators and family members atop the Bridger Gondola for words of encouragement and motivation as they made their pursuit to the top of Rendezvous.

“Killer course,” said Sunseri, who finished with a time of 2:32:46.90. “Sneaky climbing for the first 10 miles, and then the last 2-mile push up to the top of the summit was really fun. It’s a perfect mountain running course ... challenging in all the right ways.”

With a backdrop of Teton Valley as the runners cut through the mountains, the views provided a one-of-a-kind experience for even the most seasoned trail runners.

“Running up to the top of the peak and seeing Cody Bowl up there, and the wildflowers ... I ran into four moose on the trail. It doesn’t really get better than that,” Sunseri said.

Sunseri, joined on Sunday by Paul Lefrancois in the 15-km race and Arthur Whitehead in the 50-km race, shared the title as first-place finishers in the first distance running races held at the resort.

The event was a big step for the resort, as the region slowly opens back up and allows outdoor recreation events to be held with less restriction.

“I think we had just over 470 registered runners for all three races, which is phenomenal for year one,” said Casey Jermyn, the owner of Bozeman Running Company and director of the event. “That far exceeded my expectations. I think that truly shows that there is a lot of interest and this could potentially be a really nice event in the future. If you know trail runs and how they launch, that is a big start.”

Jermyn coordinates about 30 races a year for his company. He initially reached out to the resort about the possibility of an event after visiting the mountain several times. The races finally happened after they were pushed back due to COVID-19.

“I think there has been a lot of demand and pent up anticipation for these events because we’ve been on lock down for all of last year,” Jermyn said. “I think people are just really excited to get back and do events when they can.”

No masks were required and the resort allowed a limitless number of spectators. Dozens cheered on the runners during their start from the base and near the top of the Bridger Gondola as they made their final push for the peak of Rendezvous.

With the stage set for a remarkable event, all that was left for a perfect race was the weather, and according to Jermyn, the weather could not have been any better.

While the mountain has hosted the 8-mile Rendezvous Mountain Hillclimb for many years, this event could add a distance run to the repertoire of offerings during the summer months at the resort on an annual basis.

With inaugural running races like the Teton Mountain Runs, the concern among local residents typically revolves around the extent that important Leave No Trace principles are being followed.

Following the races, Jackson Hole Mountain Resort spokesperson Anna Cole confirmed that the chalk used to mark the trail was water-soluble and should wash off with the next storm. As with the metal pitons planted into the rock for emergency rescue, the mountain clean up crew is currently working to remove them all.