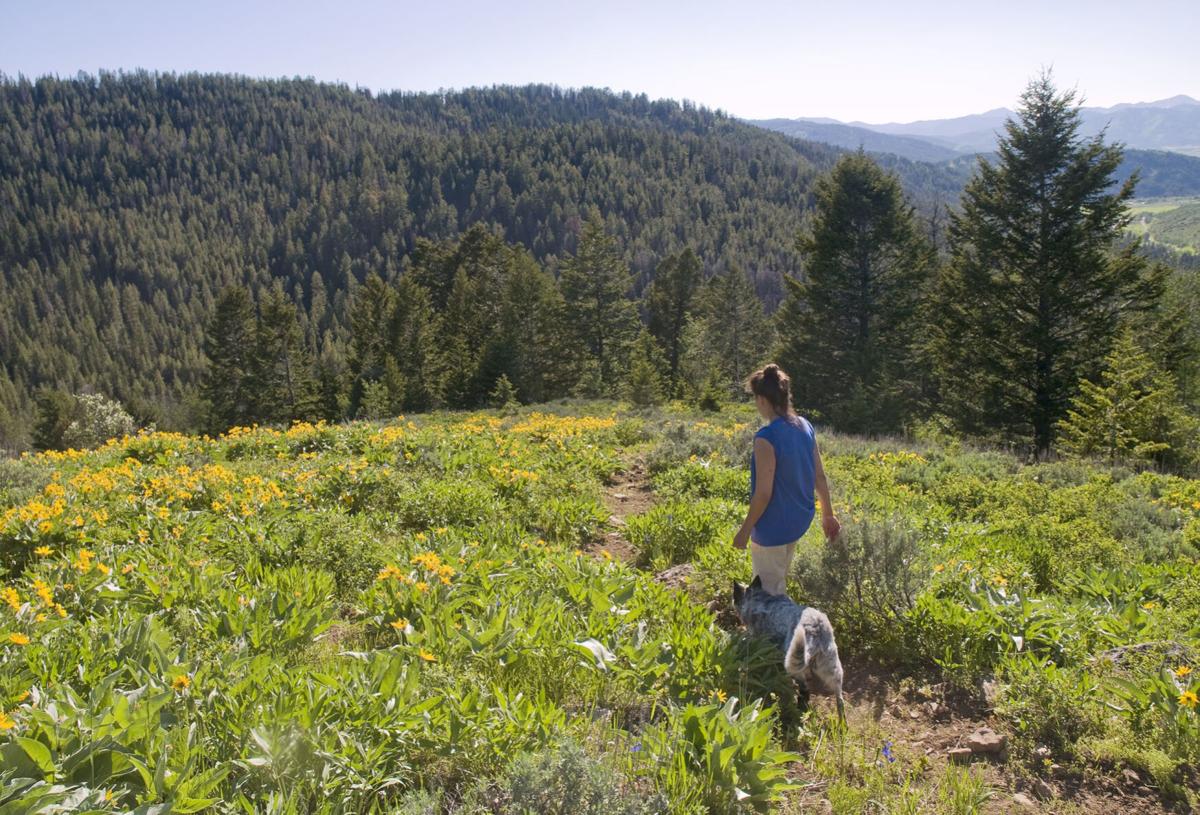 Mask or no mask when recreating outdoors? The author explores the etiquette.

Since the onset of the COVID-19 pandemic I have been pretty good about following Centers for Disease Control and Prevention guidelines for minimizing my risk of catching or spreading the disease. I wear a mask in public places and try to do all my socializing and exercising outdoors and separated from others. But I don’t always measure the distances between myself and my friends, and I haven’t worn a mask hiking or biking in the mountains.

This past weekend a friend and I hiked the Paintbrush-Cascade Loop in Grand Teton National Park. I thought if we hiked on Monday most of the Labor Day crowds would be heading home. That turned out to be naive. Though the crowds may have been less than they were Saturday or Sunday, there were still plenty of people in Cascade Canyon, and as we got lower down we passed or were passed by other hikers every couple of minutes. Suddenly I wondered if I should be wearing a mask.

If I had to guess, I’d say that about a third of the people we ran into wore masks. Some people pulled them on as we approached; others seemed content to wear one at all times. My friend and I had worn masks to drive over to the park from Teton Valley, Idaho, but once we left the car we abandoned them on the dashboard. I thought that was OK, but as I walked by masked people I began to question my decision and found myself feeling guilty about having an uncovered face.

The CDC guidelines are very clear: It is essential to wear a face covering when you are in public and unable to maintain a social distance of at least 6 feet from others. As we all know now, a mask protects others by blocking the respiratory droplets carrying virus particles that escape when we breathe, talk, laugh, sing, sneeze or cough. The louder we talk, the more violent the sneeze, the heavier our breathing, the more particles emitted. Double-layer masks also give the wearer some measure of protection from inhaling viral particles from others, although most cloth masks are not 100% effective. Still, if everyone is wearing a mask the risk of the coronavirus transmittal is low, which is why I felt guilty on the trail without one. It seemed as if I was being disrespectful toward the hundreds of individuals I passed, even if our encounter was fleeting.

So in my typical fashion I came home and got on the Internet to try to justify my decision to go maskless. Unfortunately, there isn’t any conclusive data out there on the likelihood of either picking up the virus or transmitting it when you pass people on a hiking or biking trail, in part because it’s pretty unethical to use healthy humans as test subjects to determine what it takes to make them sick. So I couldn’t find anything that said without a doubt it was fine for me to be hiking without a mask. Still, there was one scientific study out of China early in the pandemic that indicated outdoor transmission is pretty unlikely.

That study looked at 1,245 confirmed cases of the virus. Nearly 80% of the infections occurred in people’s homes, with most home outbreaks resulting in three to five cases. Thirty-four percent of the infections happened in a transportation setting, so on buses, trains or planes. Only two cases, linked to one specific contact, took place in an outdoor environment. Still, while the risk is low in the outdoors, it’s not zero.

So does that mean passing someone on the trail without a mask on your face is OK? A big part of what makes people sick is the viral load — or just how much exposure to the virus you get at one time. The current belief is that it takes a few hundred to a few thousand viral particles to overwhelm an individual’s immune response, causing that person to become sick or at least infectious. Again, these numbers are theoretical — no one has proved anything beyond a doubt yet — but they are somewhat reassuring if you are moving along a trail and pass someone going the opposite direction. Even if that person is actively coughing or sneezing and spewing the virus into the air, you will pass through the cloud quickly and will therefore be unlikely to inhale enough of the virus to overwhelm your system. But is it different if you are hiking behind someone? If, in that person’s wake, you are constantly being bathed by tiny droplets of virus throughout your hiking day?

Worst-case scenario: You are in a chain of hikers, directly behind someone who is actively shedding the virus, for hours at a time. Add to that, there is no wind. Add to that, no masks. Add to that, you are working hard so the person in front of you is breathing heavily, not to mention coughing and sneezing occasionally. And maybe he or she likes to talk loudly or sing on the trail. In that situation it is possible you could find yourself subjected to enough viral load to get sick. But that is a lot of ifs.

Erin Bromage, a comparative immunologist and professor of biology at the University of Massachusetts Dartmouth, has devised the following equation to help people understand how likely they are to become sick: “Successful infection = Exposure to virus x time.” So you not only have to consider the number of viral particles someone is shedding, or your exposure, you also have to think about just how long you inhaled or otherwise ingested those viral particles.

Large droplets — those sneezes you can actually see — are heavy and drop down to the ground quickly, so while you don’t want to stand in someone’s spray, if you aren’t in the direct line of fire the sneeze isn’t going to stick around too long. But droplets less than 5 microns in diameter, called aerosols, can linger in the air for hours, which means you can be breathing in lots of viral particles without knowing it. I thought about this when I hiked past people who smelled strongly of perfume or cologne. If I could smell them, I was inhaling aerosols off their body, which means I could also be inhaling viral particles if they happen to be shedding them.

However, and here’s the positive thing for us outdoorsy types, Dutch researchers using a special spray nozzle to simulate the expulsion of saliva droplets found that even cracking a door or window to get a little bit of air flow can banish aerosols pretty darn quickly.

So most likely hiking in the outdoors, even on a relatively crowded day in Grand Teton National Park, has a comparatively low risk of infection, especially if you are not standing close to one person for a prolonged period of time.

But, there is a lot to be said about the symbolic power of a mask, and that’s where my guilt kicks in. I want people to know I take this pandemic seriously. I want them to know that I have both their health and my own health in mind when I venture out of my house. I want to be part of the solution.

And so for that reason I think that next time I go hiking I am bringing my mask so that when I am passing others I can pull it up. It may be just a gesture, but at this point it seems like an important one.

Molly Absolon writes Mountainside every other week. Contact her via columnists@jhnewsandguide.com.

Molly, thanks for this. I do believe in the symbolic power while at the same time feeling that outdoor transmission risk is low. I avoided Cascade Canyon all summer until doing an up and over via Hurricane Pass a couple of weeks ago and the traffic in Cascade was horrific, in stark contrast to very light traffic on the pass and other side. I won't go back to Cascade Canyon until I'm sure...