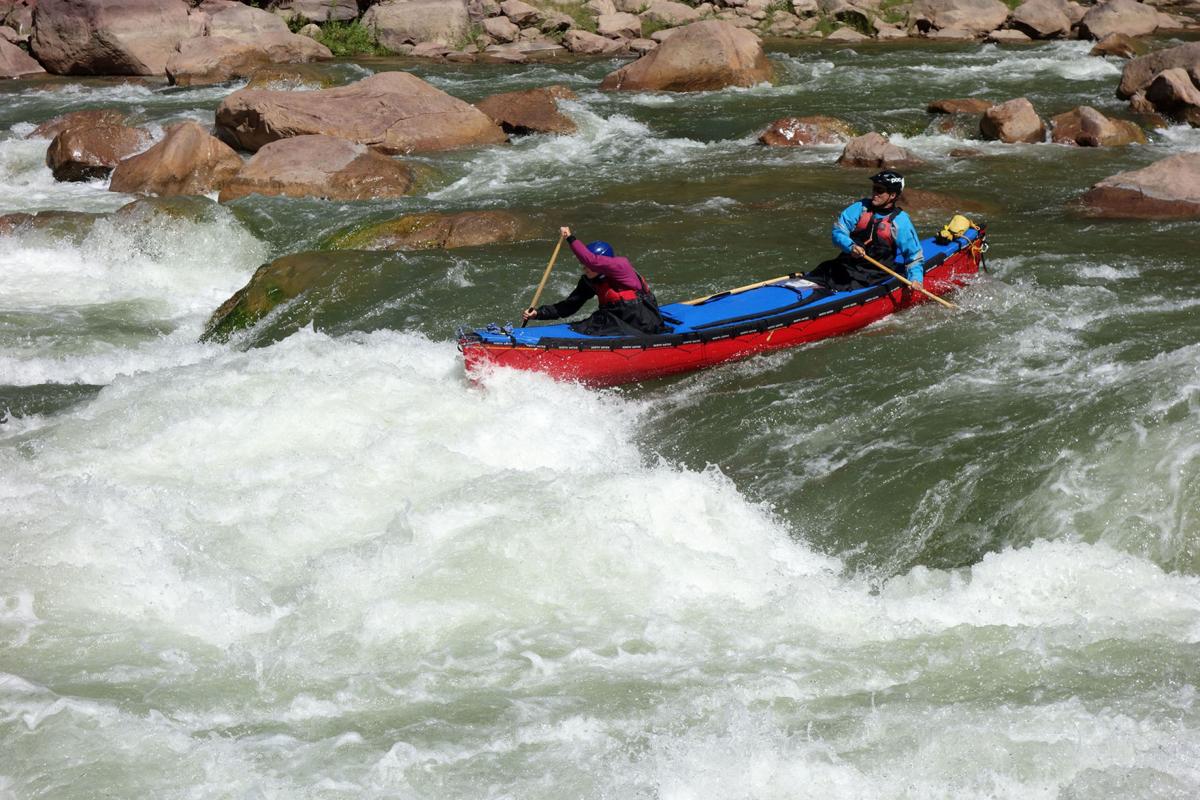 Molly Absolon and Allen O’Bannon head into Hell’s Half Mile in the Green River’s Gates of Lodore Canyon.

You’ve heard it before: Tandem canoes (or tandem kayaks for that matter) are called divorce boats, so why would any couple jeopardize their relationship by launching on a river in one? Well, that’s just what my husband and I have done, and, for the most part, it’s been great, although we’ve had our moments.

For example, earlier this summer on the Main Salmon River, I found myself in the bow of a canoe driving down on a boulder that poked up out of the water as my husband yelled at me from the stern to keep paddling forward. I’d mentioned — or maybe screamed — that the rock was in front of us, but he insisted we were fine, on the right current to bypass the obstacle. I kept paddling and, as I expected, we crashed into the rock. Our canoe has a small war wound from that collision — a dent in the bow — but we survived unscathed, although I felt a little vindicated. After all, I’d told him we were going to hit the rock.

These are the kind of moments that earn the canoe its ignoble moniker — the moments when couples are yelling at each other over the roar of the river about which way to go and what to do. And it can get bad. I’ve heard stories about people switching out of boats to get away from their partner mid-trip. It was that or divorce, they joked.

For the most part tandem canoeing has been the opposite of a divorce boat for my husband and me. Allen has been a whitewater boater for years; I have not. I stuck mostly to dry land in my outdoor career after an unsuccessful attempt to become a kayaker in the early ’90s. I never was comfortable being upside down in a boat, which definitely puts a damper on anyone’s kayaking career. I gave up without much of a fight and stuck to rock and snow — things that usually don’t move — to get my adrenaline fix. But when Allen and I got together 11 years or so ago, water suddenly came back into my life. Allen liked to boat. We were invited on river trips. I needed to learn how to paddle something if I wanted to be more than an ornament on the front of someone’s raft.

About five years ago, Allen bought a whitewater canoe, and our saga as canoeists began. From the beginning, I’d say it has been more about teamwork than fighting for us. It helped that I was a newbie. I’d paddled canoes on lakes at summer camp as a kid, so I know how to put some power into my stroke and can draw and sweep and pry with the best of them. But I had no whitewater canoeing experience, and so no ego in the game. I was perfectly content to sit in the bow, where my primary job was to paddle hard while Allen took the stern and steered.

That partnership has allowed me to experience the thrill of whitewater boating with the comfort of being part of a team. I gain incredible confidence being in a boat with Allen. He has the experience to pick out our lines and shout out instructions, and together we have paddled some really fun, challenging rapids. Of course, we aren’t perfect, and at times our communication breaks down (maybe a little more these days as I begin to have more opinions on things!), but for the most part I find the teamwork aspect thrilling. It’s something I haven’t had since I quit rock climbing, and in some ways paddling a tandem canoe involves even more teamwork than I ever experienced with a climbing partner. Allen and I have to make split-second decisions together as we move through the water. Sometimes those decisions are spoken, sometimes the river dictates them and we have to respond spontaneously. For the most part I know what to do now and so running a rapid really feels as if we are working together as equal partners. It’s exciting and a great way for us to share an adventure together.

But I think there is something about having your adventure partner also be your life partner that can be both difficult and rewarding. At first in a relationship, you are on your best behavior regardless of the circumstances. It never occurred to me to scream obscenities at my partner in the rosy glow of early love. But somewhere along the line that changed. Somewhere along the line I no longer felt I had to prove myself and I could let down my guard. That meant when I was frightened, I could lash out with impunity. Maybe that is where the idea of the divorce boat actually comes from. It’s not that decision-making as a team is a problem for couples, it’s that fear breaks down societal niceties and we can become mean, something we don’t let ourselves do with friends or in new relationships.

I’ve always been grateful that my best outdoor partners have been my romantic partners. Our adventures together have been a key part of what makes our relationships work, but I know many people who choose not to do stuff with their partner specifically because they believe it holds them back in some way. Maybe they are more nervous about risk when the person they love is involved. Maybe differences in skill level mean one person is always outside his or her comfort zone while the other isn’t challenged enough; maybe it’s that you don’t have to perform in front of your partner and, therefore, can get away with not trying, giving up or quitting. Maybe the fact that you can yell at each other, or cry and scream and swear when you get scared is a kind of crutch that always keeps you at a low level of skill.

That definitely makes sense for my climbing career, which when I am honest with myself was more about my first husband’s drive than mine. But canoeing feels different, in part because we are actually in the boat, working together. Climbing is more individual. You have to get up a pitch on your own. Sure, you can rest on the rope or even be hauled up a hard stretch if you can’t do the move, but ultimately it’s you and the rock and no one else. In a canoe Allen is sitting behind me. We are in the boat together and our work complements the other’s. I can’t do it without him and he can’t do it without me, and that symbiosis adds a whole new dimension to our adventure.

Molly Absolon writes every other week. Write her at columnists at JHNewsAndGuide.com.