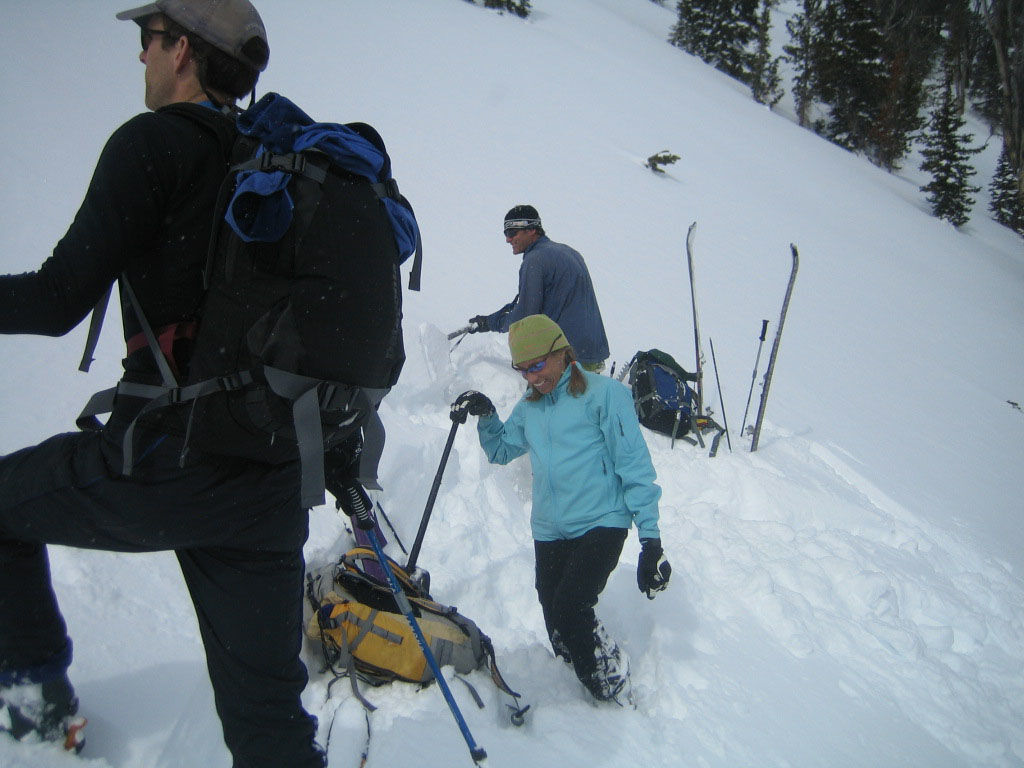 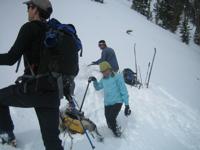 Allen O’Bannon digs a pit to analyze the snow while the others hang out and watch. The author says O’Bannon is usually the one making the decisions about where to ski when they go out together, and when he became less decisive on a recent tour it threw her for a loop.

My husband is usually the boss on our ski excursions. A backcountry ski guide and an avalanche educator, he naturally falls into that role. He’s the professional on our team, after all. But last week he seemed reluctant to assume his normal position. He’d been working nonstop, and I think he just wanted a break from being the decision-maker, but his attitude threw me for a loop. I hadn’t really thought about how much I relied on him to guide me when we went skiing.

Since then I’ve been thinking about roles and leadership, and it came to me that I have a tendency to underestimate the way my assumptions about how I expect other people to behave influence my own behavior. So with my husband I assume he’s the leader, I’m the follower, and that’s the way it always is when we go out together. It’s not a good or bad thing, it’s just how we function. But when he decided not to be the lead I struggled to fill the vacuum, finding it hard to switch out of my normal role.

Years ago a group of friends of mine had a close call while sea kayaking in Patagonia. They were at the end of a three-week trip when they were winded in on a remote beach. They’d made a conscious decision early in the trip to use consensus for all their big decisions rather than designate one particular leader, and for the most part that had worked well for them. But as the hours, and then days, passed stuck on a beach, their system started to break down. There were a number of other factors at work as well. One person was falling in love with another and so found herself wanting to agree with everything he said. One man was tired of always being the naysayer. Another had a higher tolerance for risk and a more go-for-it attitude than the others. To top it off, they were starting to feel pressure to get home to jobs, school and other commitments. The influence of these things on their decision-making was subtle, and I think my friends would probably say they were really clear only in retrospect when they analyzed what happened to them.

Long story short, they decided to raft their kayaks together to see what it felt like to paddle that way in a protective cove. The improvised raft turned out to be remarkably stable, but as they were testing out its seaworthiness they slipped across an unseen line into rough seas where suddenly they could no longer turn around and return to shore. Without having had an in-depth conversation about whether they thought it was safe to paddle out of the cove, they left the cove and were committed to making a long, exposed crossing in dangerous seas. It almost worked. They were in view of their destination when they were hit broadside by a wave and the raft capsized. Luckily, they were close enough to swim to shore, and no one was hurt. But their story always sticks with me. Here were four very experienced outdoors people and trained leaders, and yet, like all of us, they were susceptible to classic human errors, their thinking colored by things like ego, relationships, time pressure, boredom and adrenaline.

During my early NOLS career, I took part in a workshop called “Cockpit Communication.” The workshop was developed by the aviation industry after studies of plane crashes showed evidence that the cause, or partial cause, of many wrecks could be traced to a breakdown in communication within a flight crew. One flight recording we listened to was from a 1978 New York-Denver-Portland, Oregon flight that was nearing its final approach to the airport in Portland when the pilot heard a loud thunk as he attempted to lower the landing gear. Assuming something was wrong, he began circling the airport to figure out what was going on. Meanwhile the flight engineer can be heard quietly warning the pilot that their fuel level was dangerously low. The pilot ignored the warning; he was preoccupied with the landing gear issue. Furthermore, the flight engineer’s voice was low and conveyed no sense of urgency. I found it hard to listen to their conversation. I wanted the flight engineer to scream at the pilot: “We’re going to run out of fuel! We have to land!” But he doesn’t.

In response to this crash and others, the aviation industry began working on improving communication in the cockpit. One thing that came up was that people’s behavior changed under stress in ways that weren’t always predictable, which meant that good communication had to take into account such changes in order to be effective. As part of the workshop I participated in we were asked to take a survey to help identify how our leadership styles shifted in the case of an emergency or difficult decision. As expected for a group of educators, we all tended toward a collaborative, educational leadership style when everything was going well, but when things started to go wrong, 90% of us became directive and authoritative.

That shift seems fairly predictable, but as I thought about it later I began to think that in real life it isn’t quite that simple. My leadership style tends to be heavily influenced by my defined role. So if I am in charge — the captain, the course leader, the lead guide or whatever — it’s my job to be directive, and so I am or can be. But when I am out with my peers or partner that style doesn’t feel comfortable, and when I’m with my four siblings I assume a totally different persona that harks back, unfortunately, to childhood patterns. Similarly, when my friends were on the beach in Patagonia their styles were different than when they were in a designated leadership role, and it confused their communication. One of the things that struck me the most when I heard their story was when one said about another, “He was always the conservative one, and when he said he thought we should try, I found myself doubting my own opinion.”

Which means, we need to remember that leadership styles can be fluid, especially when someone you routinely go into the backcountry with doesn’t seem to be behaving in the manner to which you have become accustomed. Which is what happened to me when I went out with my husband last week. I found myself floundering when he abdicated his de facto leadership role. I didn’t want to fill that void. I wanted him to make the calls. It’s not that I’m unable to make decisions on my own; it’s just I rarely do with him and so didn’t feel comfortable stepping in. And it’s not just with my husband. I have some pretty alpha ski partners, and when I’m out with them I prefer to step back and follow. Why? I’m not sure. I guess it’s a role I’ve fallen into over the years. It would probably be good for me to work to be more assertive, but almost more importantly I need to remember that my tendency is to step back, and in order to avoid being the flight engineer quietly watching the fuel level drop I have to be prepared to get out of my comfort zone and speak up when I see something of concern.