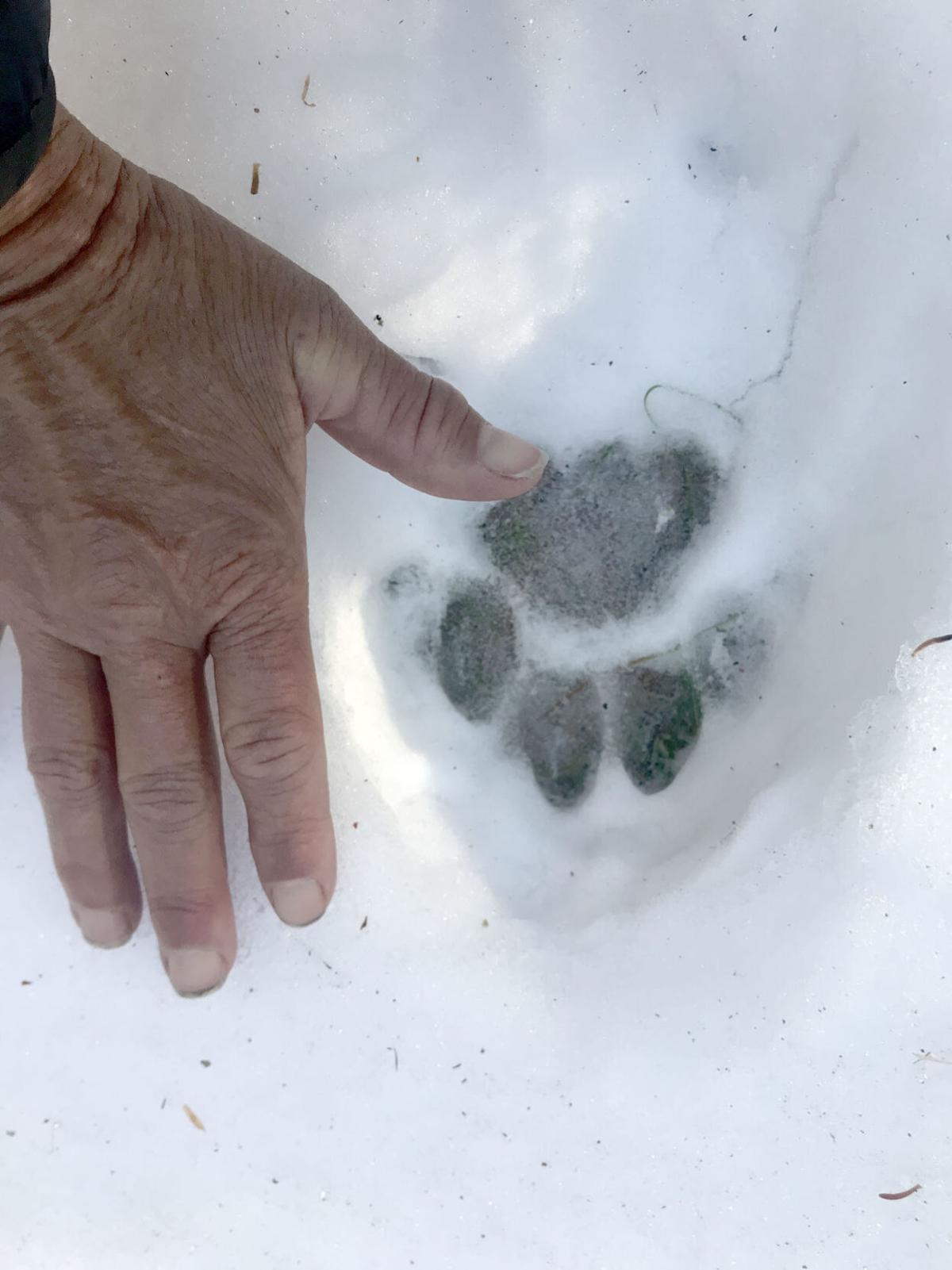 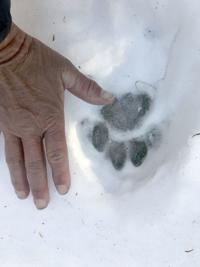 Relatively fresh mountain lion tracks should have been a signal for the author to turn around on a recent hike, but her goal got in the way of her better judgment.

Last week I found myself bushwacking alone through heavy underbrush, struggling to make my way forward. I was following a map on my phone, and according to the slowly moving little blue dot I was close to a trail, but closing the gap was taking longer than I’d anticipated. On top of that, I’d crossed mountain lion tracks in three places. The tracks looked fresh enough to scare me, so I was hiking fast, singing loudly and frantically pushing forward in search of the trail.

Obviously, I found my way and the lion did not attack me or even make an appearance. But as I thrashed through the undergrowth, scratching my arms on bushes, stumbling over deadfall, and rushing to get away from the mountain lion I feared was watching my every move, I thought a bit about why I refused to turn around and retreat. Why didn’t I back track the first time I came upon the lion tracks, before I got deeper into the woods? Why didn’t I call it good when it became obvious that the undergrowth was getting thick? Why did I feel compelled to complete my loop?

It would be one thing if I could say that this was the first time my pigheadedness got in the way of my brain, but it isn’t. I have lots of memories of scratching my way up nasty loose slopes, through thick, spiny bushes or over slippery boulders in an effort to reach some objective. Often I don’t even remember the objective, but I almost always remember the trials and tribulations I endured on the way to wherever it was.

Which is interesting. Here I am motivated by some random goal I’ve picked, and yet I don’t even remember the goal. I just remember the journey. Which is what we are supposed to focus on, right? But for some reason I don’t seem to work that way. I, like so many Americans, have been trained to work toward goals. There’s even a mnemonic for effective goal setting: SMART, which stands for specific, measurable, attainable, realistic and timely. Goals, we are told, are important because they push us to be better, faster, smarter, to accomplish more. Goals help you improve yourself, and yet is that always true? How often do goals blind us? How often do we do stupid things like continue scrambling through thick underbrush next to mountain lion tracks because we’d picked out a route on the map that morning that we’d set out to complete?

Turns out the literature on goal setting is actually changing. Behavioral scientists are increasingly pointing out the negative side effects of our fixation on goals, and those side effects can be destructive. At their most benign, our inability to achieve a goal can make us feel like a failure, which can be damaging to our self-esteem. A blow to one’s ego isn’t that big a deal and is probably helpful for character-building, but other side effects of goal setting are more insidious. Turns out that in business too much emphasis on goals can lead to unethical behavior, cheating, cutting corners, fixation on one outcome at the expense of others, distorted concepts of risk and reduced intrinsic motivation.

In sports these effects can be seen in things like the use of performance-enhancing drugs and the constant need to up the ante of the hazards you confront in order to stay at the top of your game. It is behind people pushing forward to climb a peak, run a river or complete a hiking loop, despite deteriorating weather, fatigue, avalanche hazard and fresh mountain lion tracks. When you overcome these odds and succeed, it’s awesome. But when you don’t, what is it? Stupidity because you ignored the warning signs?

I sat in on a Zoom presentation on behavior economics and avalanches the other night. The presenter cited a study on goals and cab drivers in New York City. He said that cab drivers get more fares on rainy, stormy days than they do on sunny ones. So logically you’d think driving longer hours in bad weather when you make more money would be the norm, but in fact it turns out that drivers actually spend more time in their cabs on sunny days. Why? Because they set a goal on how much money they want to make each day and drive until they achieve that number, which takes longer on sunny, quiet days. Their arbitrary goal prevents them from being able to think creatively and respond spontaneously to changing conditions to achieve their desired outcome. Humans, it turns out, have a hard time letting go of goals, and that reluctance can get in their way as often as it pushes them to excel.

I recognize that in order to be a sponsored mountain athlete you need to be extraordinary, which means you need to have goals that push you to new levels of achievement — levels that very few or no one has achieved before. But when you are ordinary like me, how useful are goals? Does it matter if I climb the boot track up Glory in under an hour or pop over a jump on my bicycle rather than ride around it? Who cares what I do? Does it make me any happier? Any more likeable as a person?

I sometimes feel pressure to do rad things around here. I know that pressure is self-induced, but the notion that our worth is measured by our accomplishments isn’t all internal. It’s comes from Instagram and Facebook. It comes from ski movies and YouTube. It comes from a casual conversation with a friend when you find out she just completed the Picnic or ran up the Grand after work. It happens when someone casually drops the rating of his latest climb, which is harder than anything you’ve ever touched. It’s the constant pressure to be pushing limits, getting better, moving faster and keeping up with the Joneses, which around here means a lot more than having a nice car, awesome clothes and well-behaved children.

The thing is, at this stage in my life I have to accept the fact that I am not going to be keeping up with any of the Jackson Joneses anymore. Like it or not, I am getting older, and much as I push myself and still get after it my achievements are more often met with a, “Wow, you inspire me. I hope I’m doing that when I’m your age,” than a simple “Wow, you did what?”

Years ago, a friend, who is a bit older than I am, told me he’d taken up surfing because at that point in his life it was the only sport in which he could see improvement rather than decline. I think about his comment often, and I thought about it again as I found myself considering the effect of goals. At my age, goals can be a bit disheartening. It’s not that I am incapable of performing perfectly adequately on my bike or skis, but it’s pretty unrealistic for me to think I’m ever going to get that much better at any of these activities. I mean bending over to buckle my ski boots often elicits a groan, so who am I kidding when I dream of catching big air or riding extreme lines?

But do I need big air or extreme lines to be happy? Do I need to constantly have a stretch goal to make my life fulfilling? I don’t really think so. I don’t know if goal setting was ever that beneficial to my mental wellbeing. I do know that it has led me to some stupid if not downright risky decisions when I refused to stop, refused to turn around, refused to listen to that inner voice that told me I should give up.

We are trained to dislike quitters. We are trained to idolize people who push through adversity and uncertainty to achieve spectacular things. And there is something remarkable about what people have done in the face of what seem to be insurmountable odds. If people didn’t set goals and work hard toward them, records wouldn’t fall and new things wouldn’t happen. But, and here’s the thing I’m finally learning, achieving a goal doesn’t guarantee happiness. It doesn’t make you a better or smarter person. It doesn’t even make you more popular, except perhaps on Instagram. And the satisfaction of your achievement is disappointingly fleeting.

What does make you better is recognizing that in the long run, cliched as it sounds, it is the journey that you will remember even if that journey sucks. So my new goal is to forget about goals and focus on the path, but the path toward what? A goal? Ugh, it’s complicated, but hopefully I can at least let go of my blind adherence to one outcome when all the signals around me are telling me it’s risky to proceed.