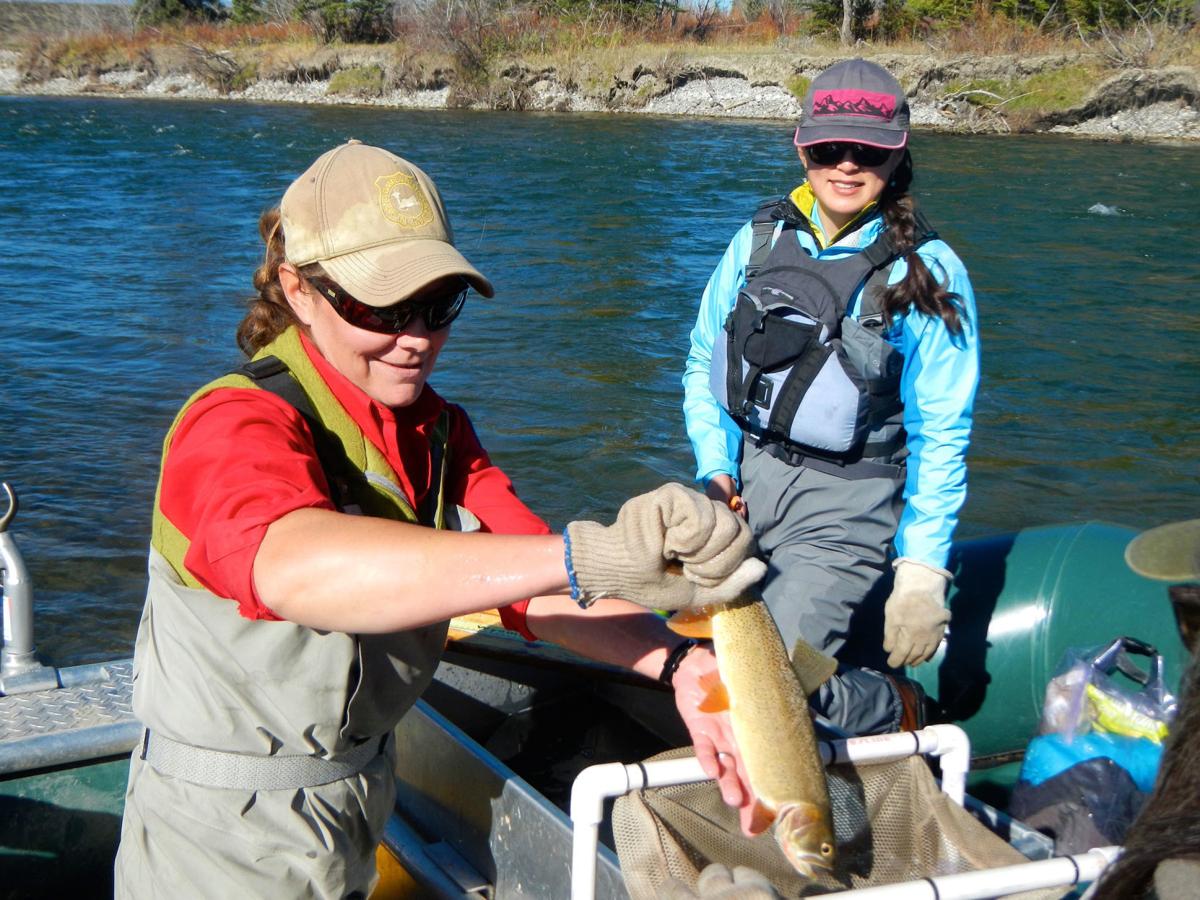 Ever since I began exploring the West while driving or wading along handsome river stretches I felt sorry for lone females occupying passenger seats in parked vehicles. The women inside often were reading, writing notes or knitting. Outside was a bucolic waterway where a husband or companion was doing his best Izaak Walton imitation.

These repeated sightings left me sad.

Rivers and streams fascinate me, and I love sharing their pleasures. Thus I’ve always pitied vehicle-detainees left behind and denied nature’s magic.

Yes, I acknowledge the obvious: Some women resist the thrill of buzzing and biting insects, goey mud, glaring sun, stumbling over rocks and deadfall, fiendish winds and paling around with slimy little trout.

Being a cheerleader for teaching recreational outdoors perfection, I preach that patient and gentle techniques are demanded when introducing women, youngsters and friends to our cherished pastimes. Happily, the escalating trend in these parts is women taking on the outdoors all by themselves and flourishing in the process.

The foremost negative arising from male struggles to interest a group formerly referred to as “the fairer sex” is well known and emphatically repeated: “Too much yelling!”

Worldly types scold: “Only fools attempt to teach your wife (girlfriend, daughter, etc.) how to drive!”

Men further define this pitfall when they decide to instruct spousal fly and spin casting, river raft and boat operation, knot tying, proper dressing for the weather, live trout releasing, target shooting and gearing up. Warning: Grounds For Instant Divorce: Exterminate all thoughts of backing practice with a boat trailer. This is for another column!

A ringside seat for nearly 40 years in my float fishing boats presented a degree in couples’ behavior. When asked I’ll eagerly share ways to assist both sexes while pursuing outdoorsy recreation together or separately.

This effort begins with a fine quote from my South Fork Skiff drift boat building partner, Ralph Headrick: “You don’t have to say everything that’s on your mind all the time, especially around women.”

With that in mind, I remember how many float fishing days were saved by having diligent women aboard who listened. They succeeded and were unsuspectingly delighted by hooking and landing trout, despite a minimum of fishing experience. I quickly recognized most women to be good listeners and also dexterous. Guiding the male of our species is more challenging. Listening isn’t their foremost trait. Nor is following clear advice, especially concerning manly tasks like fly casting or playing fish. Instruction isn’t always welcomed by many men.

During my river float trips women regularly shied away from the coveted bow (forward seat). With scant exception they preferred to fish from the stern where they felt well-hidden from boat operator scrutiny. This worked to their advantage because they were closer to me and while rowing I could softly describe and also point to where their shorter casts could be placed. When properly executed this becomes an abundantly successful system.

As the rear angler began outperforming her male counterpart up front, often the situation nagged at the bow fishermen. That called for my systematic volume increase of suggestions to the stern fisher. Almost magically the front caster—who’d been doing things his own way—began listening in and his performance improved. This was fun to experience.

During the early 90s Christy Ball and Lori Ann Murphy along with several of their accomplished angling gal pals seized the idea of an all-female fishing guide and western travel operation catering to women. Why not? Guys annually take their bucket list trips to colorful fishing locations. While guiding float trips for Joe Bressler Outfitters, Christy and Lori Ann recognized that women deserved the same opportunity.

Receptions weren’t optimal when fly and tackle shop owners thoughtfully added women to sales staffs. It was sad to overhear male clients ask a fish savvy and capable young woman angler if she knew anything about fishing or who else is here I can talk to? The arrival of women in retail gear shops led to better service, cleaner spaces and vastly improved displays.

I enjoyed what occurred after Westbank Anglers in Jackson opened. Co-owner Kim Vletas was so popular and knowledgable that her husband remembers answering phone calls for Kim. He’d explain that it was her day off and he could help, but the usual reply was, “Thanks, I’ll call back when Kim’s there!”

Women are far better represented in angling history than many realize. Florida author Steve Kantner recognized that meteoric numbers of women are rapidly expanding the sport of fishing. The same also holds true for hunting and the shooting sports. Steve’s timely and conscientious response was to devise a volume detailing a variety of women anglers with significant fishing experiences. Known as The Land Captain for his famous trademark walkabout fly guide service in South Florida, Kantner’s subjects in “50 Women Who Fish” (Wild River Press, 314 pages) is heavily skewed by fly rod profiles but includes all ages and varieties of tackle and locations.

When I noted complexities encountered by the gear industry with ladies sizing and tastes, Land Captain almost bit off more than he could absorb. Over 27 months were needed for meticulous in-person and telephone interviews, follow ups and revisions to assemble the 2,000-word profiles and numerous photos on each angler. The result is a dramatic compilation of women who may have encountered potential glass ceilings but were more than capable of casting ahead to achieve their own success.

Despite producing columns for so many years it is still surprising how many more women than I ever expected, are readers. Some are genuinely interested in the subjects but others read because topics may appeal to fathers, brothers, husbands and male friends. This was pointed out to me long ago and it continues to be factual. It is a special delight when a woman mentions she reads Outdoors.

After extensive analysis I’ve trained to avoid this mistake. Frequently when encountering a young woman who is casting by herself along the river or near an access area, I was inclined to stop, offer a suggestion or give her a fly. I now omit this interruption and don’t interfere, unless asked. My suggestion may be to move downstream a few yards to better water. Letting this lady discover a solution on her own is more valuable than my help. When a trout takes, that shiny revelation lasts forever.

My greatest fortune was meeting and marrying dear Jean, who stays on the water either guiding or fishing even later than I do. She loves her trout, too.