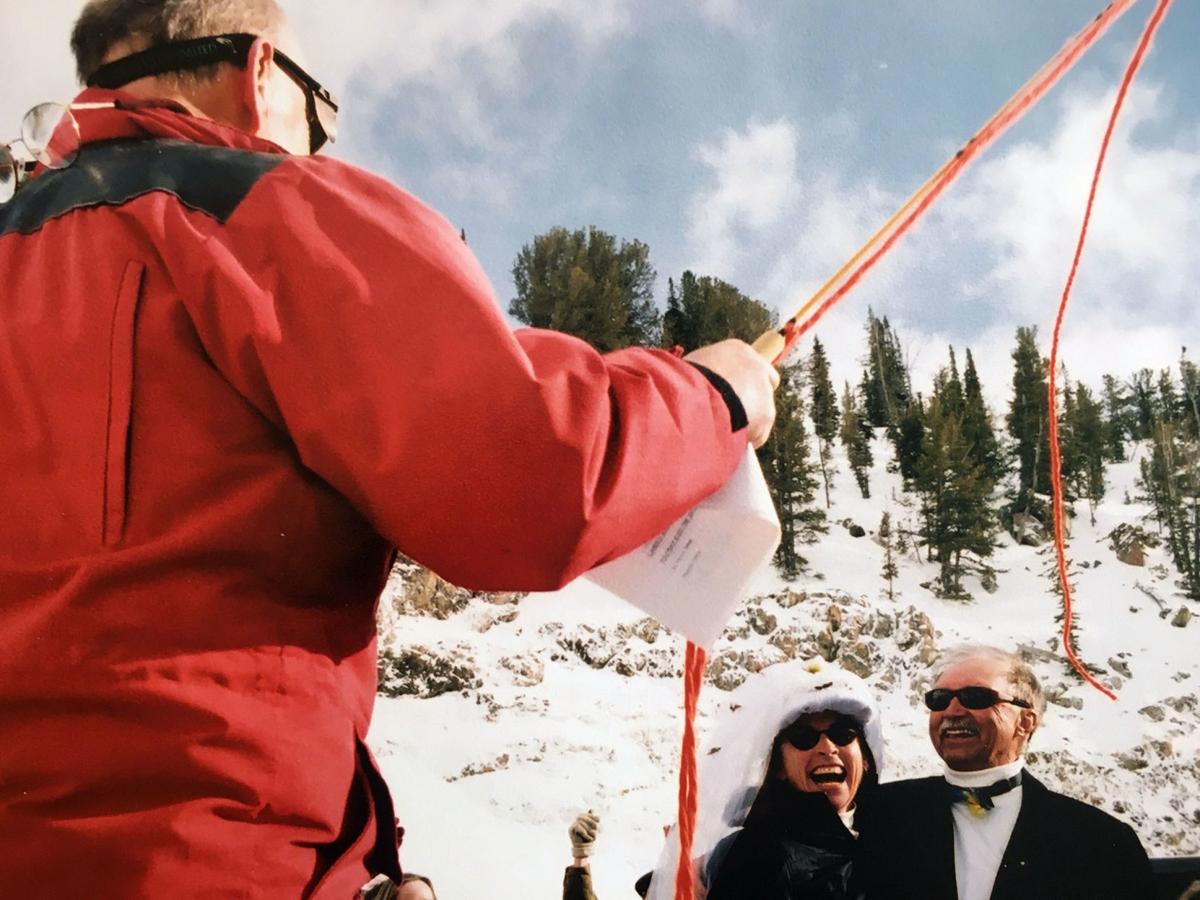 Combine officiating at Patty and Gerry Amadon’s 2001 wedding above the gondola, add the wonderfully choreographed opening day of (skier) fishing season, April Fools’ Day and a glorious Easter Sunday and it forms a never-to-be-forgotten April 1 event.

Pranking friends with fake phone calls was especially popular in the 1970s. I got pretty good at it but still fell for urgent personal demands from the IRS, police chiefs and famous outdoor journalists such as Lefty Kreh, A. J. McClane and Ted Trueblood.

With the heightening of my capricious pals’ skills, I grew more suspicious and wiser. Therefore, by early April of 1974 I was on the verge of shouting BS to a caller from Riverton claiming to be “the Wyoming FBI agent in charge” seeking the Jackson Hole Guide editor (me). So I momentarily hesitated ... This guy sounded genuinely serious!

Floy Tonkin, a former Jackson’s Hole Courier writer and founding Jackson Hole Guide editor, developed into a widely anticipated Cabin Fever Edition magician at the Guide’s helm before its 1968 sale to Fred and Liz McCabe. After becoming Guide editor in early April 1973 and encouraged by studying Tonkin’s creativity, I planned a sensational Cabin Fever/April Fools’ section for the following year.

With the help of my assistant, Emory J. Anderson, and advertising artist Jacque Faure’, a collection of sarcastic, fictitious and occasionally bizarre articles were assembled, illustrated and assigned prominent positions in the Jackson Hole Guide’s 1974 Cabin Fever Special Section.

Before initiating that satirical exhibition, I discussed the concept with my boss, veteran United Press International newsman Fred McCabe. Mr. McCabe was well known for being an extraordinary practical joker involving friends, politicians and opponents. He viewed my scheme with delicate concern, and I could tell he was reluctant to let it proceed.

“Remember to label it “Humor!” he said.

Several prominent stories, despite being laid out upside down, with headlines that went up and down like a bumpy road and were backwards, created unimaginable shock waves.

Emory Anderson’s fictitious tale of how frontiersman John Colter hid in “the Potholes which he dug while being chased by natives” elicited total confusion inside Grand Teton National Park offices of Information Director Anthony “Tony” Bevinetto and his park supervisor, Gary Everhardt.

But it was my fantasy yarn that former U.S. Marine Commandant, General Lewis B. “Chesty” Puller was arriving to be the new director of the airport board and perhaps the county recreation board as well, that dulled the luster of my Cabin Fever scheme.

Due to incessant bickering between the National Park Service and environmentalists versus the airport board, Chamber of Commerce, Jackson Hole Ski Corp. and businessmen, I felt the situation was ripe for an iron-fisted overview by one historically credited as being “the toughest Marine, Chesty Puller.”

I’d read and heard a lot about the legend of Chesty Puller and was further encouraged after a friend explained how her dad and the retired general regularly carried on while problem-solving on her family’s California porch.

That brainstorm caused the FBI to enter this tale. Several Jackson Hole Guide readers complained to the FBI that a “false identity scheme” was developing in Teton County. Such had to be true because they’d read it in the newspaper. That was all the more reportable given that my friend whose father knew Puller had failed to mention the general died in October 1971.

Dutifully I mailed a copy of what became my first and last Jackson Hole Guide Cabin Fever Edition and explanatory note to the special agent in charge of Wyoming. The FBI made no further contact with me personally. That fall Sheriff Steve Rogers casually mentioned when we were fishing on Jackson Lake (for trout, not wahoo!), that an FBI agent had thoroughly questioned him about me.

As exciting as it gets

The year 2001 held a lot of firsts for me, including a total hip replacement, extensive bladder cancer treatment and the unforgettable 9/11 tragedy.

The most enjoyable and unforgettable event from that indelible period came on April 1. At the request of two longtime pals, Patty Reilly and Gerry Amadon, I agreed to officiate at their wedding above the gondola landing at Jackson Hole Mountain Resort. Gerry was still an active ski patroller, so the resort agreed to ease the gondola opening back an hour for the ceremony.

Historically Gerry had been head guide for the Moose Tackle Store. Patty and I had made numerous fly-fishing trips for that RockResorts venue. I had known each of them since my Jackson arrival in 1973.

Coincidentally, April 1, 2001, was also Easter Sunday, which was why all ministers and public marrying officials were already scheduled. It also doubled as April Fools’ Day and the opening of trout fishing on the Snake River.

It was relatively pressure-free to write and plan the ceremony, despite my history of completely falling apart at the first hint of “Here Comes The Bride,” But Gerry and Patty promised that, outside of their families, only a few friends would be present.

“It’s the opening of fishing season, you know.”

The ceremony went off perfectly, only an hour late since a healthy powder dump required extra snow control. Meanwhile, the “few friends” grew into a Cecil B. DeMille all-of-Wilson cast in crazy and wonderful costumes.

Then April Fools’ and trout season really began with A. J. rigging a folded dollar weighted by a horseshoe nail and attached to my spinning line.

“Cast the dollar in front of somebody putting on their goggles and ski poles and gently twitch it away when they grab for it,” A. J. instructed.

After a few tries, my dollar bill casting and working of snowboarders, grandly attired skiers and even an instructor or two were beyond “perfect Henrys Fork presentations!”

“Nobody can hold anything with a ski glove,” A. J. explained.

He was so right. Just as a glove or mitten closed on the dollar a quick twitch of the rod tip on the snow and the folded greenback seductively hip-hopped away with a skier in hot pursuit.

A few of my targets became enraged and charged me while screaming and cursing. Happily, an army of ski patrol backups would rush out proclaiming, “It’s April Fools’ and the opening of fishing season!”

I can’t imagine ever enjoying a wedding, Easter, opening of the fishing season and April Fools’ Day more than that.

After the April Fools’ pranks wrap up, the next day marks yet another new year for the likes of Bill Klyn, George Thompson, Ken Cohen, DeAnna Dutra-Couey (DeAnna Banana the Clown) and myself.