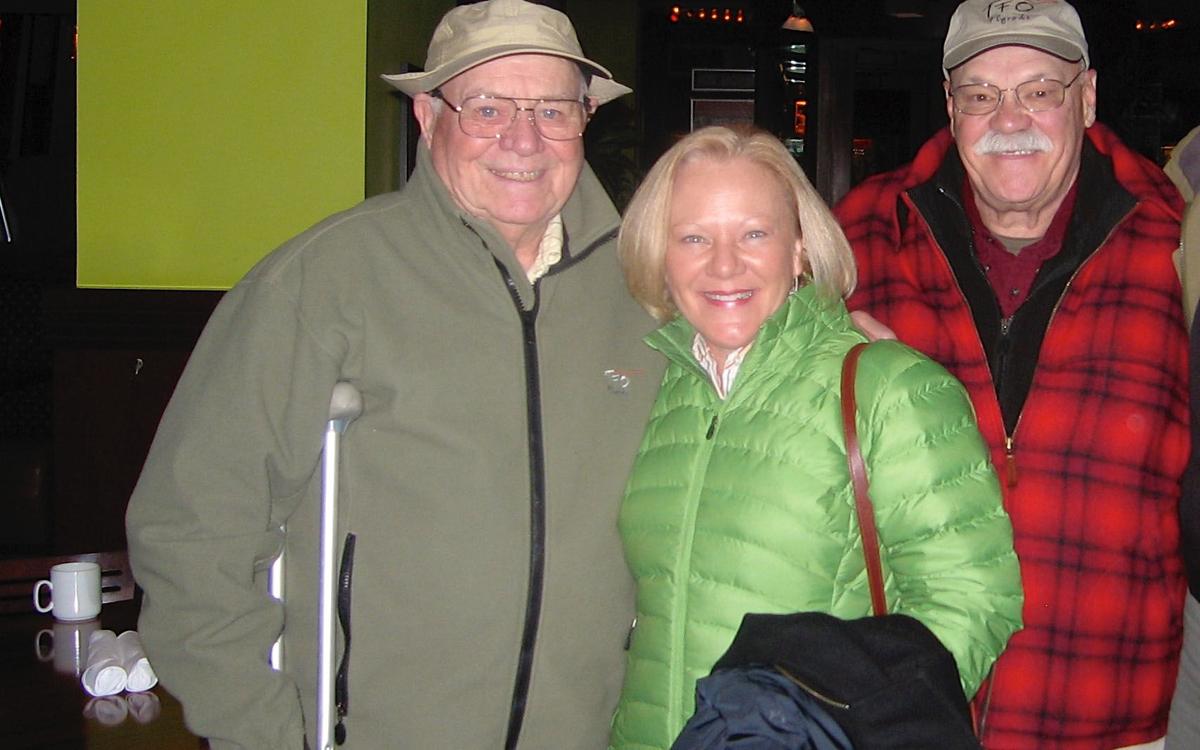 Burnt steaks and the world’s most widely used streamer fly were main discussion subjects when this January 2009 photo of Lefty Kreh, left, and Bob Clouser joined Jean Bruun and Paul Bruun for dinner during the International Sportsman Exposition outdoors show in Denver.

If the iconic ad man had ever become a fly fisherman he’d have repeated the quip to include Clouser’s depth-probing bucktail streamer creations.

A retired Harrisburg fishing guide, author and fly shop owner, Clouser is a robust 81-year-old soaking up winter Florida sun and fly casting along the Indian River in Cocoa Beach.

“I love to experiment, and Florida is a whole new playground for me, with many new fly-fishing challenges,” he emphasized recently during a Backcountry Fly Fishing Association meeting in Melbourne.

“I was a dyed-in-the-wool trout fisherman,” he said, “and that was good until the end of June, when everything heated up.”

Heat also drove the smallmouth bass deep in the nearby Susquehanna River that he adores.

Bob’s slender and uniquely weighted bicolor bucktail streamer was born in 1982 when he crimped a Water Gremlin split shot underneath a hook shank so the point rode hook-up. Before closing the lead weight he added strands of bucktail and some tinsel.

“It was crude but worked on a fly rod as well as jigs did on spinning tackle,” he recalled.

The breakthrough that spelled certain doom for global gamefish came with a creation by Tom Schmuecker, Wapsi Fly Company owner. Lead dumbbell eyes superseded bead chain eyes popularized first on freshwater shad flies and later on bonefish patterns like the Crazy Charlie. Schmuecker made dumbbell molds from the bead chain eyes and forged them into a variety of lead sizes. Later numerous colors and weights of non-lead alloy and tungsten sizes followed.

During the veteran smallmouth guide’s visit with about 50 fly-fishing addicts, he was asked what color patterns and combinations he likes.

“My favorites are chartreuse and yellow, chartreuse and white and all white,” the creator said. “In my boat you’ll always find one rod with a totally white Clouser tied on. White is very hard to beat anywhere baitfish are.”

Most Clouser minnows are two- and often three-color combinations. The growing amount of synthetic tying materials bolstered this pattern’s popularity as materials improved. Bob hints that he especially likes bright colors and often ties eight to 15 strands of flash into each fly.

I particularly enjoyed listening to Clouser answer audience questions. He and Lefty Kreh fished together in many locations around the world for 50 years. Bob has absorbed many of his late friend’s gifts for dealing with fishermen. His sense of humor is engaging, and he also flavors many stories with wit and wisdom, quoting Lefty frequently as well.

Clouser noted that most of his fishing with the Deep Minnow was done with a floating line or an occasional intermediate density.

“My fishing was mainly in shallow water, to about 7 or 8 feet,” he said. “In Pennsylvania the flies were heavier because we had more current than I encounter here in Florida. I’ve scaled back the dumbbell eye weights for most of my Florida trips,” he admits.

Bob reports landing 85 species of fish on his creation during his career.

“I was contacted by a fellow in Washington who had over 117 different species on it so far,” he said.

The audience also wanted to know how much experience Bob had with his fly pattern tied on circle hooks. He reports excellent results using this newer design that is gaining fly-fishing momentum. Originally designed to hook fish in the mouth rather than deep down in the gut when a bait is swallowed, circle hooks have become mandatory in many saltwater fishing tournaments where trolling baits are used and on all terminal gear destined for Florida Gulf Coast bottom fishing as well.

“I’ve found that circle hooks work particularly well on tarpon but only if they turn away with the fly so they are hooked in the corner of the mouth,” Clouser said.

He went on say that the biggest drawback to circle hooks’ popularity is with guides who can no longer scream their favorite instruction: “Set the hook!”

Proper circle hook technique is gently reeling or stripping in slack after the fish takes the bait or fly. The hook slides along the jaw and resists in the corner of the mouth. Traditional hook sets snatch the hook from the mouth.

A final Clouser tip on fishing his namesake fly pattern is what he likes to call the “Susquehanna Strip”:

“Remember, a minnow or any smaller fish doesn’t stop and say ‘Come on and eat me’ to the surrounding prey. So I never stop my flies. I’ll make a long strip and then pop it at the end so the fly material swells momentarily before darting away.”

Although retired from guiding Bob still attends some fly shows and teaches casting and fishing techniques for his many fly patterns available in his books. He represents Temple Fork Fly Rods and Renzetti vises. His TFO Clouser Series features 9-foot, 4-piece graphite rods in 5- to 10-weight sizes.

A winter evening with Bob Clouser with the Indian River only a few hundred yards away, where one of his great patterns would find many interested species, was pure pleasure. His Cocoa Beach fishing companion, Jackie Prock, assured me that Bob is getting out on the river and into the St. John’s marsh for freshwater fishing frequently. Because of water quality deterioration, he’s distressed when discussing his home Pennsylvania waters.

With apologies to actor Karl Malden, my definition of the Clouser Deep Minnow forever reads like this: “Don’t go fly-fishing without them!”