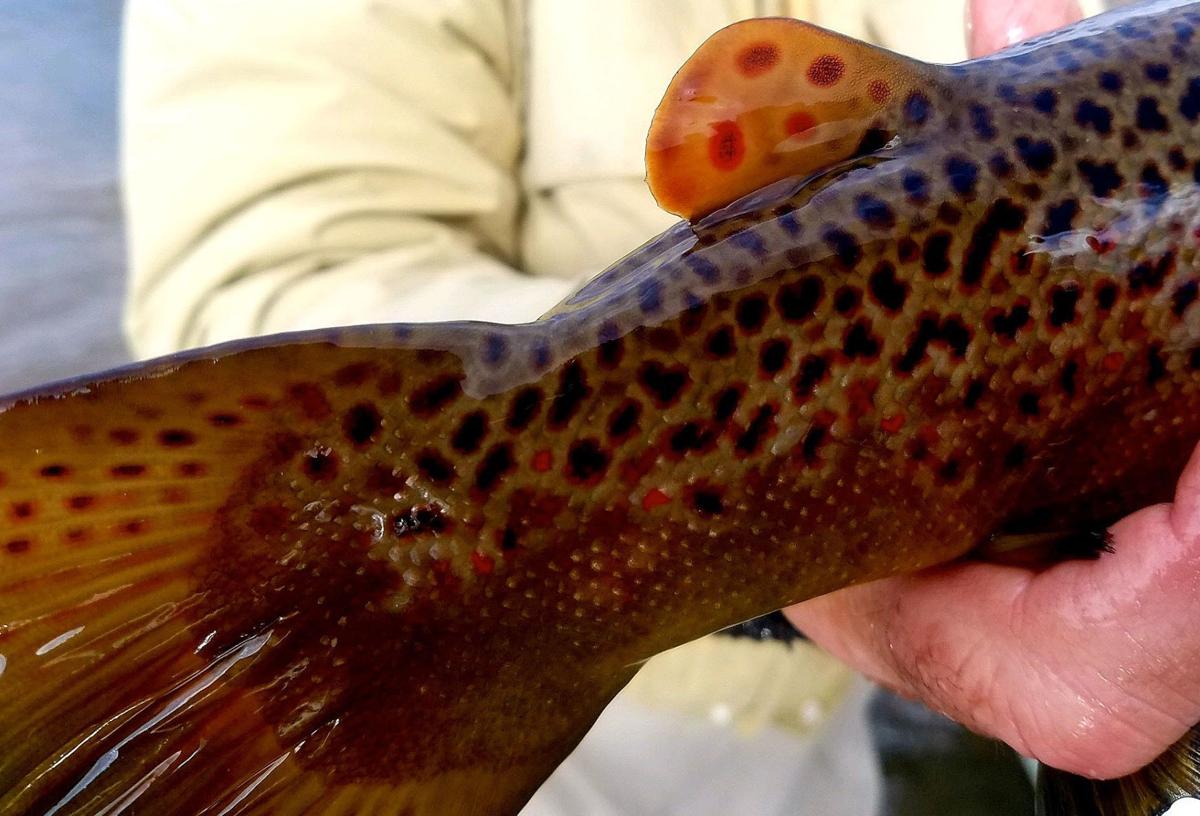 The brightly spotted adipose fin of a trophy-size October brown trout wearing his best fall spawning colors prevails as one of nature’s exceptional members. Fooling a sufficient brown continues to be an invigorating angling achievement.

Of the fascinating wild quarry I’ve encountered, plenty of which still give me fits, the brown trout occupies a tall venue.

Brown trout are wary, secretive, picky and do not suffer our bumbling.

These British Isles and German immigrants to our waters are nerve-wracking opponents and desirable trophies. Even when fooled by anglers (myself included) most browns, I suspect, are landed by accident.

My brown trout education began in 1964 when a North Carolina college kid surprised a hidden mob of silvery Linville River residents with a Muddler Minnow. The following nine falls included explorations to brown river strongholds in Montana, Idaho and Wyoming. Newspaper work brought me to Jackson in 1973.

As fall day lengths decrease (photo light period), brown trout begin the mating ritual, which traditionally sends spawning-age fish “upstream,” either from lakes into the rivers where they were raised or simply further upstream to the precise spawning gravels of their birth. Because river levels are lower in the fall, massive brown trout redds can appear as extensive plots of cleaned and freshly churned small gravel. On-site spawners are visible during the day but are more active in low light and night.

The generous folks who introduced me to fall brown trouting refused to fish over spawning redds. They cast only to fish traveling upstream.

Half a century of fall brown trout pursuit has uncovered much helpful information and an extensive equipment collection. The following thoughts include rods, lines, flies, leaders and ramblings of a brown trout addict.

Rods: For all-day casting of bulky flies, heavier lines in often windy conditions, a 9 1/2-foot in 7-weight is a favorite because more line choices are available. The extra oomph from a 7-weight, and even a heavier 8-weight, improves hook setting with bigger flies. In extra cold and windy weather, a rod with large guides is easier, especially when wiggling the entire rod underwater to swish ice out of frozen stripping and snake guides.

Leaders: Forget standard packaged 7 1/2- or 9-foot tapered leaders. Streamers that prosper by swimming underwater usually on weighted line sink better on shorter 4- to 7-foot lengths. Heavy butt sections and fine tippets aren’t necessary. And as my talented trout-o-phile guide pal Tom Montgomery repeats: “For streamers it all comes down to Maxima,” This German material is consistent for knots, abrasion resistance and overall toughness. With Maxima 8- to 15-pound tippets a fancy $8.95 streamer won’t vanish downstream in the mouth of a large spotted trophy. A sturdy loop knot to the streamer improves its swimming action.

Flies: Many pattern derivatives produce hefty late fall brown trout. A current trend leans toward giant bucktail, rabbit and craft fur imitations also suitable for musky, giant taimen, marlin and golden dorado. Such dynasties demand MLB-level casting arm ability and big hooks that leave a trail of torn trout mouths in their wake. Bigger can be better especially when male browns get aggressive and attack everything from ducks to bottom stones. My best color packages include yellow-black, yellow-brown, chartreuse-black, black-brown combos along with black, all-white and purple (especially afternoon-evening). Most of the largest browns that my flies have fooled were on size 4 and 6 2XL streamer hooks, weighted and unweighted. Unweighted flies cast easier and swim better.

Weather during many outings in Yellowstone National Park, central Wyoming, southern and central Montana and southeastern Idaho ranged from miserable to unbearable. Leaky canvas/rubber waders, bulky non-moisture-wicking insulation and too much clammy cotton turned below zero to the mild upper 30s into brutal experiences.

Starting well before sunup meant drying moist gear in a heated location. Camping produced a frozen mess, which finally demanded civilized dressing inside to dismiss stumbling about in wet snow.

Brown trout pursuit despite gruesome conditions requires mental discipline that may often appear senseless. Frozen feet, hands, ears and face are standard. Wearing gloves for casting and retrieving is hard during some conditions. My savior is keeping a pair of waterproof, insulated mittens to put on and warm up. Riverside fires, fueled duck hunter handwarmers and modern iron-filing heat packs are added salvation.

It was years before floating was fully incorporated into my fall fishing. To agree with earlier sunsets, short river segments are selected so most serious casting and fishing is done while wading.

Timing and practice are required to dispatch a distance streamer cast, hopefully not terribly hindered by sleet, wind and a high misery index. The reward arrives as a brutal, unforgettable rod yank from an unseen brawler 50 or 60 feet away.

A handsome fall brown throbbing on your tackle erases all prior distresses.

At 4:58 a.m — even before I’d read my own October 7 “Giving a helping hand to your aging eyes” Outdoors column online — a cheerful note arrived from reader Watt Dixon.

Mr. Dixon helpfully responded that he, too, suffered insufficient clarity with polarized sunglasses. He praised the solution to switch to Cocoons, a quality polarized product that fits over regular prescription glasses. I had seen this product previously but forgot to include the “fitovers” in the column. For info see CocoonEyewear.com.