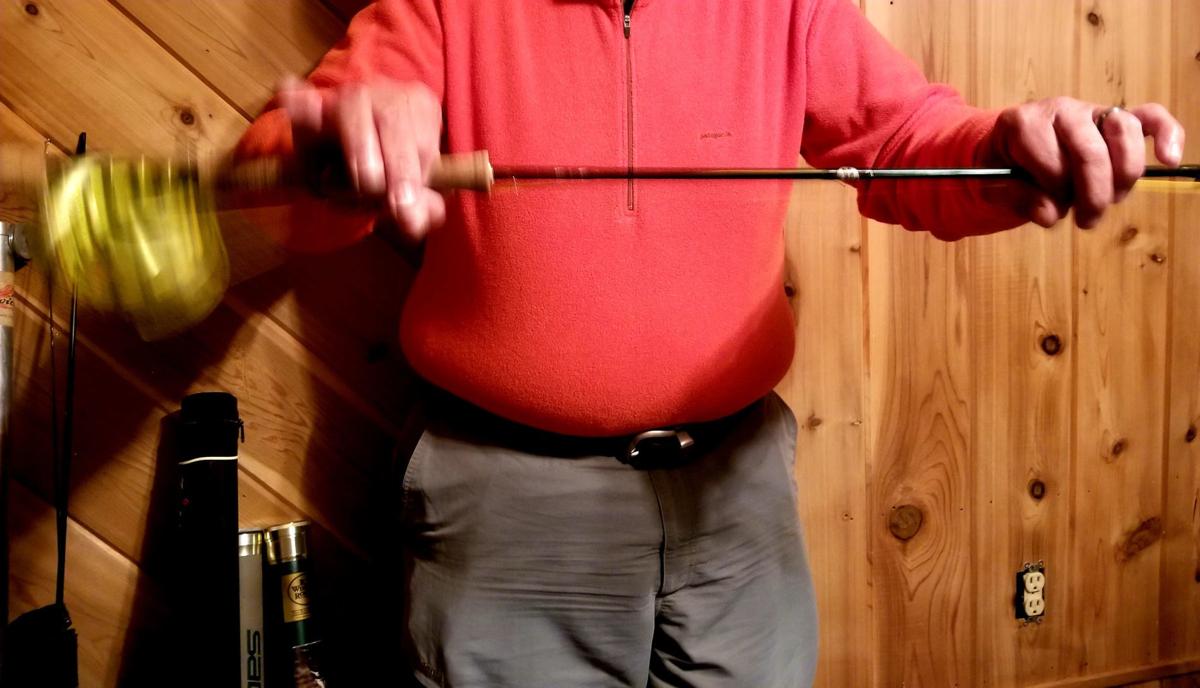 Even if an updated fly line costing between $50 and $130 (ouch) hasn’t been added to a favorite long rod recently, these suggestions will make your fishing better. I promise. And those pricey fly lines will live longer and your performance will rise above that of the average angler.

Line cleaning doesn’t need to be a major production. The moment I detect a line catching and not shooting easily, a tip sinking more than it should or a scummy surface, I strip in the working line. Use clean water to moisten a section of always handy facecloth/fish hand towel. Drag the line section (from the leader butt to running line) through three fingers gently holding the towel. Keep introducing clean towel surface area in the process. The streaks of icky black junk this effort removes will astound you.

Do this twice, the second time with a tighter finger-towel grip. In less than five minutes you’ll think you’re casting a brand new line!

This treatment improves intermediate, sink-tip, full sink and mono running lines too. I save careful cleaning and polishing with specialized dressings and pads from Rio, Cortland, Loon and SA for pre and post fishing periods.

Fly line management: The less fly line exposed while fishing, the better. Continually stomping on your costly string while wading, casting from the bank or onboard rafts, skiffs and driftboats is the perfect fly- line-wrecking recipe. Boots and sandals twist, dirty and torture exposed lines as well as crushing them with fine silt, sand, brush and rocks. Force yourself frequently to retrieve loose line back to the reel instead of carelessly pulling more line off for every cast. When wading is unlikely and casting without a stripping basket from the deck of a boat, ditch waffle stompers and cleated soles that will always catch line coils. Fly lines adore smooth soles.

Stretch line before fishing: Even specialty temperature-designed fly lines behave badly in extreme hot and cold. Before beginning a fishing day and soon after completing the above cleaning step, have a partner hold the fly line tip and walk away the distance to be used for the day’s casting and fishing. Point the rod at the line holder, firmly secure the reel and using modest tension slowly stretch the fly line. Repeat stretches several times.

Years ago I began this procedure to straighten monofilament running lines on 30-foot fast-sinking shooting heads. This is invaluable not only with single mono-core tropical lines but with softer trout lines designed for cooler temperatures. A clean, straightened line doesn’t tangle as much.

But too often leader tippet is tightly wound on the spool when the reel is stored after use. Pulling the flush leader end from the spool regularly lets the hard-to-see-tippet slide over or under some stored line. This disaster in the making won’t be revealed until too late since the hidden mobile tangle slides easily backwards through the slicker, wider fly line. A strong running fish will drag this backlash into the much smaller diameter backing that suddenly tightens. POW! The leader breaks and the fish is gone.

Remove the tangle by creating some line slack. Detach the reel spool and slip it between the offending backlash loops until the twists are removed.

Loosely reel line: After cleaning and stretching, avoid returning fly line tightly to the reel. Don’t erase the just-completed stretching benefits. Instead, lightly guide the fly line on the spool. It will need minimal straightening when casting begins. If needed, remove some backing or five feet from the rear of the fly line so the line fits comfortably on the reel.

Fixing twisted fly line: Friends are puzzled when they see me occasionally flipping my fly rod counterclockwise between my thumb and index finger loops. I do my best to keep a condensed front-to-back casting stroke but invariably I toss in spastic, roundhouse elliptical movements.

Casting errors along with other oversights, like having too much line sitting around instead of safely storing it on the reel, create twists. In heavy current, removing the fly and playing the line out to slowly untangle it is one solution. Repeating this in stillwater by trolling the empty line behind a powerboat for a while also works.

A pamphlet in each new box of Jim Vincent’s early Rio Fly Lines was the first place I ever read this handy, detailed counterclockwise line untwist solution (clockwise for lefties). In his boat at Staley Springs years ago I was delighted when expert Henry’s Lake veteran and West Coast steelhead shooting head innovator Ed Givens thoroughly demonstrated this trick.

For those who still read, “Doin’ the (un) Twist…Managing Fly Line Twist” on San Diego-based Stroud Tackle’s website carries the most understandable article available on this subject: StroudTackle.com/blog/techniques/.

The last line: The fly line world offers hundreds of climate, species and depth-specific designs and overweighted products in a mind-bending array of color combos. Lines not in use for long periods are best removed from their reels, coiled and covered. Put them in larger loops for storing.

Some time before heading to the water use a Q-tip with alcohol to clean rod guides and tips. Check and replace any line-slicing hardware.

Inspect fly reel crossbars, line guides and rings for excessive wear. The universal bad habit of beginning casting activities by repeated downward yanking of grit and silt-coated fly line from the reel (instead of a straight away pull from the spool) regularly saws evil grooves into reel housings.