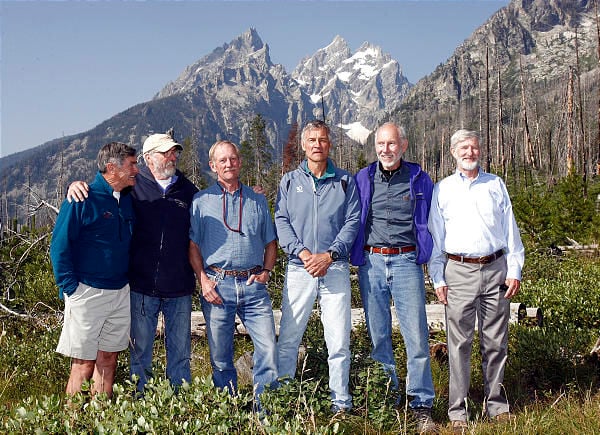 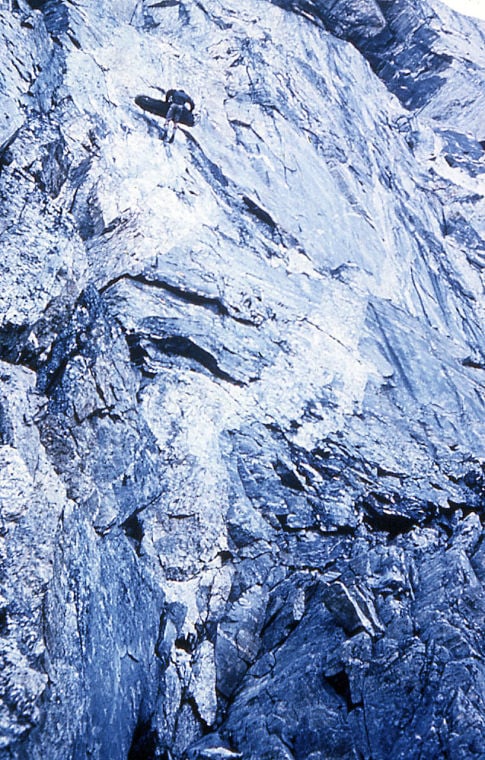 Jenny Lake climbing rangers lower a litter holding Gaylord Campbell in August 1967. The North Face of the Grand is known for rockfall, which is what made the climber fall.

The 1967 North Face rescue by Jenny Lake Rangers spawned a film, “A Grand Rescue,” became legend in Teton mountaineering and, according to the Teton Climbers Coalition, is “the most significant rescue to date” on the Grand Teton.

Lorraine Hough and Gaylord Campbell embarked on an attempt of the Grand’s North Face on Aug. 21, 1967. At the time fewer than 100 people had climbed the route. Above the second ledge that day, Campbell was on lead, roughly 20 feet above Hough, when he was struck by rockfall. It knocked him off the wall and back onto the ledge where he laid with a broken leg.

So started the three-day rescue, an operation that ended with Campbell taken out via helicopter at 4:20 p.m., Aug. 24.

A park climbing ranger at the time, Ralph Tingey first spotted the pair in the early hours of Aug. 22. Long before cellphones, the victims’ cries for help had alerted a party on Mount Owen. That party reported to Tingey with a dead-of-night rap on the door of his ranger cabin in Grand Teton National Park.

“I could see one person walking around and one person in a sleeping bag,” Tingey said of spotting the climbers the following morning with a scope. “I reported that news, so we got the rescue going pretty fast.”

Everyone from Popular Science Magazine to the Baltimore Sun got hold of Tingey for his account of the rescue, turning what he said was simply his job into a national story.

It’s a moment of climbing history that will be remembered and revisited. But it isn’t alone. A proposed addition to Phil Baux Park would commemorate events like the ’67 rescue and more with a 2,000-square-foot climbing boulder adjacent to the Teton Boulder Park to honor the contributions of the Jenny Lake Rangers to Teton climbing history.

Plans for the project include the boulder itself, but also a historical wall, which would highlight major events in the evolution of mountain rescue.

Local climbing enthusiast Christian Beckwith began digging through and compiling the historical moments a few years ago and has laid them out at TetonClimbers.com. In the proposal, which can be found at the aforementioned link, the project recounts historic events from the first rescue in 1925 to the largest rescue in park history, in 2010.

“When Paul Petzoldt took part in the first recorded rescue in Teton history in 1925, he began a legacy of climbers helping climbers that continues to this day,” the proposal reads. “Nearly 100 years later the Jenny Lake Rangers provide a system of care that modern mountaineers take for granted — one that has evolved via a series of seminal moments.

“Still comprised first and foremost of climbers, the Jenny Lake Rangers remain the ultimate backstop for our adventures in the mountains. While no climber ever wants to be on the receiving end of their professionalism and care, the comfort and relief they bring when needed is undeniable. This is our tribute to their contribution to Teton mountaineering.”

In an interview Sunday with the News&Guide, Beckwith elaborated on the idea.

“What we’re really trying to do is make sure that we honor the rangers in our community as they deserve,” he said. “A lot of us have been on the receiving end of their professionalism and their help, frankly. This is a way of saying thanks.”

The schedule and funding for the project remains uncertain, especially in the wake of COVID-19. A ranger reunion was scheduled for this summer, though Beckwith said it will likely be put off a year.

The proposal suggests the project would be a public-private partnership, much in the vein of the 2011 Teton Boulder Project erected in Phil Baux Park. Still, Beckwith insists it’s too far out to put a price tag or groundbreaking date on the proposed Ranger Boulder and historic wall.

For rangers like Tingey, though, the project has been a pleasant revisit to glory days and camaraderie built through nearly 100 years of Jenny Lake Rangers.