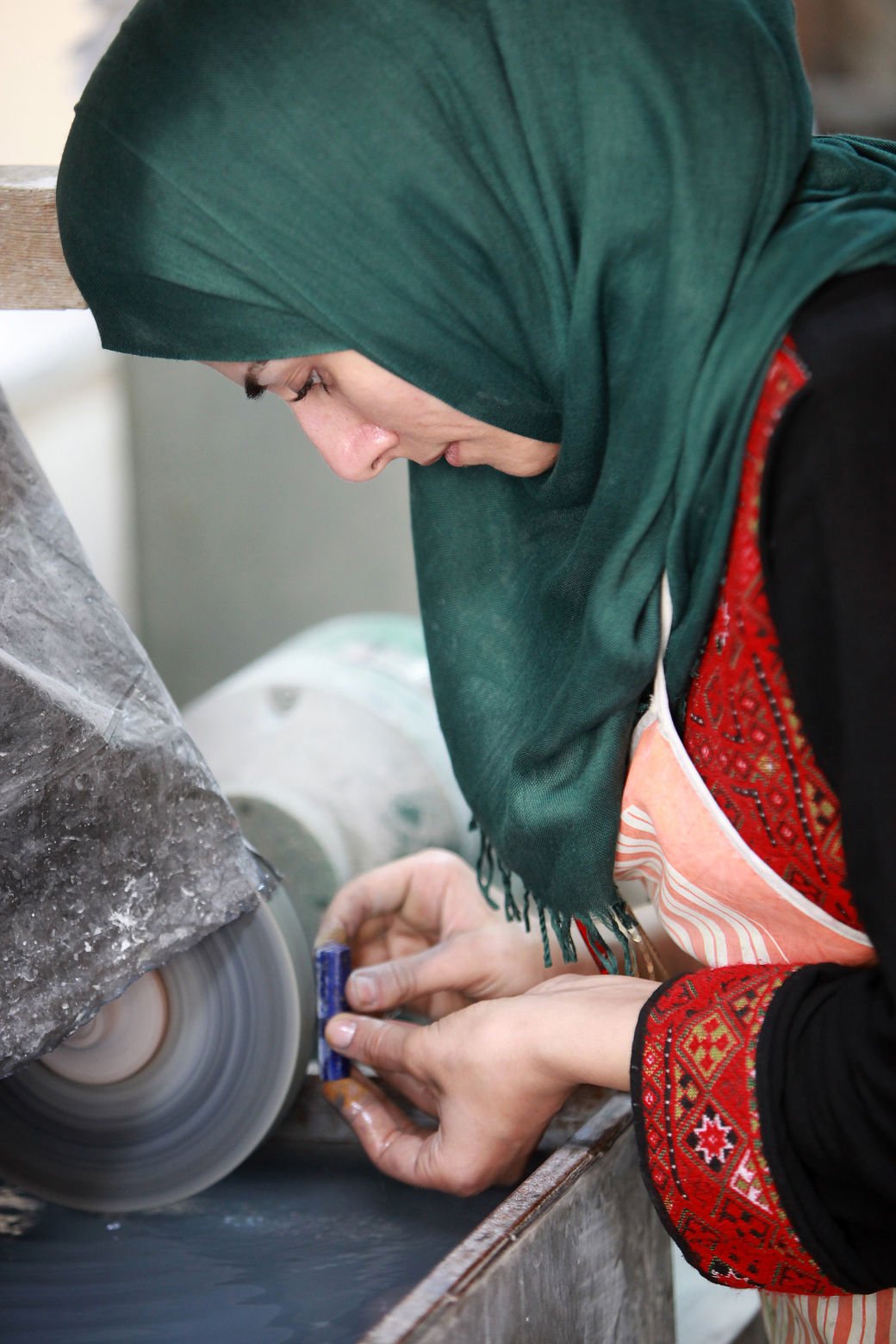 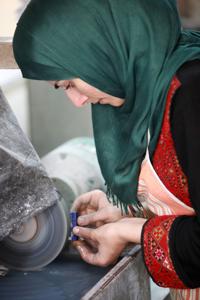 An Afghan woman learns to create jewelry from her country’s lapis mines at the Indian Institute of Gems and Jewelry. 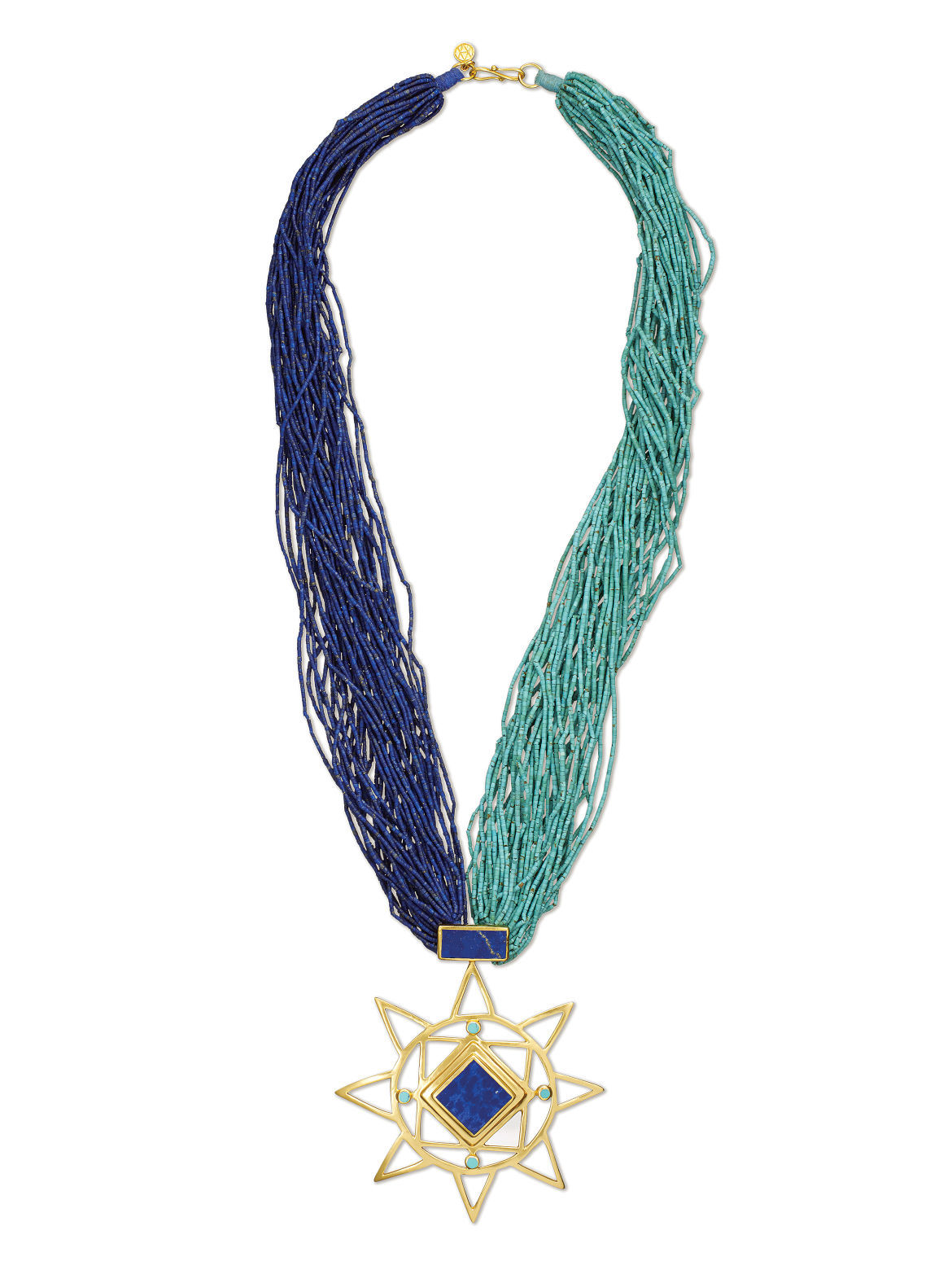 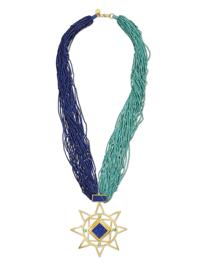 A necklace from the Aayenda Jewelry line, created by Afghan women in that war-torn country. The jewelry designs can be seen during a trunk show from 10 a.m.-6 p.m. today and Thursday at Amaran, 36 East Broadway.

An Afghan woman learns to create jewelry from her country’s lapis mines at the Indian Institute of Gems and Jewelry.

A necklace from the Aayenda Jewelry line, created by Afghan women in that war-torn country. The jewelry designs can be seen during a trunk show from 10 a.m.-6 p.m. today and Thursday at Amaran, 36 East Broadway.

All too often when people think of Afghanistan the images conjured up are of war, the Taliban, burka-shrouded women and inhospitable environs.

But the country is so much more than just bleak visions in the mind’s eye. For instance, it is home to the world’s oldest lapis lazuli mines, some dating back 7,000 years.

And from lapis and other gemstones that call Afghanistan home come beauty and, these days, hope for impoverished women.

A jewelry line called Aayenda — which means “future” in the Dari language — will be on display at a trunk show from 10 a.m. to 6 p.m. today and Thursday in Town Square at Amaran, 36 E. Broadway.

Aayenda designs are created by Afghan women and use Afghan-sourced gemstones.

U.S nonprofit Future Brilliance and its social enterprise, Aayenda Jewelry, is working to “create peace and stability in Afghanistan through job creation and enterprise development,” said its founder and CEO Sophia Swire. “In particular, to get Afghan women into the workforce.”

In 2010 Swire, a former investment banker in London, became the senior gemstones adviser to the Afghan Ministry of Mines. The job entailed inspecting gem mines to ensure their safety for workers and finding ways to involve more women.

After winning a grant from the U.S. Department of Defense in 2013, she took 36 men and women from Kabul and elsewhere in Afghanistan to Jaipur, India, for training at the Indian Institute of Gems and Jewelry.

In India the group of artisans learned about jewelry design from award-winning jewelers.

All 36 students were additionally trained to be teachers so that back in Afghanistan they could pass on their learning with the ongoing support of an international trainer supplied by Future Brilliance.

“It’s hands across the world in creation of jewelry that can be sold in the Western market,” Swire said of the Aayenda line.

“For instance, the line is carried by leading style-maker Fred Segal in Los Angeles, the most stylish store in California,” she said. “Segal’s daughter, Nina Segal, carries Aayenda in her jewelry studio.”

Jackson Hole’s Amaran is not only hosting the two-day trunk sale, but it will join Fred Segal as one of the two dozen or so retail outlets in this country selling Aayenda.

“When Sophia stopped by the store we knew right away the line would a great match,” said Sonia Tonkin, owner with her husband, Ivan. “It reflects everything Amaran stands for — helping people through productivity.

“In our opinion,” Tonkin said, “there is not a faster way for people in impoverished countries to lift themselves out of poverty than this, and when those people are led by women that is by far to us even better.”

Tonkin said she hoped that by hosting this trunk show her store’s customers “will join us on this amazing cause of helping the people of Afghanistan after so many years of war.”

Amaran carries clothing, jewelry, home decor and more that Tonkin said are all handmade by artisans.

Swire said she is thrilled that the Tonkins are doing their bit for Afghan women by hosting the trunk show.

“Jackson residents will be treated to hand-carved beads and handmade jewelry costing from $50 to $1,500,” Swire said.

Two lines from Aayenda will be on display. One is for girls from about age 15 and up, such as light little necklaces and bracelets that can be stacked.

“This line is also for women who want to look cool and young,” Swire said.

The other jewelry for sale will appeal to those age 25 and older, Swire said. It is primarily gold-plated sterling silver, with more sophisticated designs.

Since Aayenda was launched two years ago, an additional 36 Afghan jewelers have been trained, Swire said. So far about 1,200 artisans — including around 315 women — have hand-carved fine lapis and turquoise beads to create the gold-plated necklaces and bracelets.

Swire will be present at the trunk show to answer questions regarding Future Brilliance and Aayenda.

What: Trunk show of Afghan-made jewelry