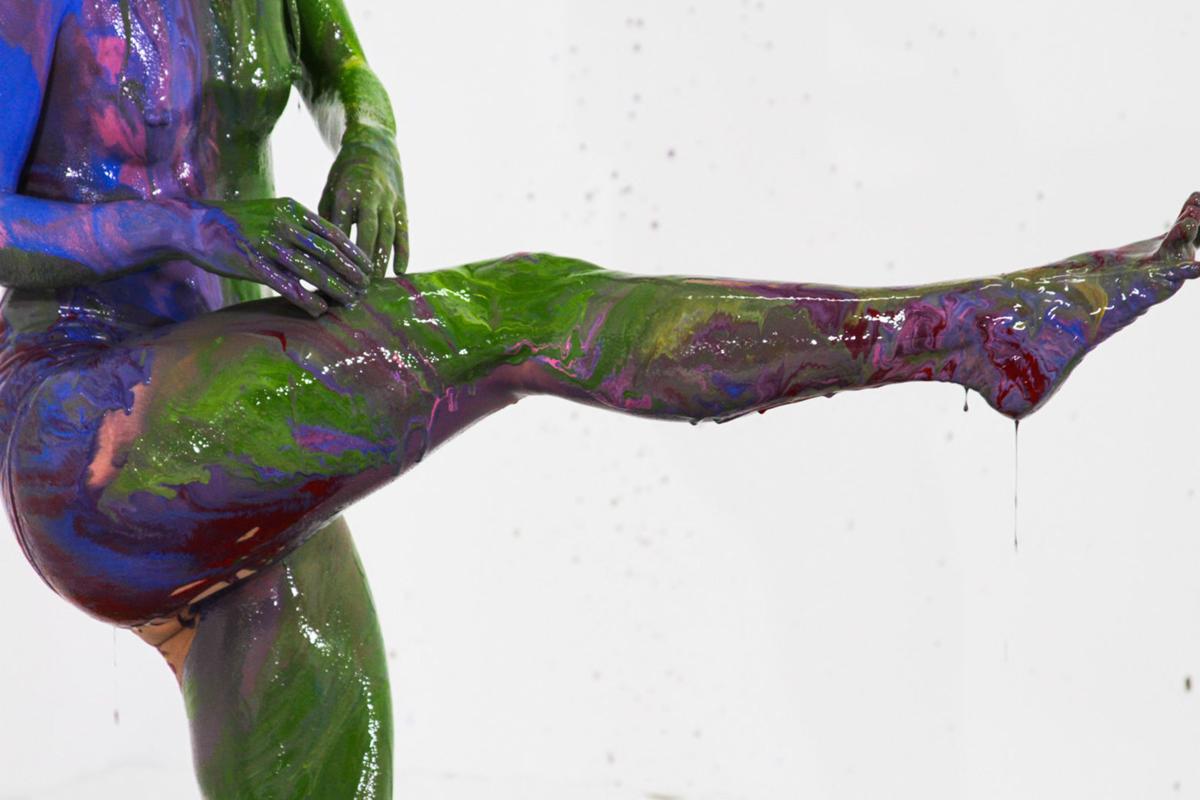 A reception and performance of Kayla Arend’s multidisciplinary exhibition Ignis Anima will be held at 5:30 p.m. Friday at the Center for the Arts. 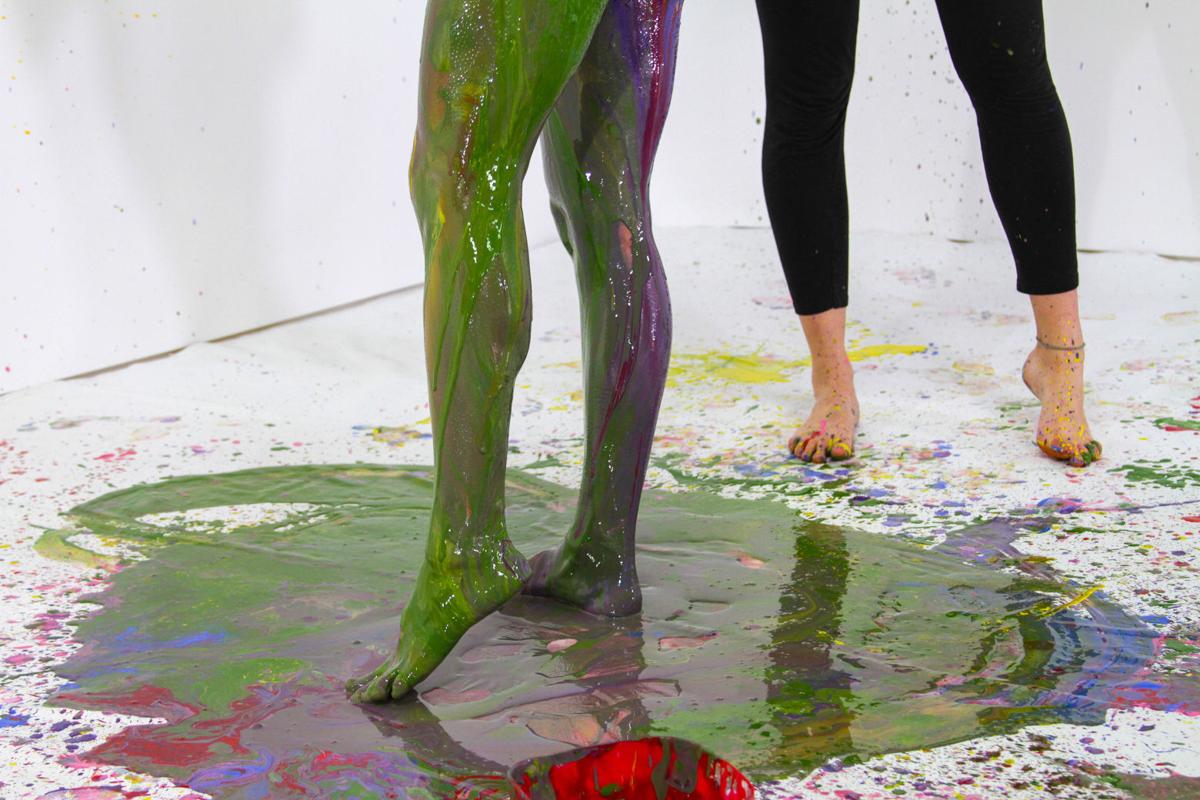 After the performance, the canvases that were danced on are dried, stretched and framed for viewing. 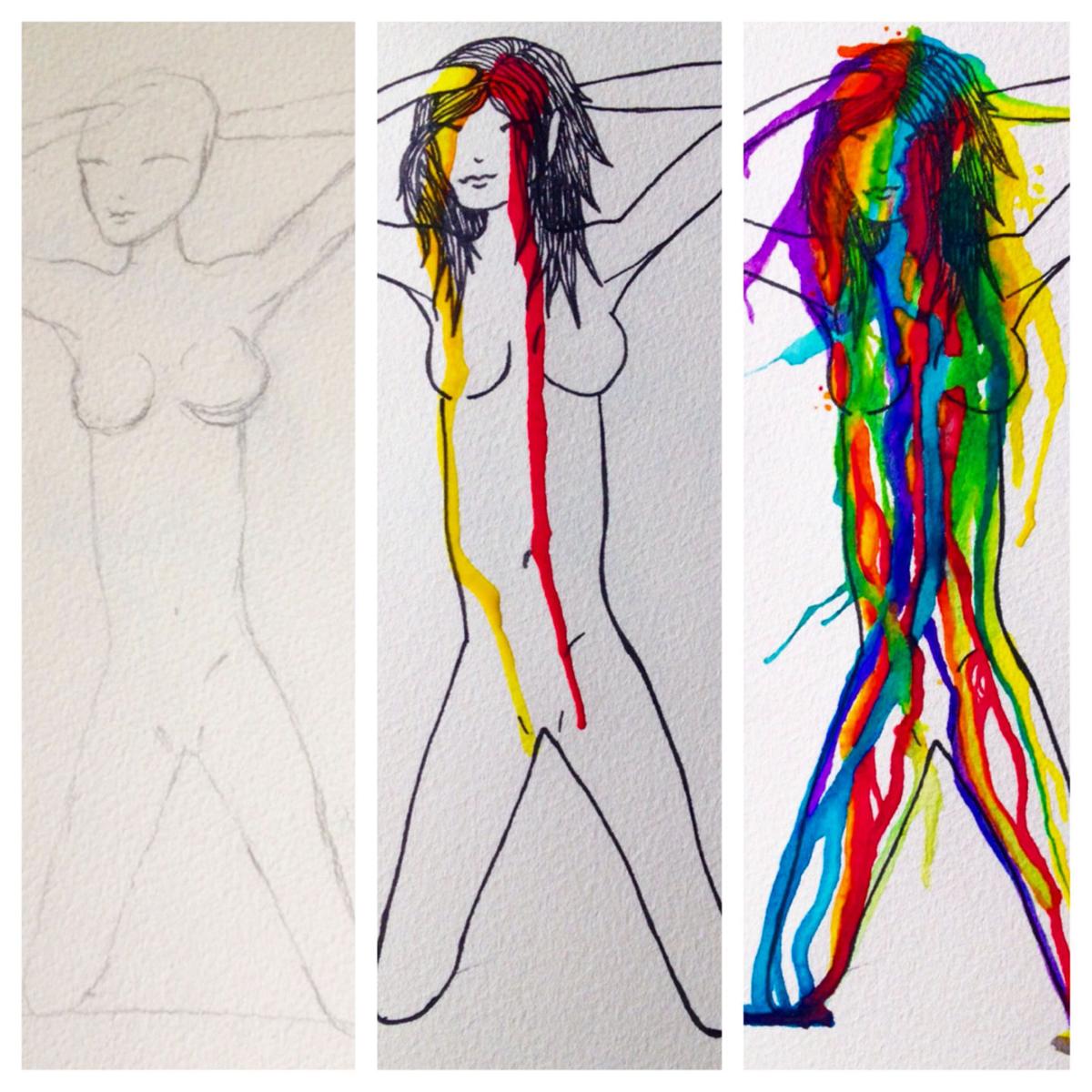 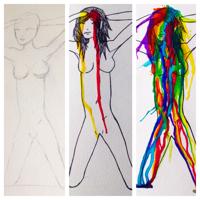 Artist Kayla Arend originally came up with the idea of Ignis Anima while watching a paint commercial. While drawing she had the vision for what it would look like performed. 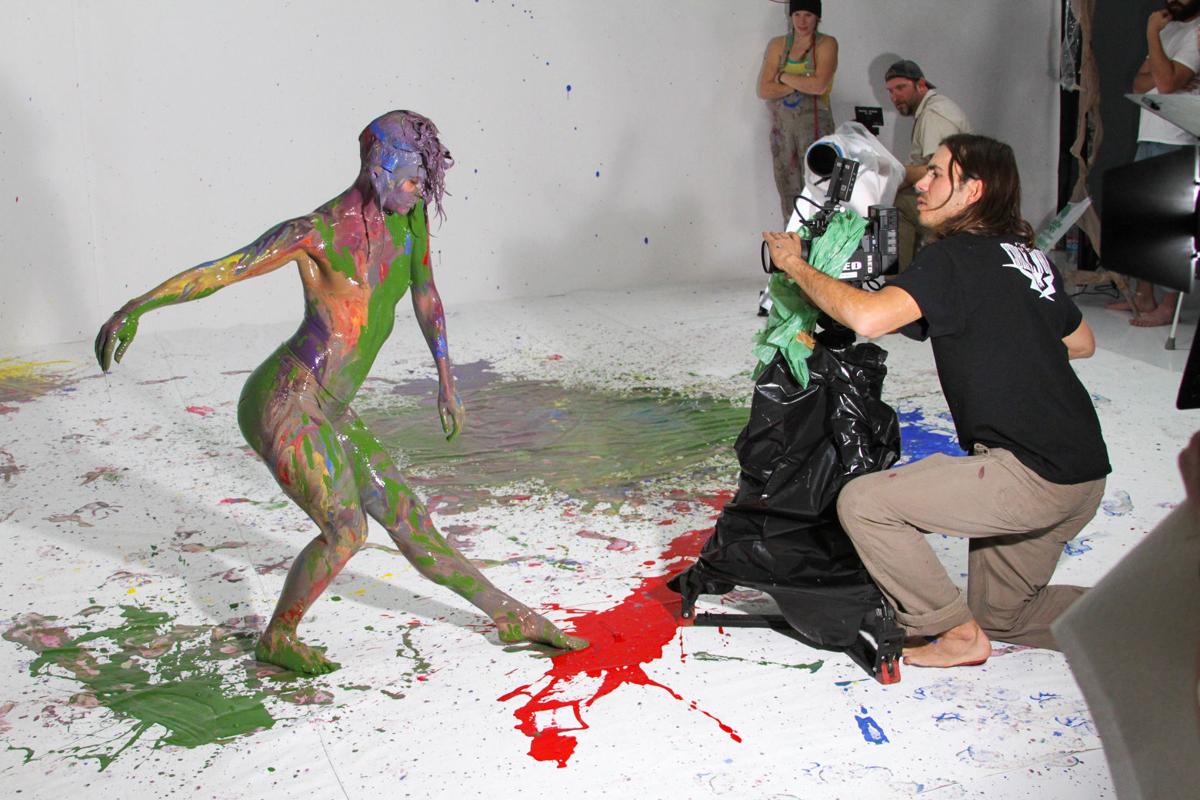 Francesca Romo dances during the filming of “Ignis Anima,” which will be playing on a loop Friday at the Center for the Arts. 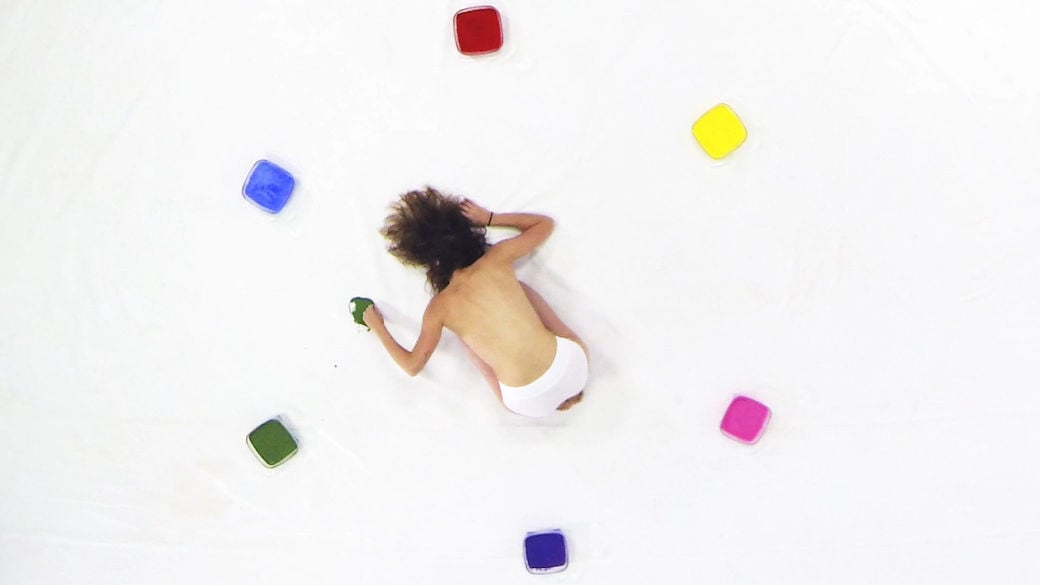 Francesca Romo starts the performance off innocent and new, before painting her life experiences on her body. 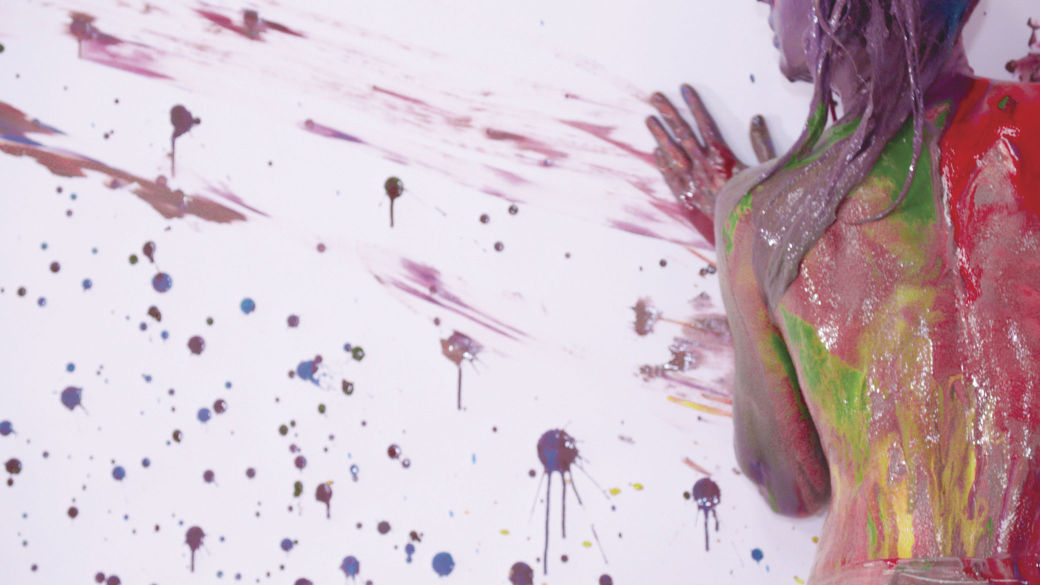 A reception and performance of Kayla Arend’s multidisciplinary exhibition Ignis Anima will be held at 5:30 p.m. Friday at the Center for the Arts.

After the performance, the canvases that were danced on are dried, stretched and framed for viewing.

Artist Kayla Arend originally came up with the idea of Ignis Anima while watching a paint commercial. While drawing she had the vision for what it would look like performed.

Francesca Romo dances during the filming of “Ignis Anima,” which will be playing on a loop Friday at the Center for the Arts.

Francesca Romo starts the performance off innocent and new, before painting her life experiences on her body.

Almost-nude bodies splashed with paint will dance to an evolving tribal score while canvases and photos line the walls Friday at the Center for the Arts.

The previously recorded film “Ignis Anima” will play on a loop. Canvases painted by dancing that were dried, stretched and framed will hang. Photos taken during the process will accompany as well. And two dancers will perform in a live, interactive performance piece.

The concept behind it all symbolizes a person’s life experiences, but breaks it down.

It’s all based on a trophic cascade, like the one you probably learned about back in middle school science class. But this is an art cascade of energy, representing a life. And in this case music inspires the dance, dance creates the painting, the painting invents the film and the film produces the photography.

“I really wanted to include art and science,” Arend said. “They aren’t married enough, I think. They rely on each other. With me it’s very much about combining those two especially in a place like Jackson Hole.”

The original idea of Ignis Anima came to Arend while watching a paint commercial. After tossing around a few ideas with a friend she sat down to draw. It started with a naked woman, and then her watercolors running down the image. And then it was born, she could imagine it all in her head, she said. She started recruiting friends and talent from the community to make it happen.

“The community collaboration on this piece has just been huge,” Arend said. “I’m forever in their debt, I owe them a lot of favors.”

They’ve stepped in when she’s been out of town, too. One of the major helpers has been Luke Zender, the choreographer and dancer in some of the live performances. While Arend is the director, producer and overall visionary of Ignia Anima, Zender helps the dancers come alive and steps in when Arend needs it. They’ve even worked on other projects together since.

“But it’s really cool because the choreographer and I, we’ve just been two peas in a pod,” Arend said.

Just last month, a live performance of Ignis Anima and a similar gallery was set in the Pink Garter Theatre. But Friday’s reception will be different. The performance will be interactive, and it will feature two dancers together.

“We don’t want anyone to see the same thing twice,” Arend said. “I’m not even sure what to expect.”

Zender will join fellow dancer Francesca Romo on the canvas-covered stage 6 p.m. Friday. The pair has shared the stage before, but on opposite sides and they didn’t interact. This time they will be on the same platform and will be able to touch and interact with each other. In the future Arend hopes to make another Ignis Anima film with a male dancer, and even one with a couple.

The hourlong dance has a loose choreography, but it will depend mainly on viewers’ participation. There will be tables next to the stage with small glasses full of paint that the audience will be able to pour on the dancers.

It’s all a study on action and reaction between the dancers and the audience, Zender said. By the end of the hour the dancers will have become something a little less human and more of an extension of the actual canvas.

“We have the ability to paint our own lives but there’s also the possibility to have our lives painted by other people’s as well,” Zender said.

In a release about the show, Arend gave more details about each component’s specific meaning within the larger whole.

“Paint is different emotional experiences over a lifespan. Dance is the perception of those experiences. Music is the historical aspect of the human condition as an idea. Film is someone else’s interaction with one’s life experiences. Photography is the impact and memory after taking in the moment. Art is the means of expression.”

There will be a talk and question-and-answer with Arend at the Center for the Arts today at noon.

People also are invited to see more images or look at past shows via Instagram; search for #ignisanima.

What: Reception and live performance art

Where: Center for the Arts

The following people were the cast and crew of the Ignis Anima film, and have been a part of some of the live performances.