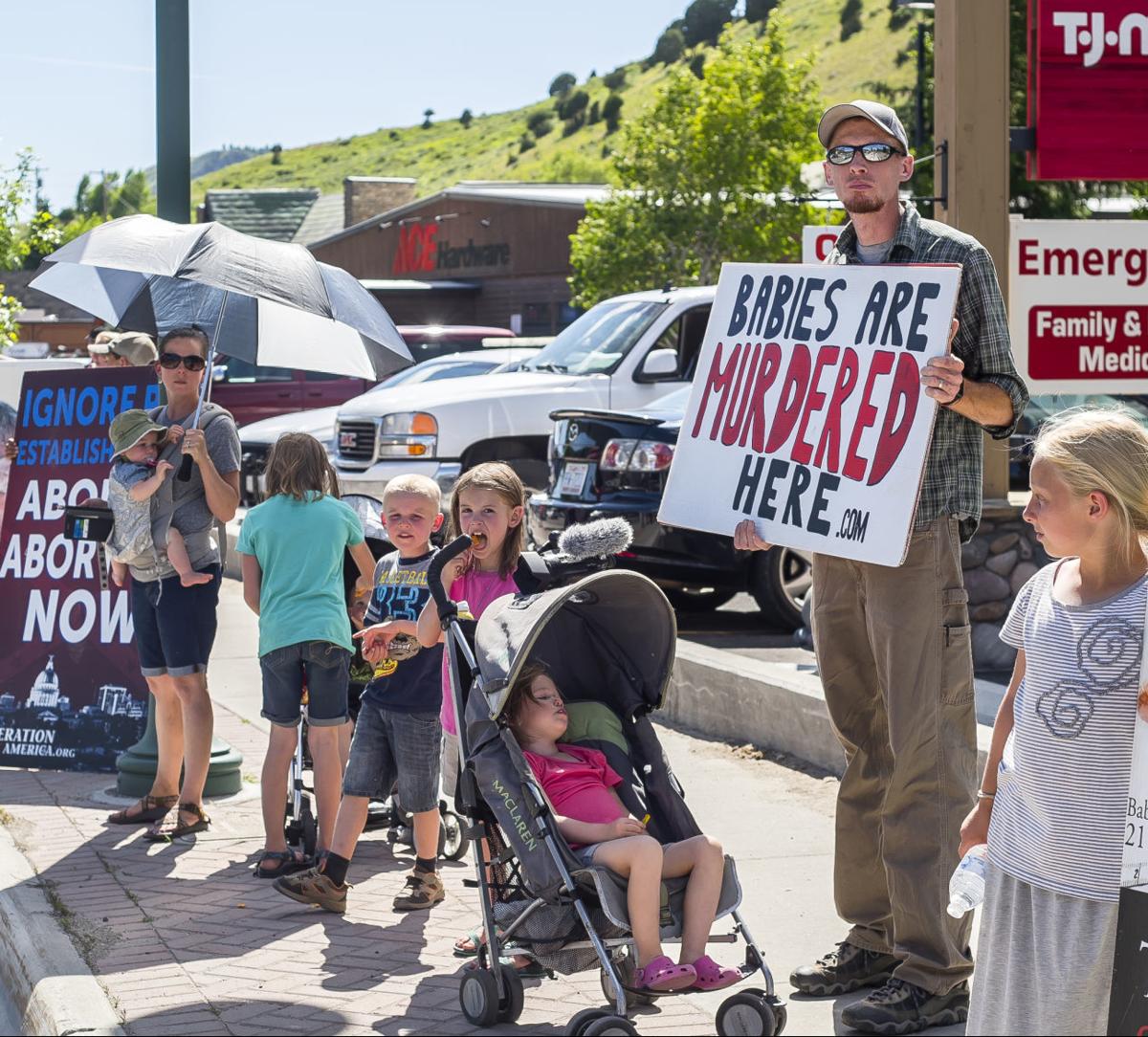 Abortion protesters from Louisiana, Mississippi, Missouri and North Carolina stand outside of Emerg-A-Care of Jackson Hole on Friday evening and demonstrate their views to passerby on Broadway Avenue. The group is traveling to abortion clinics in Montana, North Dakota, South Dakota and Wyoming to voice their opinions. 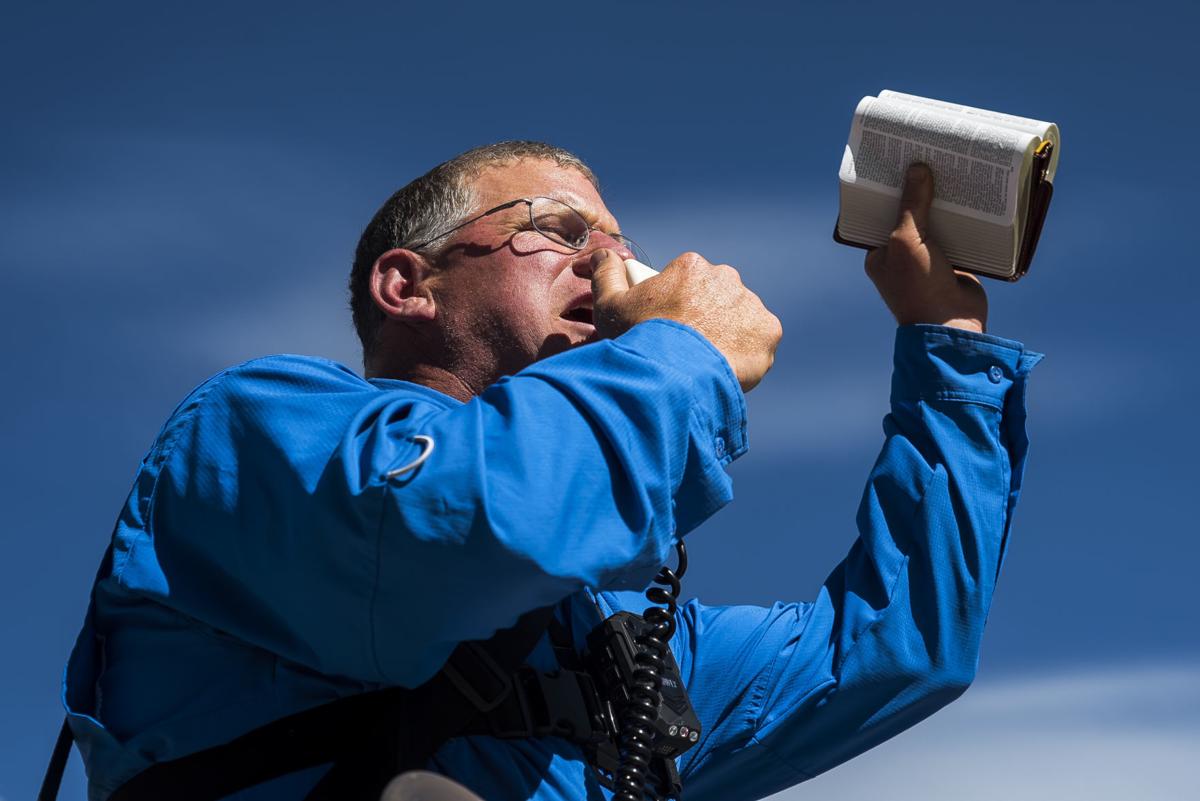 Pastor Coleman Boyd, of Bolton, Mississippi, preaches and reads from the Bible outside of Emerg-A-Care of Jackson Hole with fellow anti-abortion protesters from Louisiana, Mississippi, Missouri and North Carolina on Friday evening. The group is traveling to abortion clinics in Montana, North Dakota, South Dakota and Wyoming to voice their opinions.

Abortion protesters from Louisiana, Mississippi, Missouri and North Carolina stand outside of Emerg-A-Care of Jackson Hole on Friday evening and demonstrate their views to passerby on Broadway Avenue. The group is traveling to abortion clinics in Montana, North Dakota, South Dakota and Wyoming to voice their opinions.

Pastor Coleman Boyd, of Bolton, Mississippi, preaches and reads from the Bible outside of Emerg-A-Care of Jackson Hole with fellow anti-abortion protesters from Louisiana, Mississippi, Missouri and North Carolina on Friday evening. The group is traveling to abortion clinics in Montana, North Dakota, South Dakota and Wyoming to voice their opinions.

Anti-abortion group Operation Save America stopped in Jackson and set up on the sidewalk outside Emerg-A-Care to protest Dr. Brent Blue on Friday.

One of the protestors, clad in a blue baseball “Jesus” cap, was Cal Zastrow, of Michigan.

According to Zastrow — a self-described “slave to Jesus Christ” — the group came to “preach the gospel” outside the clinic. He and his 29 fellow Operation Save America protestors arrived just after 3 p.m. and remained there for a few hours. He said they plan to leave town Saturday.

None of the protestors outside the clinic were from Jackson. In fact, Jackson was only one stop along the group’s itinerary, which also includes clinics in Montana, North Dakota and South Dakota.

Zastrow and the group came to protest surgical abortion services that Blue offers at his practice. Blue said Friday that "the pregnancy termination part of our practice is minuscule," noting that most patients are coming for other medical services.

This isn’t the group’s first visit to town.

Operation Save America previously caused a stir by attempting to mount a similar protest on the Town Square during the 2011 ElkFest. In response, the town issued a temporary restraining order barring protests during the Boy Scout Antler Auction.

Two protestors — Mark Holick and Chet Gallagher — were arrested for violating that temporary restraining order. The charges against Holick and Gallagher were dismissed shortly after their arrest, but they claimed their First Amendment constitutional rights were violated.

Consequently, Holick, Gallagher, and their umbrella organization, Operation Save America, filed suits against the town and former Jackson Police Lt. Bob Gilliam. The suits were settled for a collective total of $275,000.

The duo and their organization also brought suits in the Wyoming Supreme Court, which characterized the restraining order as unconstitutional. The men also sued the town and Gilliam personally in Wyoming’s Federal District Court.

“We’re not here to pick fights with people, we don’t want lawsuits, we don’t want that,” Zastrow said Friday. “But if we’re denied our First Amendment rights then that may be an option. I’d just as soon not.”

When Operation Save America returned in 2012, they were met with a coordinated “ignoring with intent” campaign that much of the town embraced.

On Friday, local high schoolers, Alex Andrikopoulos and Chase Christopher, were driving by on Broadway when they saw the protestors, decided to go into the Staples across the street to buy a sign on which they jokingly scrawled "legalize recreational cocaine" to poke fun at the protestors.

"I personally disagree with them. I think women should have a choice," Christopher said. "So we're out here to try to discredit them."

Though he was younger at the time, Andrikopolous said that the last time the group was in town, he remembers his mother covered his eyes to prevent him from seeing the graphic imagery on the posters.

Macie McCormick, 17, said she also remembers a negative response when the group visited in 2011.

“I get that you can voice your opinion, but you're showing this to everybody who drives by, especially little kids. And that's just not something you show little kids."

When she saw the protestors today, she and a few friends decided to quickly make their own counter-protest signs to set up alongside the anti-abortion ones. McCormick held up a sign reading “Keep Abortion Safe and Legal” and her friend held up a “My Body My Choice Sign” beside her.

"It upset us, because it's not right,” McCormick said. “So we decided to come out here with our own posters saying it should be the woman's choice. So we're just trying to raise our awareness, because theirs is not what we believe in."

Blue said that when he arrived at the clinic that day protestors were not present but were there when he left. Blue’s policy in response to protestors is simply to “continue to provide healthcare to women.”

Now 14 comments and still kept off the "most commented" tab. Trying to justify murder isn't as popular as it use to be????

Hi, Chad. We appreciate you pointing this out. I looked into why this story isn't coming up on the "Most Commented" tab that you are referring to. The story was published on the Hole Scroll app, our newest publishing method for "digital fast" stories – timely stories we desire to distribute quickly as news is breaking. At this time, the "Most Commented" tab only draws from stories published in the Jackson Hole News&Guide and Jackson Hole Daily, which are the most in-depth and complete news and feature sources. We'll discuss this to see if that's something that can be and should be changed in the website programming. - Cindy, Audience Engagement Producer

I am so sorry you had to put up with people from our state of Mississippi invading your town and causing havoc. We unfortunately have to put up with the crazy people all the time around our state.

Ms. Peabody This town is "invaded" 6-9 months out of the year by far worse than some concerned families from the South. They caused no "havoc" whatsoever.

Strange, this story will have 8 comments after this one and it hasn't shown up under the "most commented" tab?????

Jackson loves a good protest. I always ask the same question, what do these protesters do for work. I can see that guy in the picture has a lot of mouths to feed. Shouldn't he be concerned about making a better living for them?

The children dont look neglected, malnourished, poorly dressed. They are on a summer road trip across the country, how much of a better "living" do they need?

These poor kids are being raised on the sidewalks of abortion clinics with no real schooling or interaction with real kids. It is sad...

Do you know these families personally??? If not, you have absolutely no idea what you are talking about.

Their work revolves mainly around suing everyone to fund their lifestyle unfortunately.

Dr. Blue should invite these students inside to witness a "pregnancy termination" firsthand.

The pro-abortion crowd always are the most offended when confronted with the result of a "choice"...… A dead human being.

The glaring TRUTH often offends those believing a lie.

Pro- "choice" to end the LIFE growing inside you. The godmother of the AmeriKan abortion movement was Margaret Sanger, a Racist that openly called for the killing of "lesser" races unborn to eventually wipe them from existence. Her Eugenics ideals were Identical to Hitlers.