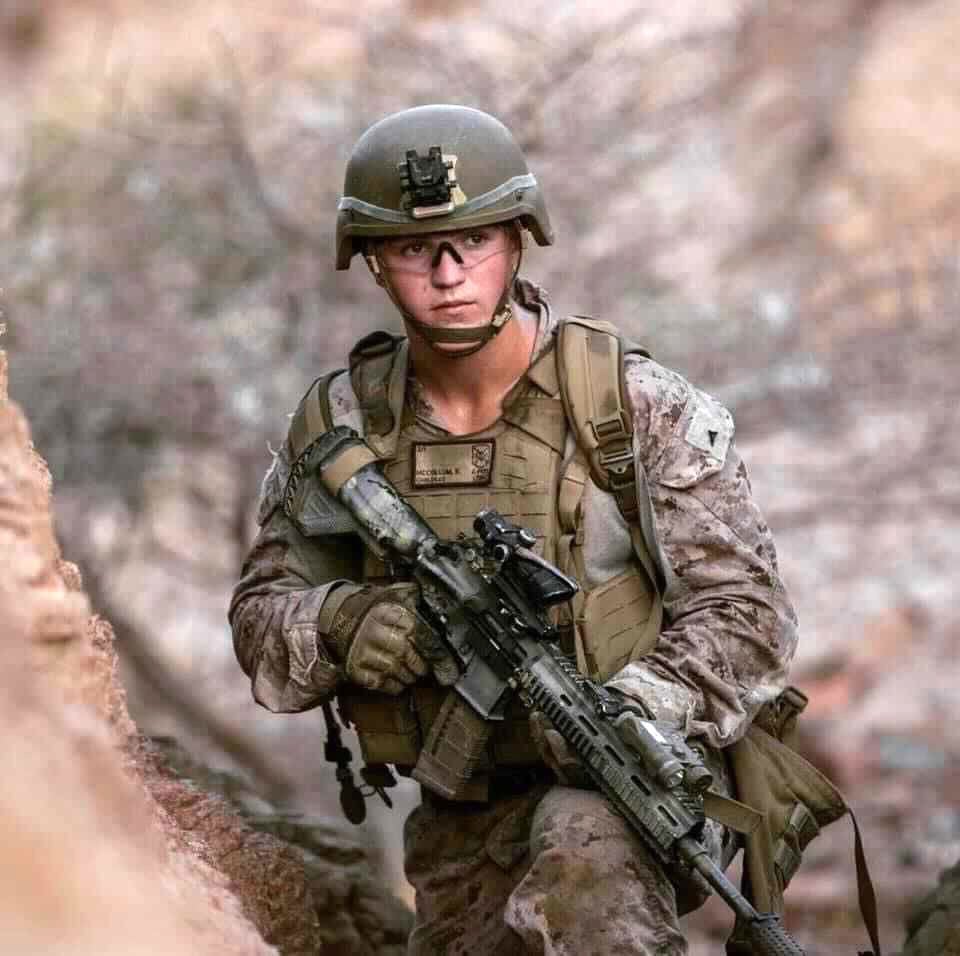 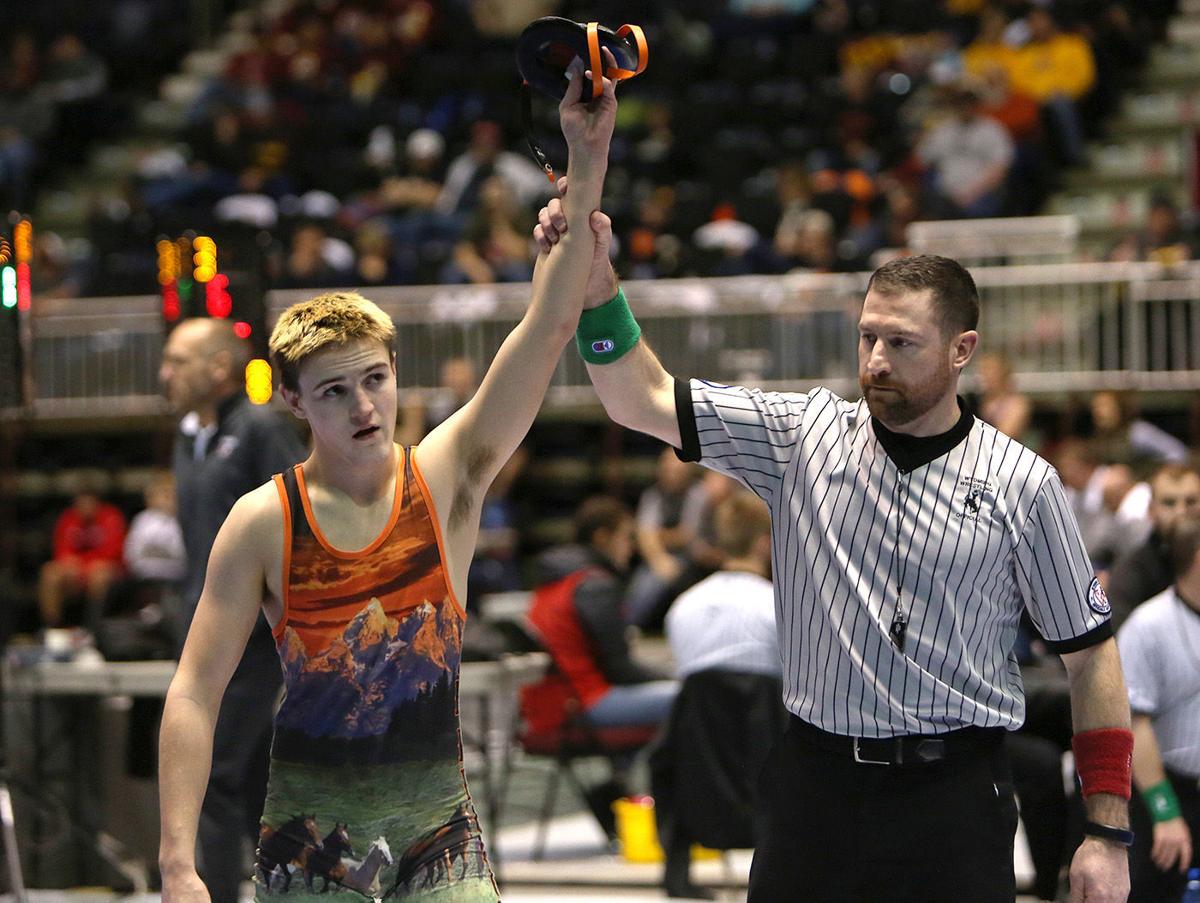 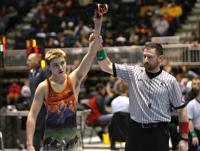 Jackson’s Rylee McCollum is declared the winner in his bout against Isaac Polomo of Natrona County during a 126-pound 4A match in February 2018 during the Wyoming high school state championships in Casper.

Rylee McCollum, a former Jackson student and wrestler, was one of the 11 U.S. Marines killed in Afghanistan after a suicide bomber attacked Hamid Karzai International Airport Aug. 26.

McCollum, 20, who graduated from Summit Innovations School after attending Jackson Hole High School, was also a brother, son, friend, husband and soon-to-be father to a baby due in three weeks.

He died after a suicide bomb blew up as Western forces were evacuating thousands of people out of Kabul on dozens of military cargo aircraft flights. Also killed were a U.S. Navy sailor, a U.S. Army soldier and some 169 Afghans.

“I’m devastated to learn Wyoming lost one of our own in yesterday's terrorist attack in Kabul, Afghanistan,” read a press release issued by Gov. Mark Gordon. “Our thoughts and prayers are with the family and friends of U.S. Marine Rylee McCollum of Bondurant. Jennie and I, along with all of Wyoming and the entire nation, thank Rylee for his service.”

Gordon announced all American and Wyoming flags in the state would be flown at half-staff through Aug. 30 in honor of McCollum.

In a response to the attacks, Pres. Joe Biden said to the grieving families, “My heart aches for you, and I know this: We have a continuing obligation, a sacred obligation to all of you, the families of those heroes. That obligation is not temporary. It lasts forever.”

McCollum was supposed to come home at the end of September, according to his sister Roice McCollum, who added that her brother signed up to join the military the day he turned 18.

“He wanted to be a Marine his whole life and carried around his rifle in his diapers and cowboy boots,” she wrote to the News&Guide. “He was determined to be in the infantry and this was his first deployment.”

In his last conversation with his sister, about a month before he died, McCollum talked about wanting to see the cabin the family was working on when he returned to Wyoming, she said. He also expressed his nervous excitement to become a father with his wife, whom he married just before his deployment.

When McCollum finished serving his country, he planned to work as a history teacher and coach, his sister said.

“He wanted to be a wrestling coach and help change other kids’ lives like it changed his life,” she said. “To his friends and teammates and coaches, he was family. Rylee will always be a hero not just for the ultimate sacrifice he made for our country but for the way he impacted every life around him for the better.”

Hundreds of people shared their condolences with McCollum’s loved ones on Facebook, who shared the news of their loss.

One comment read: “Damn this hurts a lot, he was one of my good friends in bootcamp and even outside of the military, I send my heart out to you guys.”

Another read: “I can’t take this. He’s been in our home so many times and was one of my sons best friends. I’m so sorry.”

These thoughts were echoed by State Superintendent of Public Instruction Jillian Balow, who issued a statement in a Wyoming Department of Education press release.

“Saying that I am grateful for Rylee’s service to our country does not begin to encapsulate the grief and sadness I feel today as a mother and as an American,” Balow wrote. “My heart and prayers are with Rylee’s family, friends, and the entire Jackson community.”

Wyoming Senators John Barrasso and Cynthia Lummis each released statements regarding McCollum. Lummis said in a statement: “Rylee sacrificed his life in service to his country and to the brave Afghans who partnered with us during our mission in Afghanistan. His sacrifice will not be forgotten.”

“I certainly hoped we would never have to add another name with KIA behind it to our monument on the square,” Burke said.

Burke said the Legion would offer to be a part of Honor Guard services for McCollum. He also noted that he’s not used to offering those services for people as young as the former Jackson student.

“It's always older people that we do these for,” he said. “Not the young ones.”

Burke was one of the hundreds of Jackson locals hearing about and reacting to the news of the local Marine’s death.

“Things are distant when you're watching TV or picking up the newspaper, but then when it's this close to home, the reality sets in of how close we all are,” Burke said.

Wyoming Congresswoman Liz Cheney (R-WY) issued the following statement: "I want to offer my deepest condolences to Rylee McCollum's family and loved ones. His bravery and patriotism will never be forgotten. His willingness to put himself in harm's way to keep our country safe and defend our freedom represents a level of selflessness and heroism that embodies the best of America.”

McCollum’s sister Roice said her family will likely get his remains on Monday. Funeral plans will follow.

She invites people to reach out to her for the funeral, and to join the family as they grieve their loved one.

“I know it would mean a lot to him to know how many people really cared about him.”

The Jackson Hole Community Counseling Center at 307-733-2046 is available to provide counseling and mental health services for anyone in the community who would like support.

So sorry to hear this brave young man will not be coming back to his sweet Wyoming home. My prayers go out to friends and family, especially for his young wife as she faces childbirth in the midst of profound grief.

A true hero and patriot. Rest in peace. Please share information on where we can donate or what we can do to help the family.

So sad. Rest in peace. Hero.

So sorry for this loss. May God bless and comfort family and friends grieving the loss of this American hero.