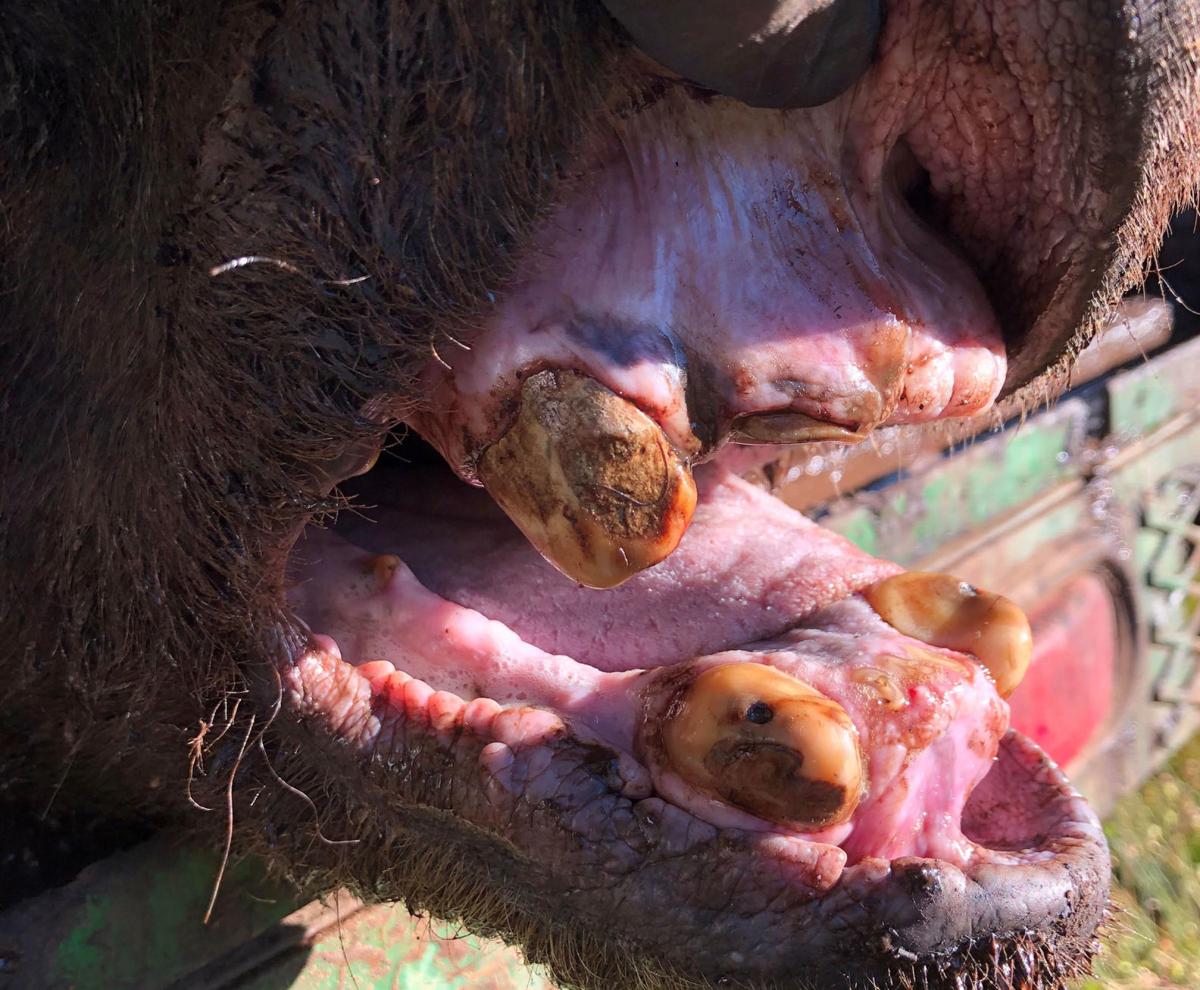 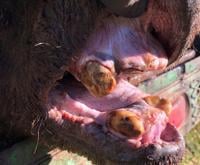 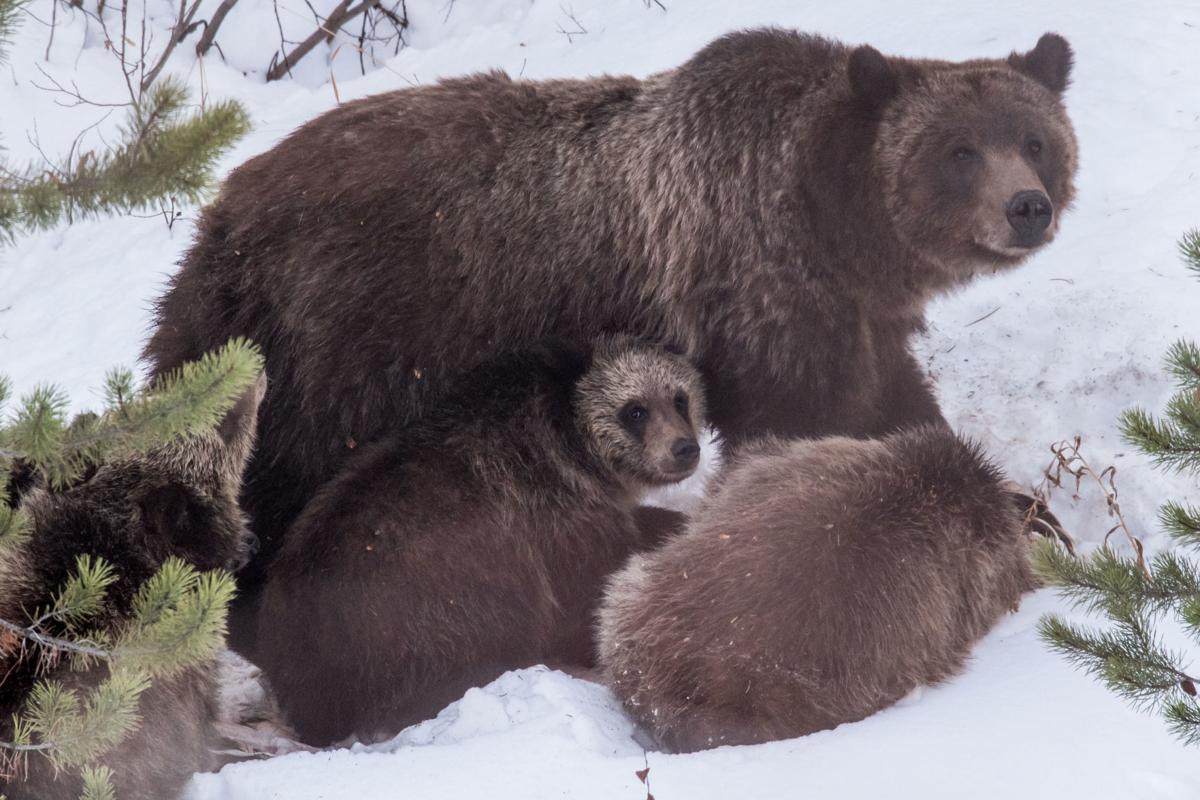 Grizzly 399 and her four cubs feed on a deer carcass last November in southern Jackson Hole. The famous grizzly, known for raising her cubs in Grand Teton National Park, will be 25 this spring and is approaching advanced maternal age.

Grizzly 399 and her four cubs feed on a deer carcass last November in southern Jackson Hole. The famous grizzly, known for raising her cubs in Grand Teton National Park, will be 25 this spring and is approaching advanced maternal age.

Zach Turnbull could barely make out the emaciated grizzly bear’s inside-lip tattoo, and when he did decipher the digits — 168 — they just didn’t seem right.

The Pinedale-based large carnivore biologist dialed up his boss, Dan Thompson, to make sense of a tranquilized animal that seemed to somehow span careers and trace all the way back to the Reagan administration.

“He was like, ‘Hey, ah, how old do bears live?’” Thompson remembers of the exchange. “We started talking about it, and he’s like, ‘I am sure that this bear I have, based on everything I can find, is 34 years old.’ ”

A check of a federal grizzly bear dataset confirmed the news. Remarkably, Grizzly 168 is, so far, the oldest grizzly ever documented in the tri-state Greater Yellowstone Ecosystem. The bear, in fact, lived as long as any grizzly on record in North America, though closely related coastal brown bears have bested that longevity in the wild — as has a Minnesota black bear.

“He was born in 1986,” Thompson said. “That’s pretty wild to think about. I think I was in junior high. I know it was the year before [Guns N’ Roses’] Appetite for Destruction came out.”

The number tattooed inside the grizzly’s mouth hinted at his extraordinary age. Those digits — assigned to bears captured in the ecosystem — are sequential. Nowadays, most grizzlies that end up in traps because of conflicts or for research have numbers in the six, seven, eight-hundreds or even higher — they go well beyond a thousand. In 2019 the oldest bear that ended up in an Interagency Grizzly Bear Study Team trap was ink stained with No. 394, an old male captured for research in Yellowstone’s Antelope Creek area.

That explains Turnbull’s initial confusion in the summer of 2020. The one-hundred-something bears are relics of yesteryear, animals from an era when grizzlies were more concentrated in the Yellowstone region’s core.

Indeed, when the late 34-year-old bear was captured, collared and assigned “168” as a 180-pound, 3-year-old in the Pacific Creek drainage in 1989, it was even before two infamous Togwotee Pass cattle killers (Grizzlies No. 203 and No. 209) registered on bear biologists’ radars.

Read the full story in this week's edition of the News&Guide. Support community journalism and subscribe for just $1 a week.

On New Year's Day, Grizzly 399 passed out of sight as she headed toward her den. Four chubby cubs padded along behind their fattened up mama.

When the storied sow emerges this coming spring, she’ll be of an age that most silvertips start to decline.

Once female grizzlies reach adulthood, they’re great at staying alive. Aggregating data from hundreds of females captured across the Greater Yellowstone Ecosystem over decades, Interagency Grizzly Bear Study Team leader Frank van Manen has found that survival for an individual adult is about 95% in any given year.

“It basically stays that high for a long time, into their mid-20s,” van Manen said. “Then it kind of precipitously drops down.”

Grand Teton National Park’s most well-known wild resident this year will turn 25, the age most grizzlies start to have a tougher time. Already, Grizzly 399 is the oldest female grizzly with cubs known to be alive in the ecosystem. Although she’s aged to near the typical threshold for decline, biologists like van Manen and the Wyoming Game and Fish Department’s Dan Thompson have not noticed any indications that the famous bruin is deteriorating.

“Of all the videos and photos I’ve seen, she looks good,” Thompson said. “She’s a unique individual in that most grizzly bears with cubs try to go to the den early.”

Grizzly 399, he added, has carved out her own niche, staying out on the landscape into the winter, taking advantage of the calorie-rich remains from cow elk hunts in Teton Park and on the National Elk Refuge.

Van Manen agreed that 399’s life history is relatively unique, though he added there are similar bears in the backcountry that lack the fanfare.

“Grizzly 399 is the prime example of a really smart and experienced female that knows how to raise cubs, knows where to find resources and, frankly, knows how to stay out of trouble,” he said.

There’s a “very low” probability that Grizzly 399 would manage another litter of cubs, van Manen said. Likely, that possibility wouldn’t come until 2023, when she’d be 27 years old and one year out from casting off her current brood.

“But it is a possibility,” van Manen said. “She’s a big, healthy female [who is] certainly on the far side of the bell curve in terms of female body weight.”

Some of Grizzly 399’s most outspoken fans have an optimistic outlook for her twilight years.

“I think she’ll have another litter, of course,” wildlife photographer Tom Mangelsen said. “It’s 399, you’ve got to take that into account. She is extraordinary.”