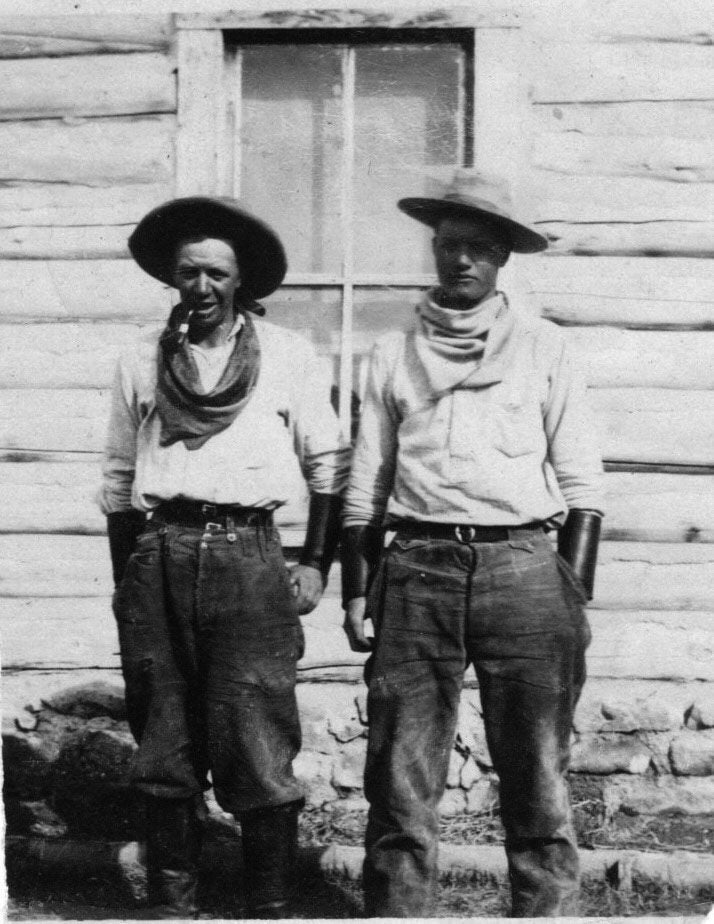 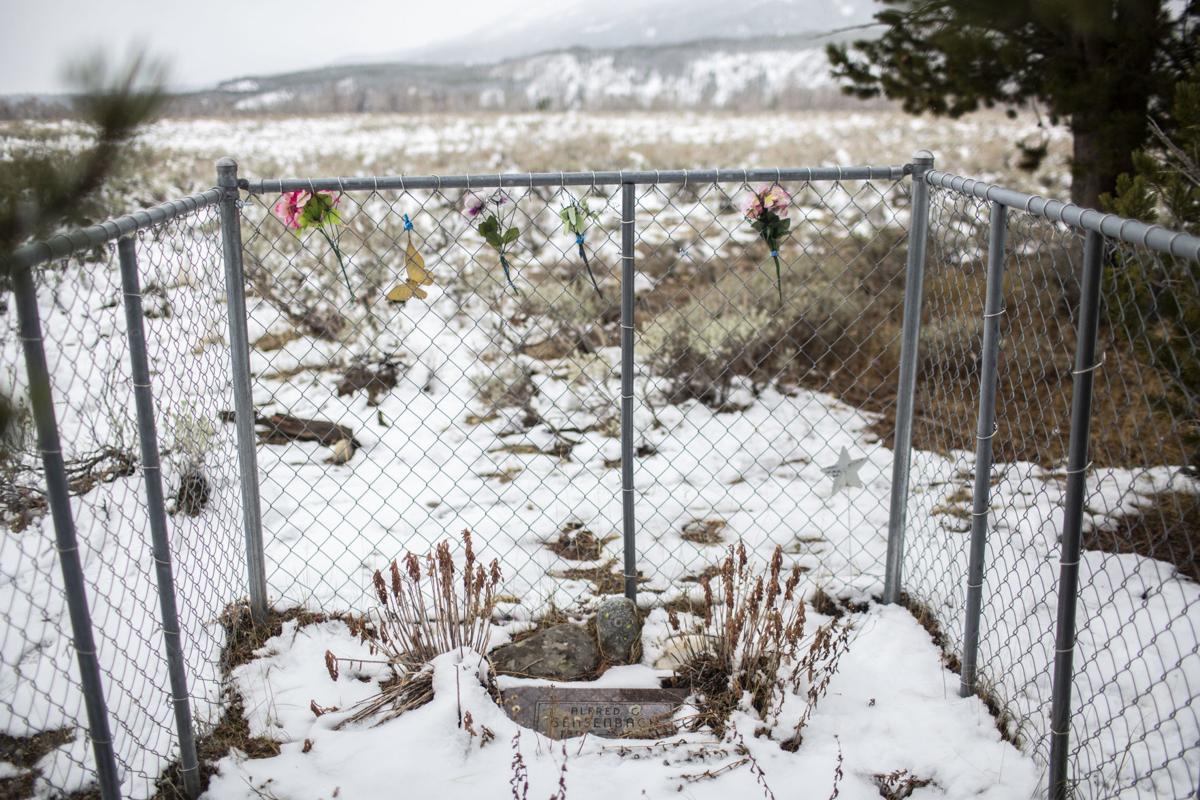 The grave of Alfred G. Sensenbach, who died in 1918, sits at the western foot of Timbered Island in Grand Teton National Park. 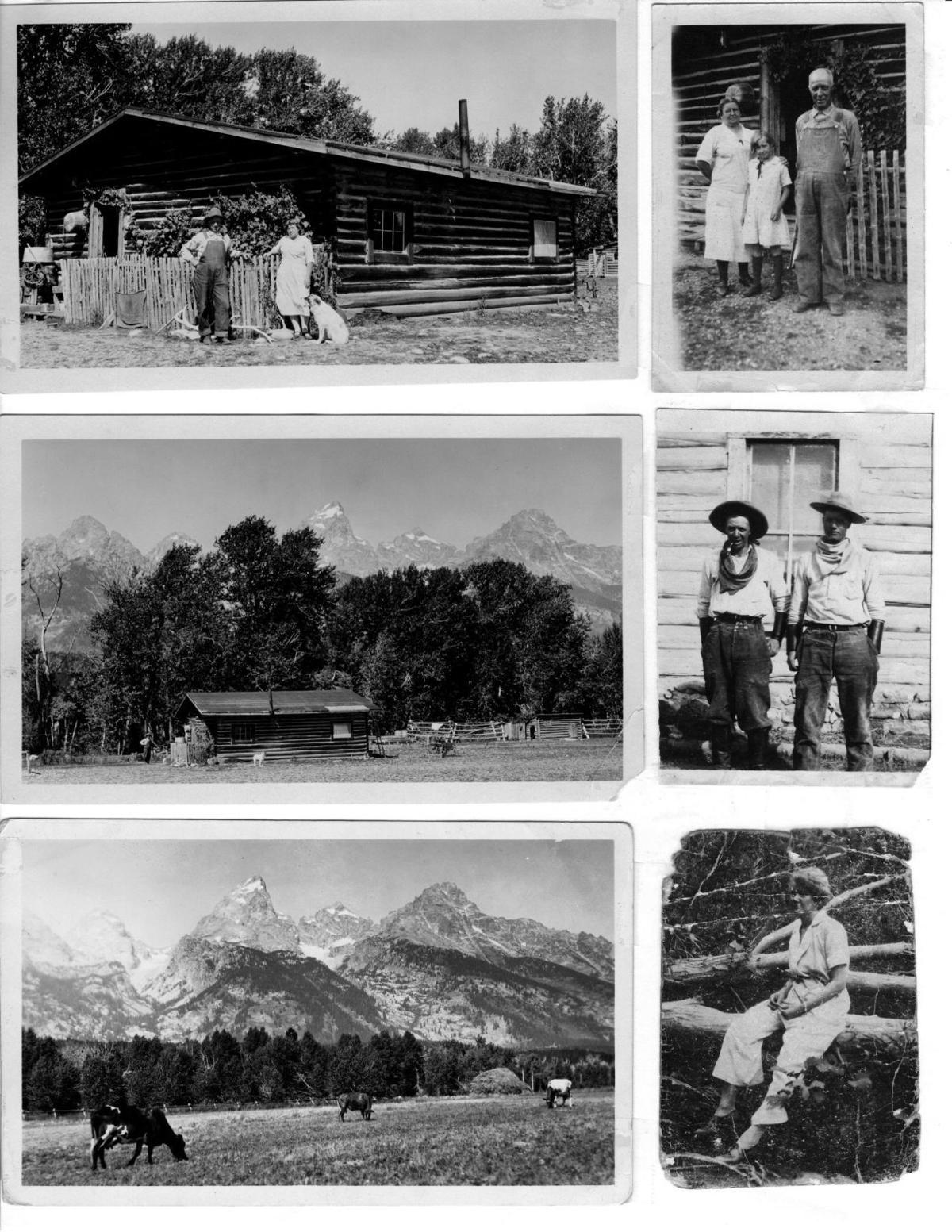 The three photos at left show the Sensenbach homestead and above, Dad and Ma Sensenbach with their granddaughter, Mildred. Below, Lauretta Sensenbach sitting on a fallen tree on the homestead. 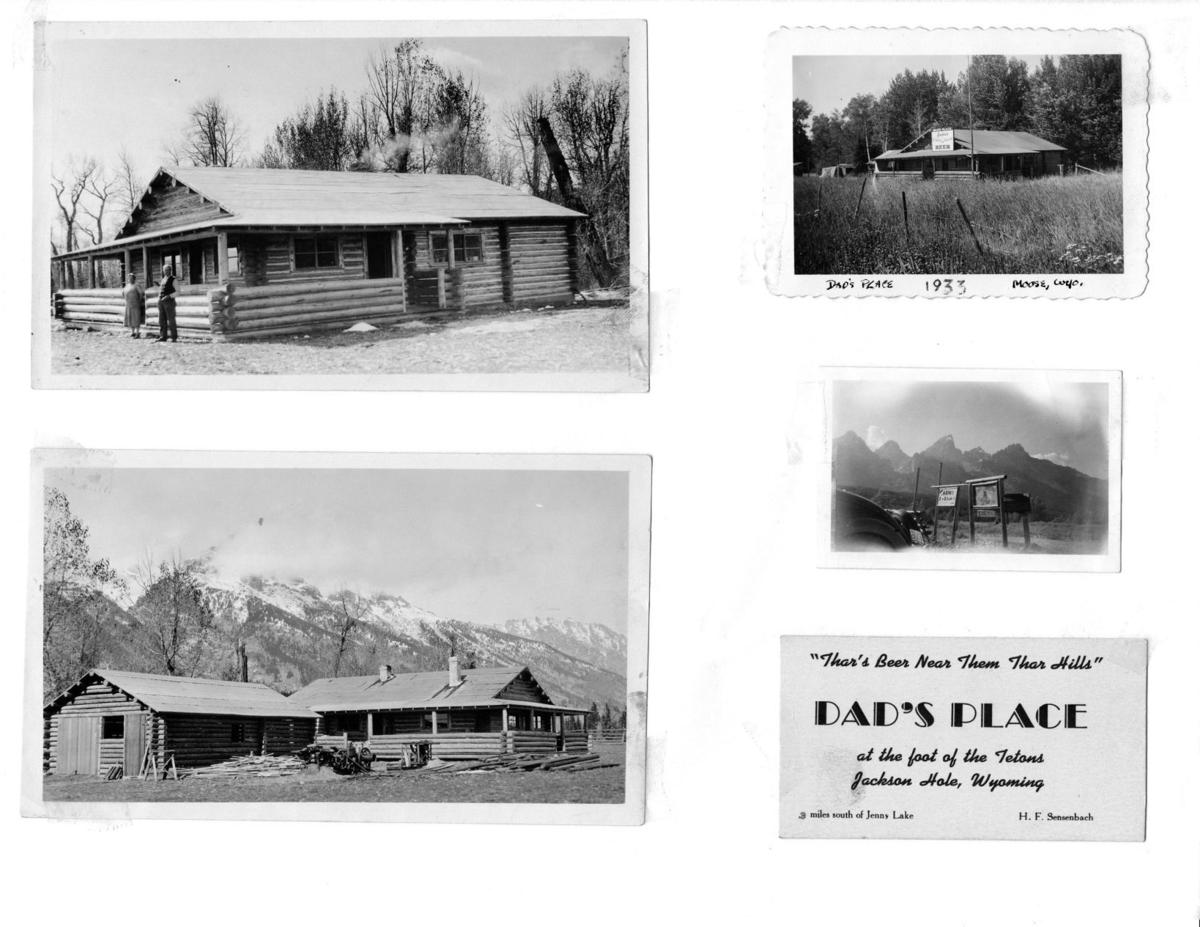 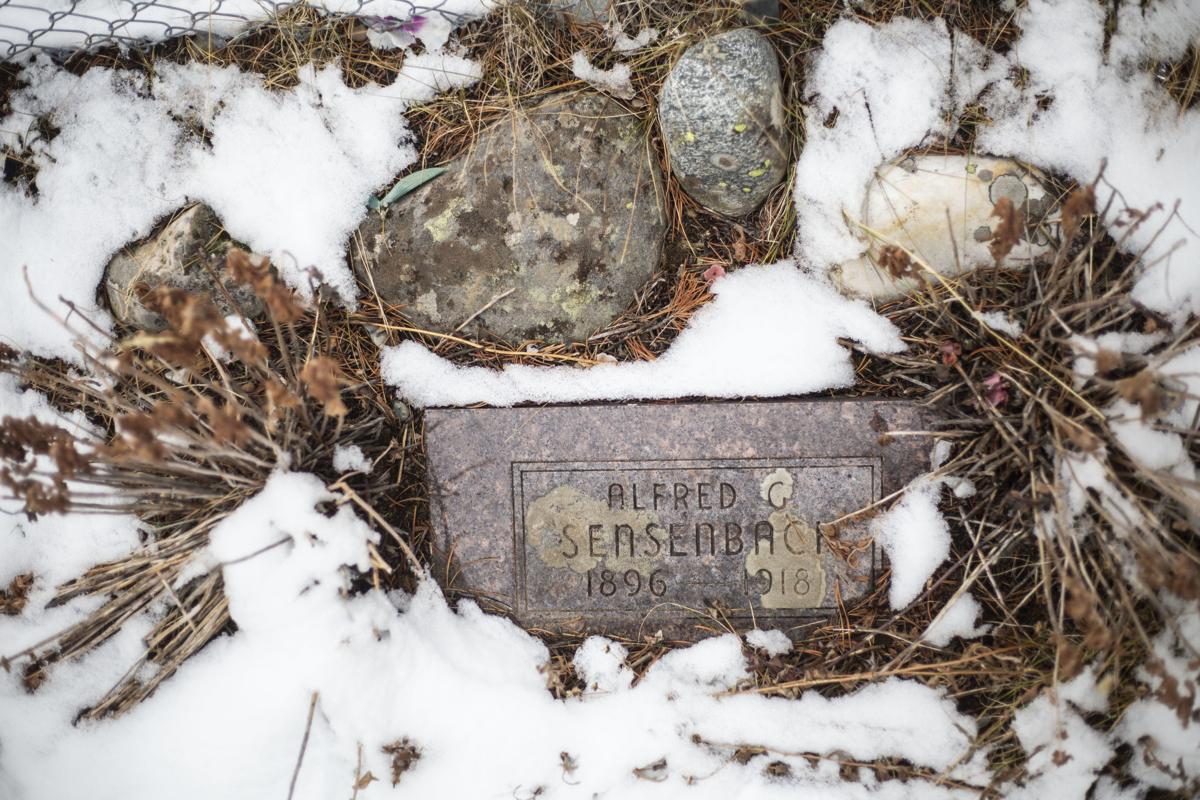 Snow covers Alfred G. Sensenbach’s grave. He was buried at the foot of Timbered Island in 1918, 11 years before the founding of Grand Teton National Park. 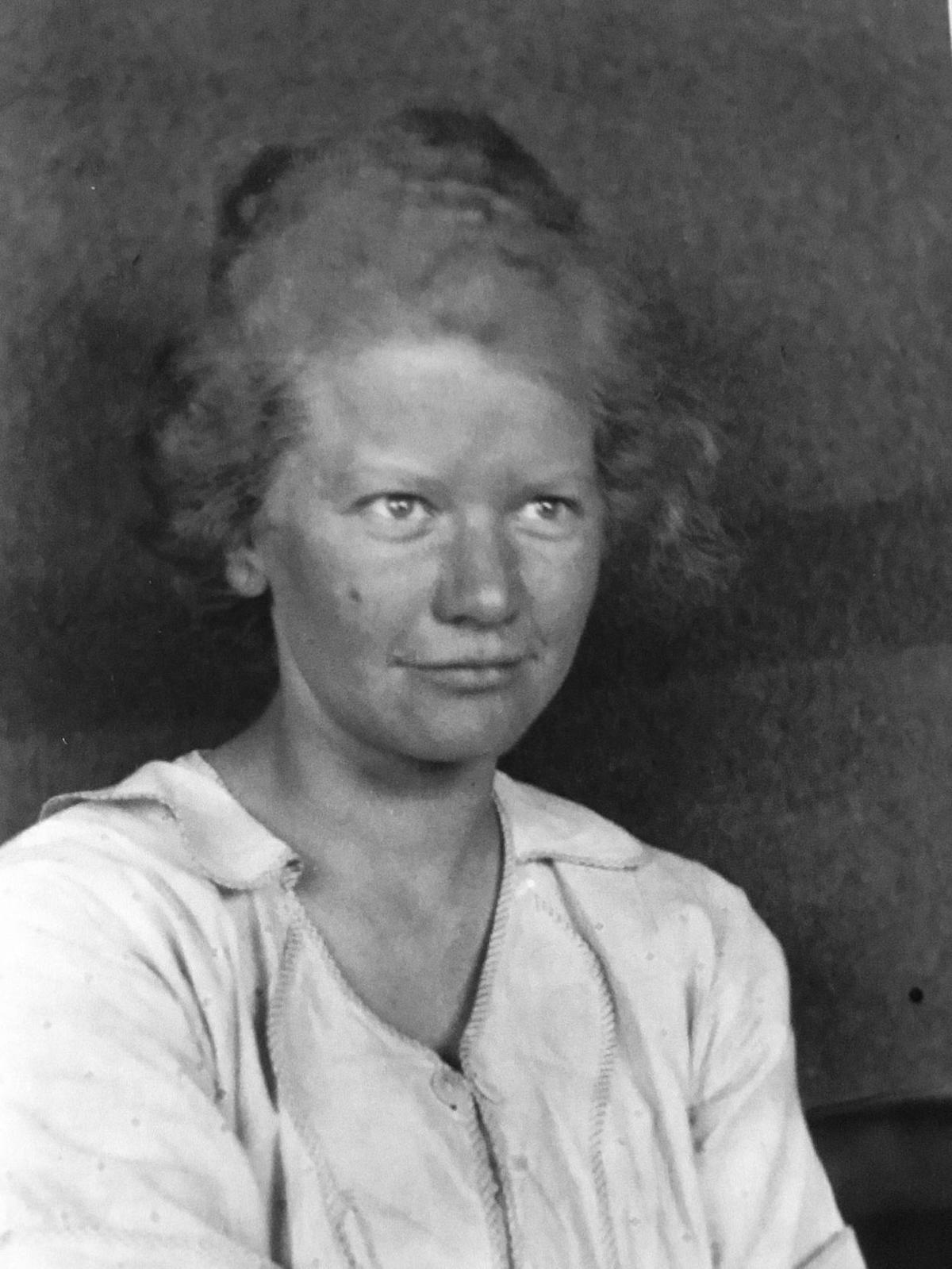 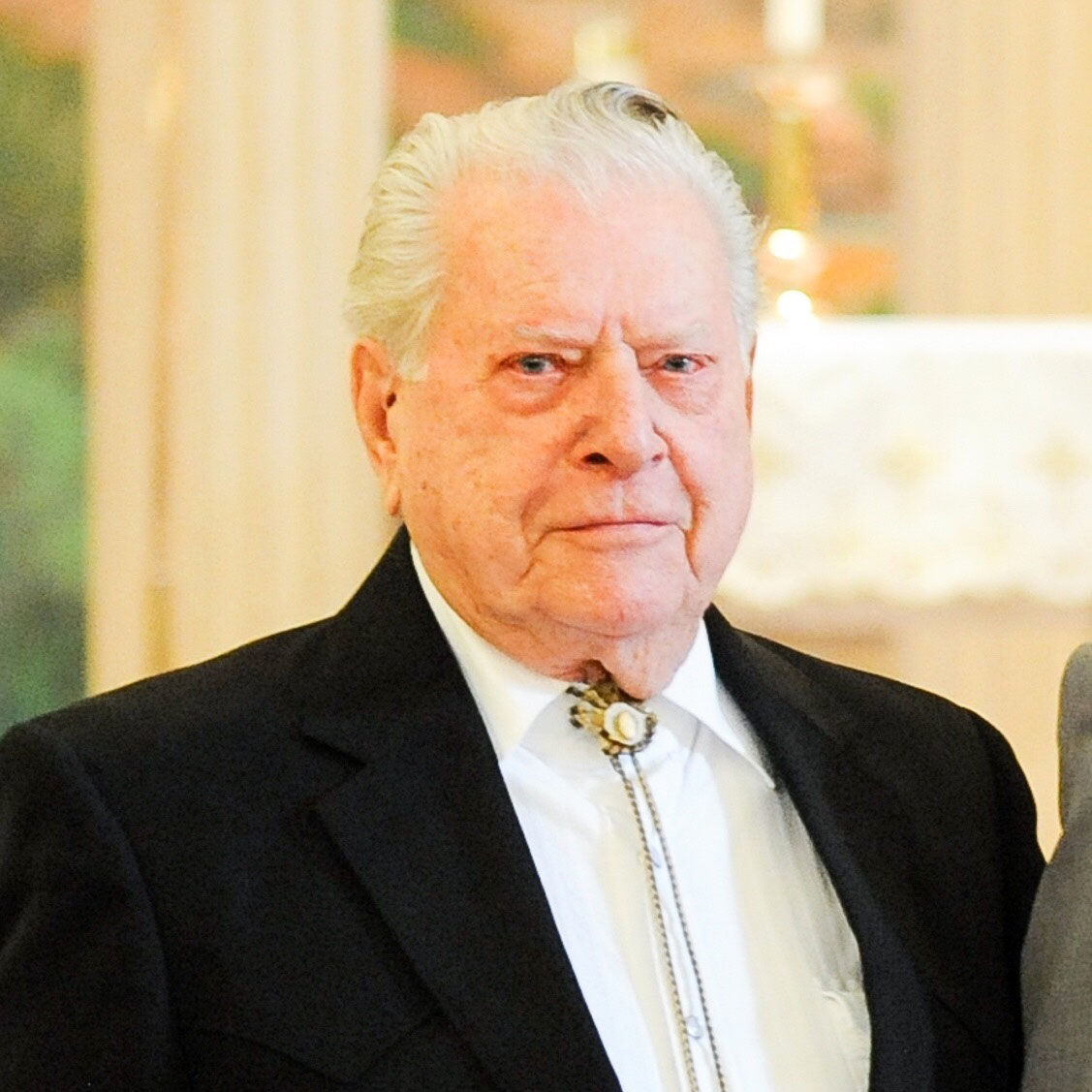 The grave of Alfred G. Sensenbach, who died in 1918, sits at the western foot of Timbered Island in Grand Teton National Park.

The three photos at left show the Sensenbach homestead and above, Dad and Ma Sensenbach with their granddaughter, Mildred. Below, Lauretta Sensenbach sitting on a fallen tree on the homestead.

Snow covers Alfred G. Sensenbach’s grave. He was buried at the foot of Timbered Island in 1918, 11 years before the founding of Grand Teton National Park.

A hundred years ago Alfred G. Sensenbach left Jackson Hole to be inducted into the Army. He never came home.

He never even made it into the service. Instead, during a time when America was focused on the war against Germany and was under siege by the great worldwide influenza epidemic, his death was a conjunction of the two great disasters. Reporting to take the oath in Kemmerer he was told the war was over and the draft didn’t need him. Alfred went to visit friends in Rock Springs, where, a week past his 22nd birthday, he died Nov. 23.

The headline on page 1 of the next Jackson’s Hole Courier said: “A.G. Sensenbach Victim of Pneumonia.”

This week it’s a century since he died, and next week is that long since he was buried on his family’s homestead near the south end of Timbered Island, in what’s now Grand Teton National Park. His grave is still there, alone, surrounded by a chest-high chain-link fence erected by Post 43 of the American Legion. That replaced a wooden rail fence that had been there.

“He went down to Rock Springs. He had gone to some school there. He went down, got that flu bug — the epidemic — and he died,” said Charles Carlson, a nephew born five years after young Alfred died. “They shipped him up by railway to Victor and by wagon over the pass to Jackson Hole.”

The Courier reported that Alfred “went out to Kemmerer in response to his draft call, but, the armistice having been signed, he was released” and went on to Rock Springs.

Alfred’s death stood out even in a Jackson that had sent others to the war and that was battered by influenza at home.

The newspaper story said Alfred “was stricken with pneumonia, the disease very quickly claiming him its victim, so that the news of his death came without warning and was a great shock to relatives and friends.

“He was a splendid young man of admirable character and habits, and his death, coming when he was just on the threshold of manhood, brings general sorrow,” the unnamed reporter wrote.

Though Jackson Hole was a tiny town, it wasn't left untouched by World War I or Spanish Influenza. Read the full story on Jackson in 1918 here.

When the Spanish Influenza swept around the world in 1918 it was the worst blow mankind had taken from disease since the Black Death of the 1340s.

An estimated half billion people were infected, and as many as 100 million died, including about 600,000 in the United States.

Even in a place like Jackson Hole, far from the world and with little traffic, the flu found its victims and dominated attention.

As the front page of the Jackson's Hole Courier said on Oct. 17, 1918, "Spanish Influenza is traveling through the country like wild fire, and the community is rare where it has not put in its appearance."

The Nov. 21 Courier reported the death of John Tanner, 3, "a beautiful, lovable little boy, the darling of the household where his sunny presence will be sadly missed."

A week later it was Gilbert McInelly, "a man of advanced years and feeble health" — he was 64 — who had two sons away in the Army.

Many others were reported sick.

First noted in 1917, and with the worst showing up in U.S. Army camps in the United States and France, the disease was unlike most flus. It often hit young adults and also didn't fade after a single season, but came back worse in the following year, 1918.

It was an emergency, even in Jackson, where state health officials met the Town Council in special session and "put in force some drastic rules and regulations" to slow the disease.

Schools were closed and parents were told to keep their children at home and off the streets. Public gatherings "of every kind are barred," the paper reported. Chairs and tables were ordered removed from "all places of amusement and from all hotel lobbies." Signs went up "warning the public to keep moving."

There was a ban on people entering town "from infected territories," including Idaho and Star Valley.

The Courier ran stories of local people afflicted, and most seemed to recover. But it didn't go so well with local boys who were away in the service. Included in the bad news received by families in Teton County just in October was:

• Pvt. George Edward McKenzie, of Wilson, age 25 and a member of Evacuation Ambulance Co. No. 36, died Oct. 17 at Fort Riley, Kansas. His funeral was held in the front yard of Abe Ward in Wilson. He left a wife of four years, his mother and father, a brother and  six sisters.

• Coxswain Ed Sheffield, of Moran, died at the U.S. Navy base at Charleston, South Carolina.

• Sgt. Lloyd Reed, 26, of Jackson, died at Fort Benjamin Harrison, Indiana, where he was assigned to Co. C, 2nd Provision Cotillion, Engineer Corps. He was a member of the IOOF Lodge and "one of his country's most ardent patriots," whose death by flu made him "no less a hero than the most courageous soldier at the battle's front, and his sacrifice was supreme." He left his parents, a sister and three brothers, one of whom was "now fighting in France under the Stars and Stripes."

• Pvt. Curtis Ferrin, dead of "bronchial pneumonia" while serving "somewhere in France," the Courier wrote. The Ferrin family "had had no previous word of any illness of their son, and the sudden news of his death elicits the keenest sympathy of all their friends," the paper said. "The one consoling fact remains that he died a hero's death doing his part manfully in the great war for freedom and right." The family ranched in the north end of the Hole. Curtis, 24, was the oldest child of his parents; he had seven brothers and four sisters.

In most cases, especially when the men died in the United States, the bodies were shipped home. As the Courier noted in the story about Smeykal, in each case the funerals "on account of the quarantine existing in town, were held in the open air."

Around the United States the worst of the flu passed by January, after running its course over about four months.

The Wyoming Board of Health estimated flu deaths at 700 at a time when the state population was about 180,000. The population of Jackson at the time was about 300.

The toll of the war

The United States entered the war in April 1917 and instituted a draft in June.

The first draft raised nearly 3 million men age 21 to 30. But that wasn't enough. The Sept. 5, 1918, Jackson's Hole Courier announced that on Sept. 12 a new draft registration would be held, one that required all men  aged 18 to 21 and 32 to 45 to sign up. The story said there were an estimated 13 million men in the new categories, that the "draft boards will discard the unit, those with large families and those in war industries."

The exclusions would still "leave a gigantic army of determined men who are ready to rid the world of the menace of the Huns."

The Courier story about the new draft said the goal was to raise another 2 million men. Gen. Peyton March, Army chief of staff, told the press that "with an American Army of 4,000,000 men we can to through the German line wherever we please."

That tough-talking patriotic attitude was common among Americans.

C.C. McKahan wrote in August that he and his buddies were "raring to go" and "anxious to get to the front and keep the Boche on the stampede, as they have been for the last month.

"I am proud to be an American and a native born citizen of the United States of America, the nation whose sons and wealth will decide the war as they desire."

McKahan was optimistic, though not as optimistic as it turned out to be warranted: "We can begin to see the end of this bloody struggle. Every sign points to the opinion that the end will come before next July 4th." The armistice actually came just about three months later.

Others news from France was more mundane.

Jackson resident Almer Nelson wrote to his parents in September to report his unit was marching 15 miles a day toward the front, each carrying a 60-pound pack.

"It's raining here this morning," he wrote, "and I am sitting in my pup tent using the back of my mess kit as a table and writing these few lines to you."

The additional men ordered to sign up for the new draft were never needed, but those who answered the call earlier paid a price. Even in a small community like Jackson Hole, the pain was felt.

• Ercil Ward, of Wilson, wrote what the Courier called a letter of "cheerful tone" to say he was OK after being wounded. A followup printed in the Courier said that "he had to have his left arm amputated at the shoulder." He dictated his letter to nurse to tell his parents to he had "captured, myself, three Germans."

• Clement Porter, of Rexburg, Idaho, had worked as a printer at the Courier and was wounded Aug. 4, "being struck in the leg by a piece of shrapnel which tore the flesh and fractured the bone."

• Another former Courier employee, Robert Dalley, went on to ranching before being drafted and going to France, where he was "struck in the head by flying shrapnel."

• Pacific Creek homesteader Dave Ferrin was reported "recovering from a wound in his arm which he had received in action."

• George Clark, of Moran, was listed "as being severely wounded."

• Jasper Paulson, who had worked in the Hole, went to France with a machine gun company and "was badly wounded in the face, his nose having been shot away."