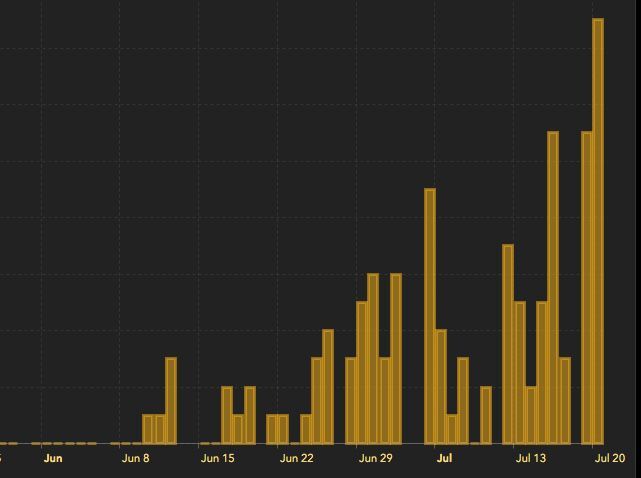 The number of laboratory-confirmed COVID-19 cases seen in Wyoming since the illness was first detected in March grew by 62 on Monday, the highest single-day increase since the pandemic began.

Fremont County continued to have the highest number of lab-confirmed cases reported since mid-March, 374; Laramie County had 261; Teton County had 187; Uinta County had 181; Sweetwater County had 168; Natrona County had 153; Park County had 80; Campbell had 77; Albany had 60; Lincoln had 47; Washakie had 39; Sheridan had 31; Big Horn had 27; Carbon had 21; Converse and Johnson had 18; Hot Springs and Sublette had 11; Crook and Goshen had nine, Weston had four; Platte had three and Niobrara had one.

With the growth in new confirmed cases, the number of active cases in the state grew by 24 on Monday to total 513.

Laramie County had the highest number of active cases at 100; Fremont had 90; Teton had the third highest with 66; Sweetwater had 37; Albany had 31; Natrona and Uinta had 33; Park had 30; Big Horn had 19; Campbell had 17; Lincoln had 15; Carbon had 13; Sheridan had eight; Washakie had four; Goshen, Sublette and Weston had three, and Converse, Crook, Hot Springs and Johnson had two.

Niobrara and Platte had no active cases.

The active cases were seen in 432 people with laboratory-confirmed cases and 81 with probable cases.

Although 24 Wyoming residents have died as a result of the virus, two of those patients were living in Colorado at the time they were diagnosed with the illness, and they were not counted as confirmed cases in Wyoming.

The number of probable cases on Monday was set at 397. A probable case is one where a patient has coronavirus symptoms and has had contact with someone who has a confirmed case, but has not been tested for the illness.

The number of recoveries seen among the patients infected since the first case of coronavirus was 1,652, including among 1,336 patients with confirmed cases and 316 with probable cases.

Recovery is considered to have occurred when a patient has gone three days without a fever and has seen improvement in respiratory problems.

Thayne July 4 Parade 2020. Packed. Number of people wearing masks could be counted on 1 hand. Yet no significant spike in Lincoln County... hmmm...

Thanks for your comment. Another reader asked that we mention that cases in Lincoln County have risen 41% since July 4th, going from 34 on the 4th of July to 48 as of Wednesday, July 22 (stats verified via State of Wyoming public health's Lincoln County dashboard.)