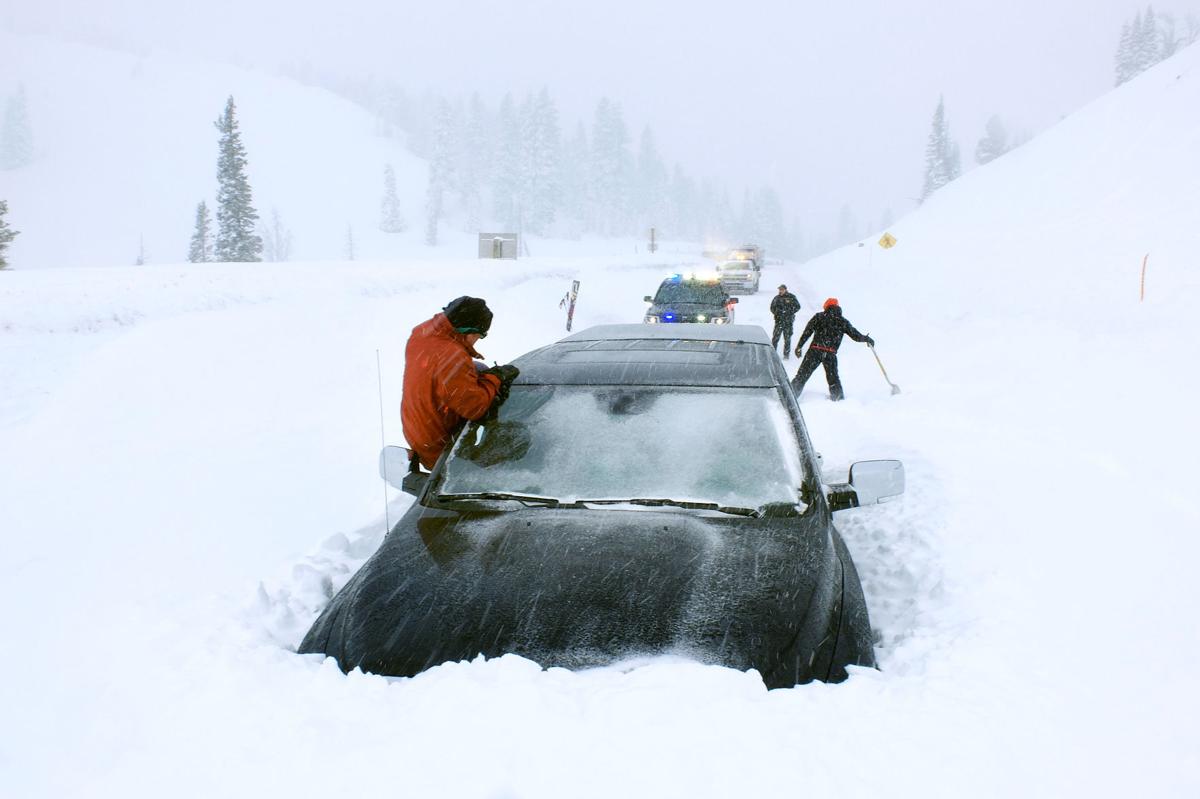 Brian Siegfried crawls out of his Dodge Ram truck after driving into a small avalanche that slid in front of him Friday morning on Teton Pass. A pair of snowboarders triggered the avalanche at the base of Twin Slides, depositing about 4 feet of snow on Highway 22.

Brian Siegfried crawls out of his Dodge Ram truck after driving into a small avalanche that slid in front of him Friday morning on Teton Pass. A pair of snowboarders triggered the avalanche at the base of Twin Slides, depositing about 4 feet of snow on Highway 22.

UPDATE 3:30 P.M.: WYDOT technicians are still waiting on skiers to return to their cars at the summit of Teton Pass in order to finish avalanche control.

“It just isn’t safe,” said Bruce Daigle, a foreman with the Wyoming Department of Transportation. “We can’t set off bombs with people out there.”

Daigle said they won't reopen Highway 22 until after avalanche control is finished, meaning it could be another four to six hours before Teton Pass reopens.

"Unfortunately the snowboarders caused all these issues here by not following safe practices," he said.

The snowboarders who triggered the avalanche on Twin Sides Friday morning were apologetic.

This is a developing story that will be updated as the Jackson Hole Daily learns more.

ORIGINAL ARTICLE: An avalanche that witnesses said was triggered by two snowboarders covered Highway 22 on Friday morning, hitting a vehicle and causing officials to close Teton Pass for at least four to six hours.

Two snowboarders triggered the avalanche on Teton Pass just before 9 a.m., partially burying a truck on the highway.

“It buried a Dodge pickup right up to the bottom of the driver’s side door,” said Bruce Daigle, a Wyoming Department of Transportation foreman. “It completely covered the road.”

Jackson resident Brian Siegfried was driving eastbound when the snow started tumbling down toward him.

“I saw it a second before it got there,” he said. “It was enough time to see if I could get on the other side of it but then it was just too much and the truck was stuck.”

Siegfried’s truck got buried in snow, enough that he couldn't get his doors open.

“I crawled out the passenger side window,” he said.

Siegfried was also there to ski but had to turn around and was heading back to Wilson because there weren’t any parking spots at the top of the pass.

His first concern was that someone might be buried in the debris.

“I looked up above and saw the snowboarders and was able to communicate with them,” he said. “I asked them if anyone was buried and they said no.”

No one was injured but it’s going to take some heavy machinery to get Siegfried’s truck out of the snow and to clear Highway 22 of debris, officials said.

The following are the News&Guide's top posts from our Facebook page with the most engagement from each month in 2018. They include some of…

Hey all. We live in a community of people who do what they love-outdoor activities and with all of these come risks. Yes, we should educate and learn always but sadly and unfortunately choices and decisions we make every single day sometimes have bad affects. When a mountain guide slips, when a skier OR snowboarder OR snowmobiler sets an avalanche, when a raft flips in the Snake. It happens as it will and we need to support our friends. No offense but how about instead of making thumbs down and negative comments we support our friends and pray to God next time it doesn’t happen to somebody you love, because I’m sure then your reaction would be different. Happy skiing Jackson Be safe!!

Time for WYDOT to prioritize snowsheds instead of another runaway truck ramp. This incident will help them realize that.

The USFS loves snowboarders. They will not be prosecuted. Had these been snowmobilers, they would be sentenced to death by lethal injections.

The snowboarders need to be charged for not following safe practices. Someone could have died.

No updates from WYDOT on tentative opening time. It’s 2:53.

I think it’s high time the State HWY Dept takes action in how they manage all the skiers on top of the Pass. They should create a parking pass or per user fee to ski. The amount of money loss in not being able to go to work or drive around because two people wanted to have have is selfish on there part. They should have to reimburse all that money.